Japan Announces the 2021 Kanji of the Year, Reflecting Hope at a Dark Time

Japan Announces the 2021 Kanji of the Year, Reflecting Hope at a Dark Time

This year, according to the kanji, the Olympics beat the pandemic in the minds and hearts of Japan.
At the end of every year, the Japan Kanji Aptitude Testing Foundation polls the people of Japan to find  one kanji (Chinese character) that represents the last twelve months, summing up the last 365 days or remembering an important event that defined the year. The beauty of kanji is that just one character can carry meanings both concrete and abstract, making the selection rather more poetic than what a single English word might be able to convey. Of course, with thousands of kanji making it into the standard Japanese vocabulary and thousands more showing up on occasion, it's hard to know what concensus the general public will come to. The year of 2021 had its ups and downs as a full year of the COVID-19 pandemic, and the country saw waves of infection, major events, and plenty of changes big and small. So, after reviewing the submissions of thousands of people across the Japan, what kanji did the Japan Kanji Aptitude Testing Foundation decide on for 2021?

The 2021 kanji of the year.
Image Source: Mainichi

The final decision for the 2021 kanji of the year was "金" ("kin"), a kanji that can mean money or even Friday, but at its core (and most importantly), means "gold." And of course, "gold" is the reason why this character was chosen this year! For readers who haven't caught on yet, this is actually the 4th time that "kin" has been chosen since this kanji tradition began in 1995. The years 2000, 2012, and 2016 were also given their own "golds," each of which was an Olympic year, just like 2021 ended up being.

Despite the ups and downs that came with the spread of the COVID-19 delta variant, and then the omicron variant. Despite the national borders that have been closed and opened, and then closed again. Despite all this, Tokyo managed to pull off a unique summer Olympic Games, one with almost no spectators and strict safety policies, but also one where Japan excelled at sports both new and old, and Japanese athletes were able to earn quite a few gold medals. Of course, the public reaction to the Tokyo 2020 Olympics was not all sunshine and roses, and many locals were furious with the government for going through with the games in the end. But for others, the event was a refreshing bit of happy news in the middle of a pretty tough period of time, and even a golden beacon of hope. 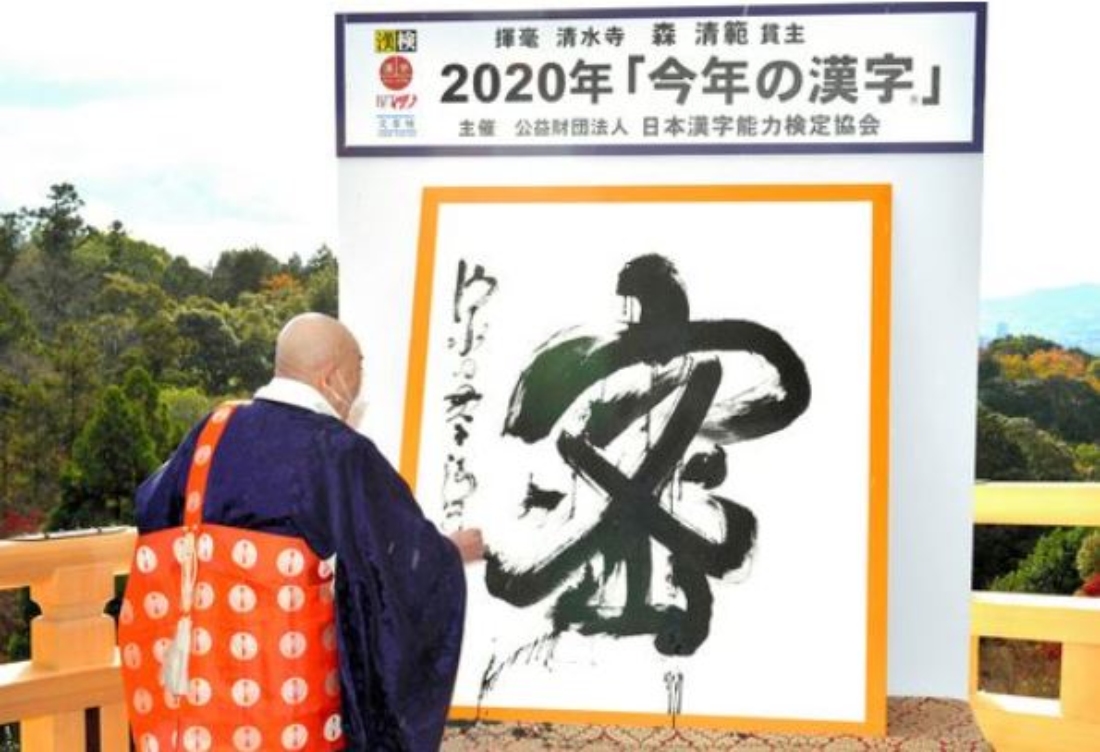 From the 2020 kanji of the year announcement ceremony.
Image Source: Asahi

Of course, the kanji of the year tradition hasn't escaped totally unscathed by the wrath of COVID-19. This year the Olympics stole the show, but in 2020, there was no avoiding that it had became "the year of pandemic." The kanji chosen for 2020 was "密" ("mitsu"), which means crowded or dense - a clear nod to the policies Japan and other countries have enacted in reaction to the pandemic, particularly Tokyo's "3-Mitsu" campaign asking people to avoid close contact and crowds.

With omicron now on the loose, but countries still opening their borders, medical developments that many hope will make a lasting impact, and of course innumerable other events coming up soon in the year 2022, it's impossible to know how we'll remember it once it's over. At least we know we can count on the Japan Kanji Aptitude Testing Foundation to find out what the public is thinking, and sum up the year for us once again next December!