Wander the Old-Fashioned Streets of Sawara and Katori Shrine in a Colorful Kimono, All Near Narita Airport

Wander the Old-Fashioned Streets of Sawara and Katori Shrine in a Colorful Kimono, All Near Narita Airport

This Chiba sightseeing area close to Narita Airport is the perfect place to dress up in Kimono, walk along the canals, and visit one of Japan's oldest shrines.

Strolling the Streets of Edo-Era Sawara

While most travelers tend to travel straight from Narita Airport to central Tokyo, lately the Japankuru team has been exploring the area around the airport (which is actually in Chiba Prefecture), to report back on some of the best sightseeing spots close by! Not so long ago, we wrote all about nearby Boso no Mura, an open-air museum of old Japanese buildings with traditional crafting workshops and retro Japanese dress-up, as well as the samurai houses in Sakura, where you can walk bamboo-lined paths while cosplaying as a samurai. But if your outfit of choice is a classic, colorful kimono, and you'd like to spend the day exploring charmingly old-fashioned streets and visiting ancient shrines, Sawara is the place to be! 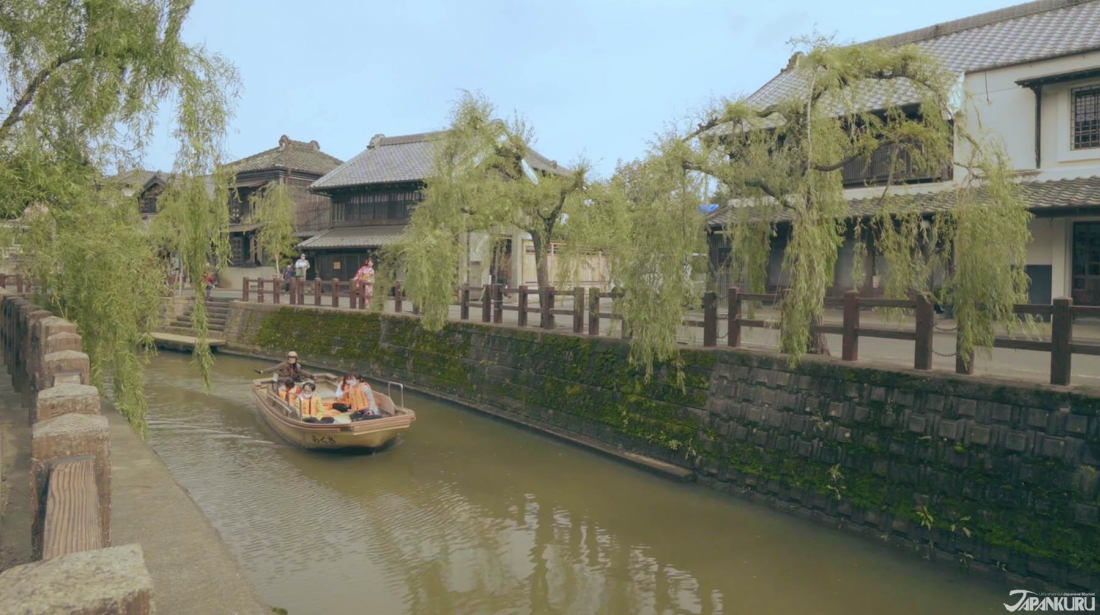 If quaint streets lined with old-fashioned Japanese houses straight from the Edo period (1603-1868) sounds like a dream come true, there are fortunately a few different options to visit around Japan! Among them, there are somewhat out-of-the-way destinations like the teahouse streets of Kanazawa or Nagano's Naraijuku, but closer to Tokyo, three of these old-fashioned spots are called the three "Koedo" (小江戸), little Edos. These retro destinations are the always-crowded Kawagoe, Tochigi City, and finally Sawara, which is now a part of the city of Katori.

Sawara has a long history as a community built along the river, and archaeologists have unearthed ancient structures from the Jomon period (14,000-300 BCE) and Kofun period (300-538CE) burial mounds in the area, containing artifacts that show that locals have been living there by the water for millennia. Of course, the small-town atmosphere found today doesn't quite reach back that far! Sawara became a port by the Nara period (8th century) as goods were moved through the area on the water and pilgrims visited nearby Katori Shrine, and a prosperous little city had grown up around the Ono River by the late Edo period.

Quite a bit of the city has stuck around for the past few hundred years including a number of historical buildings that are still quite well preserved. Visitors can still check out the former residence of Tadataka Ino, the first cartographer to create a complete map of Japan! Sawara was the first area in the Kanto region to be selected by the Japanese government as a "Preservation District for Groups of Traditional Buildings," and walking the streets, you'll see plenty of old houses and family businesses that have been handed down for generations since the Edo period. 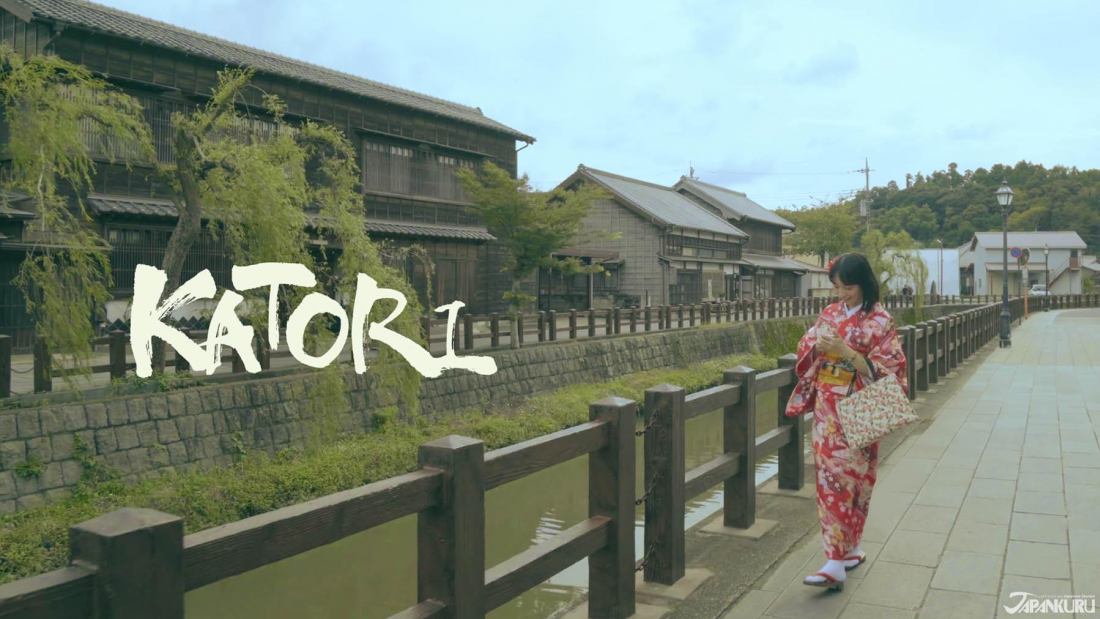 Present-day visitors to Sawara can walk along the banks, or even take a little pleasure cruise on the Ono River itself, to experience the city from the perspective of the many workers who passed through the waters for hundreds of years. Because of the notably high river banks and the willow trees hanging down over the water, the view from the boats is quite different from that in Tochigi City, where travelers can also spend time on the river.

Crossing over the water is interesting as well, thanks to Sawara's popular "Ja-Ja Bridge" (officially known as Toyohashi Bridge). Originally built almost 300 years ago, its purpose was initially as an irrigation and drainage channel with water flowing through the bridge (under the footpath). Every 30 minutes, the water overflows from inside the bridge and spills into the river like a little waterfall, with a noise that supposedly sounds like "jaa jaa," hence the bridge's nickname. The wooden planks that people can now walk across were actually reconstructed in the 90s to keep the bridge in working shape, but from 9 to 5 every day, water is still released from the channel into the river about twice an hour. The 300-year-old sound of water rushing out of the bridge has actually been recognized by the government as one of the "100 Soundscapes of Japan"! 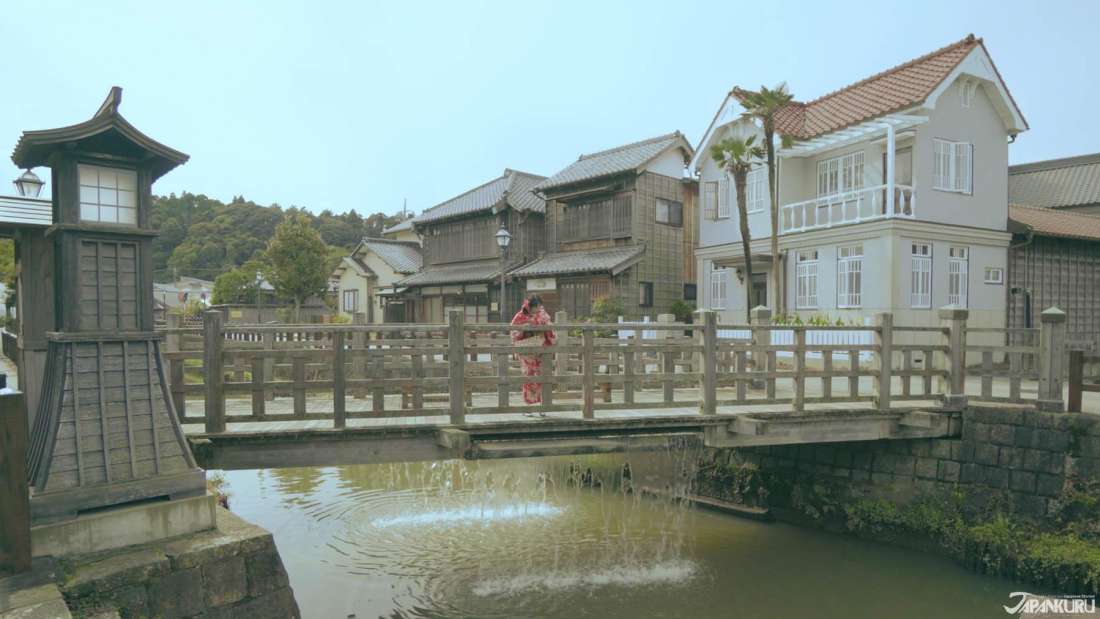 While you can certainly enjoy the lovely ambience of this little city in whatever outfit you might be wearing that day, we recommend putting on a kimono first, to add to the fun! When the Japankuru team visited, we rented a kimono at the Sawara Machiyakan, a tourist information center with rental facilities tucked in among the old buildings at the city center.

All dressed up in colorful kimonos, take a break in Hana Kanmuri, a little coffee shop transformed from an old antique hat shop, still full of vintage decorations and great atmosphere. 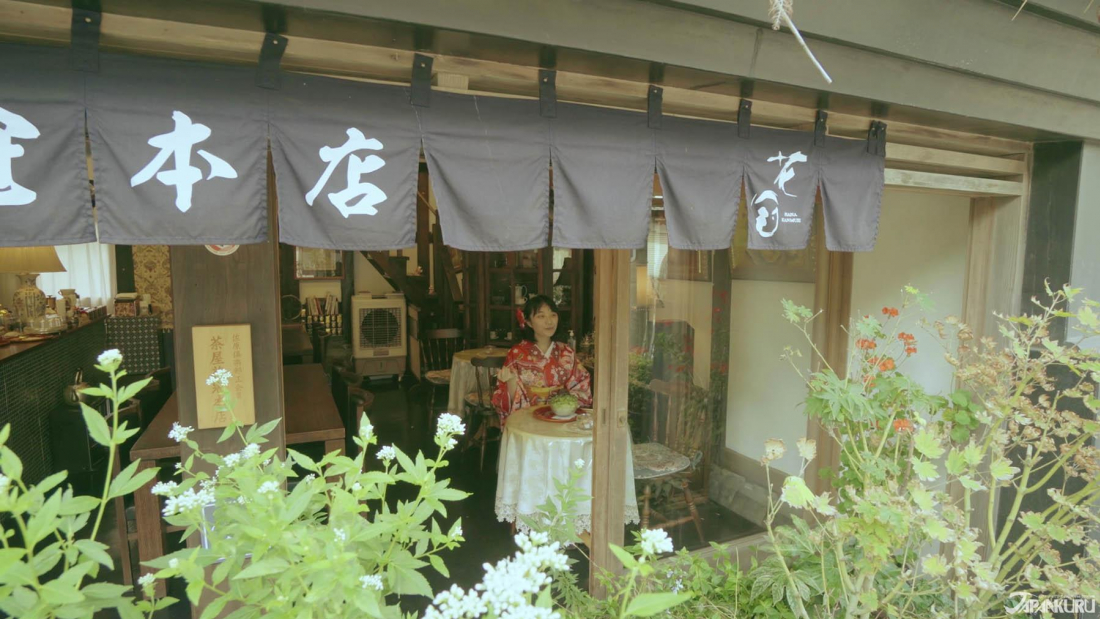 The shop is particularly known for their green tea shaved ice, made with Uji matcha and sweet anko red bean paste for a good bittersweet balance. It's prepared according to an old-fashioned recipe, so not only will you look the part seated among the old-fashioned decorations in your kimono, but you'll taste the part too! 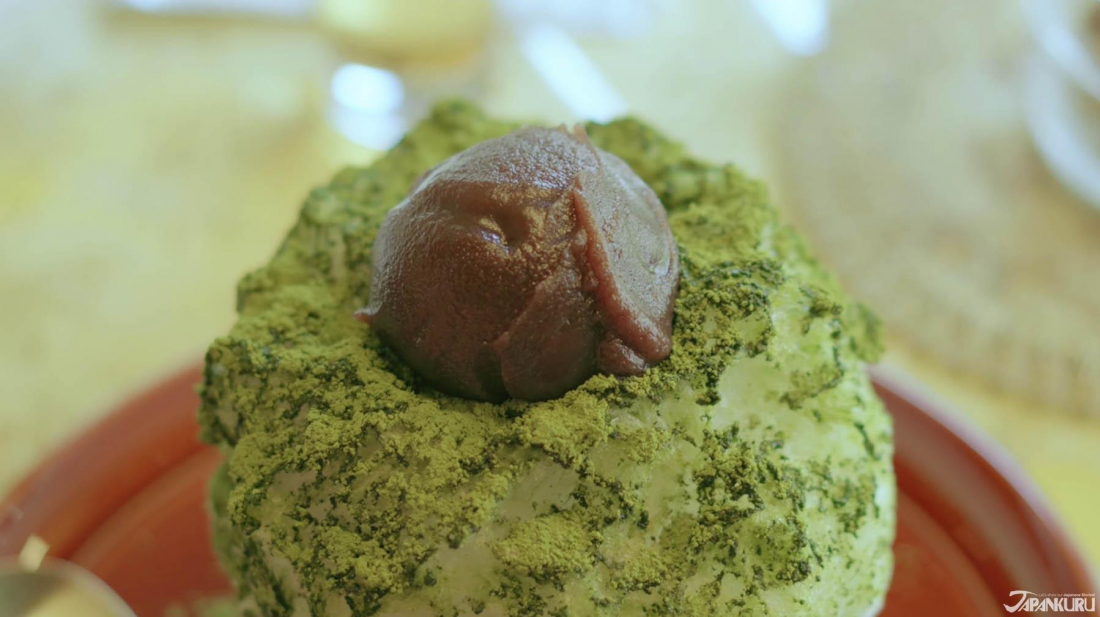 Hana Kanmuri (茶屋花冠本店)
I-1902-4 Sawara, Katori, Chiba
Official Website (jp)
In the Kanto region, there are three popular shrines called the "Togoku Sansha" (東国三社), or the Three Shrines of the East, that are both historically and culturally important to the area. Kashima Shrine and Ikisu Shrine each draw a crowd, but among the three, Katori Shrine (香取神宮, Katori Jingu) is particularly famous, as the head shrine of 400 or so Katori Shrines spread all across Japan. Some of nearby Sawara's prosperity is due to visitors passing through to visit Katori Shrine, just down the road. 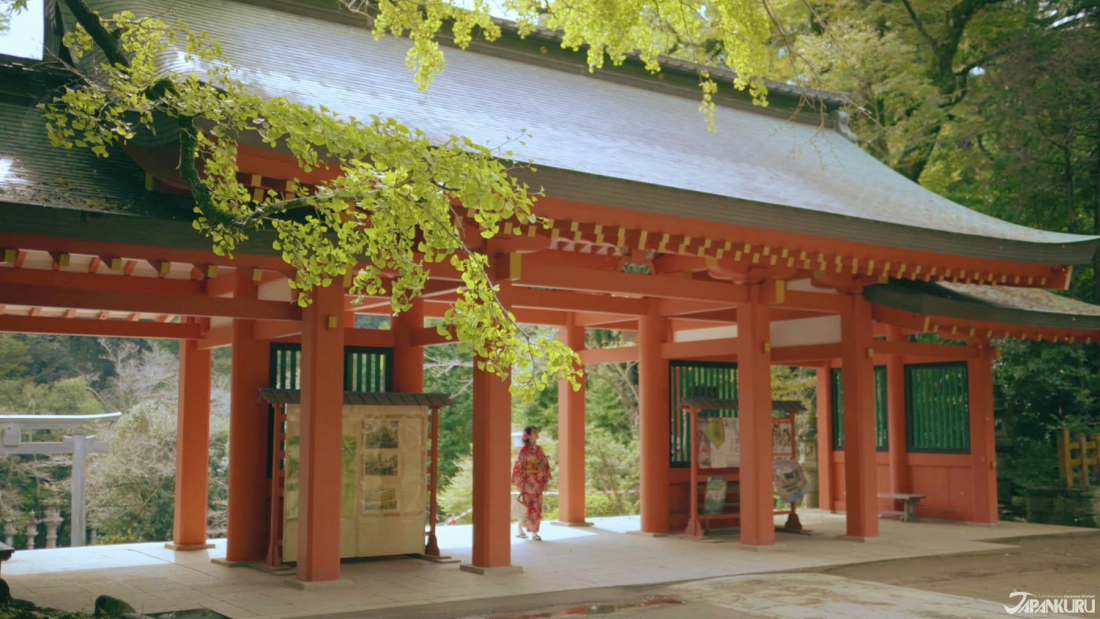 Katori Shrine is actually so old that its founding predates Japanese written history. Lore surrounding the shrine says that it was first established back in the time of Japan's legendary Emperor Jimmu, supposedly almost 2,700 years ago. Of course, the shrine buildings aren't nearly so ancient, but there are few structures that stick around for more than a century or two in Japan, due to a long history of earthquakes and other natural disasters. So the main shrine hall, constructed by the Tokugawa shogunate in 1700, is impressively long-lasting. Surrounded by towering ancient cedars at the top of a hill, the shrine's somewhat unusual black coloring makes it particularly striking! 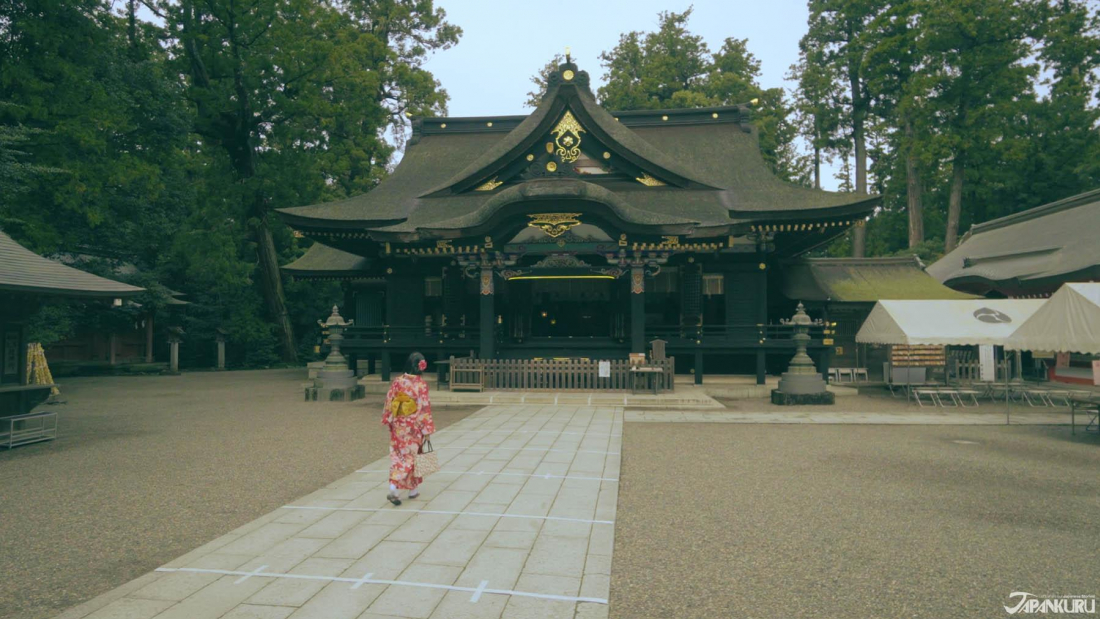 Katori Shrine is a quick bus ride from the streets of Sawara, but travelers who want to go directly to the shrine can also take a bus straight from Tokyo. Travel time is a little over an hour from Tokyo Station or Hamamatsucho Station.


Katori Shrine (香取神宮)
1697-1 Katori, Chiba
Official Website (jp)
Whether you're looking to experience the ancient atmosphere of one of Japan's oldest shrines at Katori Jingu, or explore the Edo-era streets of Sawara, this area is a wonderful place to see the beauty of Japan's history. And with a number of events and festivals happening every summer, it's a great place to enjoy the season.