Famous Japanese Festival in Tokyo in the Spring 〇◉ 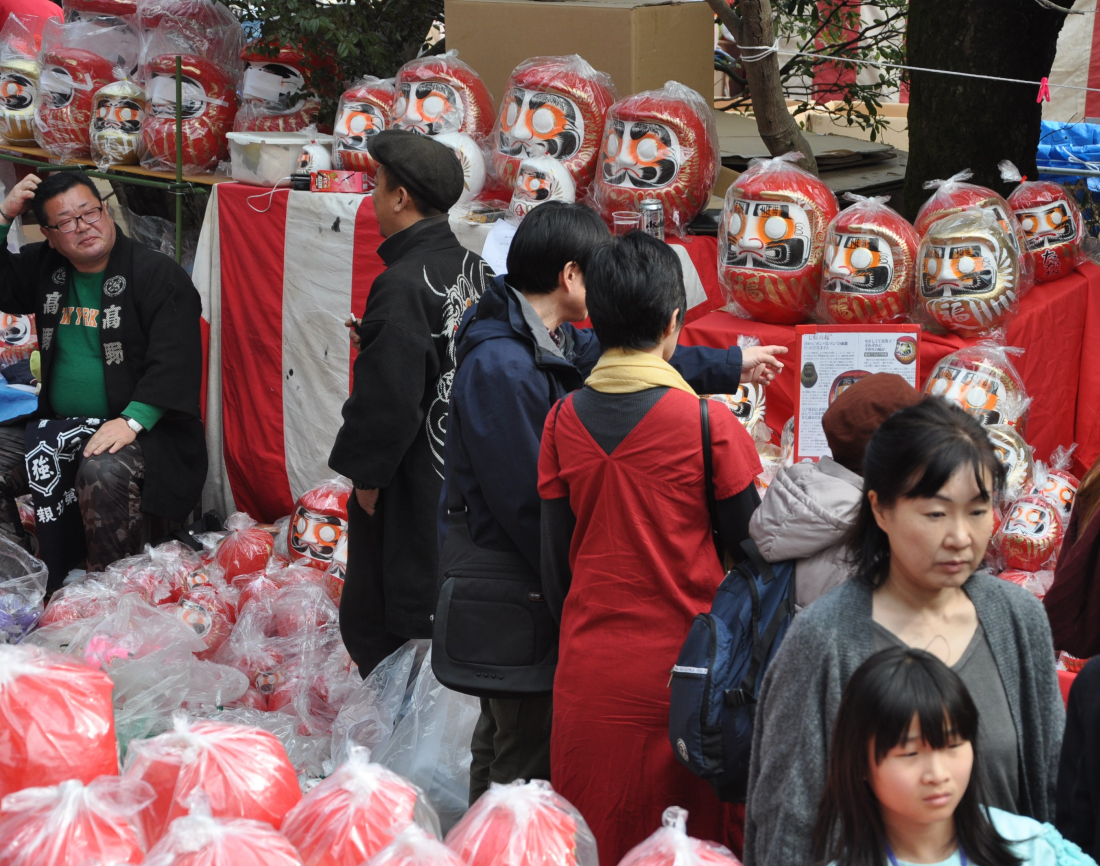 There really isn't a specific time to buy daruma, but they have been somewhat commercialized being New Year's charms. In that way, they are similar to New Year resolution charms.
An interesting fact about Japanesemedia, is that it is somewhat considered taboo to show a person's daruma on TV.
Our Japanese TV director friends told us the reason is that you are almost publicizing "to the world" that that person's wish hasn't come true yet. Same goes for daruma with both eyes filled, you won't see it because you are almost bragging about the wish coming true. We were really surprised to find out daruma are taken that seriously to some people. 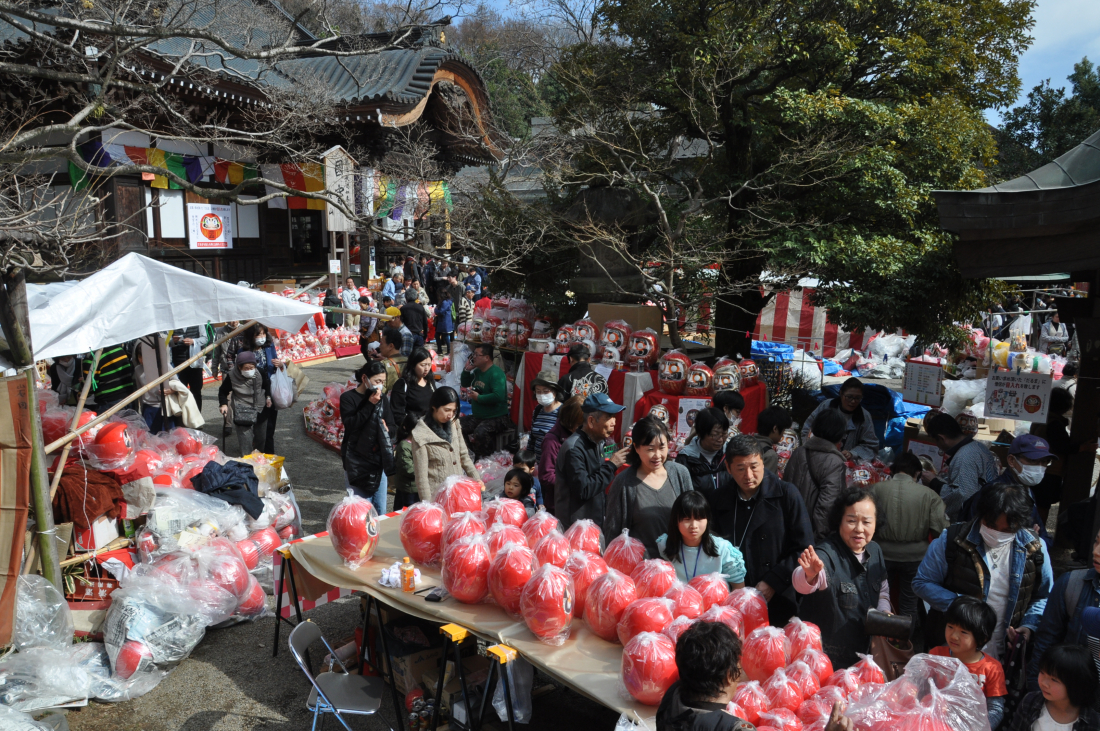 The Jindaiji Temple in Chofu, Tokyo is the second oldest Buddhist temple in Tokyo (the first being Sensoji Temple in Asakusa). Every March, Jindaiji holds a Daruma Doll Festival and people from all over come to buy an open-eyed daruma. There are about 300 stalls along and around the temple ground so people are sure to have a good time and find the daruma of their dreams.

Despite living minutes by bike from Jindaiji, this was our first time going to the festival. This year it was on March 3rd (Sat) and 4th (Sun) from 9am~5pm. We read that if you go around 2pm the Jindaiji monks will do some kind of performance called Oneri Gyoretsu, which is just the temple's monks walking around the temple while traditional music plays. I am more than certain we were there at 2pm, but we must have just not heard the music and missed it. Which is a shame but no big deal since we were just as entertained looking at all the daruma!!

There Were All Kinds of Daruma

❷
Made from Different Materials

Then for the pure purpose of decoration, there were a whole new version of daruma dolls. Japanese shiba, cute maneki neko, traditional bowl haircut girls... Even daruma representing the Chinese calendar...which were SUPER cute!🐍🐯🐵 However, with their eyes already being filled, it takes away the fun of filling them yourself. We noticed a leopard print daruma though and its eyes were still open like the traditional daruma. Being a lover of leopard print, I was super tempted to buy it but ended up not getting one. 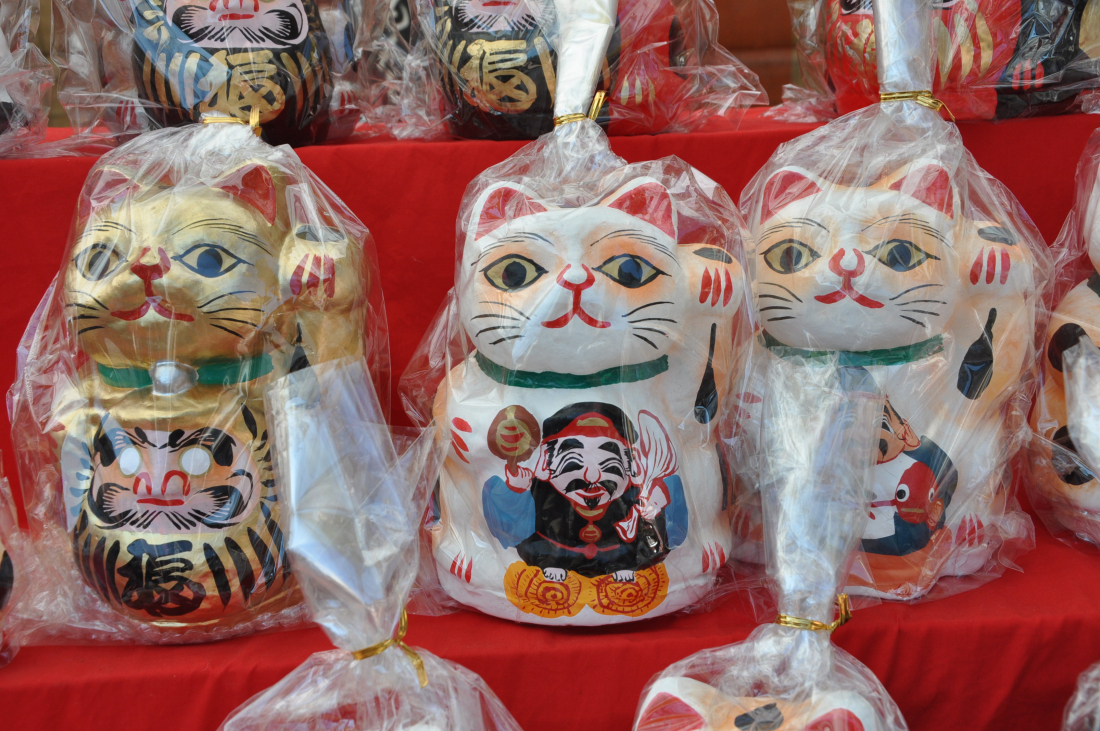 To take the maneki neko daruma a step forward, there were also these cuties.
Manekineko that had either Gods or daruma on their tummies.
If you think about it,
the maneki nekos bring good luck,
and so do daruma or Japanese gods,
so it's basically like
you're getting double luck.
We liked these maneki nekos but
we didn't like
how the darumas were smiling.
If they had a more stern face,
we would've gotten one.
It is still a cute idea though.

Everywhere you looked were daruma waiting to be sold. It's crazy to imagine each and every single one was handcrafted. What is evern crazier is some of the sizes people bought at the festival. Where do they put a massive daruma that is about the size of their child!?!?!?!

At the festival, if you bought a daruma, you could bring it over to a monk for the Daruma Kaigansho, or "Spiritual Awakening" (lit translated as "Eye Opener") booth. The monk will write the character 阿 (pronounced "ah") on the left eye which stands for the "O" in Oma, a sacred syllable in Buddhism that is said to be known as the beginning of things in life.
For those who had old darumas that they wanted to get their eye filled in because their wish came true, that was an option as well. Just line up and give it to the monks where they fill in the right eye with the character 吽 (pronounced "oon") which stands for the "m" in Om, standing for the end.  Once you got your old daruma's right eye filled in, it's customary to get rid of it. However, you just can't throw it in the trash or anything like that. You have to take it to a temple where they burn it. For that reason, there was a massive "daruma offering place" set up right in front of the temple. There you saw many people getting rid of their old darumas. 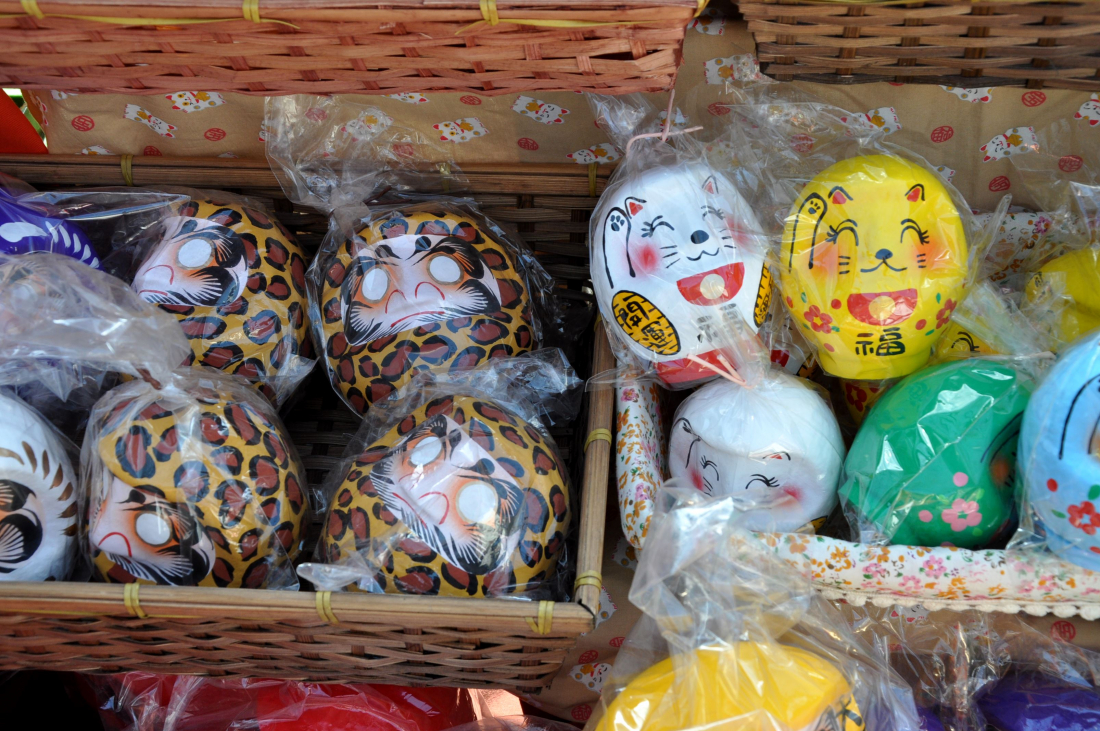 The Jindaiji Daruma Festival is every year on March 3rd and 4th.​

Daruma make wonderful souvenirs!
Regardless of your beliefs, it's something fun to do like a wishing well, and the daruma dolls have an interesting look to them. Now that I learned all the history and culture behind these dolls, I've become even more interested in them. So next time I get the chance to go to Gunma Prefecture, I plan on going to the daruma museum!