Twisting Shimenawa - A Piece of Shinto Tradition and Fukushima Culture

Twisting Shimenawa - A Piece of Shinto Tradition and Fukushima Culture

Ever wondered about the straw ropes found at Shinto shrines and in Japanese homes? Find out more about shimenawa! 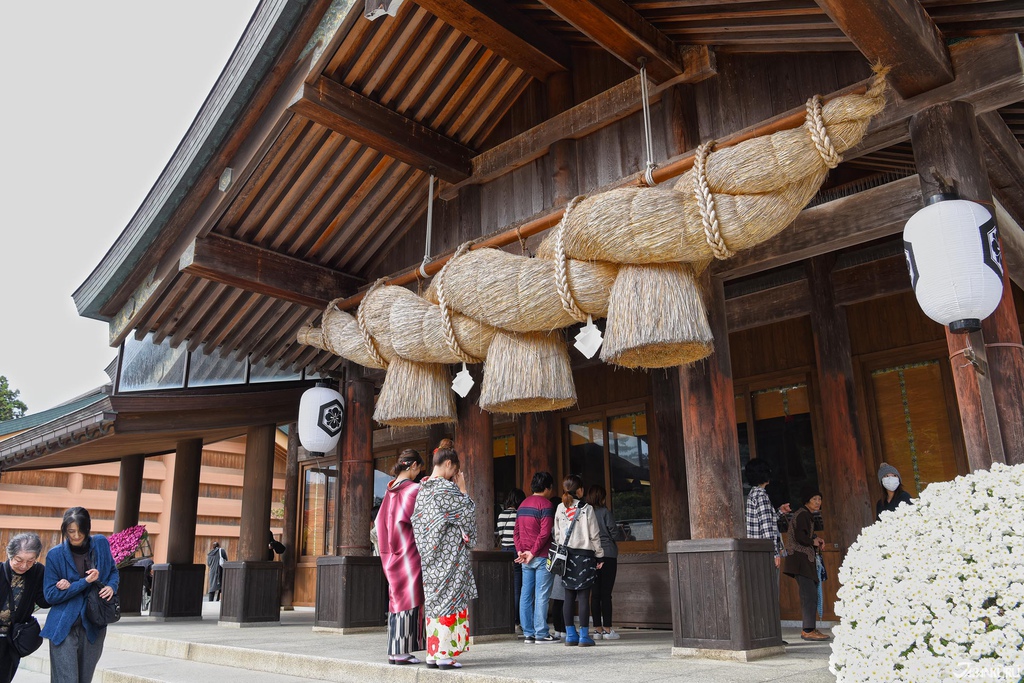 Shimenawa (しめ縄) are ropes made of rice straw and hemp, and thanks to their spiritual meaning in Shinto religion, they're found at Shinto shrines and in homes around Japan. Sometimes shimenawa symbolize purification, and often they're used to mark boundries between normal spaces and those that belong to the gods. The most recognizable shimenawa, especially for visitors to Japan, are the enormous ropes that hang in front of some of Japan's most important shrines. The shimenawa at the Izumo Taisha (出雲大社), perhaps the oldest shrine in Japan, weighs a whopping 5 tons! It's certainly hard to miss.

On a smaller scale, shimenawa are thought to ward off evil spirits, which is why you might spot one in a home or office as well. So, on a recent trip to Fukushima's bucolic region of Aizu, I rushed at the chance to participate in a shimenawa workshop run by local expert Kumiko Inomata, and make my own little safety charm to hang in the doorway of my tiny Tokyo apartmentーthe perfect way to get ready for a new year!

Shimenawa are generally made by twisting bunches of rice straw, specifically wild rice called makomo (真菰), and hemp, called seima (精麻) after being processed. If hemp doesn't seem like a particularly Japanese material, you might be surprised to find out that it's actually been used for spiritual purposes in Japan since long agoーto this day participants in certain Shinto festivals will wrap silky strips of hemp around their foreheads. 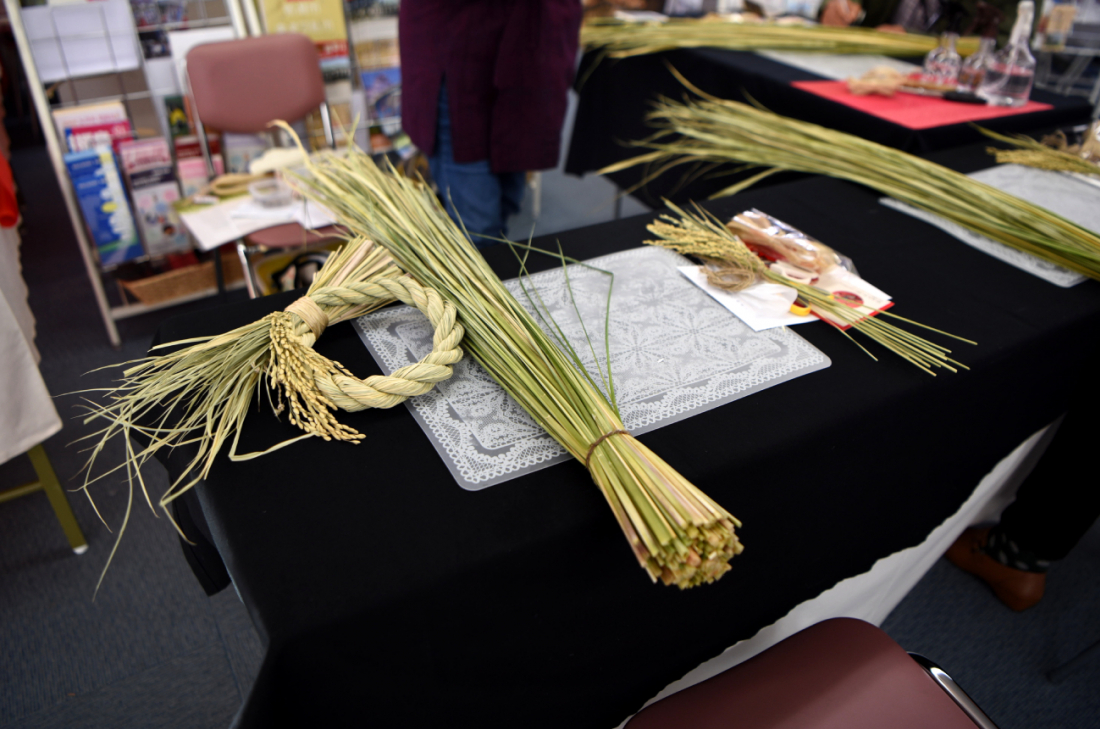 Fukushima's region of Aizu has its own connection to hemp, with a history of growing the plant for spiritual use. Unfortunately, despite the strong connection that residents still maintain with the history of Aizu, knowledge of this part of the area's history is lost to most locals. And that's where Kumiko Inomata comes in. Inomata is a craftsperson and a workshop leader in Aizu, who creates shimenawa and other Japanese crafts out of rice straw and hemp, and passes the knowledge on by teaching others. We started our workshop by learning all about the materials we would be working with, and why they were a meaningful part of Aizu culture. 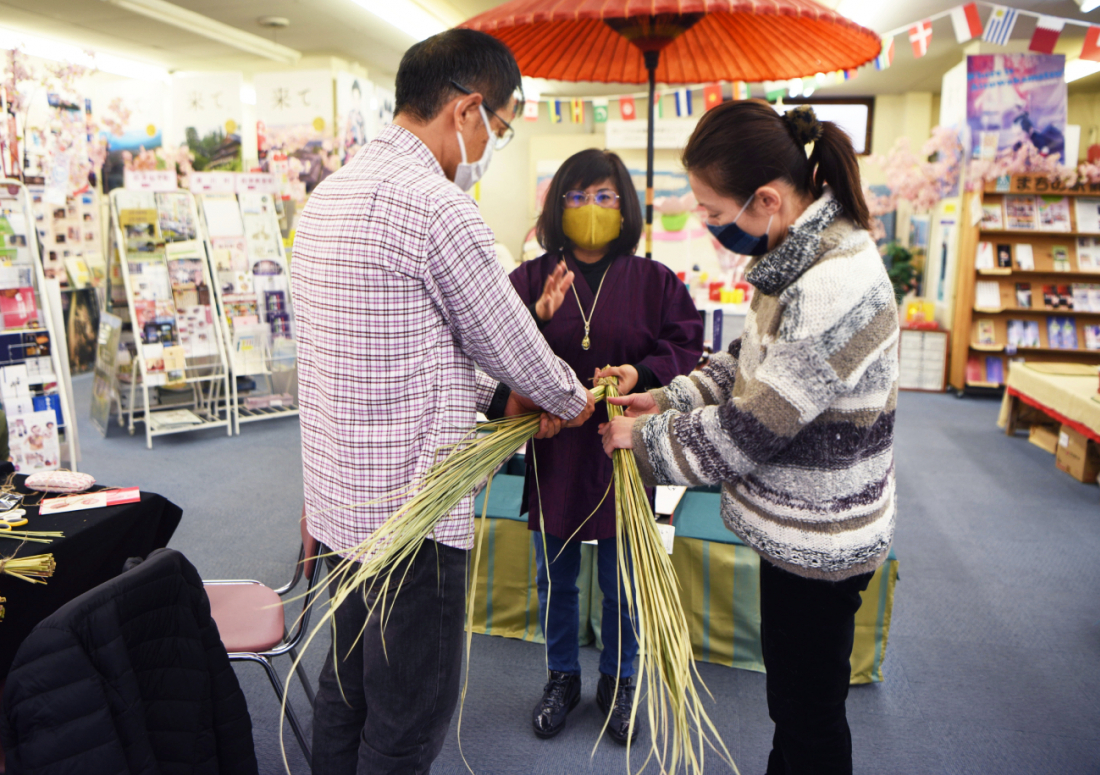 But before long, we started the process of making our rope! We began by carefully separating our bunch of rice straw into three parts, in preparation for twisting it into a shape called "gobo-jime" (ごぼう締め), literally the shape of a burdock root, which is long and tapered on one end. In groups of three, we took turns twisting two out of the three bunches of rice straw together, first creating a deceptively simple (and really somewhat difficult) twist with the dry plant stalks. In the meantime, we kept spraying the rice with water, so it wouldn't dry out completely and start to break! 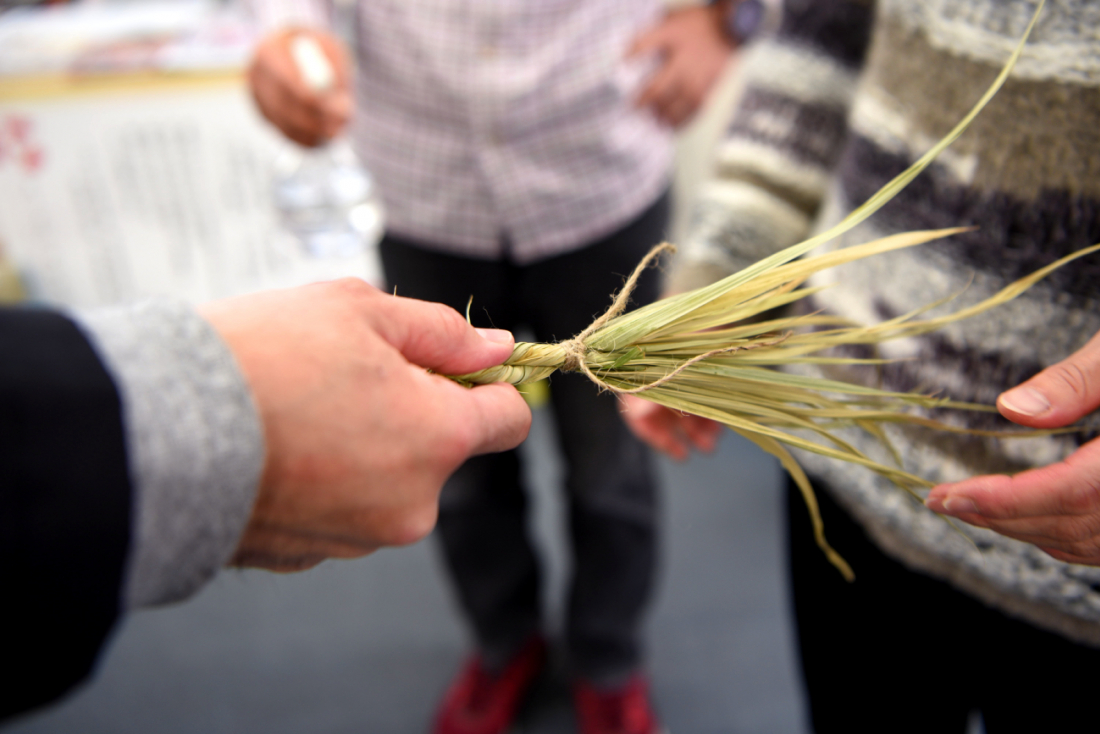 Each of us chose and guided our teammates on just how tight or loose we wanted the twist to turn out, giving each of them a slightly different look. 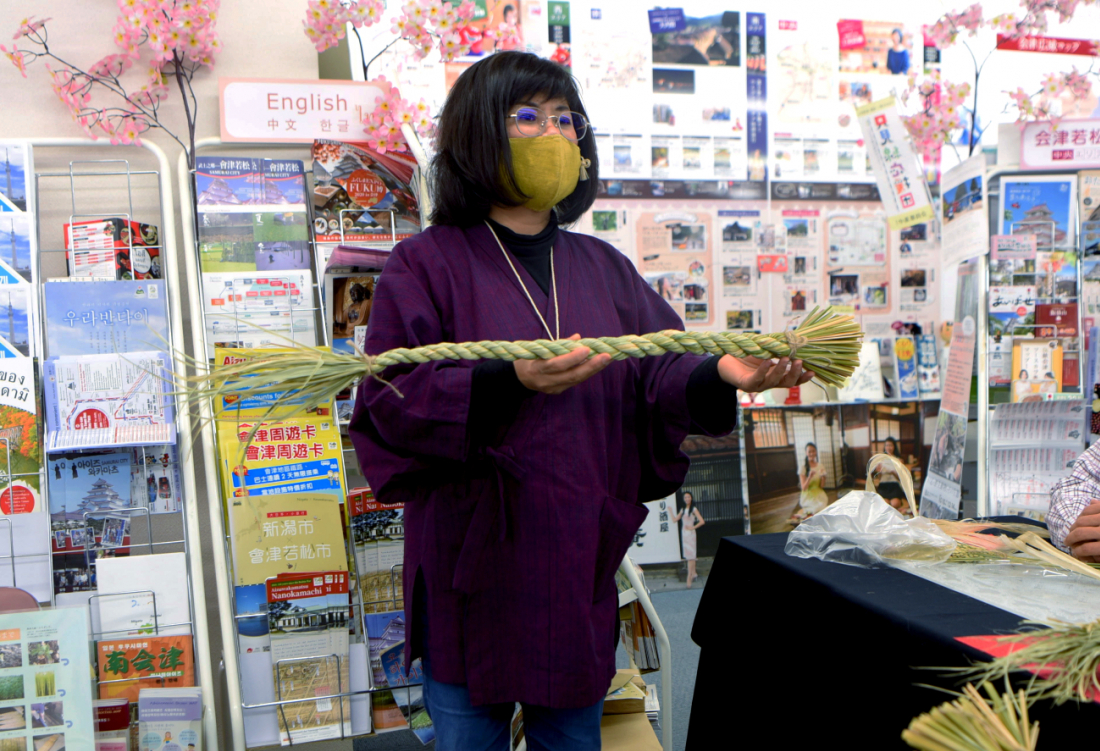 But don't forget, I said we divided the rice straw into three parts! To complete the rope, we took our final bunch of makomo and tied it on, winding the individual strands of straw one way as we guided the whole thing in between the first two twists. Throughout the whole thing, Inomata reminded us we were finding our own paths as we manipulated the straw into just the right shape, and just the right place.

Finally, with all three bunches tied off, we had a shimenawa! But we weren't done yet. 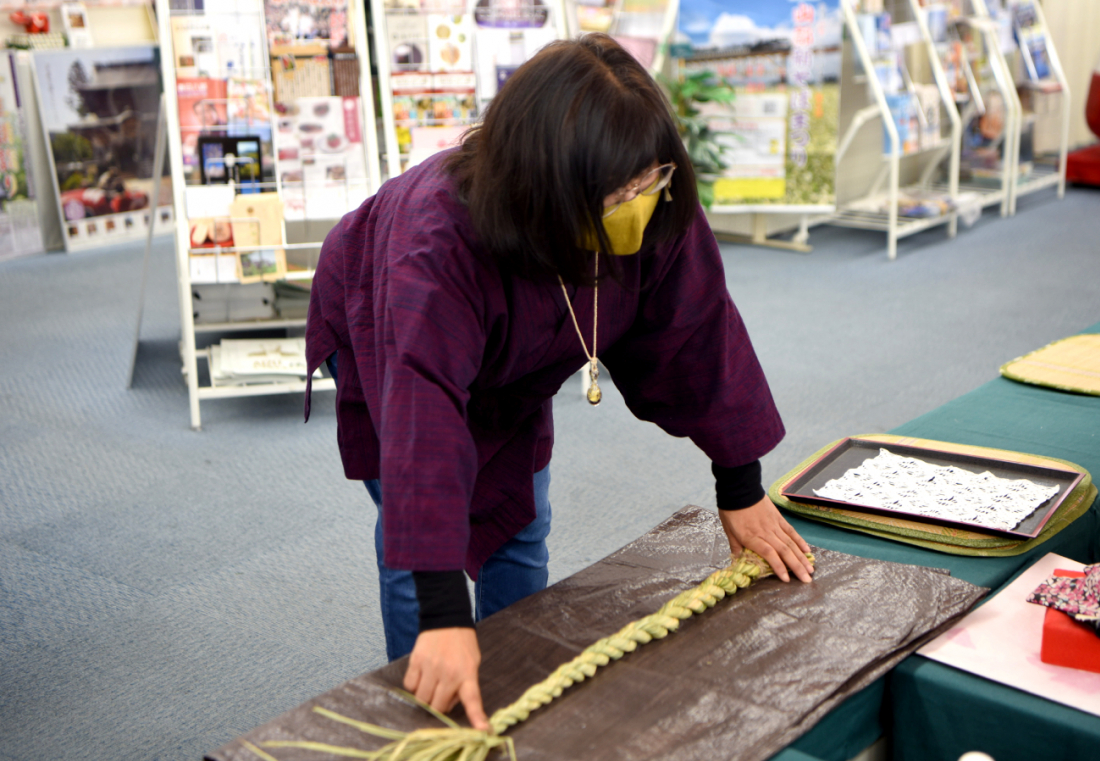 First, we laid out the ropes and pushed with the heels of our hands along the entire length, on each side, to shift the pieces around and even things out. After that, each of the ropes stood straight and beautiful, ready for use!

Then came the final step, where we took a little bunch of the dried wild rice, and a long strip of hemp, and tied the whole thing in a lovely loop. The final step was to use the palms of our hands to twist the strands of hemp into a thin twine, rubbing our hands together like we were chilly in the autumn Tohoku air, so as to bring the hemp fibers together. 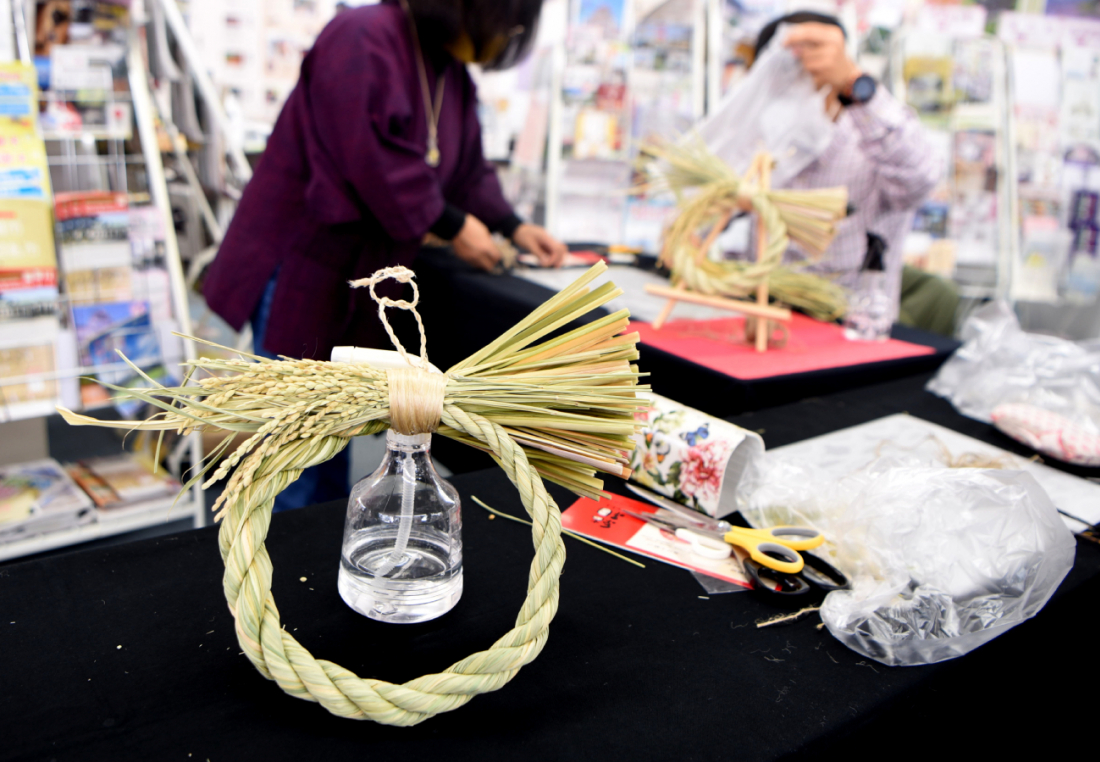 Here's the final product! My very own shimenawa, made of makomo and seima, ready to keep evil away from me in 2021! It's been a rough year for everyone, so I'm really counting on this Aizu memento to bring us a little more luck sometime soon. For now, it's a lovely everyday reminder of my fun trip to Fukushima.

Interested in making your own shimenawa with Kumiko Inomata? Find her, and make a reservation, at Yuimaru.