There might be a few questions for some like, "What's Gegege no Kitaro?", or "What's yokai?" Well! Hopefully I can explain them both all at once! Gegege no Kitaro is a manga series created in 1960 by a lovely artist, Shigeru Mizuki. Each story has a different storyline, but it's about a boy (who is a yokai) name Kitaro that just wants humans and yokai to live together peacefully. Kitaro only has one eye, because when he was born both his mother and father were dead. His father felt bad for poor baby Kitaro, so came back as Kitaro's eye - becoming Medama Oyaji! As we said before, each storyline is different, but all involve Japanese spirits, creatures, mythological, folktale creatures, i.e. yokai! Like one of Kitaro's good friends Ittan Momen, who is a white cloth looking yokai that flies around. He is much nicer in Gegege no Kitaro, but the myth around the original Ittan Momen is that it would wrap itself around the faces of humans in an attempt to smother them. It became so popular it eventually was made into an anime series as well as live-action movies and video games! 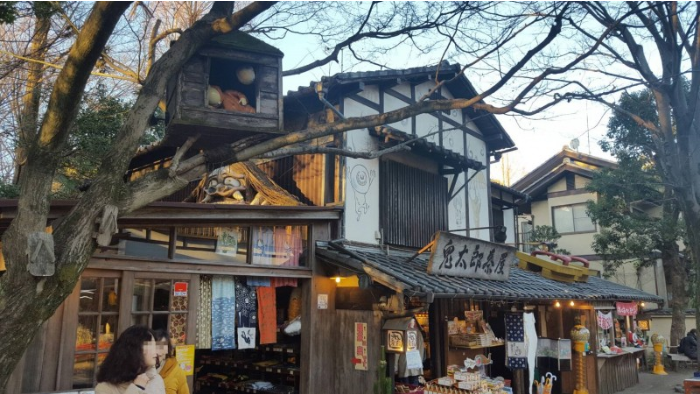 Shigeru Mizuki is originally from Tottori Prefecture but lived in Chofu, Tokyo for sometime before his death. Which is why at Jindaiji, there is a Gegege no Kitaro themed cafe!!! We love Gegege no Kitaro and ANYTHING yokai, so we wanted to go take a look. Since the first time, we've gone back multiple times👻💗

You can see lots of goods to buy from outside. We wanted to buy EV.ERY.THING!!!!!! It's like we jumped into Shigeru Mizuki's world!!!!!! We never wanted to leave💗 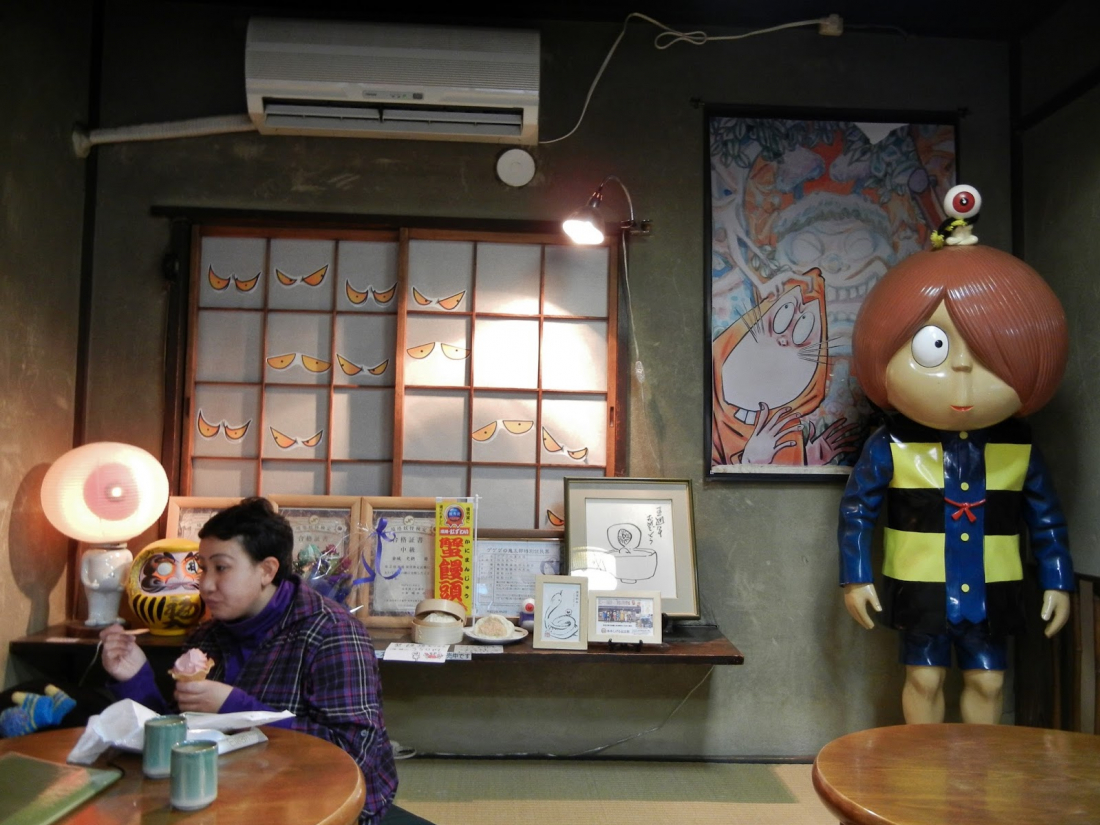 Back when I first went in 2014 this is what the cafe looked like. Just a small area where you sit on the floor and eat some fun themed dishes. Now it is much bigger and more spread out for more people to enjoy! Which brings me to believe the recent rise in popularity! Not only is there more space for people, compared to how it was, the Kitaro concept doesn't stop at wall decorations and figurines. Now the tables, lanterns, seat cushions, etc. incorporate the characters in Gegege no Kitaro. My favorite are the booths that they made to look like Nurikabe! 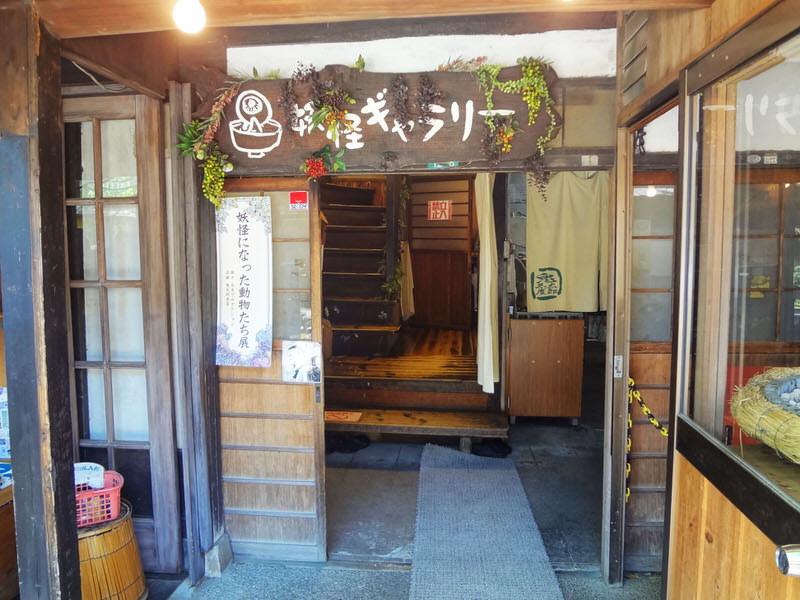 There's a Yokai Gallery connected to the teahouse! Take the stairs upstairs and you'll see a room filled with Shigeru Mizuki's yokai figures, books, posters, etc on display. Shigeru Mizuki also includes foreign yokai/folklore creatures in Gegege no Kitaro. Like China's beast Bai Zei (Kutabe in Japanese). A good number of the displays also incorporate the figures with Shigeru Mizuki's drawings of that traditional yokai in the back. It was like you were looking at more than just pop culture. You were also getting a sense of Japanese history and culture.


Along with models and pictures of yokai, there are other really neat and fun displays in the gallery! One is a map with a bunch of yokai figurines and their names on top of the area in Japan they came from. That way next time you go to say Kyoto, you can keep an eye out for Wanyudo (輪入道), the said "guardian of Hell" that is a burning oxcart wheel with the face of an angry man in the center of the wheel. 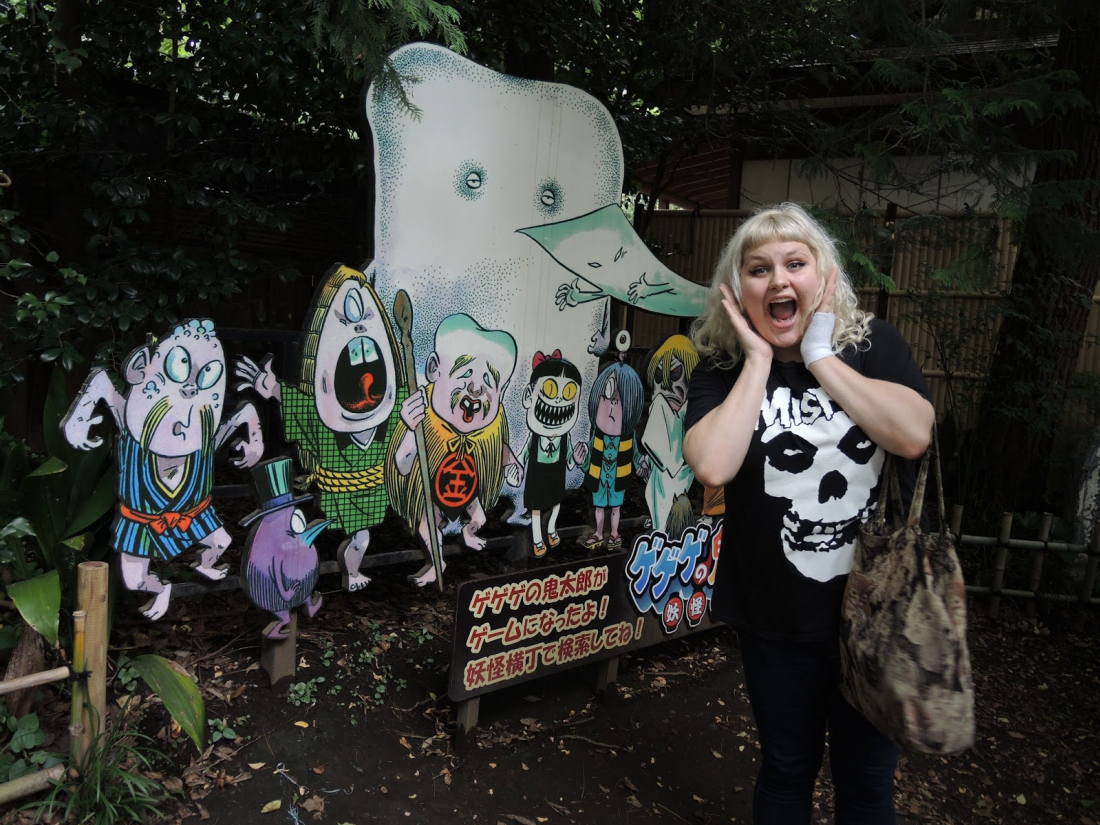 Lately there are shows coming out about Japanese yokai, such as Yokai Watch. It's a cute show, don't get us wrong. But one of the MAIN THINGS that sets Shigeru Mizuki's Gegege no Kitaro apart from Yokai Watch is that all of the yokai are taken from actual Japanese myths. Yokai Watch, while does include some Japanese yokai such as Nurikabe, the yokai are created for that show. They don't have the same long history or stories as the yokai in Gegege no Kitaro. Once you know a bit about Japanese yokai, you of course learn more about Japan and their values, but it also allows you to connect with some of their social meanings. For example, if you love cucumber, it's likely a Japanese person will call you a Kappa since apparently Kappa love cucumber. Or someone who is stuck up, they're like a tengu because of their large nose that points up to the sky. It's really interesting and fun once you learn those things!!

The Kitaro Teahouse is perfect for just about everyone. Kids, anime or manga lovers, history buffs, people wanting to learn more about old Japanese culture, or even those who just want to check out someplace new! We guarantee you'll have a terrifyingly great time!
👻Kitaro Teahouse (鬼太郎茶屋、Kitaro Chaya)
Google Maps
🚃Access: Chofu Sation - from the Center Exit (中央口)
take the Keio Bus headed for "Jindaiji" (深大寺行); roughly 15mins
Kichijoji Station or Mitaka Station - from the South Exit (南口)
take the Odakyu Bus headed for "Jindaiji" (深大寺行); roughly 20mins
*Both will take you directly to the Kitaro Teahouse!
⏰10am～5pm (closed Mondays)