Ghibli Classic Spirited Away Is Coming to the Stage, and the Cast Is Here!

Ghibli Classic Spirited Away Is Coming to the Stage, and the Cast Is Here!

For Ghibli fans and theater lovers, this live stage adaption of Spirited Away might be a dream come true.

Have you ever wished you could meet Chihiro (or is it Sen?), Haku, Yubaba, Lin, and all the rest of the bathhouse staff the rest in person? Are you such a Studio Ghibli fan that you might even risk an encounter with a hungry No Face? Well, this might be your chance. Spirited Away blew away box office records when it hit theaters almost 20 years ago, and now it's back in a whole new way, as a live theater performance. The Hayao Miyazaki classic will be premiering on stage directed by John Caird, first at Tokyo's Imperial Theatre in February/March 2022, before moving to productions in Osaka, Fukuoka, Sapporo, and Nagoya later in the year.

The next most important information, of course, is just who will be playing these beloved characters? Who could really bring the feelings of ten-year-old Chihiro―lost and afraid, but bravely determined―to life? The answer seems to be two different actresses, actually! Spirited Away is being double-cast (or "w-cast" as they might say in Japan), which is fairly common practice for live theater in Japan. Neither actress is an understudy for the other, and they share the role equally, simply splitting dates and times, as do every pair of actors playing each major role.

For Chihiro, the two actresses are Kanna Hashimoto, an idol-turned-actress, and Mone Kamishiraishi, who gained fame as the voice of the lead in the Makoto Shinkai anime film Your Name, and has actually worked with director John Caird before during her career in musical theater. At 22 and 23-years-old respectively, we can only hope the talented young actors will be able to capture Chihiro's young, stubborn spirit.

The two actors playing Haku, seen here meeting for the first time, are Kotaro Daigo and Hiroki Miura. Like Mone Kamishiraishi, Daigo also found popularity after playing a leading role in a Makoto Shinkai anime, although he starred in the more recent film Weathering with You. Miura, despite being just 22 years of age, is already a seasoned musical theater performer, recently appearing in shows like Grease, Little Shop of Horrors, and Les Miserables.

The rest of the main cast includes a number of performers with illustrious backgrounds. Lin will be played by two particularly popular actresses hailing from the Takarazuka Revue, a famous all-female theater troupe, namely Fu Hinami and Miyu Sakihi. No Face, on the other hand, is being portrayed by choreographer Koharu Sugawara and Cirque du Soleil performer Tomohiko Tsujimoto, who both have extensive backgrounds in dance, hopefully lending No Face all the creepy forms of movement necessary. Satoshi Hashimoto and Tomorowo Taguchi will be splitting the role of Kamaji, the grumpy but endearing many-legged boiler room worker who begrudgingly welcomes Chihiro into the bathhouse. And finally, Yubaba and Zeniba will be played by two actresses sure to excite anime fans everywhere. Romi Park has previously voiced a whole host of characters in internationally famous animes, ranging from her role as Edward Elric himself in Fullmetal Alchemist, to characters in Bleach, Naruto, Attack on Titan, Nana, and even Pokemon (she actually voices Zoroark). Mari Natsuki, on the other hand, has performed far fewer voices, but she did have one extremely important role: the original voice of Yubaba and Zeniba in Spirited Away. And here she is, back to reprise the role, in person this time. 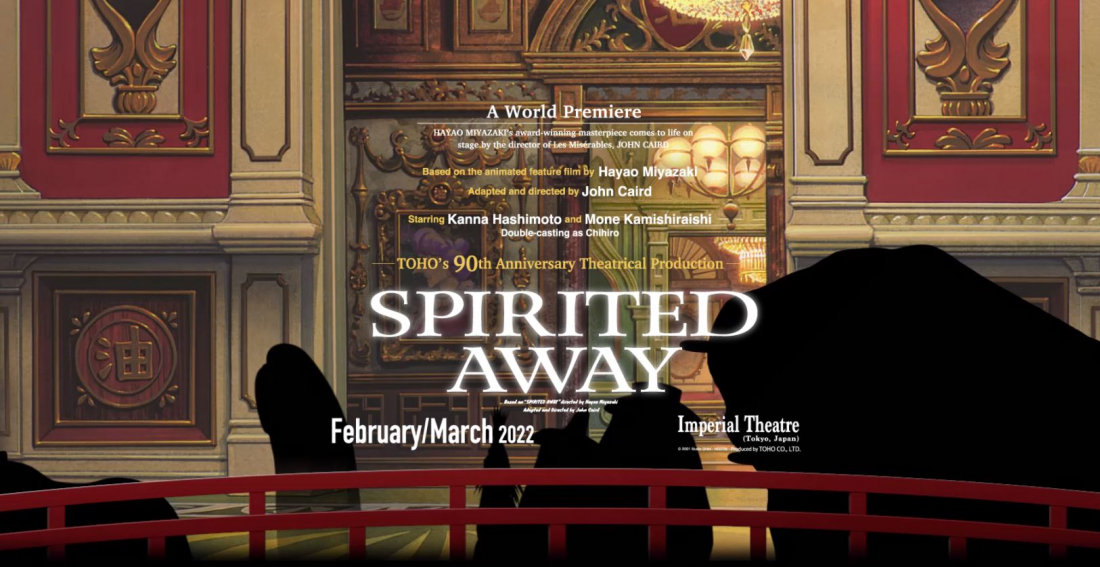 With a little over half a year to go until Spirited Away performances begin, 12 actors playing 6 main characters have been announced, but we're excited to see what else comes out in the remaining months. Will Bo, Yubaba's giant baby and sometimes chubby mouse, maintain his important role in the live stage performance―how might they portray this unusual role? Will the bathhouse's greedy gold-loving frog make it into the play? How about the radish spirit who joins Chihiro in the elevator? (Probably not.) Hopefully the Spirited Away stage play Twitter account will continue to post more about what's coming soon, because as big Ghibli fans, we're waiting in anticipation!