Uniqlo Asakusa Is a New Addition to the Asakusa Shopping Scene, With Old-Fashioned Inspiration

Uniqlo Asakusa Is a New Addition to the Asakusa Shopping Scene, With Old-Fashioned Inspiration

Known for simple, stylish basics, Uniqlo's new Asakusa location is arriving on the scene with a little extra Asakusa style. 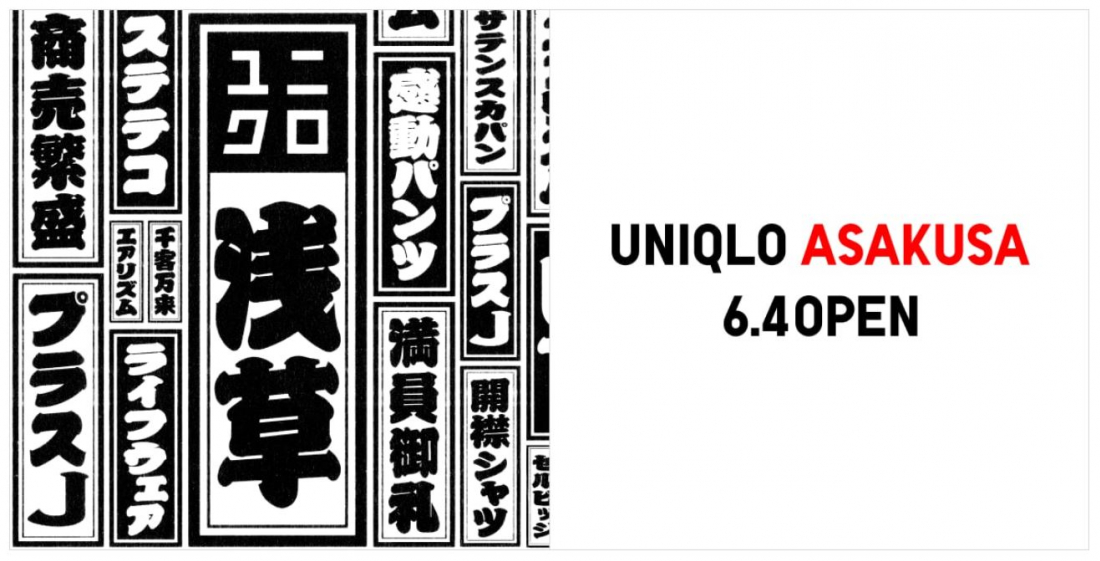 Uniqlo's new location in Asakusa is big, and despite the incessant rain on its first day open, the shop's making a splash on Asakusa Broadway. Moving across the street from its previous compact location inside a mall, Uniqlo has taken over the building that formerly housed the Marugoto Nippon shopping center, replacing multiple previous tenants with just a whole lot of Uniqlo clothing. Despite the lack of international tourists in Asakusa these days, the brand has expanded its Asakusa offerings into a new retail space that spans multiple floors, clearly a spectacle made to woo more than just the average shopper. On the new shop's page, Uniqlo describes Asakusa as "one of Japan's foremost popular sightseeing spots, visited by numerous tourists, domestic and international." With a company as big as Uniqlo is now, it's no surprise they're looking to the future, when the hordes of sightseers are sure to return. 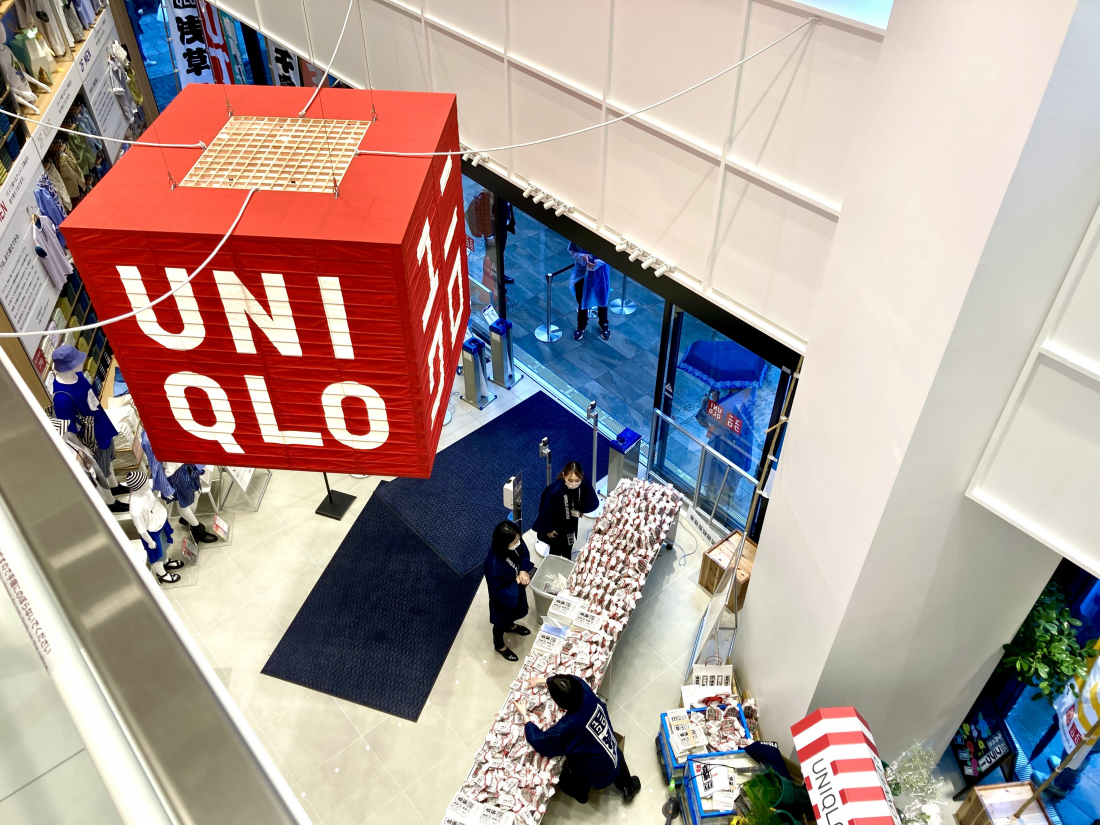 In the meantime, they're celebrating the shop's opening day with plenty of enthusiasm! In the days running up to the event, Uniqlo distributed commemorative t-shirts to local restaurants, and even special Uniqlo happi jackets to rickshaw drivers operating in Asakusa, just in case anyone in the area needed a reminder of the major changes happening inside the big building nearby. More exciting for eager customers, however, are the various goods being handed out to shoppers. Starting with the shop's opening this morning (June 4th), Uniqlo has been giving out all kinds of commemorative knickknacks to celebrate, and even some snacks. 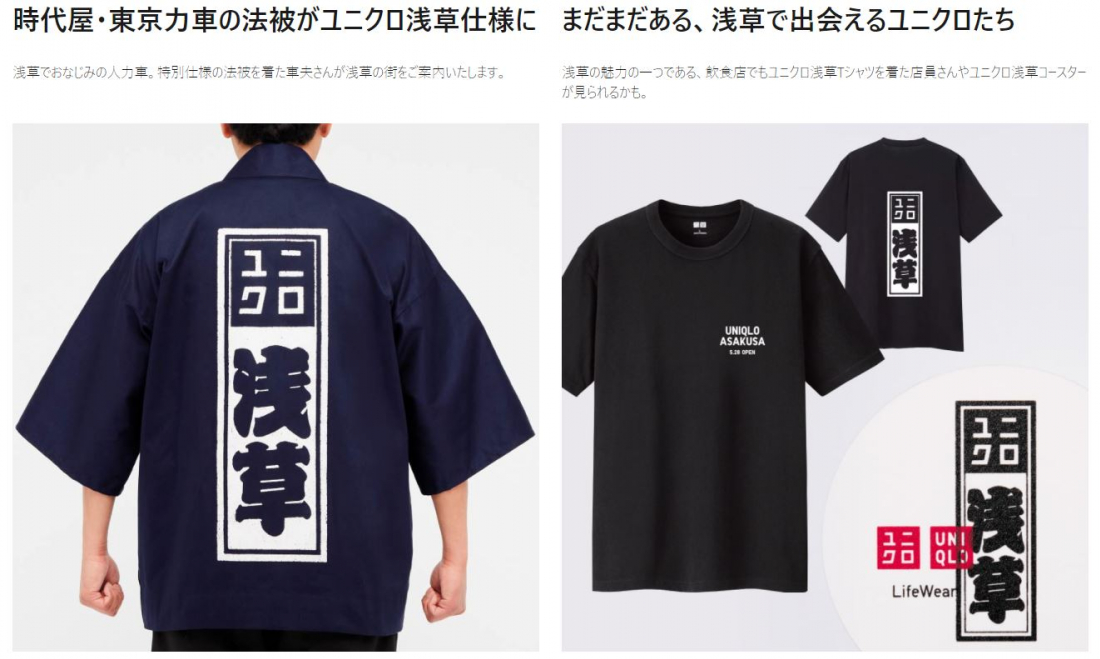 The shop is embracing its unique location, from the enormous paper lantern featuring the Uniqlo logo at the entrance, to the new special Uniqlo Asakusa logo, which is plastered just about everywhere. The new logo is designed to resemble a "senjafuda" (千社札), which is a little slip of paper that Japanese pilgrims traditionally paste onto the gate when they arrive at a shrine or temple. Usually, senjafuda bear the name of the person visiting, but in this case, the senjafuda-style logo simply reads "ユニクロ浅草," or "Uniqlo Asakusa."

Asakusa basically radiates out from the grounds of the historic Sensoji Temple, so if they wanted to do a unique logo for their Asakusa location, the traditional Japanese style is an obvious choice! 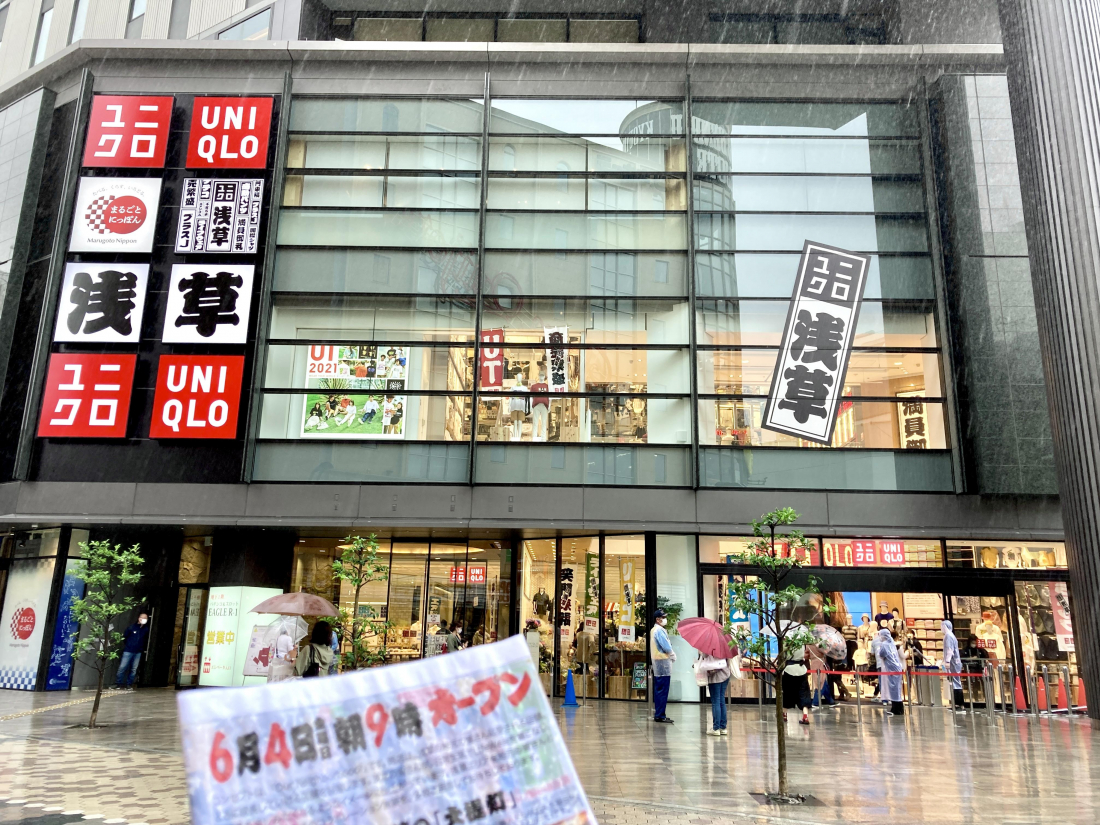 Uniqlo had announced that the new store would open an hour early on its first day of business, and a small number of enthusiastic customers began to line up accordingly, arriving at the store early in the morning. Unfortunately, the shop didn't end up opening until closer to 11 in the morning, at which point a sizable line had formed, waiting in the rain. 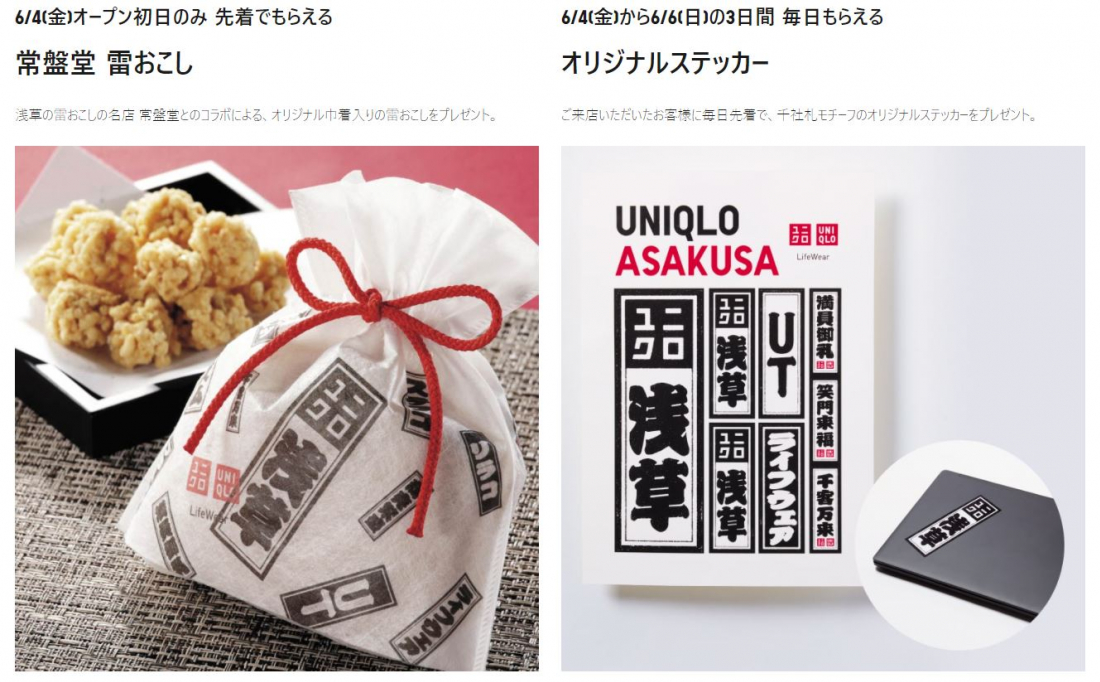 Undoubtedly, many of the customers standing around patiently in the drizzle were there to get their hands on some of those special give-away items Uniqlo announced on the website ahead of time. The first 2,000 visitors who arrived at the store were treated to little bags of kaminari-okoshi (雷おこし), basically traditional Japanese rice krispie treats, in special Uniqlo packaging. These were gone within the first few hours of business, but the other freebie is likely to last a little longer: sheets of special, limited-edition Uniqlo Asakusa stickers, including the logo and similar designs featuring the names of popular product lines. For all the die-hard Uniqlo fans who couldn't quite make it to the opening hours of the shop, but need to paste "Uniqlo Asakusa" on all their possessions, don't worryーwith 30,000 sheets of stickers printed and ready, the shop will probably be giving them away for a few days yet!

Inside, the shop is spacious, but not necessarily as extensively stocked as you might expect. While the shop carries a variety of men's, women's, and children's items, there are fewer tightly-packed shelves and more large, decorative displays in this particular location. Currently, they're showing off lots of light, summery staples.

If you're in Tokyo to do some serious shopping and want to see what Uniqlo has to offer, you'd probably be better off stopping by Uniqlo's enormous Okachimachi shop, which next to Okachimachi Station and about 30 minutes away from Asakusa on foot or 20 by bus. But for a fun Uniqlo-full experience, this is the place! 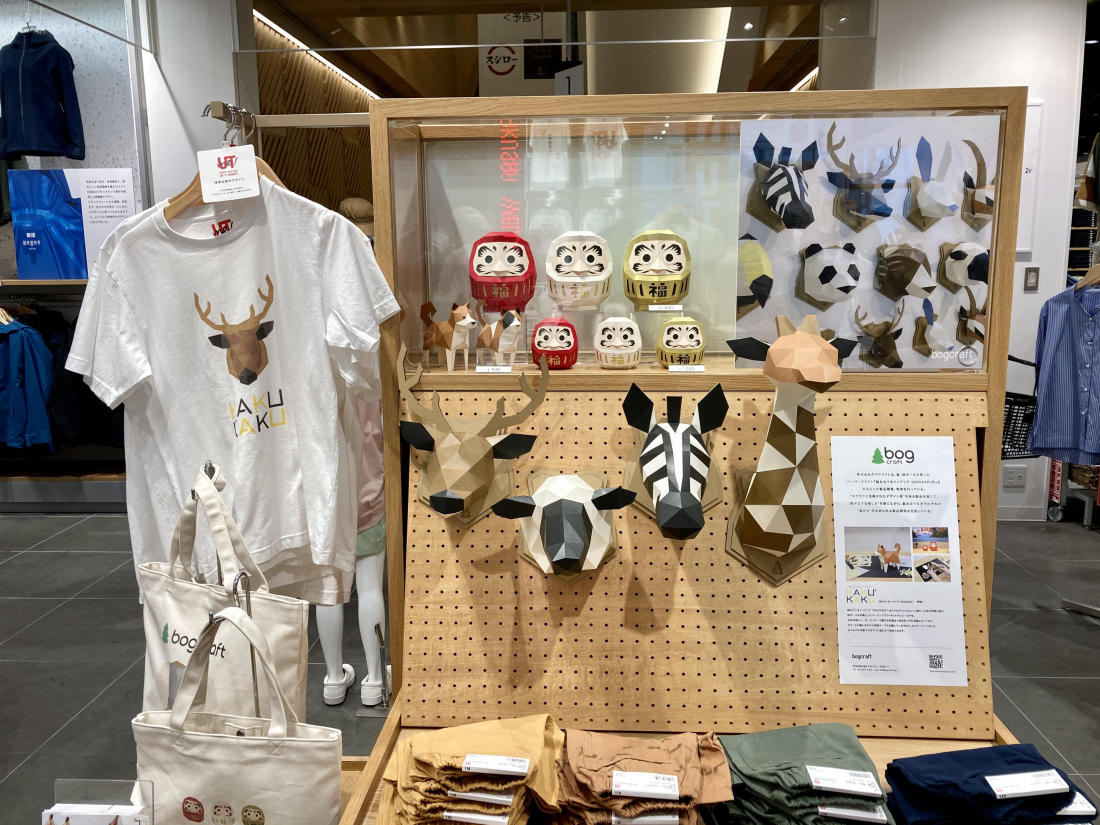 The second floor is called the men's section, but many of the shelves next to the escalator are dedicated to various collaborations Uniqlo has been doing with other brands. 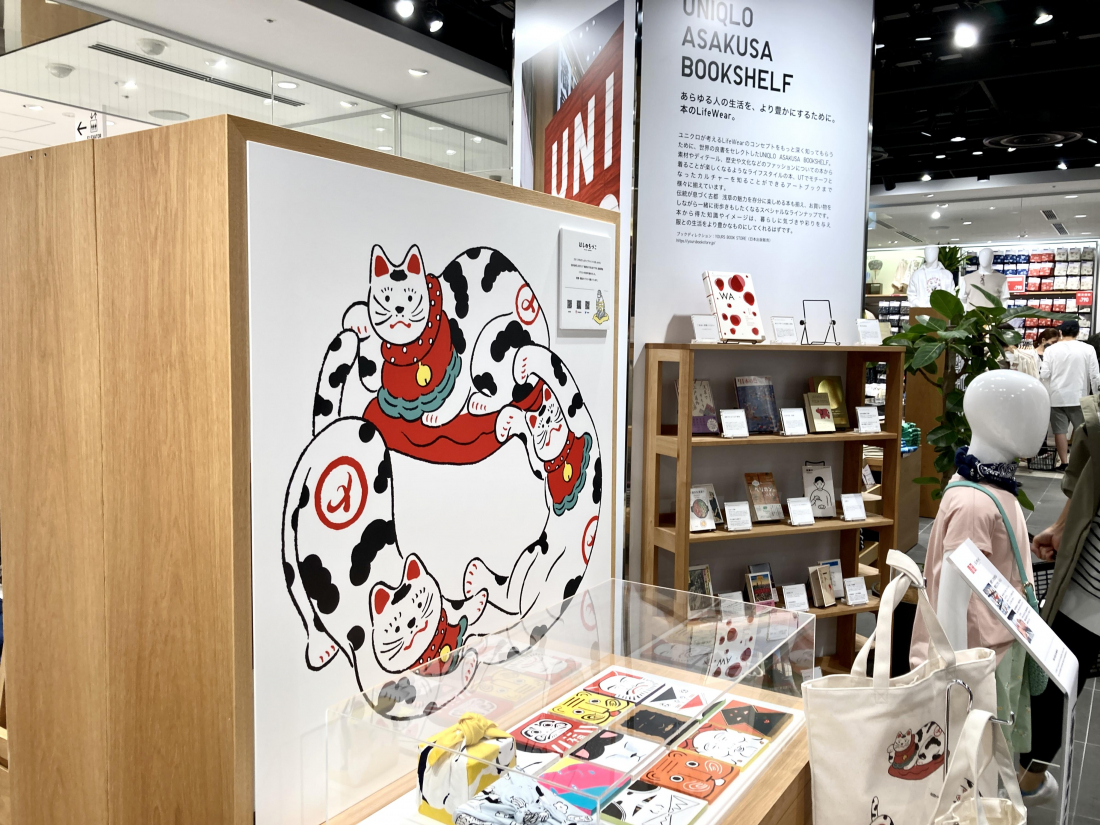 Also on the second floor, the Uniqlo Asakusa Bookshelf, for everyone who wants to get some reading done in the Uniqlo. 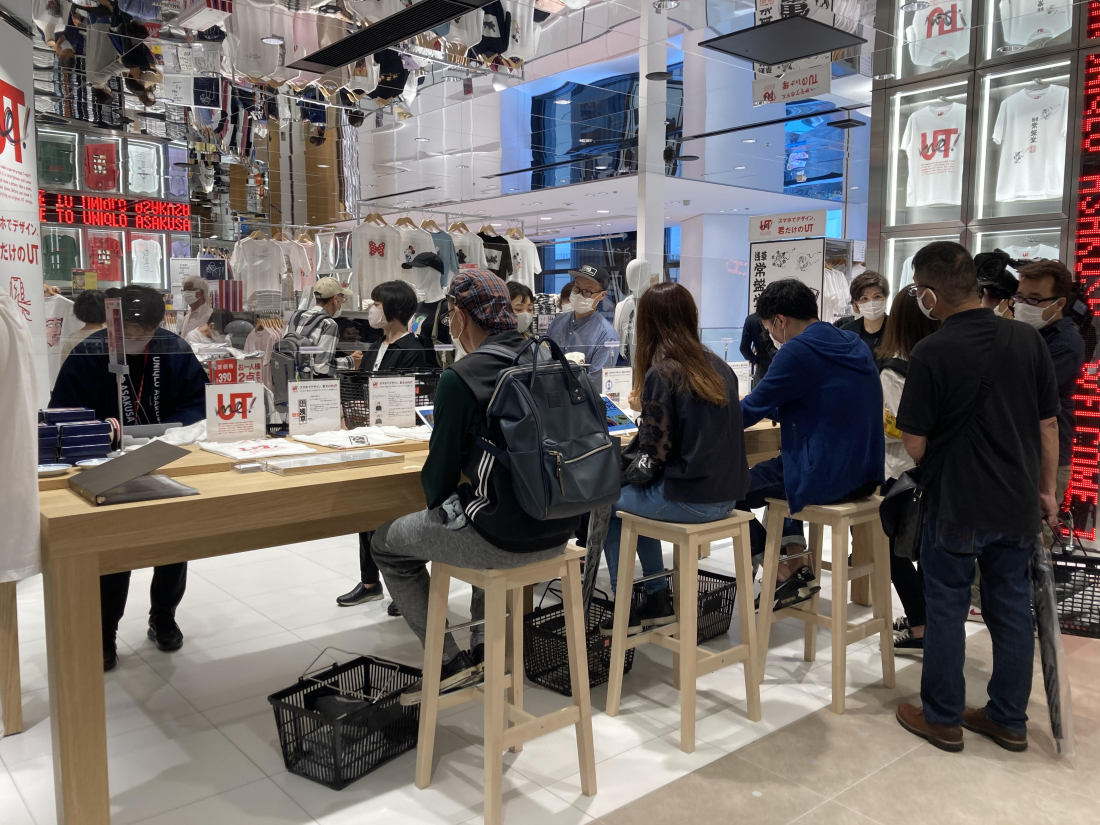 About a third of the upper floor is taken up by Uniqlo's UT line, which includes t-shirts made in collaboration with various brands and artists, plus blank t-shirts that you can design yourself. At the new shop, there's even a counter dedicated to the customizable t-shirts. One of the designs available for those shirts, and also available on small ceramic dishes, is an illustration of the lantern from Sensoji Temple's Kaminarimon Gate, a symbol of Asakusa, found about ten minutes from the new shop. 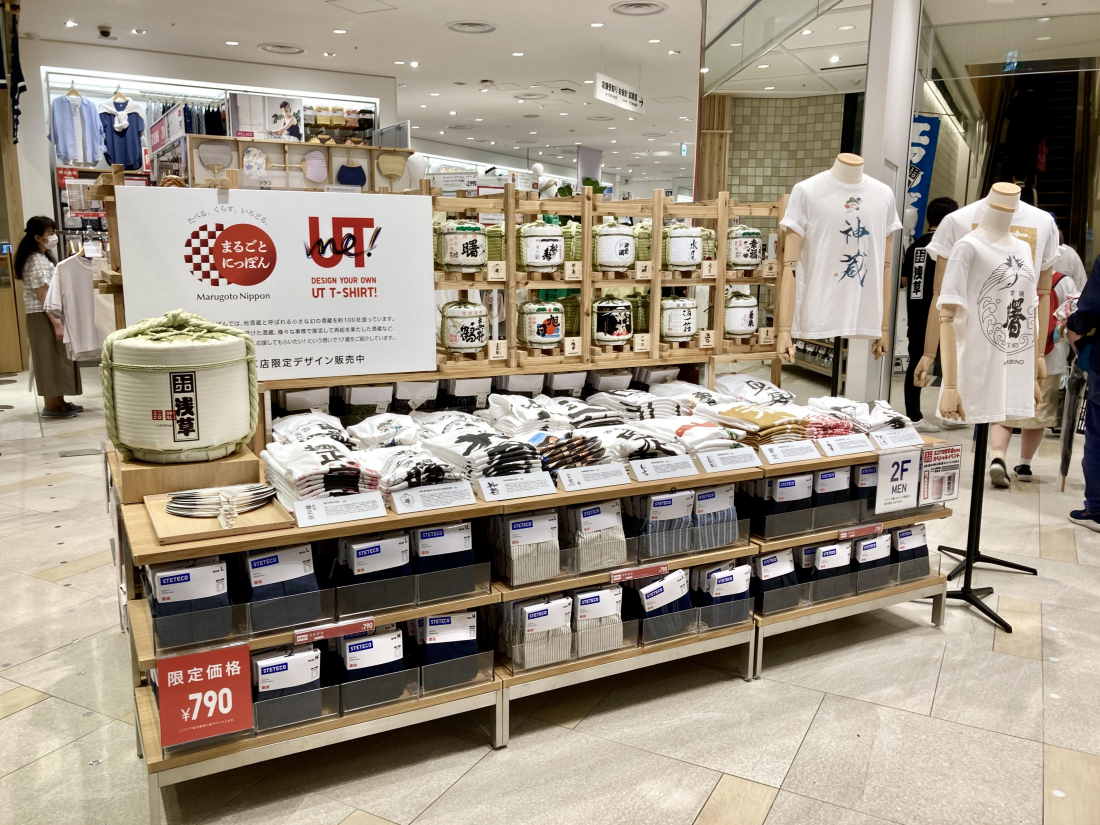 Back down on the first floor, one display shows off their new UT collaboration with Marugoto Nippon, which used to take up the entire retail space and now has a small store that can be accessed directly from a corner of the Uniqlo. The line of UT shirts features logos from 17 Japanese sake brands with breweries around the country, which for the time being, are only available at Uniqlo Asakusa. While it's possible that Uniqlo will begin selling the designs at other stores in the future, Uniqlo trivia enthusiasts may be interested to know that the sake jugs attached to the t-shirt display in Uniqlo Asakusa are actually filled with real sake! You're not likely to see that in any old Uniqlo. 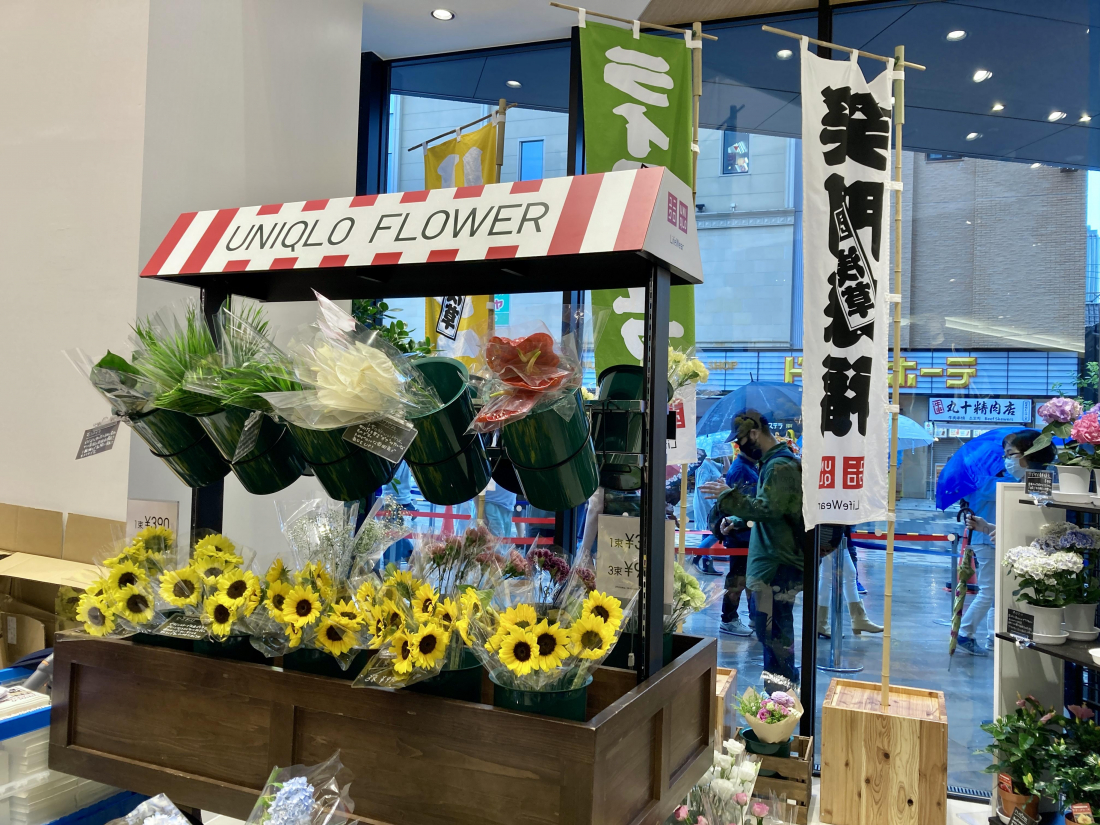 Near the entrance, Uniqlo has set up another Uniqlo Flower location, which the Japankuru team first saw at the Uniqlo that opened in Shibuya last year. 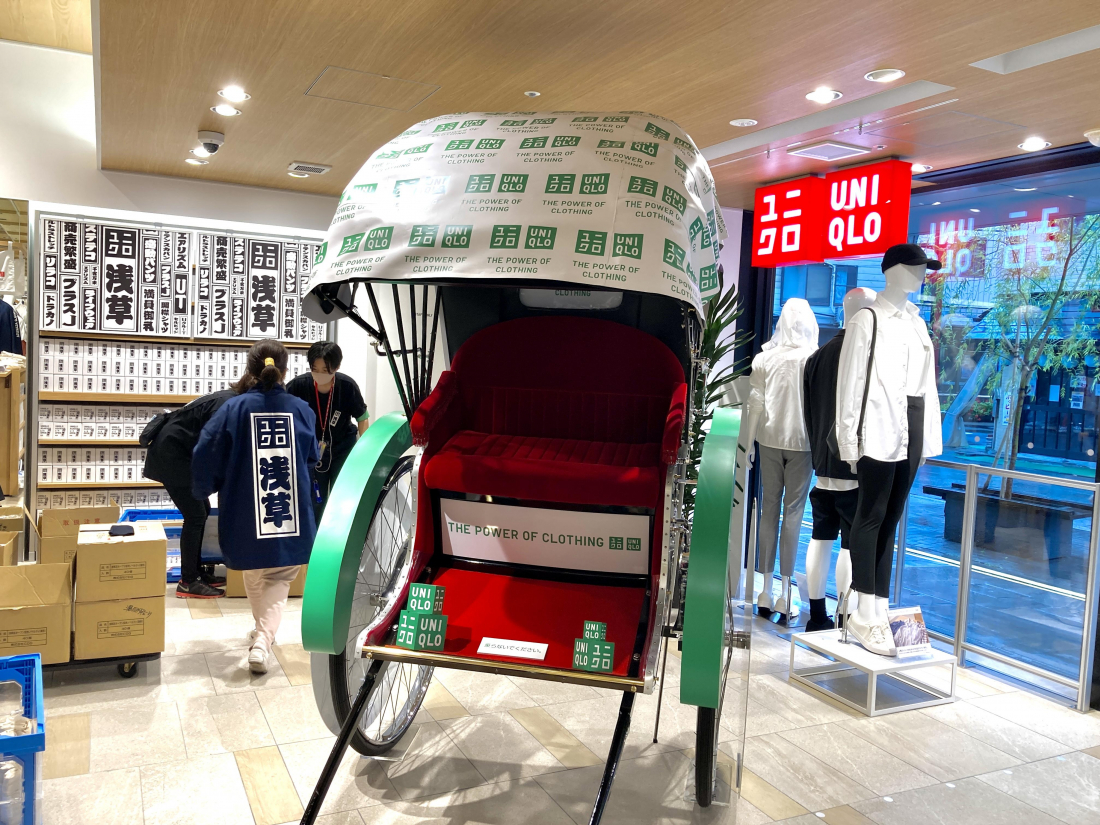 And near the exit, there's... a Uniqlo rickshaw.

I hate to break it to you, Uniqlo, but when it comes to rickshaws, it's really less about "the power of clothing," and more about the power of human muscle.

As the final opening day treat for customers who spend 5,000 yen or more, Uniqlo is giving out commemorative teacups for the first few days of business, or until they run out. In fact, the morning started with them giving out both teacups and Uniqlo tote bags, but the bags apparently ran out within an hour or so of opening.

The paper shopping bags being offered at Uniqlo Asakusa also come decorated with the special Asakusa logo, and while there's no word on how long Uniqlo Asakusa will be using these bags, they will apparently be used at other Uniqlo locations in the area for a limited time, as well. 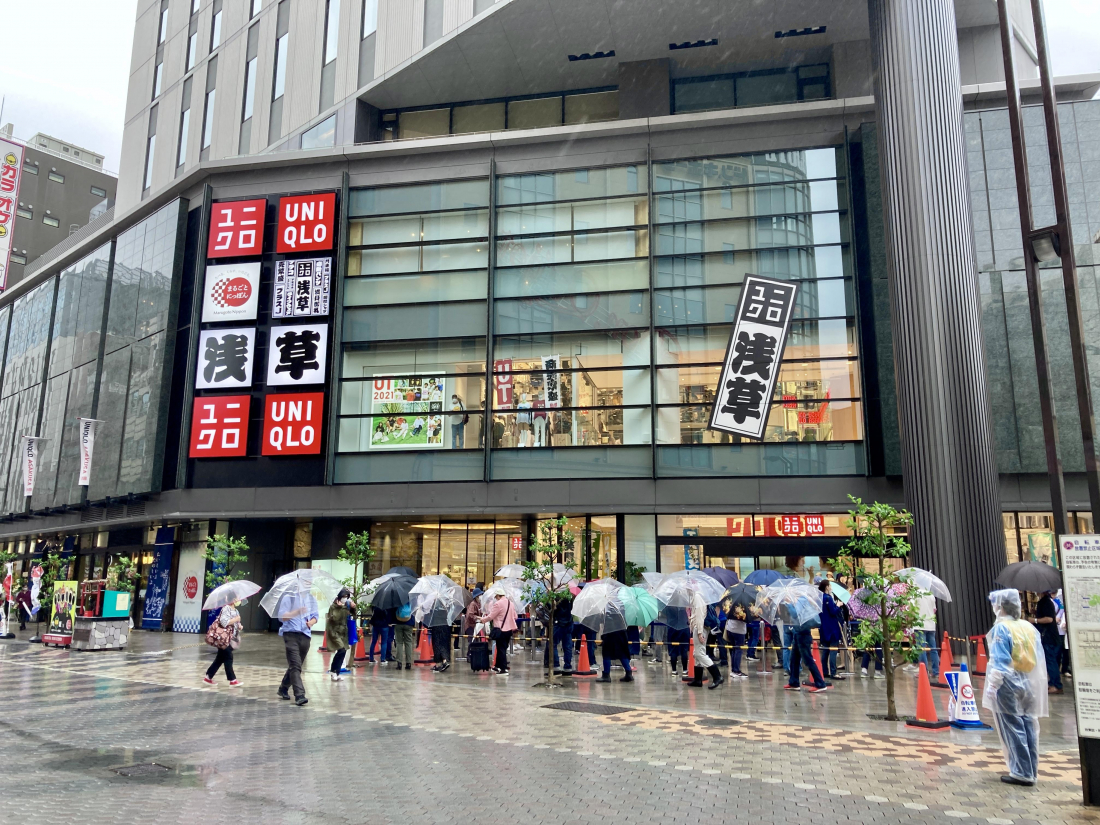 Bye, Uniqlo, we'll see you again on a day with a little less rain!