The Spy Family anime has been a major hit this summer, and with that popularity comes some fantastic merchandise.

Shopping With the Spy x Family

The anime debut of the spy/ESP/assassin comedy Spy x Family brought the series to the attention of just about every anime fan in Japan, and the surprisingly heart-warming story has kept passion for the show just about as heated as the temperatures this summer. Like so many trends, the popularity of many anime shows comes in waves in Japan, and Spy x Family seems to be picking up where Demon Slayer: Kimetsu no Yaiba or Jujutsu Kaisen left off. So with the first season over and a second one anticipated this fall, interest in Spy x Family is at an all-time high (the show has topped viewing charts for at least 13 weeks in a row), and manufacturers are looking to capitalize on the situation by cooking up some unusual and intriguing bits of merchandise for viewers (and readers of the manga, too). Of course, no true fan is going to complain about an excess of fun anime goods, and we're not mad about it either. Spy x Family has only been out for a matter of months, but these are some of the best bits of merchandise we've seen so far! 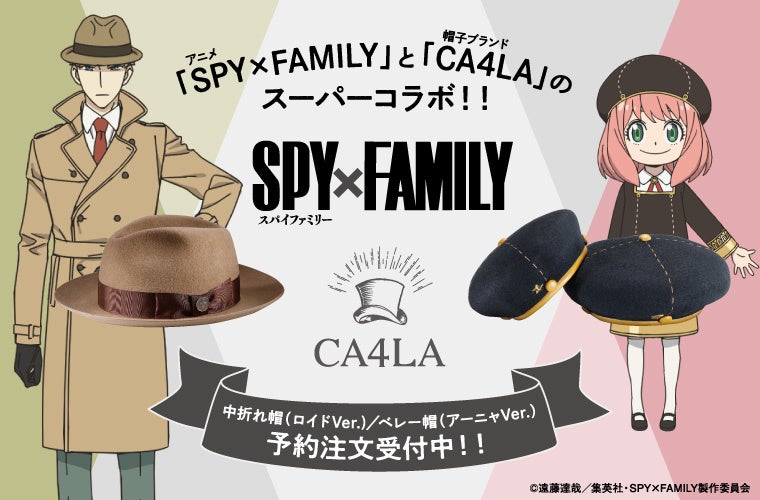 Why is Spy x Family popular?  For some, it's the jokes slipped into a would-be spy-thriller, and for quite a lot of fans, it's golden hearts and shocking secrets that each of the main characters keep hidden. But for others, it's the visuals. Set in a vaguely WWII-era European-styled country, the show has a style that clearly differs from the Japanese settings or total fantasy often found in anime these days, and more than a few fans have been left pining after the chic outfits worn by the show's cast. Which is why there's no doubt that even those who might usually shy away from cosplay are looking for a chance to experiment a little with Spy x Family styles this season. Hence the "Spy x Family and CA4LA Super Collabo!!" Popular hat fashion brand CA4LA has partnered with the Spy x Family team to recreate two hats from the show: Loid's subtle brown fedora, and Anya's classy school uniform beret, both of which come with plenty of little details for fans to enjoy. (Not only is the button on Loid's hat imprinted with his WISE spy logo, but his name is even embroidered inside the brim, too!) This is the kind of cosplay that only fellow fans will recognize and appreciate, so you can keep your anime love on the down-low while simultaneously sharing it with the world! 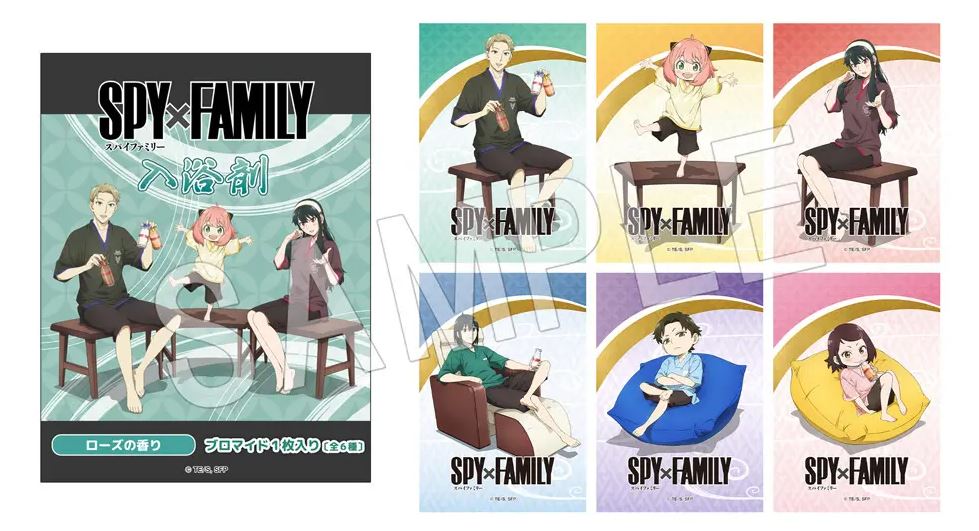 Ever wondered what bathtime at the Forger household might smell like? Well, without getting too creepy, Japanese bathhouse chain Raku Spa has an answer for us, and it goes right along with the quaint European-esque setting. Roses! Raku Spa has a history of anime tie-ups, and in the past they've gotten pretty steamy with everyone from the Attack on Titan recon corps, to the casts of Demon Slayer, Jujutsu Kaisen, Tokyo Revengers, and more. This time, alongside a slew of other items decorated with illustrations of the Spy x Family cast all wearing casual bathhouse relaxation wear, the promotion includes a series of Spy x Family bath salts, formulated to make your bath smell of ravishing roses. Fill the tub with warm water, start your favorite episode of the show on your streaming device of choice, and add this packet of floral bath powder for the ultimate Spy x Family bathtime.

③ A Watch to Watch Out for

When just a hat is not enough to satisfy your love of Spy x Family and its era-less style, then it might be time to turn to pocket watches. These functional pocket watches come in three designs, inspired by each member of the Forger family, replete with references to each of the characters’ stories. The Loid design is perfectly suited to blending in as any old pocketwatch - except of course for the small WISE logos reminding you of his many secrets. Anya’s watch is full of the symbols of her school life - the school crest, campus buildings, and the stars and bolts symbolizing the points and demerits she earns while there. (Plus her funky hair accessories made it onto the watch, too.) Finally, as the Princess of Thorns, Yor’s watch design has a lovely rose (obscuring a dripping dagger, of course). Perhaps that's what really inspired that bath salt, in the end!

The choice of a Spy x Family pocket watch is somehow both more subtle and also more ostentatious than a hat, but for fans of the show, it might be the perfect new accessory.

With Spy x Family's popularity exploding and only one season under its belt, fans have a lot to look forward to in the coming months. New episodes and new characters, of course, but also quite a bit of new merchandise! With such a fun collection of items already available on store shelves and online marketplaces, this new series is likely to be a goldmine for all kinds of members of the anime community. We can only wait and look forward to everything that this unique mix of iconic characters, distinct style, and comedic interludes will bring next!