Over the past years, JAPANKURU has been all around Japan's mountain area Tohoku,
but this time we went to some places that we felt really shows off
the regions stunning mountains, lakes, hot springs, and everything else the area is famous and loved for. 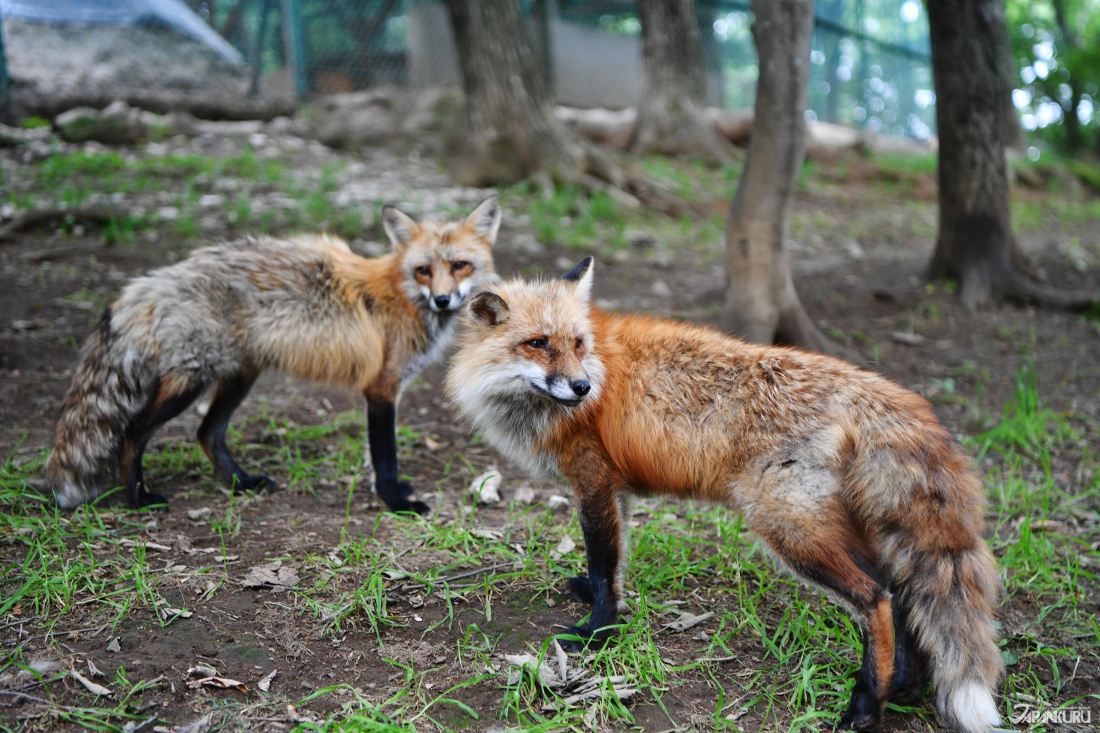 
Located in the Zao Fox Villagee in Mt. Zao, Miyagi, there are more than 100 foxes of various breeds.
Here, you can not only observe the foxes at close range but also feed them! We want to recommend you wear good shoes though! Hiking shoes are best if you have them. 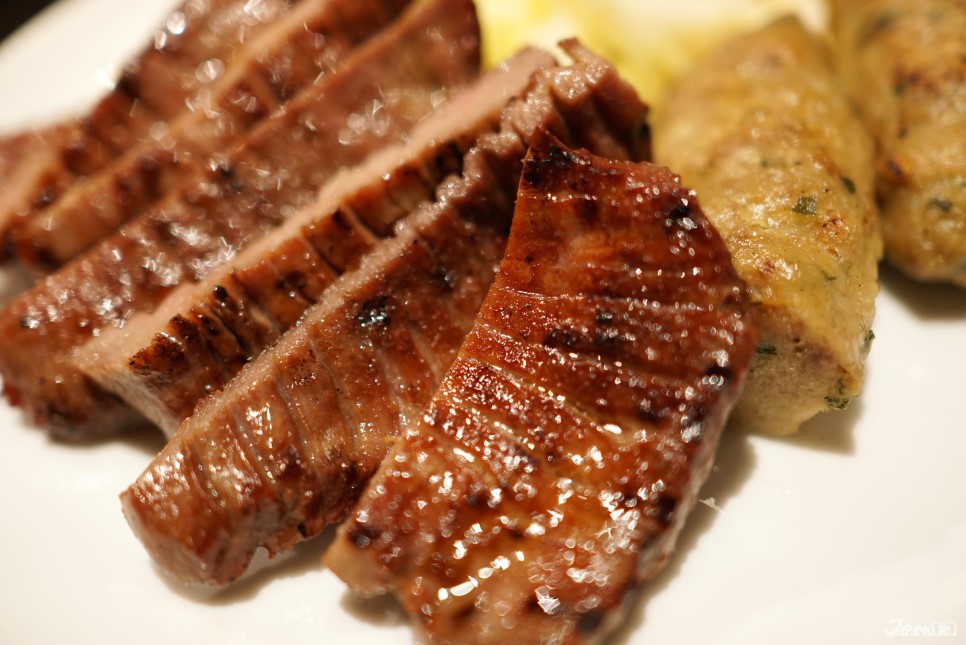 
When it comes to the famous products in the Sendai area, the first thing that comes to mind is definitely beef tongue. Japanese people love to eat beef tongue, which is a bit strange for many foreigners to grasp.
The beef tongue grilled over a charcoal fire and whether you dip it in soy sauce, miso, or salt, it tastes way better than you would think! If you have the chance to try, please do! 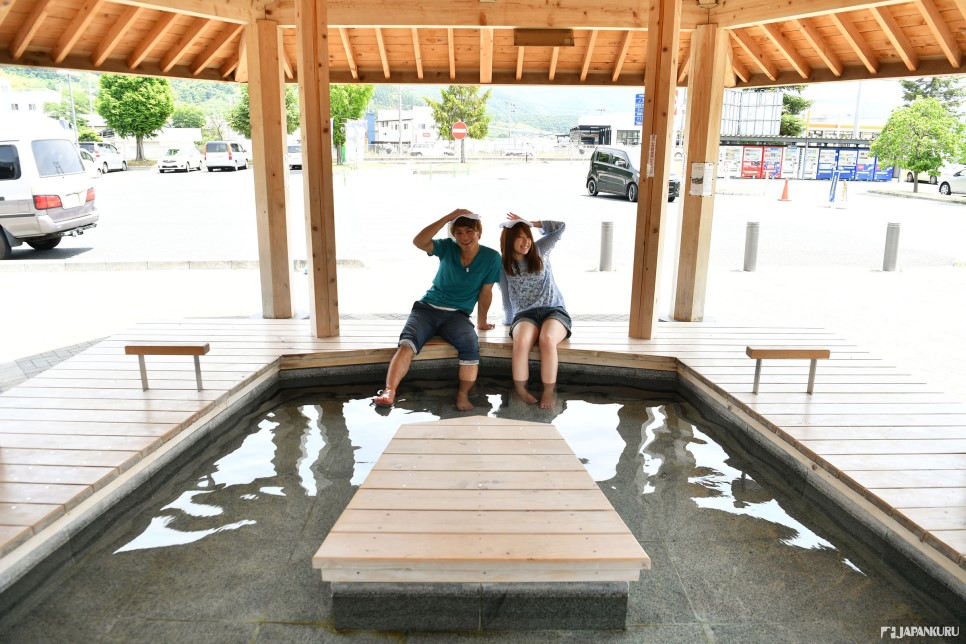 During road trips it's important to make pit stops. Here you can stop for some food, drinks, and even a nice free Japanese foot bath! It gets your circulation going getting you ready to go for further adventures! 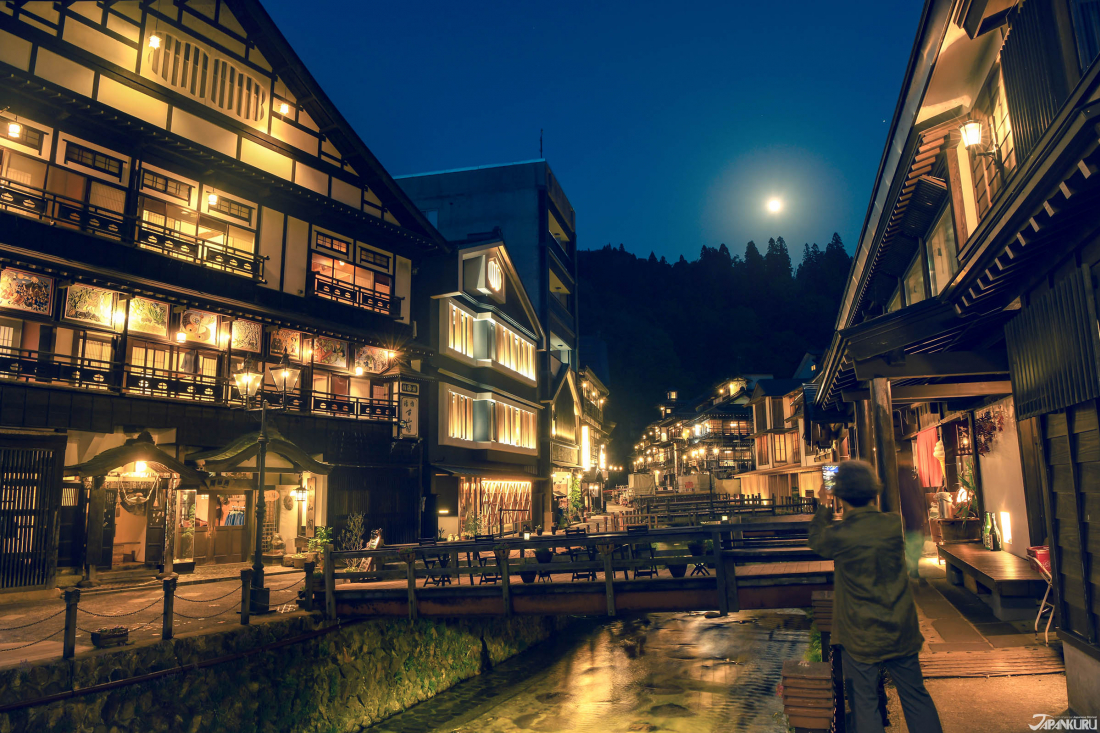 
Ginzan Hot Spring (銀山温泉) is a historic hot spring area in Yamagata Prefecture. It's said that the area was originally a silver mine that operated from 1456 to the end of the 1600s. The hot spring was apparently discovered by chance by the coal mine workers, then was flourished into a hot spring resort in 1741. 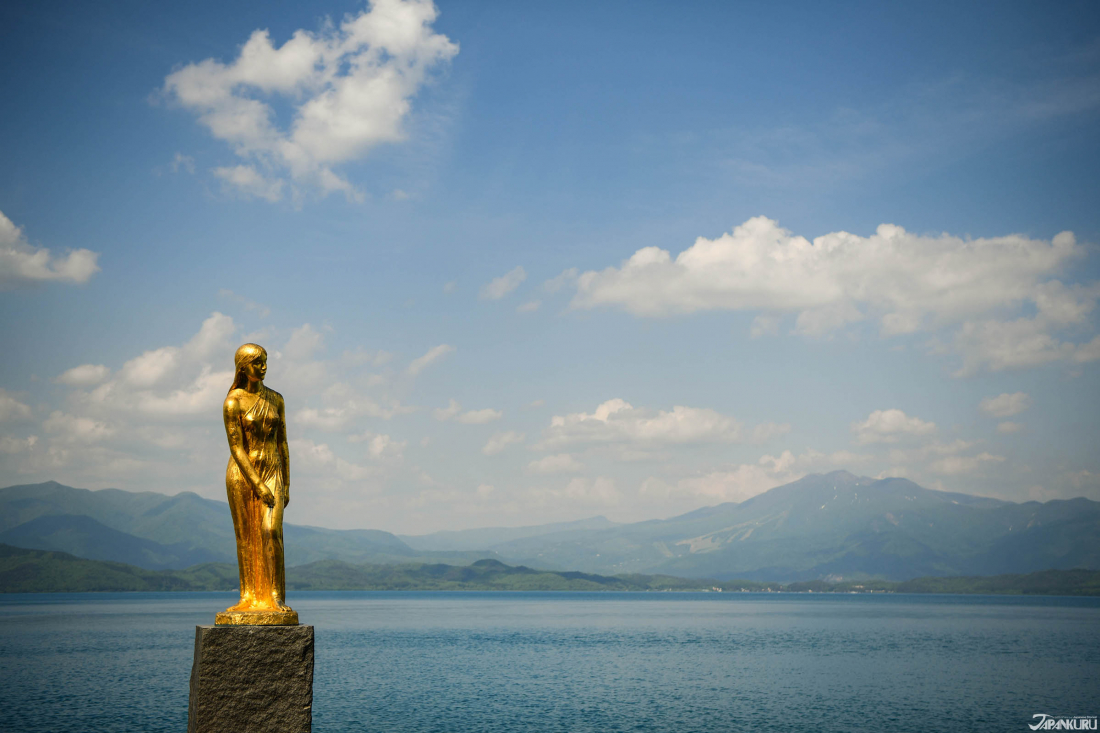 
Not only is Lake Tazawa (田沢湖) known for its stunning waters constantly changing shades of blue and green, it's also Japan's deepest lake (423m/1387ft deep)! The most iconic spot at Lake Tazawa is the golden beauty, the Statue of Tatsuko. There is a myth that goes with it, and it is said that a beautiful woman named Tatsuko wished and prayed for her beauty to last eternally. However ended up being cursed by the gods and turned into a dragon, sinking into the lake below. 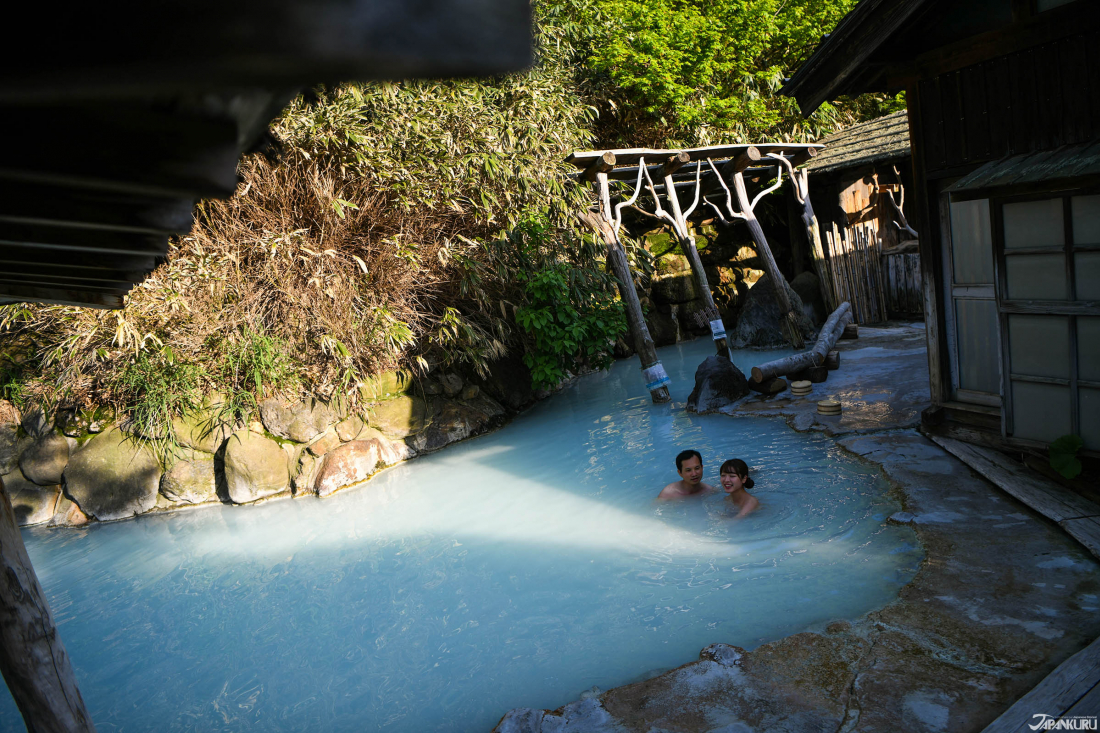 
There are about 10 hot springs in the area, and you can enjoy each hot spring water in 7 different accommodations. Nyuto Onsen (乳頭温泉郷) is a rural hot spring resort in Towada-Hachimantai National Park (in Semboku City, Akita) and consists of Japanese-style hot spring spas scattered around the base of Mount Nyuto. Especially, "Tsurunoyu" (鶴の湯), a place inside Nyuto Hot Springs where the hot springs baths aren't separated by sex! Everyone bathes together! It's something you can hardly find anymore in Japan. 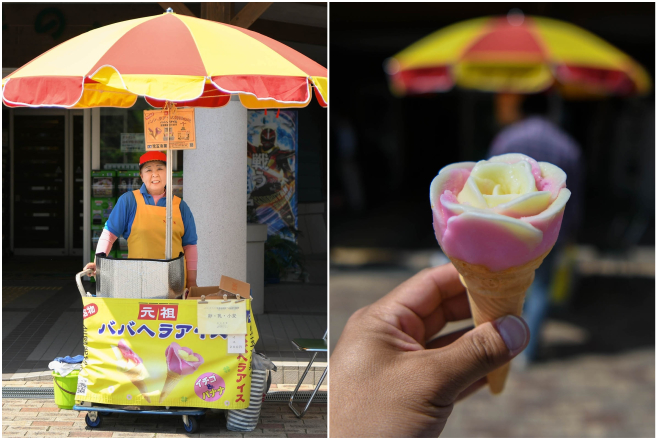 The Akita region has unique street food that isn't easily found in other areas of Japan.
Here is an ice cream stall named "Baba Hera".
"Baba" means grandmother in Japanese,
and she uses a tool to spread ice cream called "hera".
It's a rare sight in Japan, even Japanese people are surprised when this see this stall! 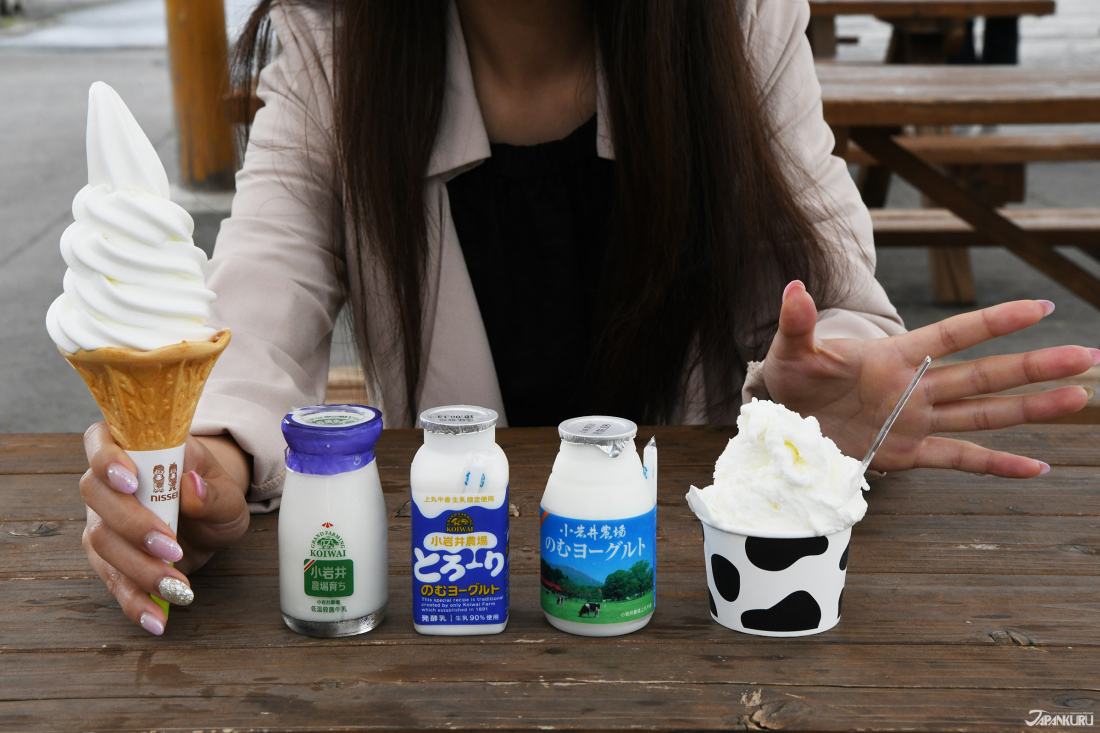 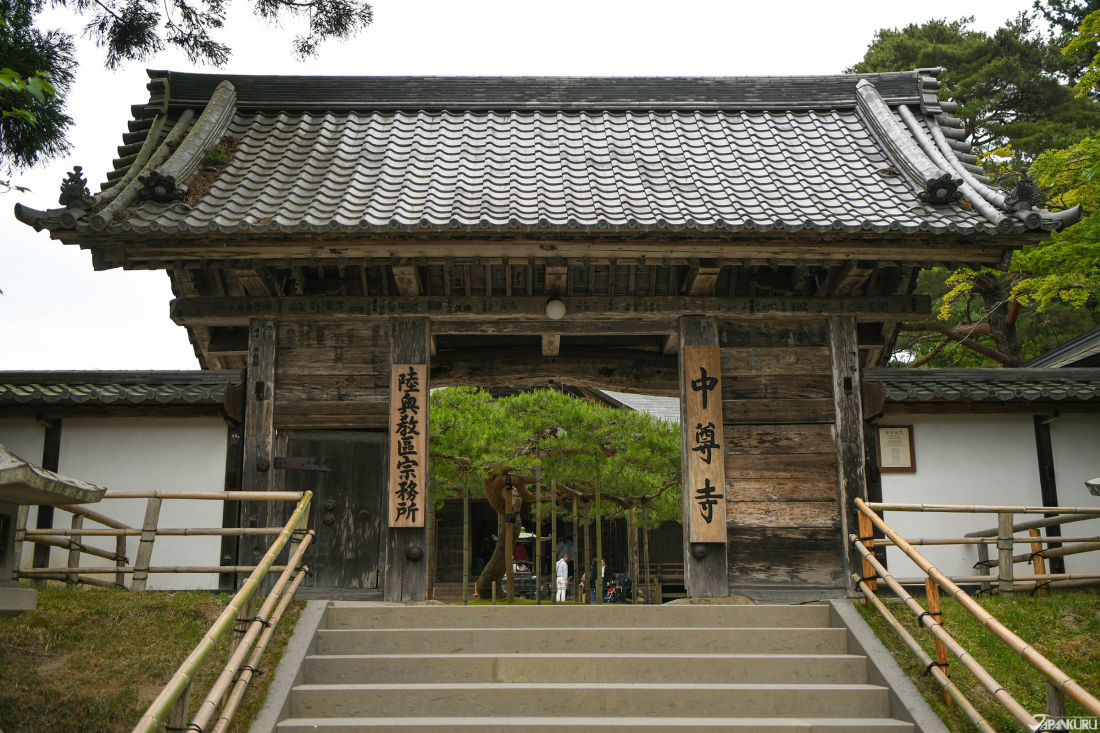 
The next course from Koiwai Farm was Hiraizumi that's located in the southern part of Iwate Prefecture. Hiraizumi is connected with the fate of one of Japan's greatest heroes, the warrior Yoshitsune. The Buddhist temples in the Hiraizumi area have remained an important part of Japanese culture and history. Resulting in Hiraizumi and the temples being listed as a World Heritage Site in 2011. In particular, the temple called "Chusonji Temple" (中尊寺) was founded in 850, and Buddhist monuments are still preserved to this day, and it is said that a typical building style of Hiraizumi culture can be seen.