In Tokyo, early summer means fresh greenery, long drizzles, and hydrangeas! And the Hakusan Shrine is the place to see it all.

The Perfect Little Outing for a Rainy June Day

When you're traveling, whether you're headed to the beach, a busy city, or a high mountaintop, you're always hoping for good weather. It's easy to get disappointed when rain spoils your plans, no matter how beautiful your surroundings might be, and even if the forecast warns you days in advance. But in early summer, if you know where to look, the rain can make your trip even more uniquely beautiful.

Last year, on a drizzly day in June, I had a sudden urge to head out into the inclement weather and spend some time at Tokyo's Hakusan Shrine, and I was rewarded with hydrangeas glittering in the falling rain. 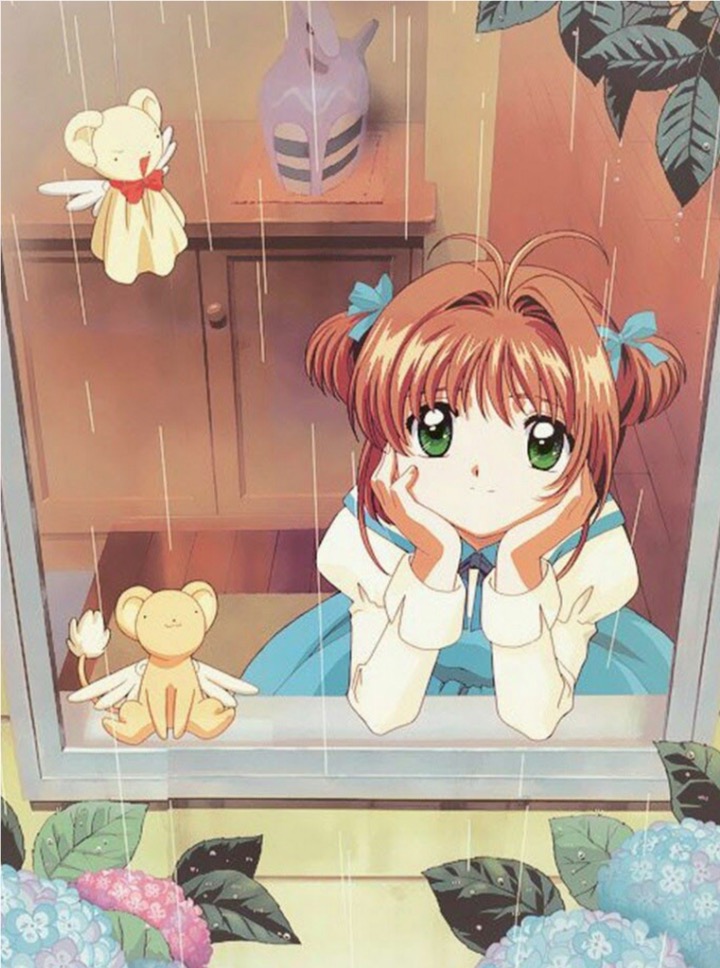 Long ago, after seeing scenes of Japan's early-summer rainy season in animes like Cardcaptor Sakura and beautifully rainy shots of Shinjuku Gyoen National Garden in Makoto Shinkai's movie The Garden of Words, I was inspired to start taking walks on rainy summer days. But back when I lived in Taiwan, I had to travel into the mountains to see hydrangeas, and heading out on a rainy day just seemed ridiculous. Fortunately, hydrangeas are a little more commonplace in Japan. You'll see them lining city streets, in residential areas, decorating shrines, and adding color to public parks. So a rainy day walk to see the hydrangeas seems a little less silly, and a little more dreamy. Now that I'm living in Tokyo, my options have opened up, and on this day my destination was the Hakusan Shrine.

The Hakusan Shrine in Tokyo's Bunkyo Ward is an offshoot of the Shirayamahime Shrine in Ishikawa Prefecture, which was originally established in the Heian Period, when the region was still known as the Kaga Province. This little Tokyo branch, however, is known for its hydrangeas. There are a total of about 3,000 of the bushes planted in the shrine and nearby Hakusan Park, and when the hydrangeas come into full bloom each June, the area holds the Bunkyo Hydrangea Festival to celebrate.

When I visited last year, the 2020 hydrangea festival had been canceled due to COVID-19. Of course, that didn't stop the hydrangeas from blooming! So I found myself the perfect rainy day, grabbed my camera and a sturdy umbrella, and visited the shrine. 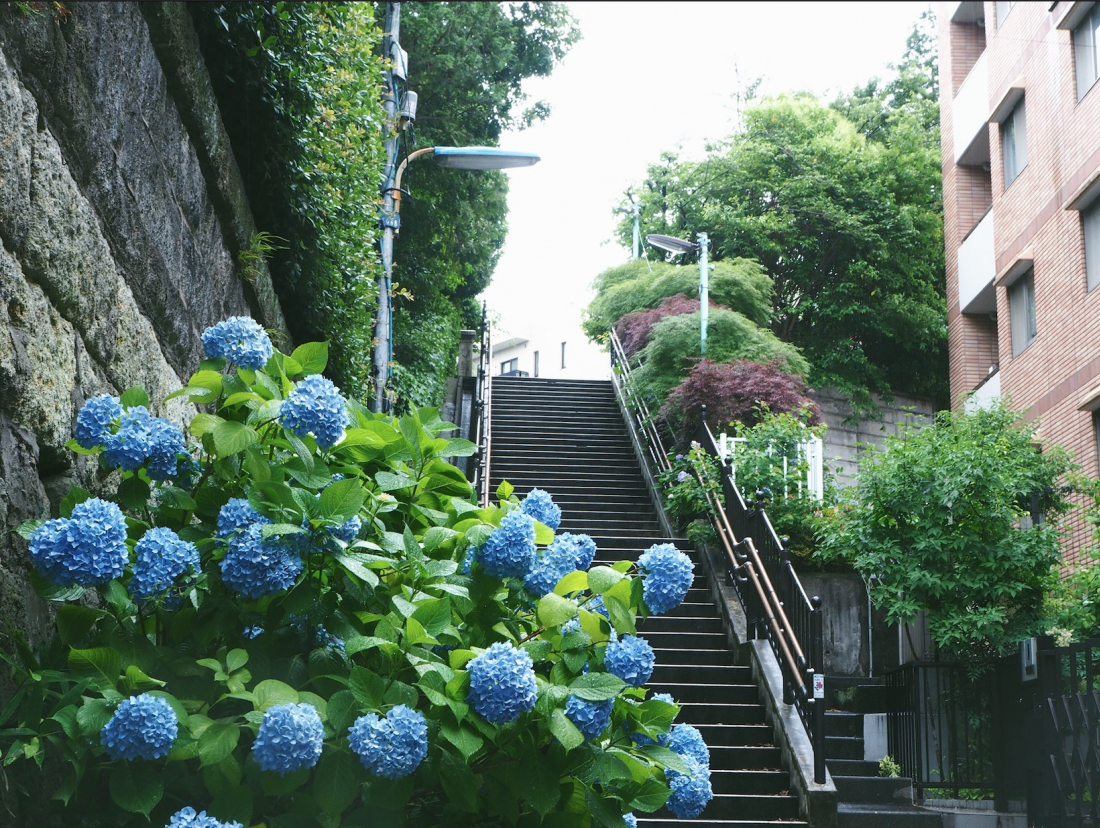 I decided to take the cheapest route from my house to the shrine, which ended up having me get off the train at Sugamo Station and walk 20 minutes or so to Hakusan Shrine. The Google Maps route didn't lead me to the shrine's main entrance, but it did take me past this view of the hydrangeas blooming in front of a classic Tokyo hillside staircase. Whenever I climb a set of stairs like this, I can't help but look forward to whatever view greets me at the top!

At Hakusan Shrine... well, my first view was the parking lot. Oh well, that's my fault for choosing a route that skipped the main entrance! 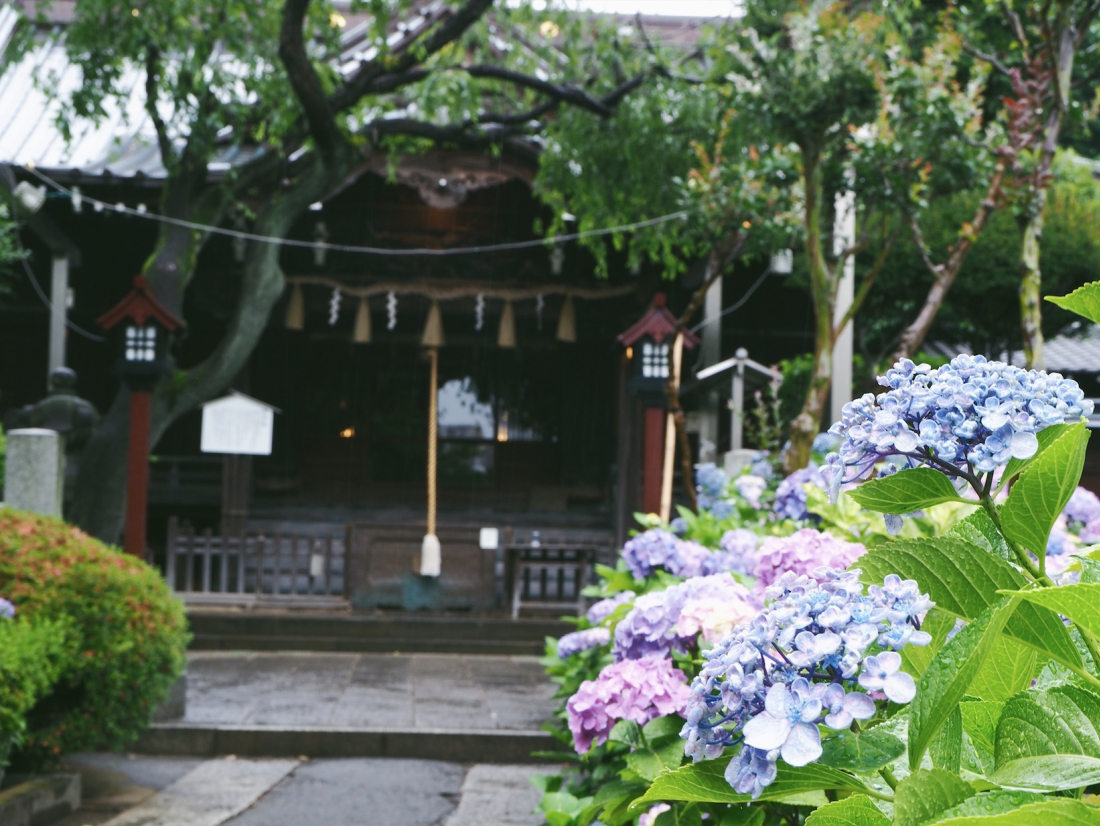 Finally within the boundries of the shrine, I saw the pale blue and purple hydrangea bushes lined up along the path, guiding visitors to the main shrine building. Despite the weather, there were one or two other people exploring the shrine, who mostly seemed to have their cameras or phones out just like me, to take pictures of the rainy day scenery. When the rain stopped for a moment, it was hard not to get excited about all the flowers, and I started snapping away, glued to the viewfinder. And wouldn't you know it, just as I was focusing in on the perfect shot, fitting all the hydrangeas and the shrine building in the frame, two little guys popped out from under the flowers to say hello.

Because of my love for Slam Dunk's Kaede Rukawa, I'm always happy to meet black cats! My two new friends had a bit of a scuffle right in front of me, and then they ran off together towards the garden. When I followed them, I realize they weren't just a pair―there were three black cats in total! They were such a nice surprise. 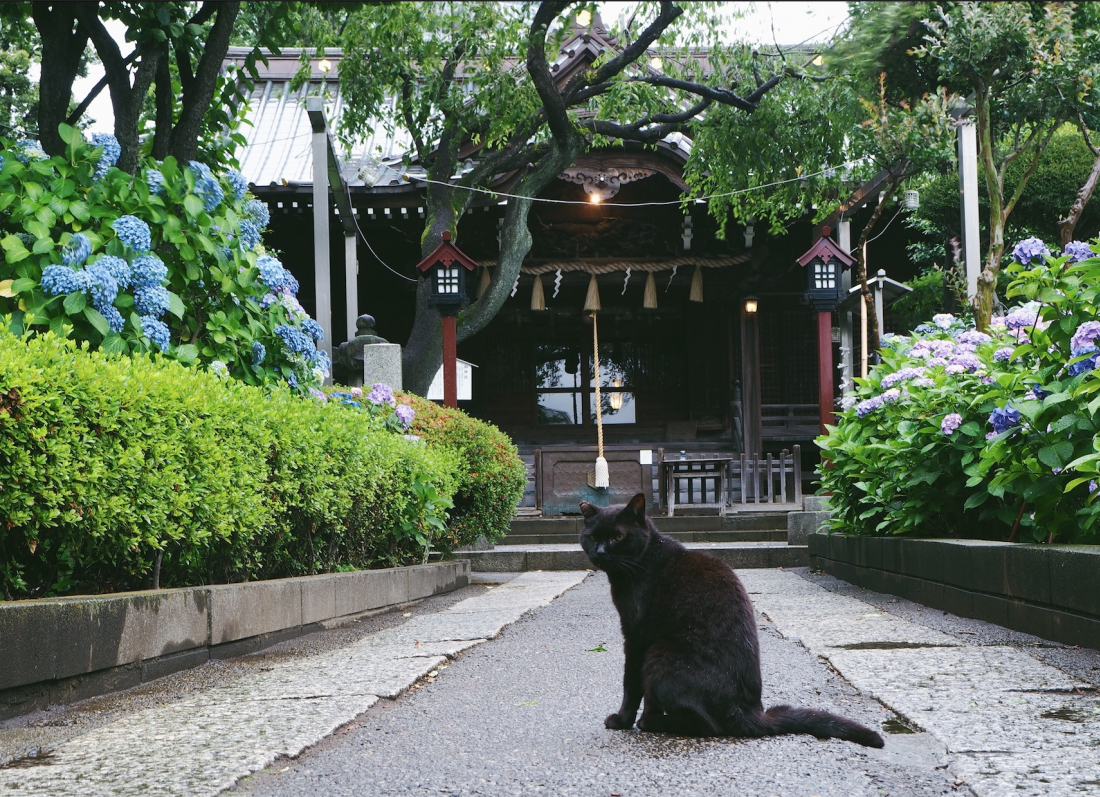 On a rainy day, shrines are quiet and can feel a little lonely, and the pressure in the air can sometimes bring down the mood, but with the colorful hydrangeas blooming and some unexpected models, this early summer day felt quite cheerful! 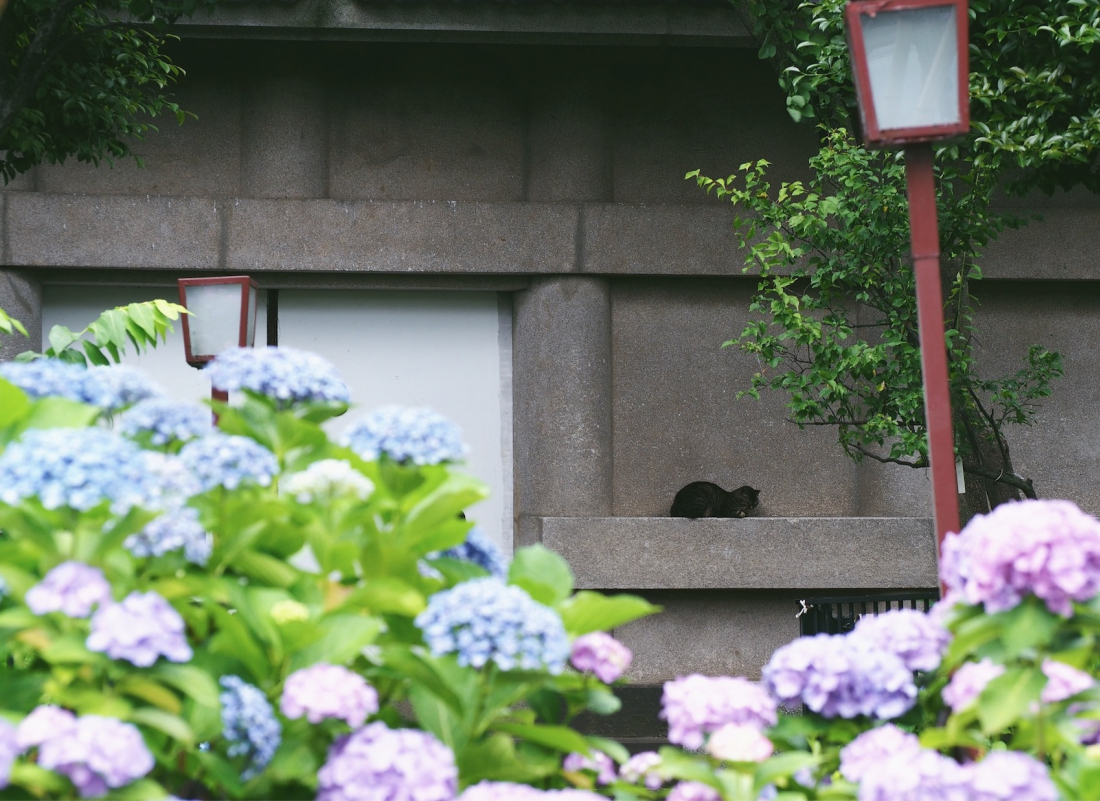 And when I started focusing on the cats, I also got to see the hydrangeas from new angles. 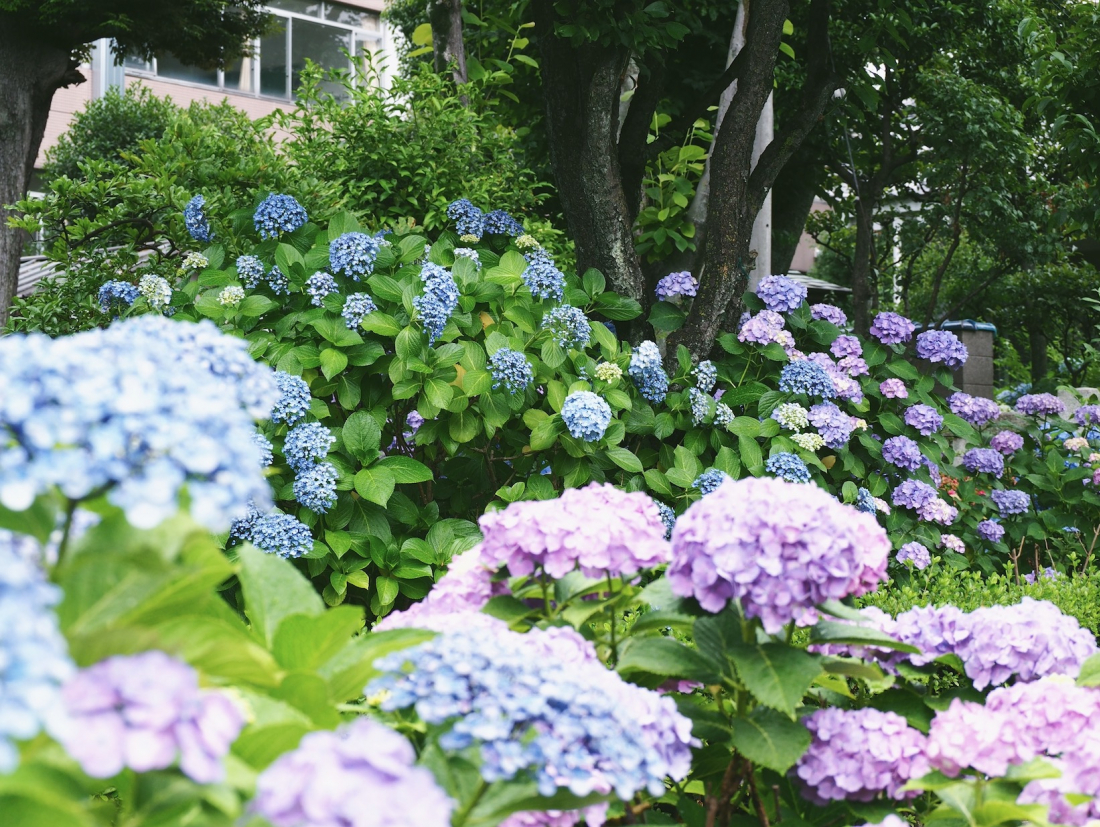 Having visited Kamakura's Hasedera and Meigetsuin Temples in the past, which are both famous for hydrangeas, I didn't really find the scale of Hakusan Shrine all that impressive. But while the flowers were less breathtaking, for a small outing, the comfortabe mood of Hakusan Shrine was perfect.

Behind the shrine, there's a little "hydrangea Mount Fuji" hill, densely covered in flowers. Visitors can only access the hill itself when it's opened for the festival, but even with the event canceled, it's still beautiful from afar! 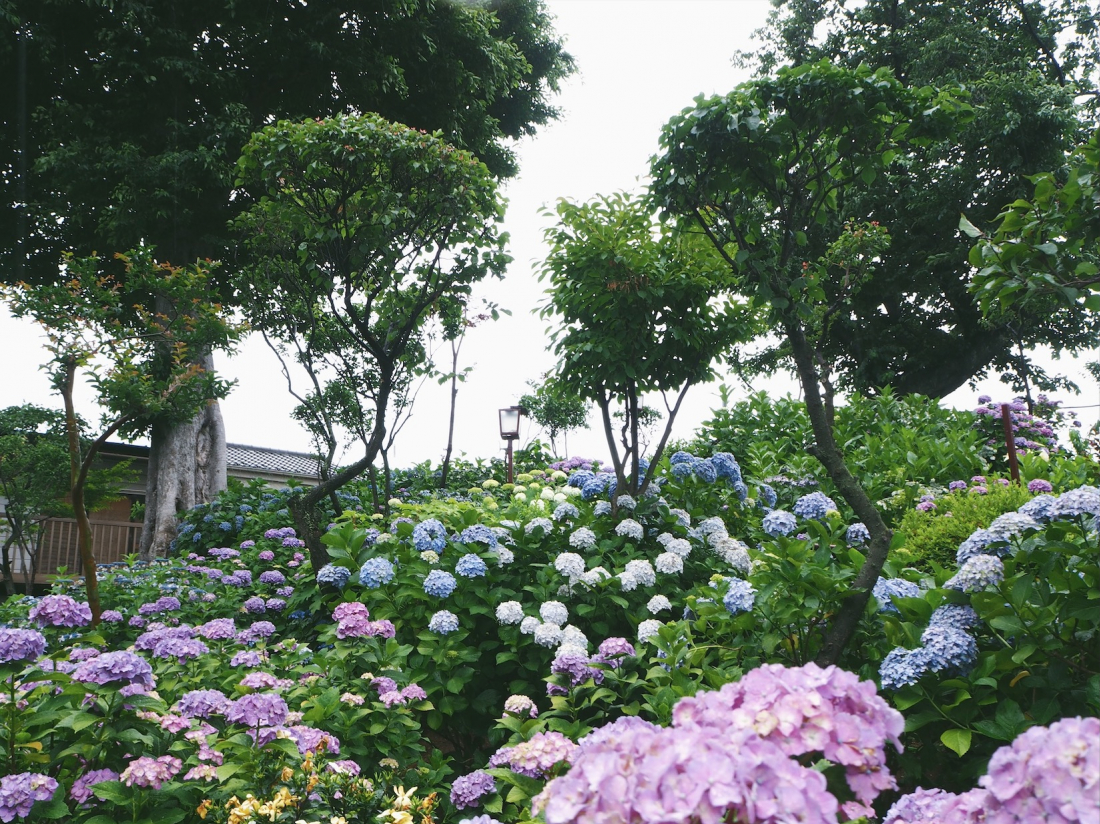 One of the joys of a place like this, with so many hydrangeas, is discovering all the variety that exists among the same type of flower! Hydrangeas are conveniently close to eye level, so you can look closely and appreciate the beauty inherent in every variety. Did you know that the PH level of the soil affects the color of the flowers? That's why each hydrangea garden will be a little different! 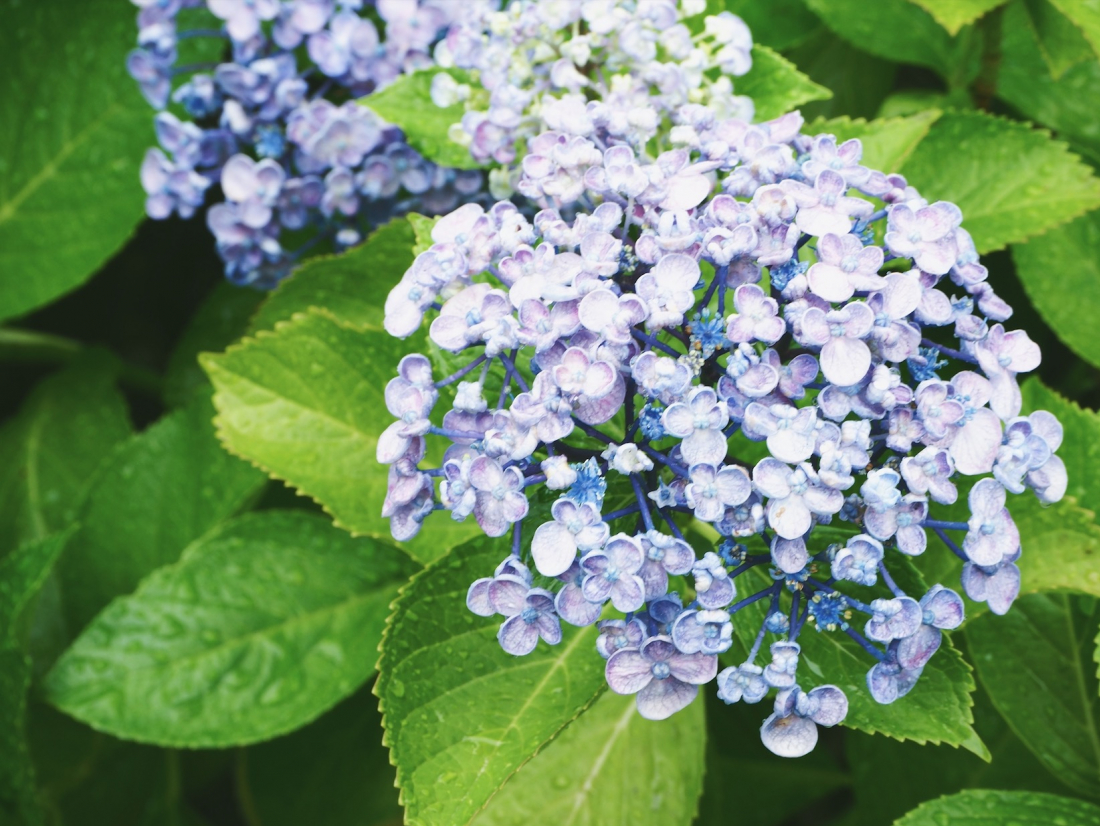 The garden has a few kinds of native Japanese hydrangeas, including the less common mountain hydrangea, sometimes called "tea of heaven," and these grow alongside imported hydrangea varieties, from America and France! 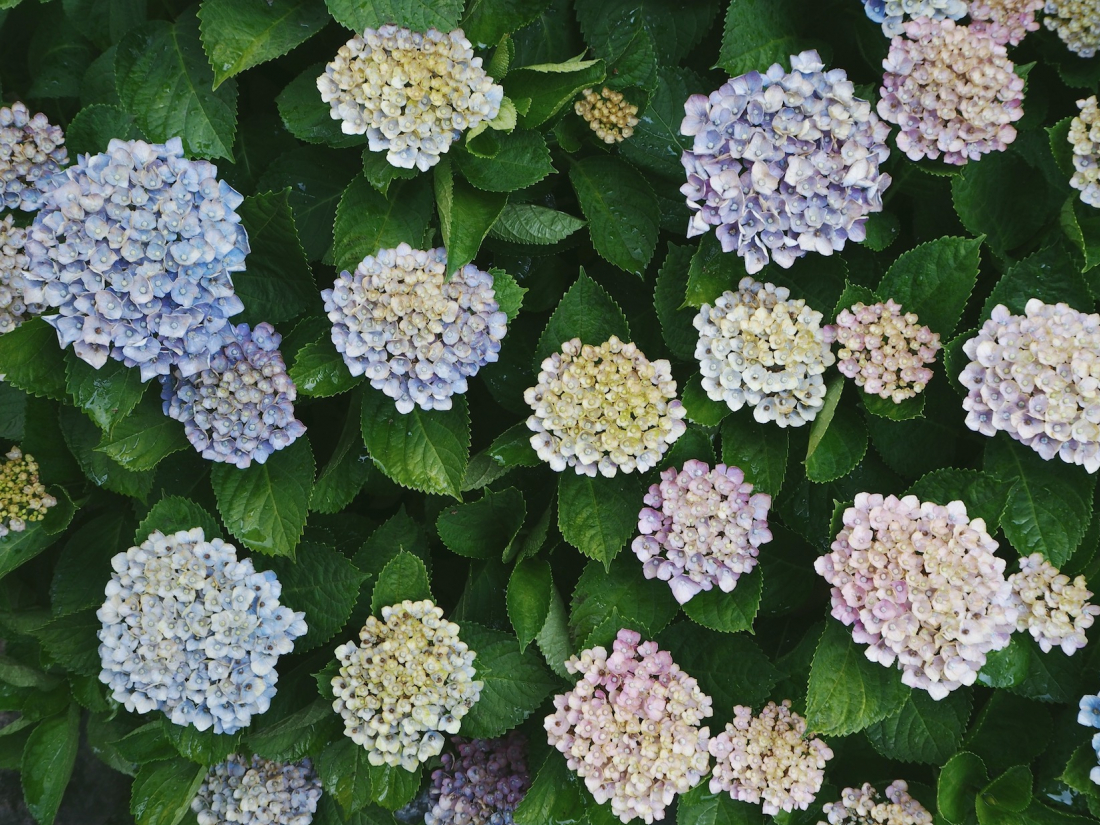 I was particularly taken by the color of the hydrangeas that I found right next to the Hakusan Shrine gate, with faint reddish and blueish purples, with a little bit of yellow-green gradient. The colors made it look almost retro to me! Later, I found out that this particular color pattern was a result of the bush being a little past its prime, and the colors had begun to fade. But in the nearby hydrangea flower market, they were actually selling plants that looked just like this, labeled "autumn hydrangeas." It turns out I'm not the only one who likes the look! 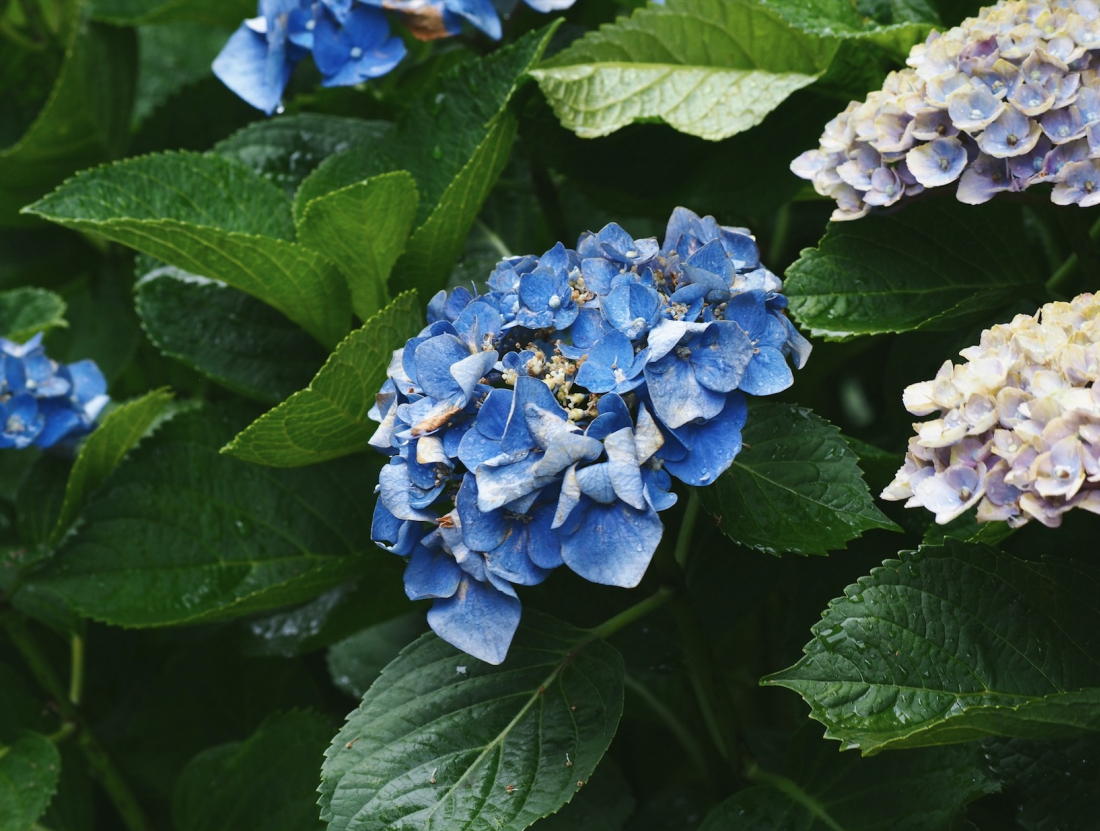 I also rather liked the hydrangeas that were a little bit dry, with each of the petals fading from the original color into a pale, withered yellow. Interestingly, living in Japan, I discovered that hydrangea flowers don't just fall off the bush on their own. Even after hydrangea season is over, the withered flowers just stay on the bush if you leave them there, which is why you'll sometimes see hydrangeas with dry flowers in autumn or winter. However, when the flowers are being carefully taken care of, the flowers are generally cut off to encourage a better bloom the next summer. 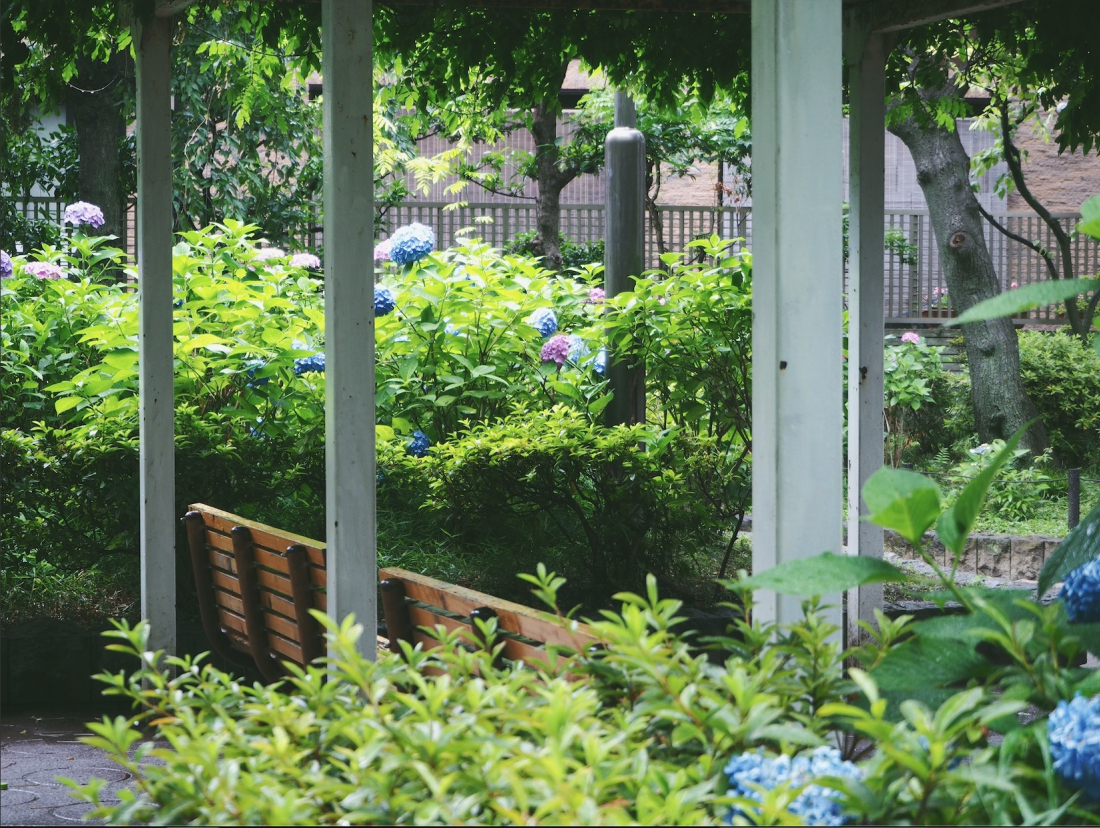