You've never seen azaleas look like they do in this historic Japanese shrine garden. 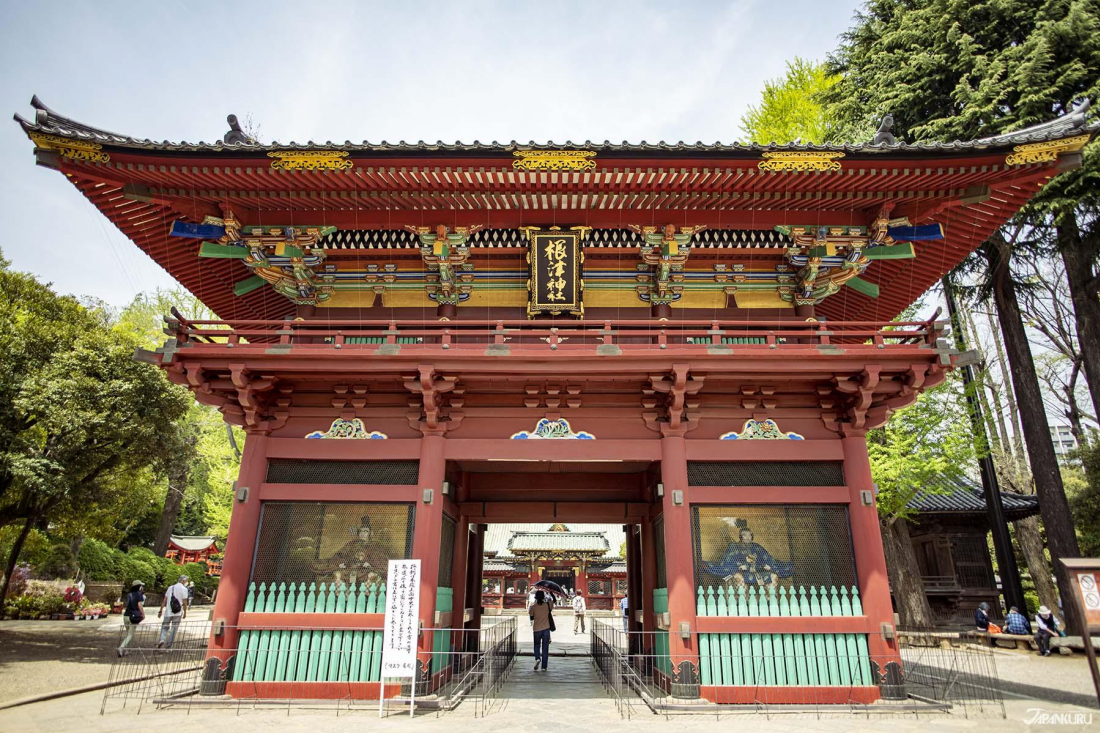 One of Tokyo's oldest shrines, Nezu Shrine was founded almost 2,000 years ago, allegedly by Prince Ousu (also known by the name Yamato Takeru), a semi-legendary figure from Japan's oldest histories. Perhaps it's only fitting that the prince decided to enshrine the god Susanoo-no-Mikoto, as it's said that Susanoo was the one who discovered the sword that Prince Ousu later used. While the Nezu Shrine buildings aren't quite as old as the legends of its establishment, the beautiful structures standing today were built more than 300 years ago, back in Japan's Edo period (1603-1868). Later, when the Meiji Revolution brought the Japanese emperor to Tokyo, Nezu Shrine even became one of 12 specially designated Tokyo shrines to receive an imperial messenger - now just 10 shrines called the Tokyo Jissha. These days, this shrine is at the heart of Tokyo's Nezu neighborhood, and an important landmark in the larger Yanesen Area. 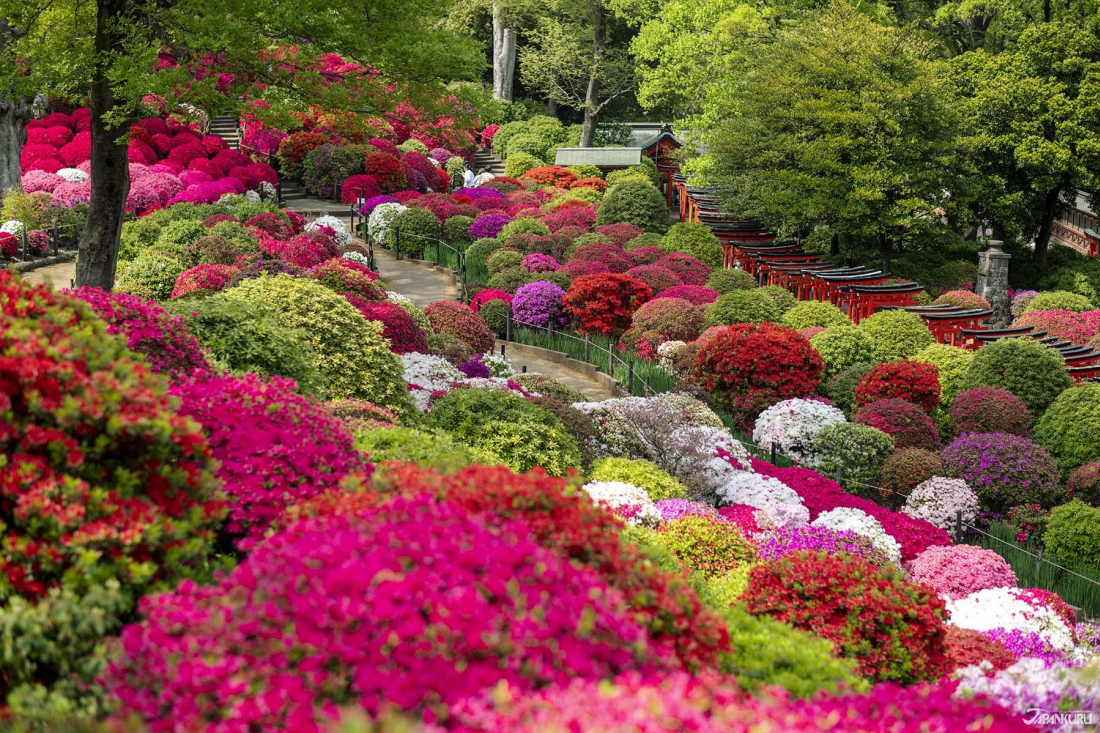 The ancient history isn't all that makes Nezu Shrine famous today, however. As the site of the yearly Bunkyo Azalea Festival, the shrine garden covers a broad swath of hillside with as many as 3,300 azalea bushes in just about every shape, size, and color. The endless number and vivid colors of the flowers are hard to believe - if you think the pictures look amazing, wait till you see the flowers in person! 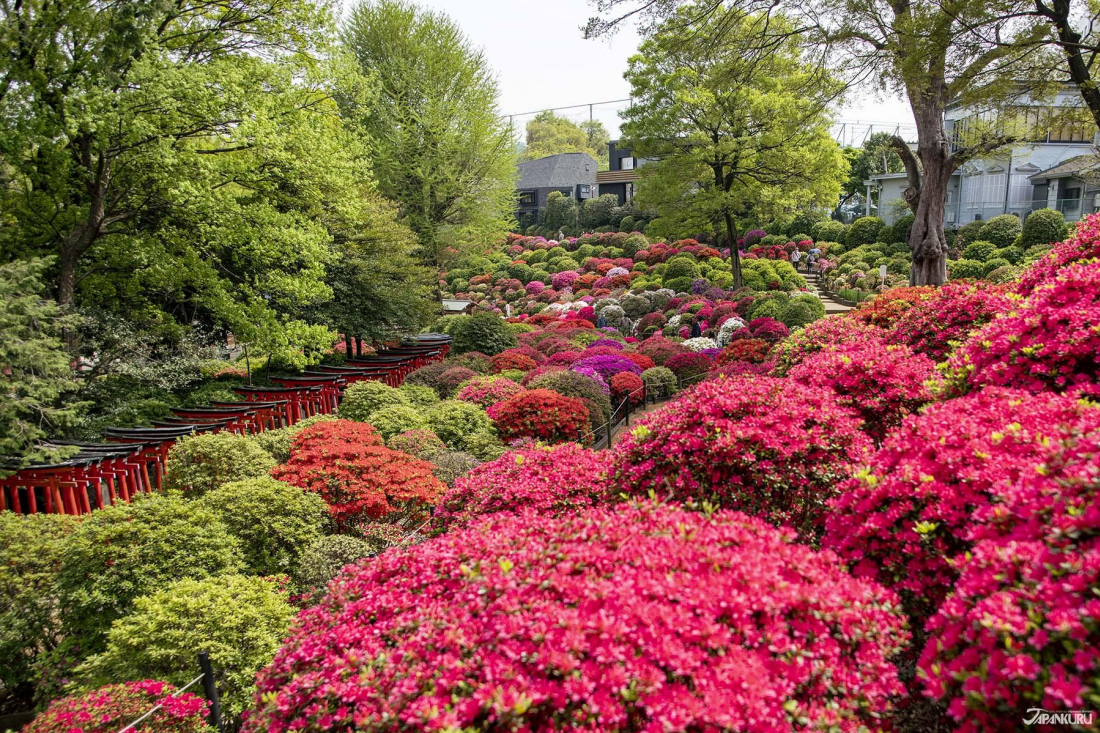 The wide variety of azalea types scattered throughout the garden are not just chosen to maximize the garden's beauty, but also to extend the season. Different bushes come into full bloom at different times throughout the season, which means the garden is lovely to look at from early April each year all the way through early May! Visitors to the shrine can always see the garden from the bottom of the hillside, but entrance to the garden paths is 300 yen. 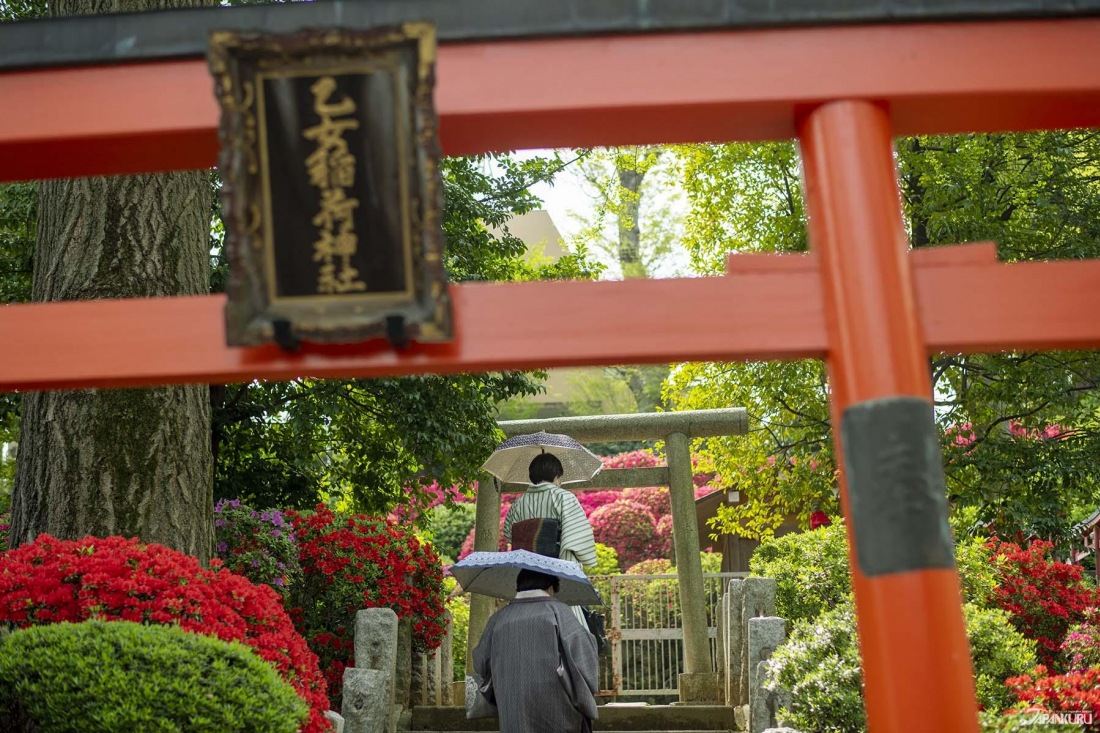 Within the Nezu Shrine grounds, another, smaller shrine is waiting to welcome visitors under its little red gates. Otome-Inari Shrine, as it's called, is dedicated to the same god as the famous Fushimi-Inari found in Kyoto, and as an Inari shrine, it also comes with the so-called "thousand gates" that Kyoto is so famous for 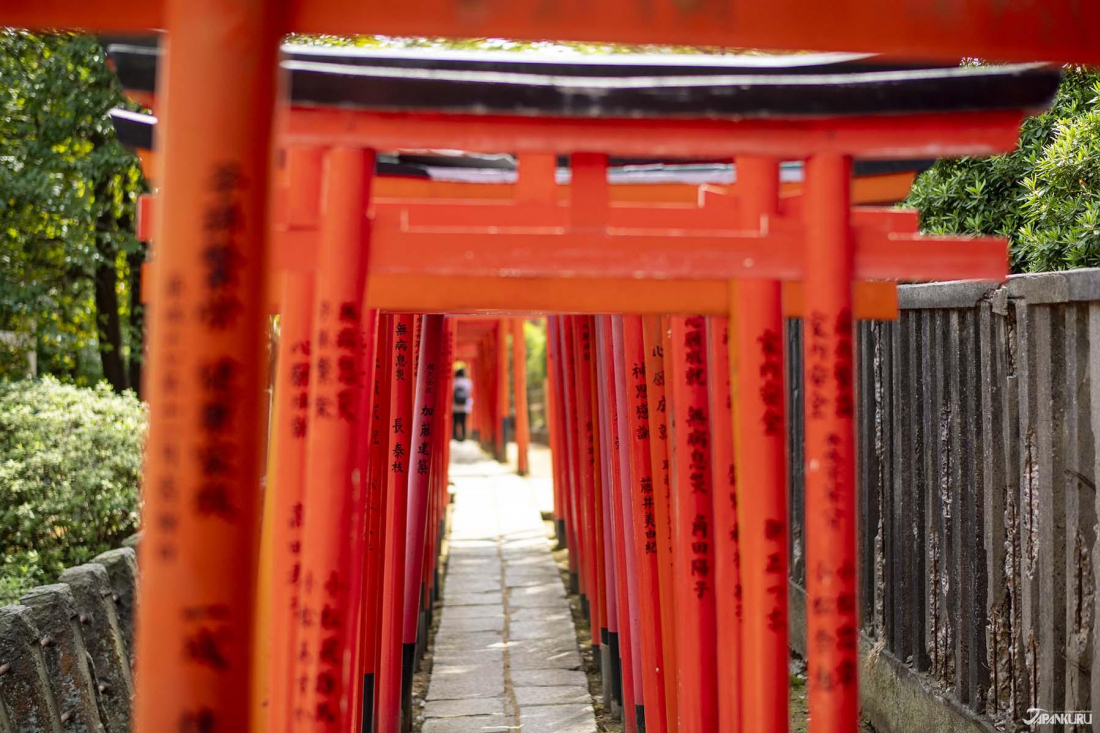 While the actual number of red wooden torii gates at Otome-Inari Shrine doesn't quite stretch into the thousands (it's closer to 200), it is one of a handful of spots in Tokyo where you can see this iconically Japanese scenery. The shrine gates are sponsored by worshippers, so if you'd like to add to the number yourself (and get yourself into the good books of the god Inari), the price is a surprisingly affordable 100,000 yen, a bit less than 1,000 USD!

A little extra Otome-Inari trivia: Japanese learners might be wondering why the shrine is called the "Maiden-Inari Shrine" in Japanese, and surprisingly, the name actually comes from the little historic red-light district that used to be found in the Nezu neighborhood. The ladies of the night, it turns out, were particularly fond of making their prayers at the little nearby shrine. 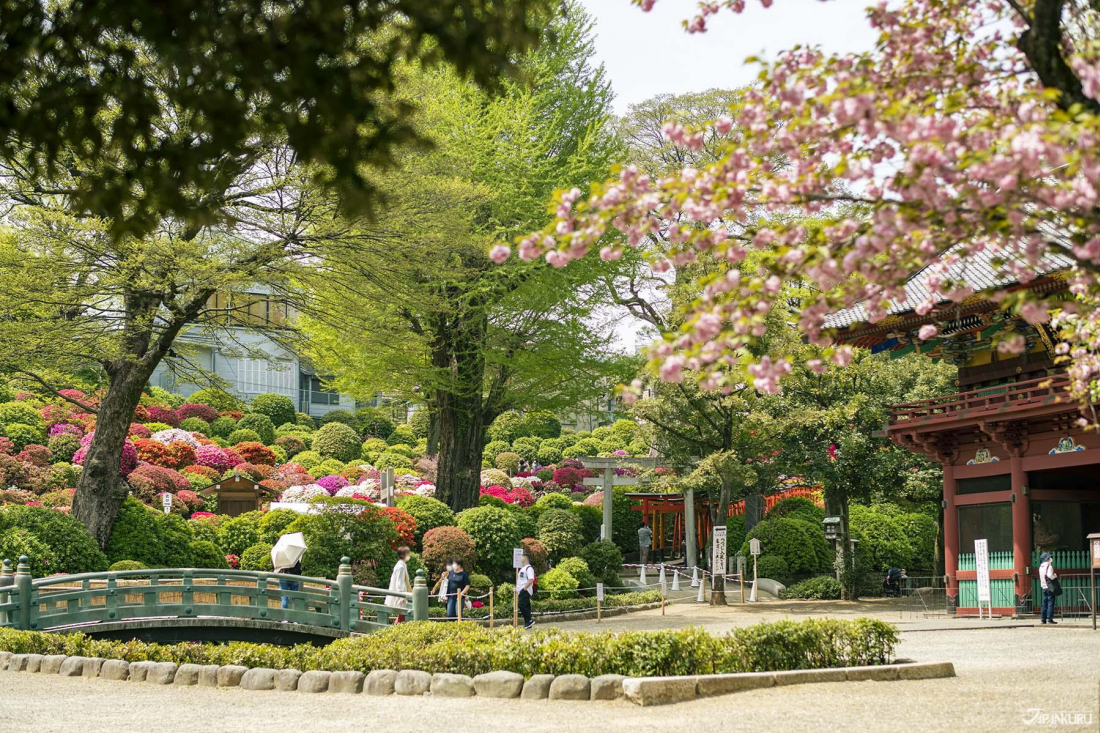 History bordering on legend, elegant Edo-era architecture, red torii gates, and a verdant green garden... whether you make it to Tokyo during azalea season or not, Nezu Shrine is certainly worth a visit! To this day, the serene shrine grounds are at the heart of Tokyo's Yanesen Area - made up of the Yanaka, Nezu, and Sendagi neighborhoods. 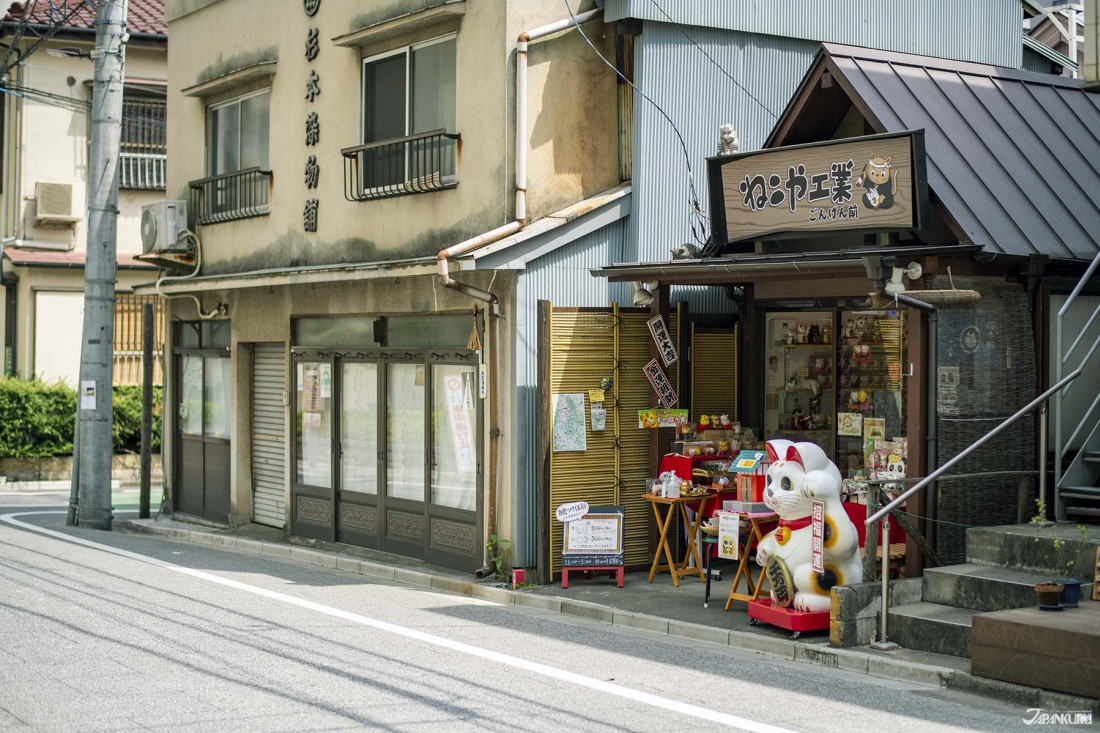 The Yanesen area, unlike so much of Tokyo, has held onto a certain kind of retro charm, thanks in part to its history as part of Tokyo's Shitamachi, where merchants, craftspeople, and other lower castes lived in the age of samurai. Between the general low-key atmosphere, and the proliferation of old little shops and new cafes, the area has become popular with a younger crowd in recent years, thanks in part to its proximity to a number of universities. For travelers looking for a relaxed day exploring a new side of Tokyo, a walk through Nezu Shrine, the Yanaka Ginza shopping street, and all the little alleys of Yanesen is the perfect plan!