A Sneak Peek Inside the Tokyo 2020 Olympic Village

A Sneak Peek Inside the Tokyo 2020 Olympic Village

Teams are arriving for the Tokyo 2020 Olympic Games, so let's take a look at where they're staying! 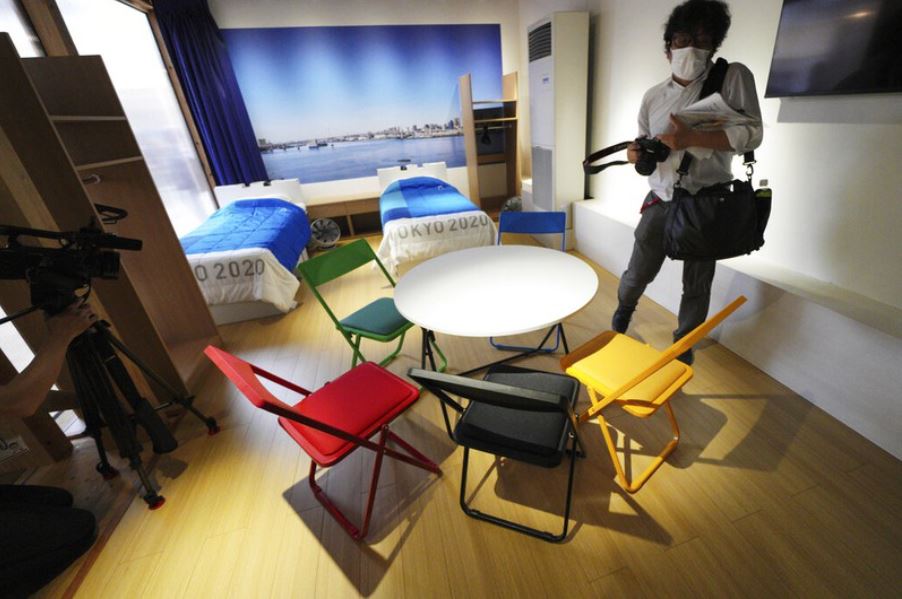 Against all odds, athletes have begun to arrive in Tokyo for the Tokyo 2020 Olympic games, defying the risks of an ongoing pandemic and mounting public disapproval to participate in a sporting event still somewhat in flux. Now that it looks like there's no turning back, and the Olympics will really be happening, of course we're all interested to see where the world's best athletes will be staying during their trip to Tokyo! Most visitors in Japan choose from a selection of hotels and traditional ryokan, but Olympic athletes spend their nights in the Olympic Village, which has in previous years been known for some rather raucous behavior. But under these unusual circumstances, what will the village look like for the (2021) Tokyo 2020 games? This weekend the media were given a tour for a little peak at these special accommodations. 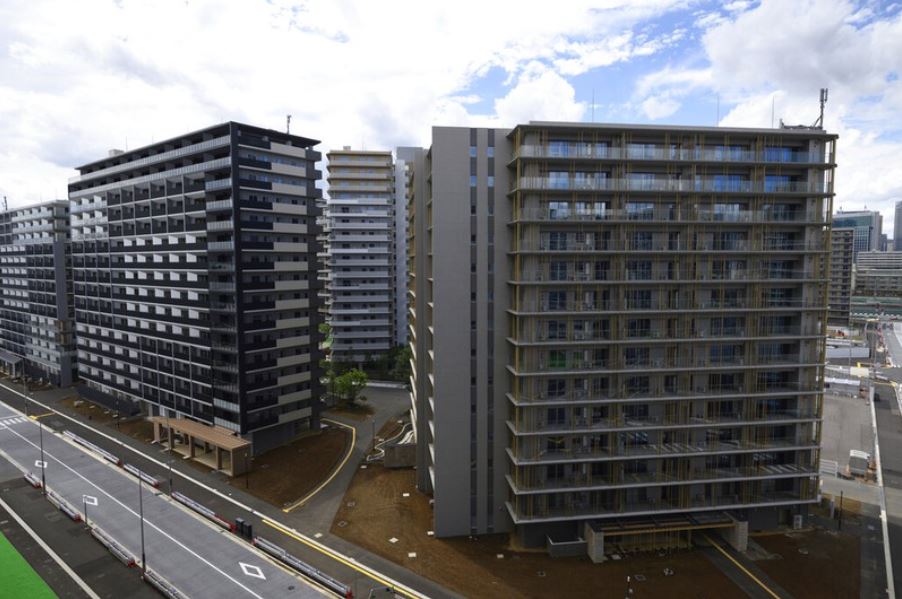 The buildings where this year's Olympians will be staying are fairly nondescript grey blocks ranging between 14 and 18 stories: 21 buildings constructed to house up to 18,000 athletes and staff during the Olympics, and then 8,000 for the Paralympics. The village's official opening day is July 13th, giving athletes ten days to move in and get settled before the games start, and the facility will stay open for about a month, until a few days after the closing ceremony. Then, the Olympic Village will open all over again for the Paralympics, accommodating athletes and staff from mid-August until September 8th.

Guests in the Olympic Village will stay in rooms with one or two beds, in apartments that house up to eight people each. Official announcements from the village have stated that they won't be handing out condoms, but that they will allow alcohol consumption on the premises, although they hope that guests will only drink alone (to avoid the spread of infection). In these shared apartments, with the convivial spirit that the Olympics inevitably revive, that request seems unlikely to be followed. 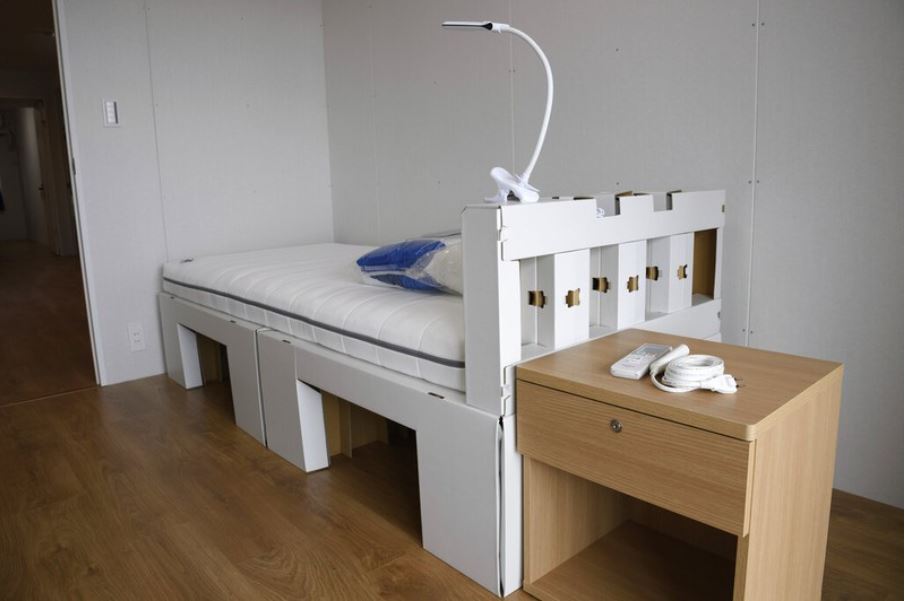 The Olympic Village is built as shared apartments because the plan is to turn them into just that after the Olympic Games! The Olympics are notorious money sinks, and are frequently the source of enormous construction projects that are barely used after the event comes to an end. In an effort to reduce the wastefulness of the games in general, after the Olympics and Paralympics come to a close, these huge accommodations will be renovated and become normal apartment buildings close to the water, in the little island-like neighborhood of Harumi. In fact, people have been buying up the apartments since years back, now―causing problems for the average people who were hoping to move in after the Olympics were supposed to finish in summer 2020.

While the Olympic Village has solid plans to be repurposed as housing, the furniture is not so easily put to use after the games, which is why the Tokyo 2020 housing is using special recyclable beds. The frames are made of recycled cardboard―and before you worry about muscle-dense athletes sleeping on cardboard, general manager of the Athletes Village Takashi Kitajima says the frames are stronger than wood, and can hold up to 440 lbs. After the Olympics, the frames will be recycled again into new paper products, and the mattresses will similarly be recycled into new plastic. 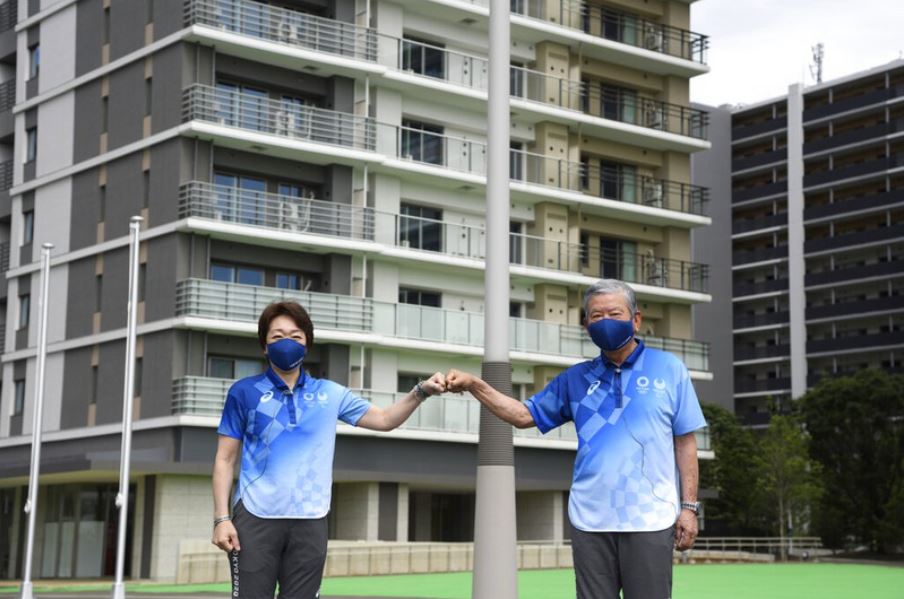 President of the Tokyo Olympic Organizing Committee Seiko Hashimoto and Saburo Kawabuchi, mayor of the Olympic and Paralympic Athlete Village, presented the facilities to crowds of journalists and photographers, and then... shared a fist bump. 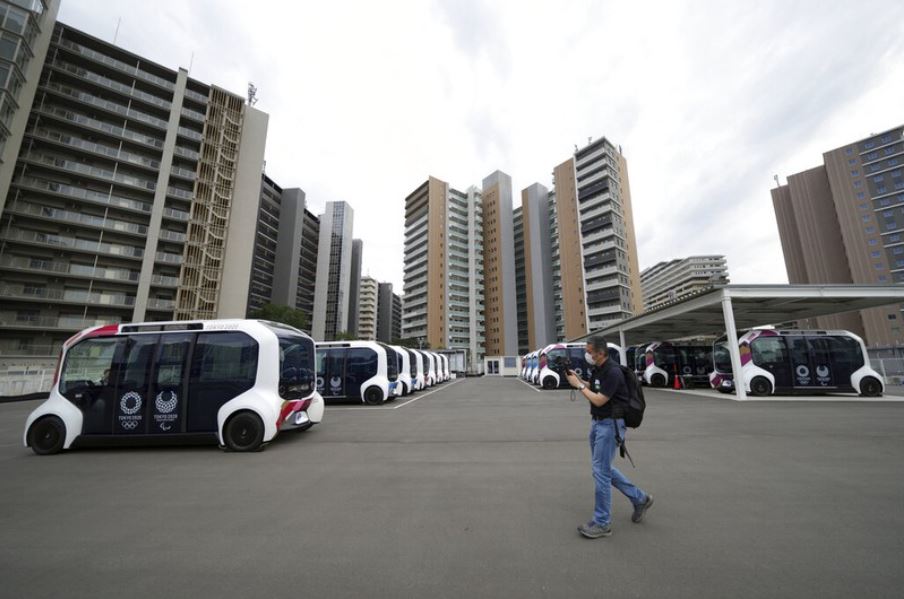 To save the athletes and staff the trouble of getting around the many apartment buildings, these autonomous electric vehicles will be used for transportation around the main facilities. 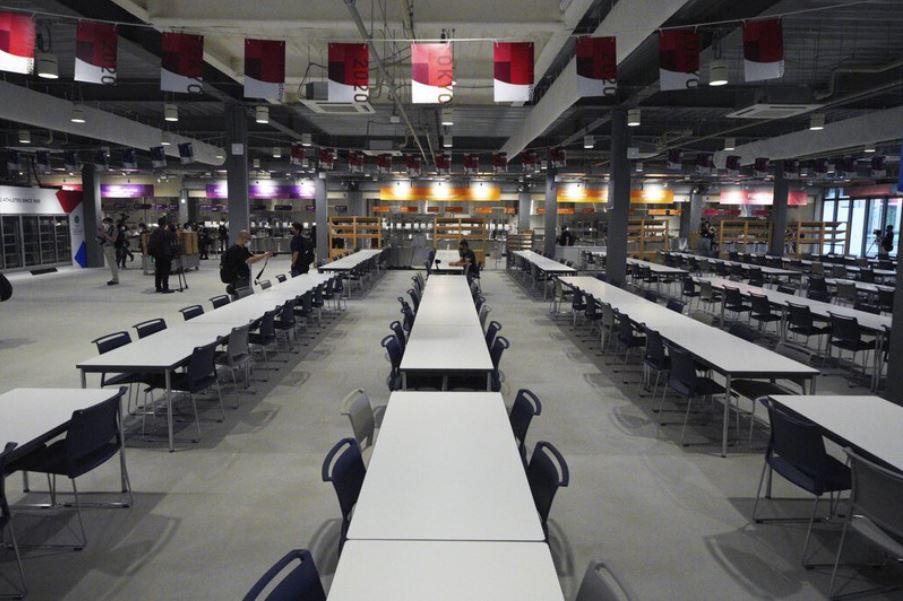 Aside from accommodations, the Olympic Village has a number of facilities to cater to the everyday needs of thousands of athletes and staff. The Village Plaza has a cafe, a bank, a photo studio, an Olympic merchandise store, a post office, a dry cleaner, and even a florist, while the even more practical facilities include a fitness center, a clinic, and the 24-hour main dining hall.

Seating in the various dining halls has been reduced to hopefully avoid the dangers of crowding, with the now ubiquitous clear acrylic panels forming barriers between diners, and meals will be served by staff to avoid athletes touching shared dishes.

When it comes to the actual food being served on those carefully prepared plates, offerings will include halal, vegetarian, and gluten-free cuisine among the dishes from all over the world, with a total of 45,000 meals offered each day. The casual dining hall will specifically be serving Japanese cuisine, however, making dishes like onigiri, tempura, and okonomiyaki using ingredients from all 47 prefectures of Japan. 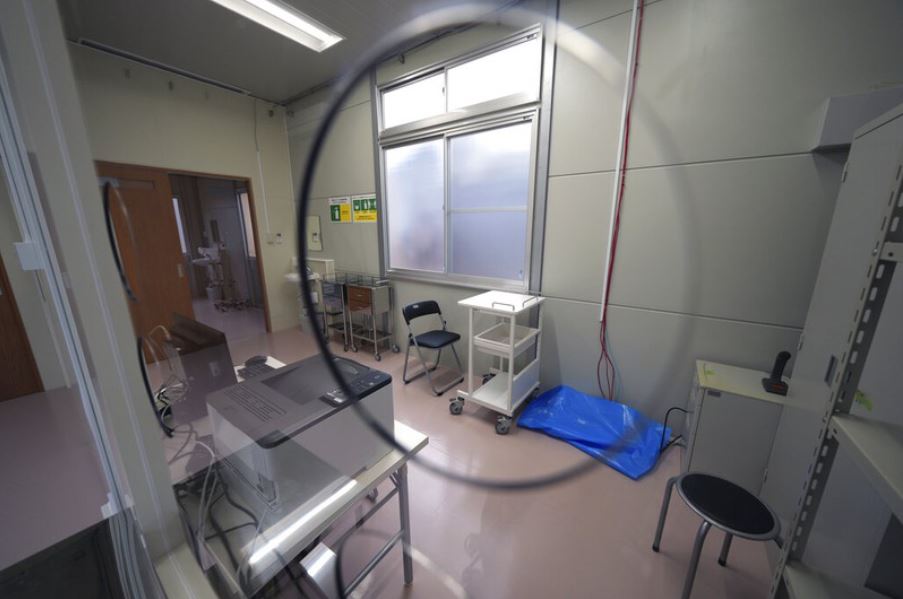 And COVID-19 transmission prevention measures will of course extend past the dining halls. While the IOC has announced that around 80% of Olympic Village visitors have been/are scheduled to be vaccinated before arriving, residents will also be tested daily for the virus, on top of being asked to practice social distancing and wear a face mask at all times aside from eating and drinking. One special facility for this Olympic Village is the fever clinic (above), which includes five isolation rooms. Plans are in place for any visitors who test positive for SARS-CoV-2 to be immediately sent for quarantine at a designated hospital. 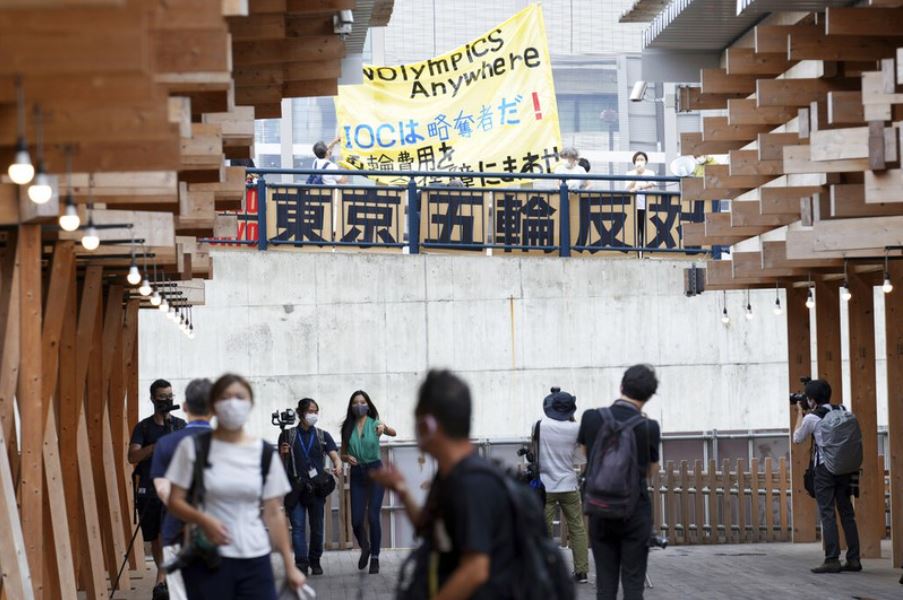 Still, despite preparations continuing on with some semblance normality, general sentiment is against the Olympics among many residents of Japan. Right up against the edge of the Olympic Village, protestors have been carrying signs opposing the hosting of the Olympics in the middle of a pandemic, and calling the IOC looters. 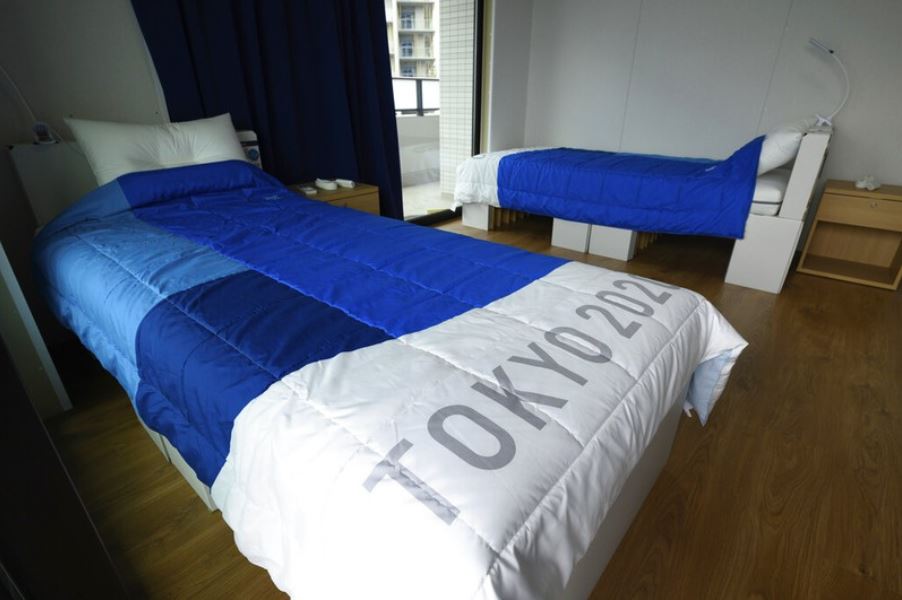 While it seems likely that the atmosphere in the Tokyo 2020 Olympic Village will be somewhat changed when compared to the party-filled athlete housing from past Olympics, it will certainly be interesting to see what that looks like in reality, as more and more athletes and staff arrive in Tokyo ready to move into the village in July.

▶ Photos and information from the Mainichi Shinbun (1, 2).