Edo Kiriko cut glass is one of Japan's beautiful traditional crafts that uses glass. At a local store in Tokyo, Kagami Crystal, you get to see Japanese artisan handiwork at its best.

When it comes to Japan's traditional craft culture, what's the first thing that comes to mind?
Lacquerware? Bamboo? Woodwork? Papermaking?
Well, you aren't wrong, but this time JAPANKURU wants to introduce to you
a beautiful part of Japanese craft making that you may have never thought of before.
We're talking about, glass!
Believe it or not, Japan's relation with glass dates way back to
as early as 3rd century Japan (Yayoi period) but it wasn't until recently the Edo era (1615-1868)
that the glass making we know today really made its mark.
Which is why this time we want to share Japan's special "Edo kiriko" with you
and where to get one of Japan's most popular glass stores in Ginza, Tokyo.

There are two primary types of glass at this store, Kagami Crystal.
Those are Crystal glass and Edo kiriko.
Crystal glass consists of a group of pure and raw materials creating a form of transparent glass.
Then Edo kiriko,
which is the main "Made in Tokyo" traditional Japanese craft in terms of cut glass,
is beyond stunning due to its meticulous and intricate cutting
that is no doubt only something a Japanese craftsman/craftswoman can produce.

How do you cut such delicate pieces of art though?
We'll get into that later, but first, it's important to know what "cutting" is.
Cutting refers to the glass products, using a particular cutting method,
being cut by discs made of emery, stone, etc.
so that lines, patterns, and other figures appear in the glass.
Under different lights and angles,
the pattern will produce different visual effects making it a very delicate process.


Edo Kiriko (江戸切子) is a traditional Japanese glass cutting art that originated during the Edo period.
It's said it began with transparent glass then gradually moved to using colored glass like yellow, red, blue, etc. What makes Edo Kiriko exceptional is its intricate manually cut patterns. The patterns used are simple yet gorgeous. In a way, they are similar to patterns one might see on Japanese kimono such as chrysanthemums, bamboo leaves, and geometric shapes.
In 1985, Edo Kiriko was designated as a traditional craft of Tokyo and in 2002, was recognized as an official traditional handicraft of Japan! It's easy to see why too! These multi-layered glasses are stunning beyond belief.
"Kiriko" (切子) means "facet" in Japanese, and it refers to the multitude of decorative patterns that are engraved on the surface of the glass using grindstones and other tools. Using only rough outlines as guides, artisans carve the detailed but accurate lines freehand.

What is the traditional Edo Kiriko cutting process??
First, let us say that there are a wide range of grinding wheels used when cutting Edo Kiriko!
💎Waridashi (割り出し) (calculate) or Sumitsuke (ink application) - using ink to divide and draw a basic outline of the patterns (normally it's just the starting lines) to be cut in the glass.
💎Arazuri (粗刷) (rough grinding) - do the basic glass cutting following the outline they drew. Some places use a mix of emery and water to cut the glass.
💎Sanbankake (三番掛け) - apply finer grain emery powder or a different disc to obtain a more detailed pattern of cutting.
💎 Ishikake (石掛け) (whetstone grinding) - using a whetstone grinder to smooth out and define the patters in the glass cut up to this point.
💎 Migaki (磨き) (polishing)
💎 Bafukake (バフ掛け) (buffing) 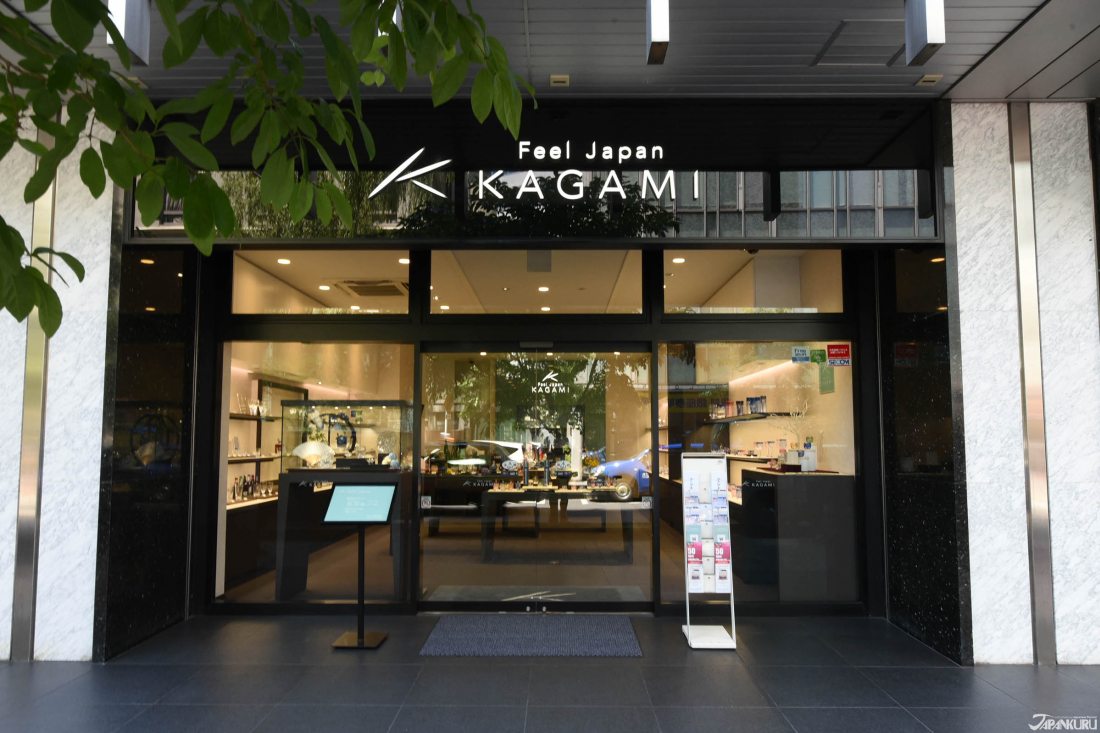 Kagami Crystal established Japan's first crystal glass factory in 1934. The crystal glass and Edo Kiriko produced by Kagami Crystal not only won at many worldwide expos, but it's even beloved and used by the Japanese royal family, the Ministry of Foreign Affairs, and so on. If you go inside, you'll even see SHISEIDO's perfume WHITE ROSE bottle which was made from Kagami Crystal's glass, along with Suntory's whisky anniversary bottle.

Kagami Crystal not only owns original products made by its own crystal glass factory but also displays
a lot of work from local craftsmen and craftswomen.
By stopping by here, you can see how artists express their love, creativity, and persistence through Edo Kiriko.

Because of the bright colors of Edo Kiriko, Kagami Crystal also designs necklaces.
If you thought the small detail was amazing in the glasses, wait until you see the work put into these necklaces. 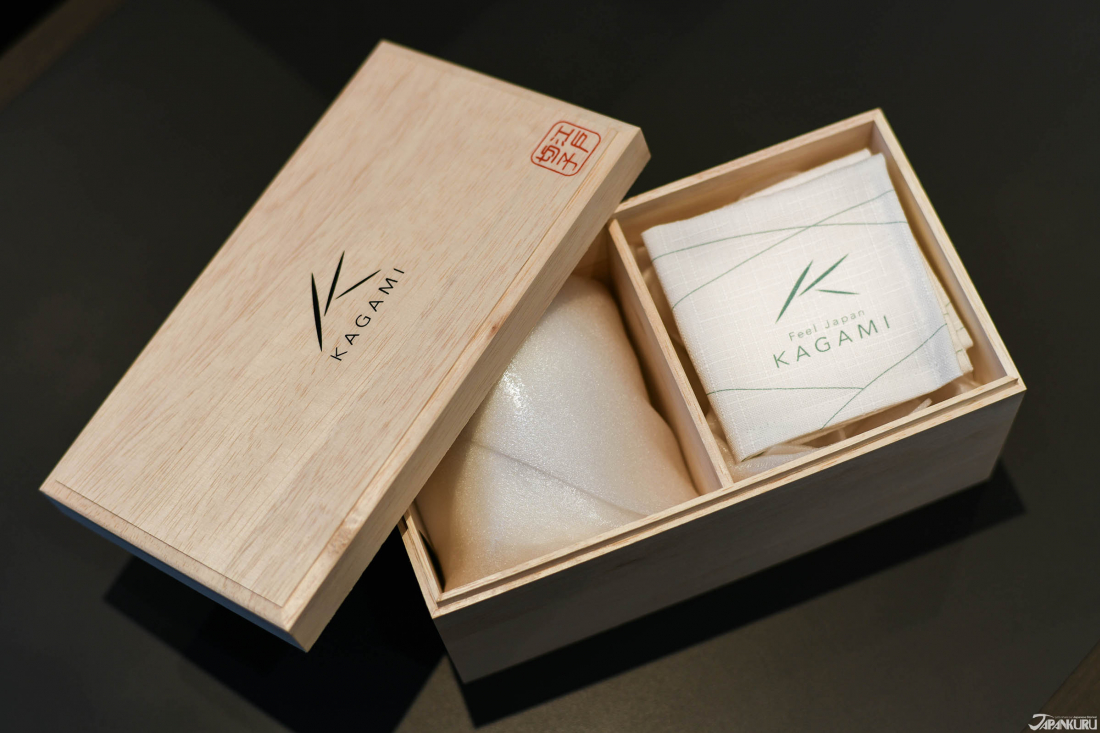 Still thinking about what gift you should come back from Japan?

Glasses are relatively cheap due to being massively produced in no time at all. However, it roughly takes more than a month for a single piece of Edo Kiriko to be made. Thus it's easy to believe when we say not a single composite in Edo Kiriko from Kagami Crystal misses the deepness in Japanese culture. Even just in pictures, you can see the true art and skill that many Japanese craftsmen and craftswomen have. Hopefully, you will have a chance to look around Kagami Crystal and maybe even pick up an Edo Kiriko glassware as a gift. Regardless of whether you give it to a beloved one or use it for yourself, it's the best souvenir that is filled with Japanese spirit.


Do you have a favorite item of Kagami Crystal's among the pictures above??
We wanna hear about it in the comment box below!
✧˖°Share your stories with us°˖✧

Stay tuned for new, original articles every day on JAPANKURU🐶.