Shopping, eating, and sightseeing in Ginza. How to have fun in this unique part of Tokyo without spending a fortune.
A Walk Through Ginza's Freshest Destinations 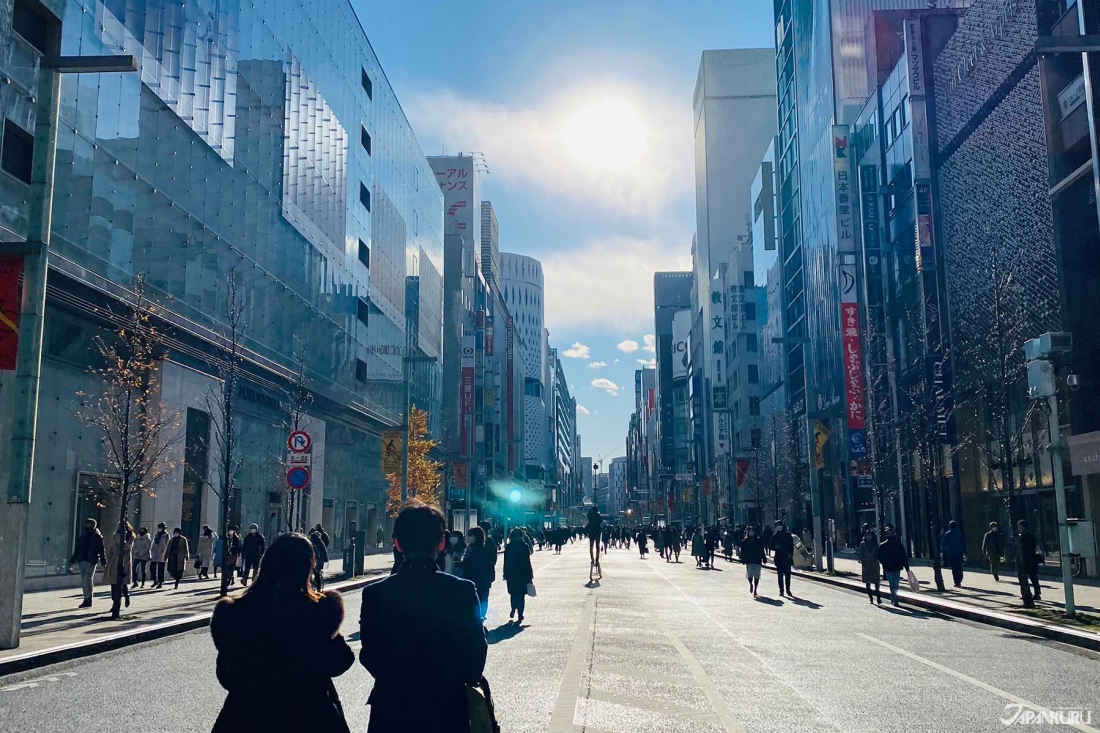 Ginza is known to be one of Tokyo's most expensive neighborhoods, with broad sidewalks and even broader streets, flagship shops for expensive international brands and luxury boutiques, and plenty of wealthy Tokyoites coming to spend with abandon. The area's opulent reputation is well-earned, since Ginza has been an upscale shopping district for well over 100 years now, and there's no better place to see some of Tokyo's classiest old ladies. But that reputation doesn't quite cover all of what makes Ginza so special, either! Ginza has a strong traditional streak, but the neighborhood also finds ways to be at the forefront of new trends and modernization, and the contrast between these two sides can be seen in the retro architecture and modern highrises, the trendy cafes and the traditional coffee shops, or even the history-filled traditional department stores down the block from modern shopping malls. There's a lot that makes Ginza cool, and you don't have to empty your pockets to see it all, either!
A Morning at the Art Aquarium 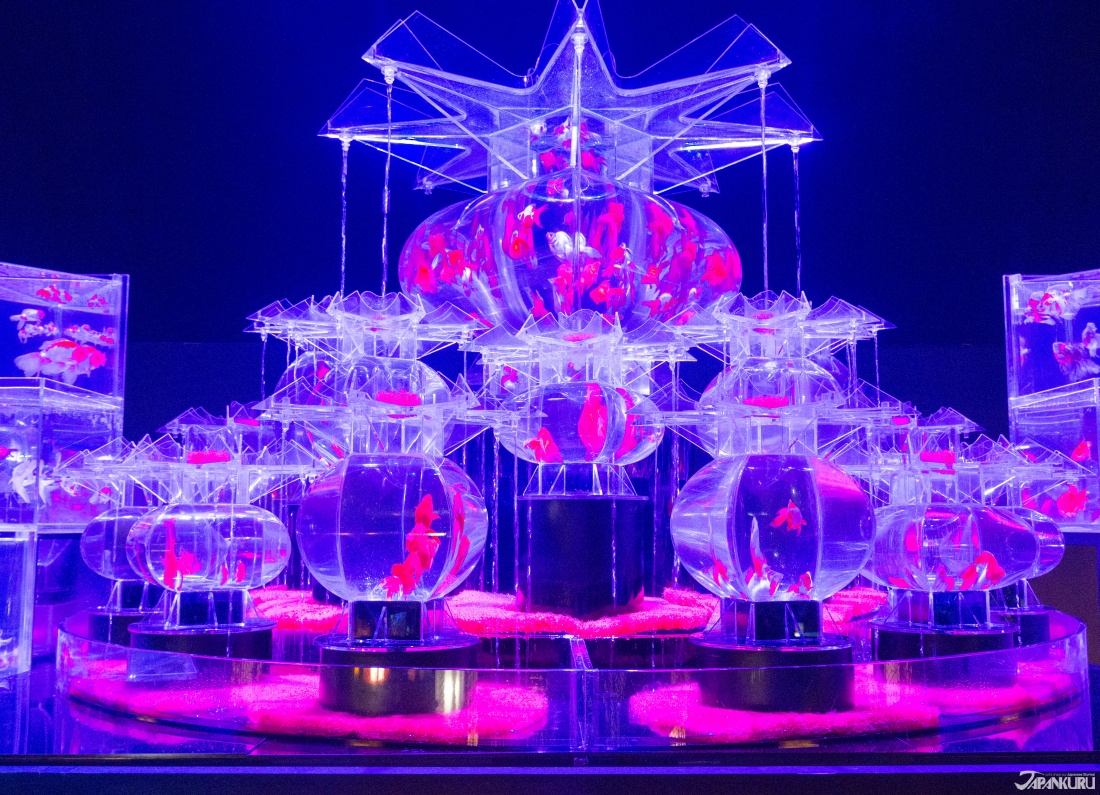 Tokyo's Art Aquarium Museum is a little hard to pin down, as it's part art exhibit, part goldfish-centric aquarium, and part photoshoot zone, too. Created by Tokyo artist Hidetomo Kimura, this museum started as a traveling exhibit, with enormous art piece fish tanks in fantastic shapes inspired by Japanese design, ceilings or walls filled with fish, and unique Japanese goldfish specimens, all traveling throughout Japan as temporary installations. But in recent years Kimura's art has found a more permanent home, first in Nihonbashi and now here in Ginza, where the work and all its fishy residents can stay put for a while. The resulting Art Aquarium Museum, with tens of thousands of gleaming fish swimming before your eyes in dark rooms lit with glowing neon, is a space that feels like a sci-fi movie set - probably a nightclub in futuristic Tokyo. You'll certainly see some visitors there dressed to the nines to take pictures, too, so maybe some of those sci-fi movies got it right after all. Not a bad way to spend a morning in Tokyo!

In recent years, Western-style vegan, vegetarian, and "plant-based" foods and restaurants have all had their moments as trends among Japan's young and fashionable crowd, but it's actually chains inspired by the UN's Sustainable Development Goals that seem to be moving towards making the fads a little more permanent! Komeda is a coffee shop chain found nationwide in Japan, and their menus usually look a lot like the original Nagoya cafe that started the chain, with coffee, free toast for breakfast, and some sandwiches and pastries to nibble on. But their "Komeda Is □" shop, found on the east side of Ginza, is what they call a "plant-based kissa," or a plant-based cafe, and it's a great place to grab lunch in Ginza without breaking the bank. Each seat is equipped with a digital menu, offering up (mostly) vegetarian or vegan drinks and food, like a classic Japanese hamburger steak made with plant protein, their popular katsu sandwich made with soy meat, coffee with oat milk, and almond-based ice cream atop their desserts. Even the shop's interior screams "plant-based," thanks to the cool tree-like columns at the center of the room, and the vines trailing down from the ceiling above a range of retro seating. 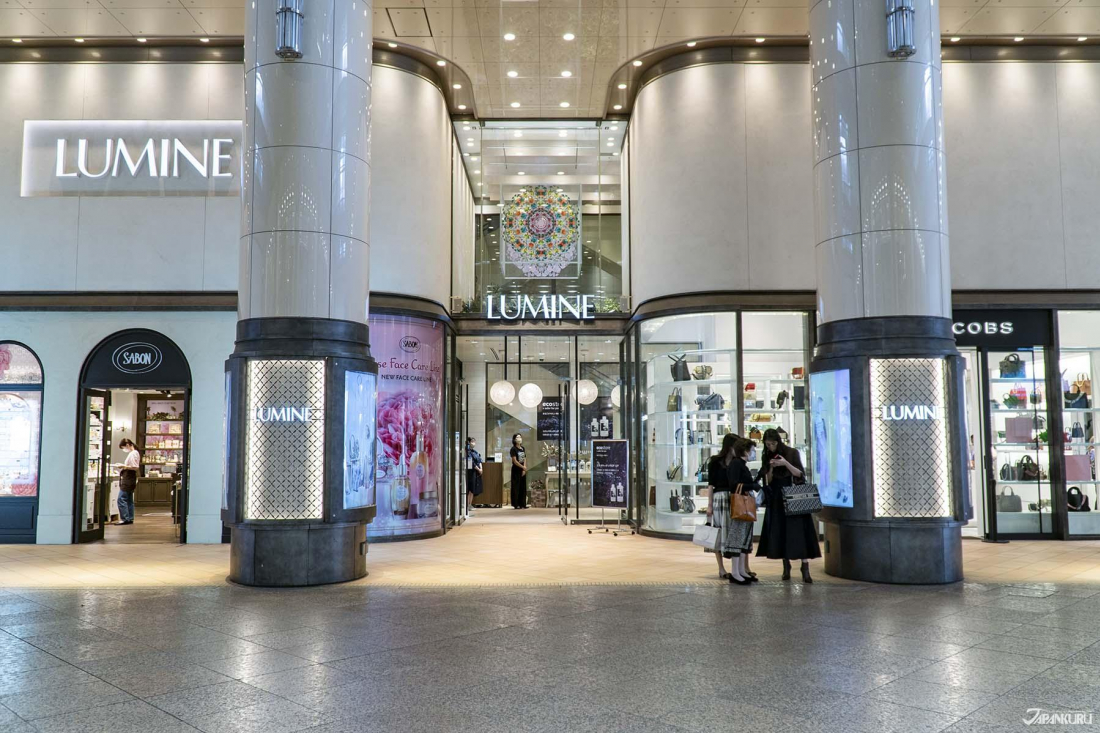 Broad streets lined with ritzy high-end labels, historic Japanese department stores, and tiny boutiques with astronomical prices... Ginza is synonymous with shopping. But the Ginza shopping experience actually doesn't have to blow the budget! There are some amazing Ginza stationery shops, a number of second-hand clothing stores that offer expensive Ginza styles at a fraction of the cost, some unexpected specialty shops, and regular shopping malls too. Lumine Yurakucho is on the border between Ginza and the neighboring area of Yurakucho, and it promises "the latest trends and fashions representative of Japan." Japanese shopping centers really do tend to be proactive about refreshing stock for each new season, changing up tenants once or twice a year, and even renewing their layouts with surprising frequency! These days, a trip to Lumine Yurakucho will give you a chance to check out popular Japanese brands like Gelato Pique (known for the fuzziest possible room wear), Cosme Kitchen (who specialize in natural and organic cosmetics), and Adam et Rope (a minimalist fashion brand that does men's and women's clothing). It's a great place to see what styles are big in Tokyo these days!

▷ Online shopping tip! Don't feel like carrying lots of heavy shopping bags around Tokyo? Or maybe you'd rather do your Tokyo shopping from the comfort of your own home, in your own country? Fortunately, the Lumine webshop has a broad selection that includes plenty of products from Gelato Pique, Cosme Kitchen, Adam et Rope, and much more. 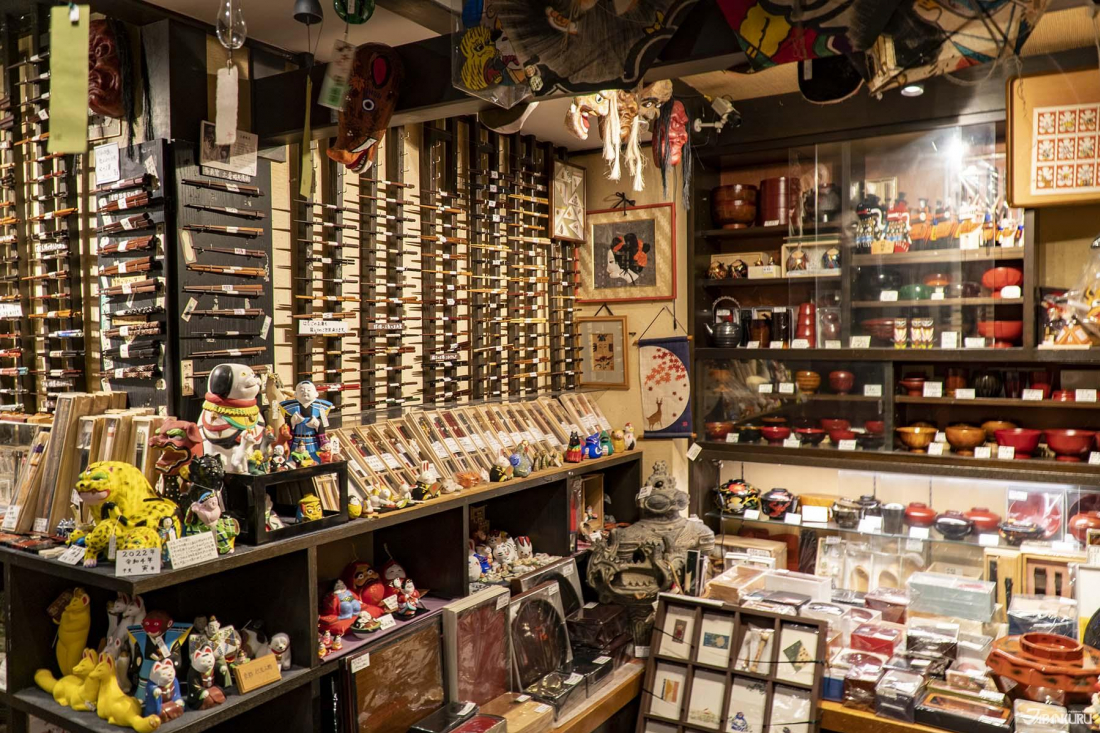 Hoping to pick up some nice souvenirs while you shop the day away in Ginza? A fancy pair of chopsticks makes a great memento of your time in Tokyo, since your beautiful Japanese chopsticks are bound to remind you of all the fresh sushi and mouth-watering ramen you ate in Japan. (Friends and family back home tend to love a practical and artfully crafted pair of Japanese chopsticks as a souvenir, too!) And when it comes to chopsticks in Ginza, Ginza Natsuno is the go-to destination, as one of the most well-stocked chopstick stores in Japan. Somewhere around 3,000 pairs of chopsticks line the walls, sit in stacks on shelves, are contained in tall cups, and are even tucked away in deep drawers - and they're all unique. Chopsticks come in different lengths, shapes, and materials, each style with its own merits, and it can be hard to find a favorite, although you can always ask the staff for advice on finding the perfect pair for you! It's not a bad idea to let them know your price range, too - chopsticks at Ginza Natsuno range from very reasonable prices around 1,000~2,000 yen, to extremely opulent price tags ranging into the tens of thousands. (One look at the beautiful high-priced chopsticks, though, and you'll probably want a pair for yourself!)

▷ Online shopping tip! It's fun to feel the chopsticks in your hand to try them out, but even if you can't make it to the shop in Ginza any time soon, you can still treat yourself to some fantastic chopsticks! The Ginza Natsuno webshop has a great selection, and even has a cool feature where you can choose your chopsticks by the region where they were manufactured! 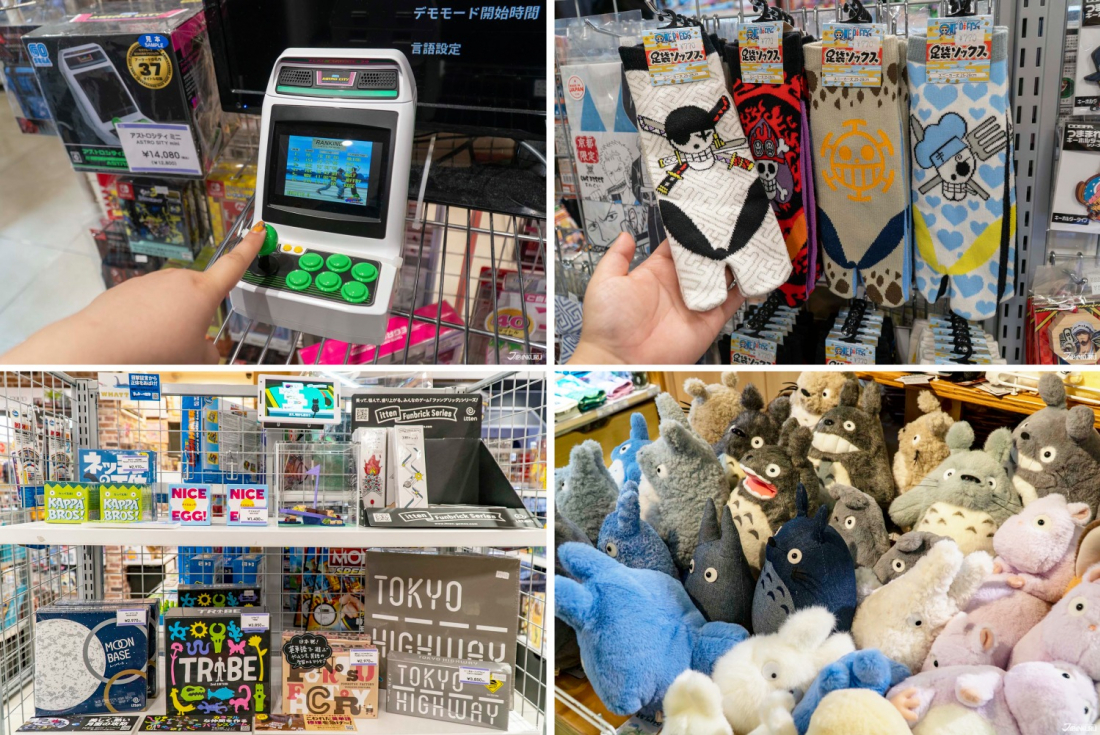 Whether you're a Pokemon fan at heart, a gamer, an anime and Studio Ghibli lover, or even a boardgame player, the Hakuhinkan Toy Park has multiple floors of toys and games, and a little something to cater to all kinds of hobbies. There are displays of remote-control dinosaurs, walls of Pokemon stuffies, an enormous slot car racetrack, plus all the little things that make great gifts for friends... or yourself. Pick up new games for consoles and for card tables, or cool merchandise from this year's most popular anime series... then play some tiny arcade games just for fun! It might not seem like a very "Ginza" shopping experience, but whether you plan to walk out weighed down with shopping bags, or you just want to look around, there's always something fun to do or see at Hakuhinkan Toy Park!

▷ Online shopping tip! Hakuhinkan Toy Park has an online presence, too! Check out the Hakuhinkan Online Shop to get some of their many toys and games delivered right to your doorstep, which might be for the best if you've been eyeing one of their giant Totoro cushions! 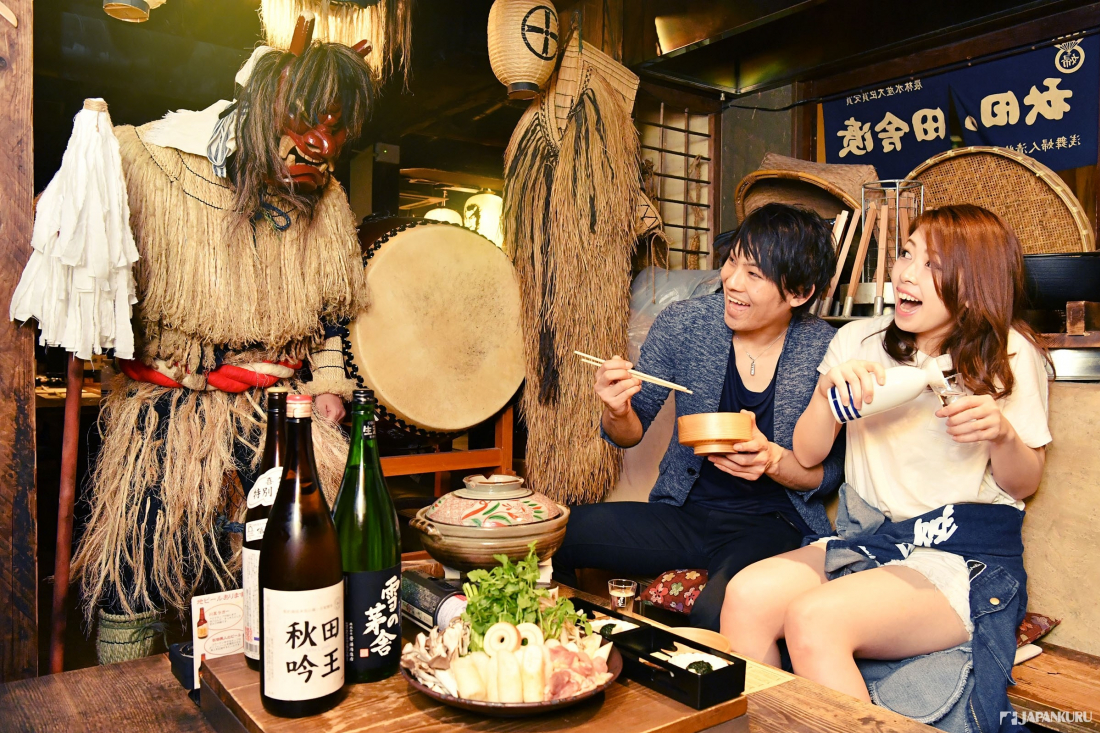 You might have heard of the Harajuku Kawaii Monster Cafe, but there's a much more traditional monster waiting to join you for dinner on your next visit to Ginza! Namahage Akita Dining is a restaurant focused on Akita cuisine, from the northern reaches of Japan's Tohoku region, and a dinnertime visit promises a meal full of kiritanpo rice cakes added to boiling pots of broth, flavorful Hinai-dori chicken, babahera ice cream, and a whole selection of sake brewed in Akita Prefecture. But when all these tasty northern recipes found their way south to Tokyo, they were followed by the fearsome "namahage," a demon-faced monster with a knack for scaring children, and a more recent penchant for taking photos with dinner guests. If you're lucky, you'll catch a glimpse of the namahage without ever having to visit Akita - or even leave the restaurant! 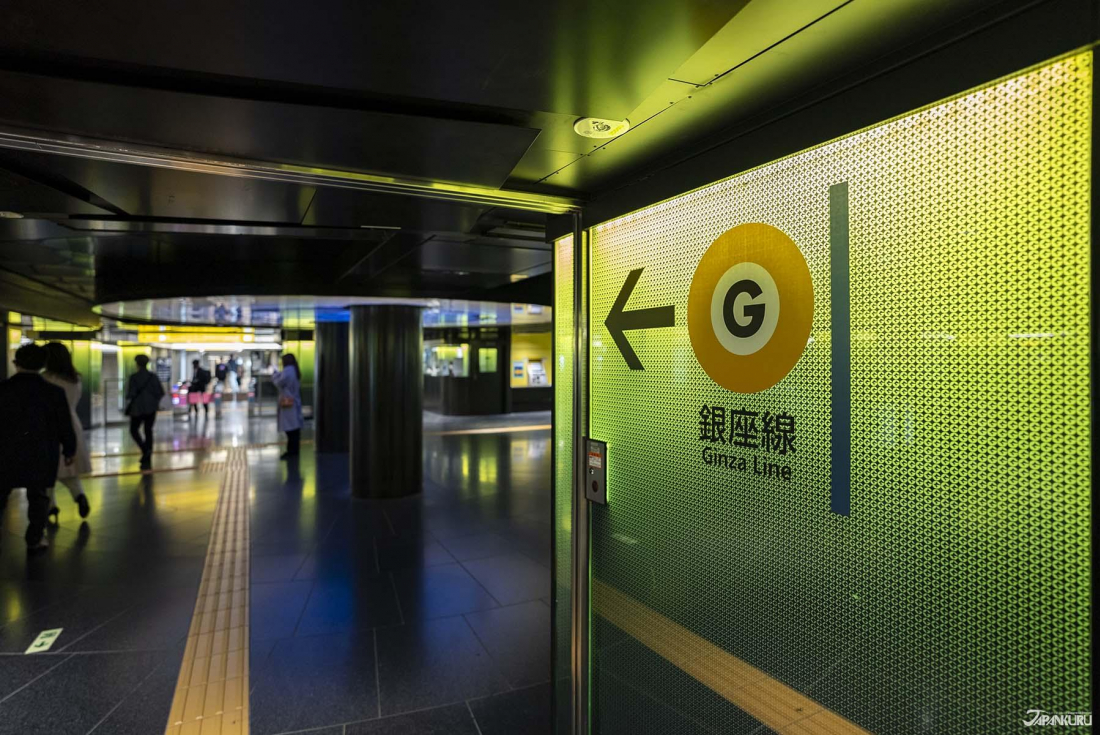 Whether you're looking for vegan treats or traditional Japanese meals, the latest Japanese fashion trends and video games or traditional handcrafted Japanese artisan goods, Ginza's contrasts are a big part of what make the area so appealing, like a distillation of the "old meets new" that is so often used to describe Japan. Sometimes those factors are even found in the same place, like the traditional Japanese design that helped inspire the futuristic fishtanks of the Art Aquarium Museum. So if you find yourself imagining Ginza as just a bunch of luxury shops, or even the domain of stuffy old ladies, then you'll want to check out some of the stops on this new guide to Ginza to set yourself straight!