Take a Stroll through Japan's Oldest Teahouses Filled with History 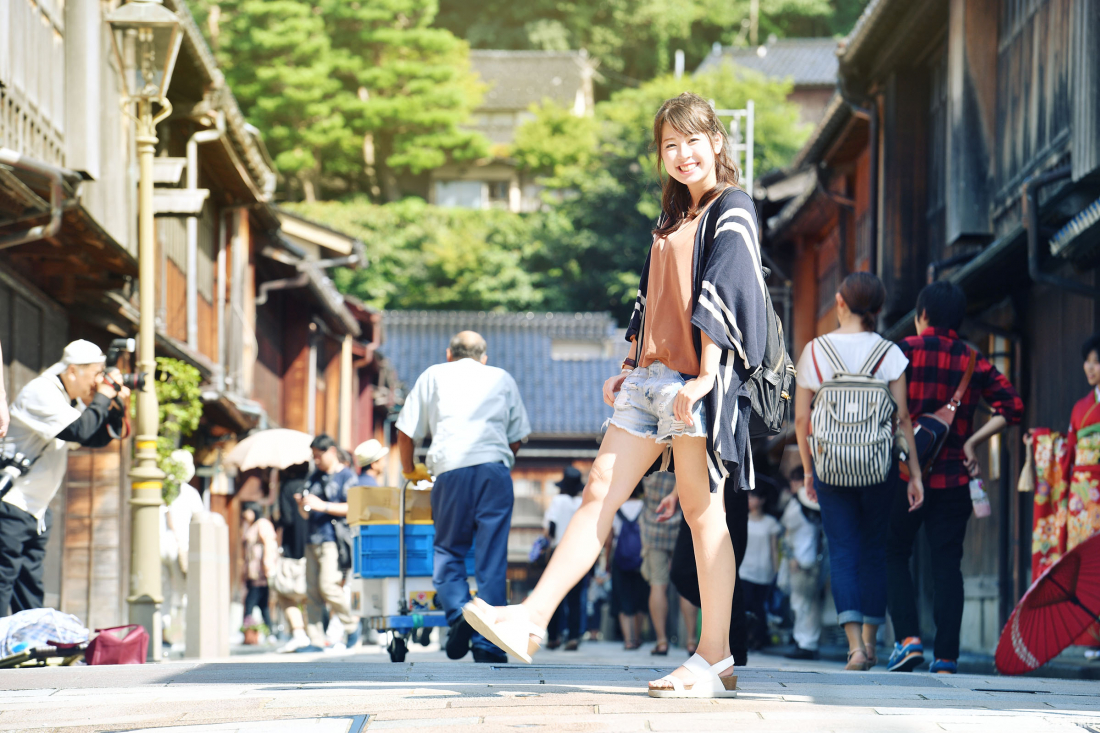 With the current popularity of Tokyo and Kyoto, first-time visitors to Japan often overlook Kanazawa when planning their trips—though locals and savvy visitors alike are well aware of the immense value in making a stop in Ishikawa Prefecture's capital city. Originally founded as a castle town by the Maeda-clan in the late 16th century, Kanazawa (which translates to "Marsh of Gold") has a plethora of well-known attractions one should be sure to check out when visiting. Among the more notable areas to visit are its well-preserved chaya districts, or "tea house streets" found near the downtown area and along the Asano river. These districts originated during the Edo-era, are incredibly well-preserved, and are highlighted by their sleek, wooden architectural designs and stone-paved streets. These unique areas—now labeled as Japanese cultural assets—mainly served as places of entertainment where locals would dine, drink, and take in geisha performances. It's important to note that these chaya districts are actually divided into three main areas: the largest and most popular, Higashi Chaya-gai (Eastern Tea House Street), Nishi Chaya-gai (Western Tea House Street), and Kazue-machi Chaya (named after a Kaga region samurai clan).

Higashi Chaya-gai is the largest, and most popular of the chaya districts in Kanazawa, exhibiting a well preserved, Edo-era feel for which the area is famous. These districts are typically lined by two-story buildings utilizing a red, wooden lattice design (known as "kimusuko" in Japanese), which generally are found lining the building's first-floor exterior where guests would dine and be entertained, while traditional, more private guest rooms are located on the second floor. Given their close proximity to the streets and a desire for privacy, discretion was baked into the exterior lattice design, which afforded guests a view of the outside while simultaneously blocking outsiders from peeking in. Though one can find this design throughout other nearby cities such as Kyoto, the displays on offer throughout Kanazawa's chaya districts are prime examples of the style, and are not to be missed!
Among the most famous of Higashi Chaya's tea houses are the Kaikaro Geisha Teahouse, which still functions as a fully operational geisha house today (and is the largest of its kind in Kanazawa), and the Ochaya Shima Geisha Teahouse, now a nationally designated Important Cultural Asset of Japan. Both tea houses are open to the public during daytime hours for visitors to explore these traditional spaces and learn how geisha entertain their guests through the use of music, poetry, singing, and drinking games. Both are inaccessible at night, however, given Ochaya Shima Geisha Teahouse now primarily functions as a museum, and Kaikaro Geisha Teahouse entertains wealthy clientele during the evening on an invitation-only basis. Should you wish you to have an authentic experience though, Kaikoro does provide special plans where visitors can experience a traditional meal accompanied by geisha performances, though they do not offer the full range of entertainment options typically offered to patrons. Please refer to their website here for more details, though be aware all information is listed in Japanese. 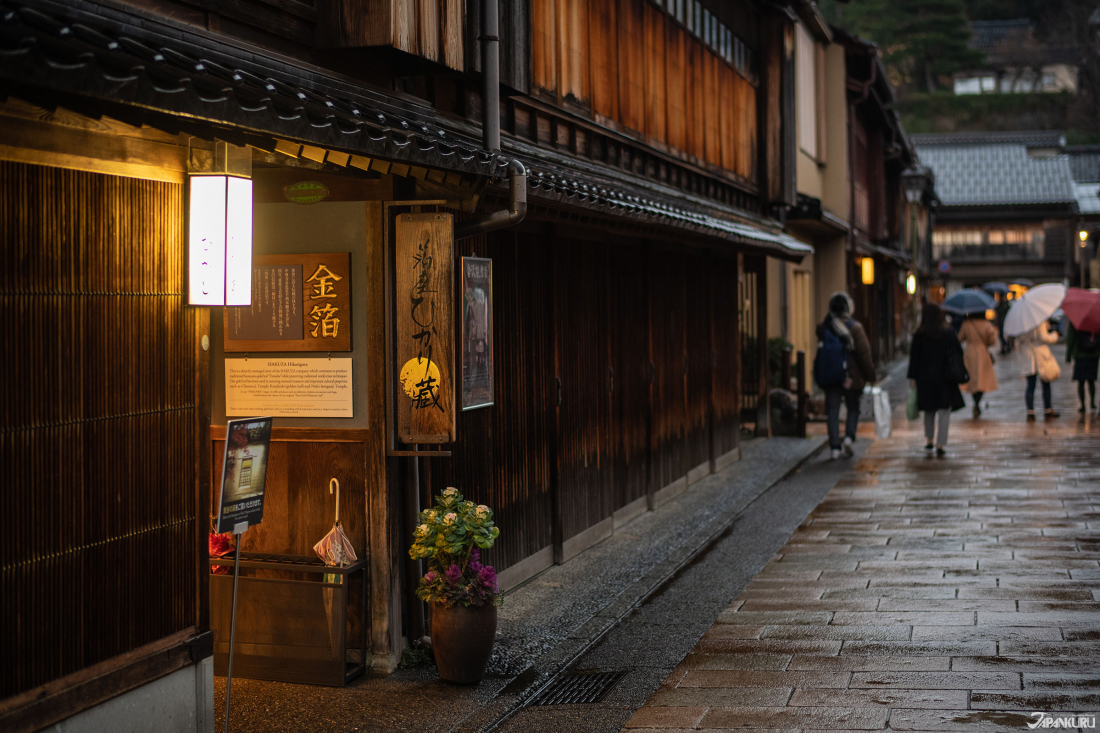 The "Marsh of Gold": Japan's Supplier of Gold Leaf Foil and the "Golden Warehouse"

Kanazawa's translated namesake as the "Marsh of gold" is an apt description, considering 99% of Japan's "gold leaf foil" originates from the area. To see some of the best examples of products on display making use of the famed gold leaf, we stopped by Hakuza in Higashi Chaya (also known as the "Golden Warehouse") to see some of the incredible golden craftsmanship on offer, which includes a tea room modeled after an original used by Toyotomi Hideyoshi—a 16th-century feudal warlord known for unifying Japan. The building itself incorporates gold leaf foil throughout its design, as you will find some of the building's outer and inner walls completely covered in this extremely thin, yet mesmerizingly beautiful material. Entry to the building is free for all to view, which also incorporates a shop selling a wide range of gold leaf foil products such as lacquerware, foods, cosmetics, and other miscellaneous goods. 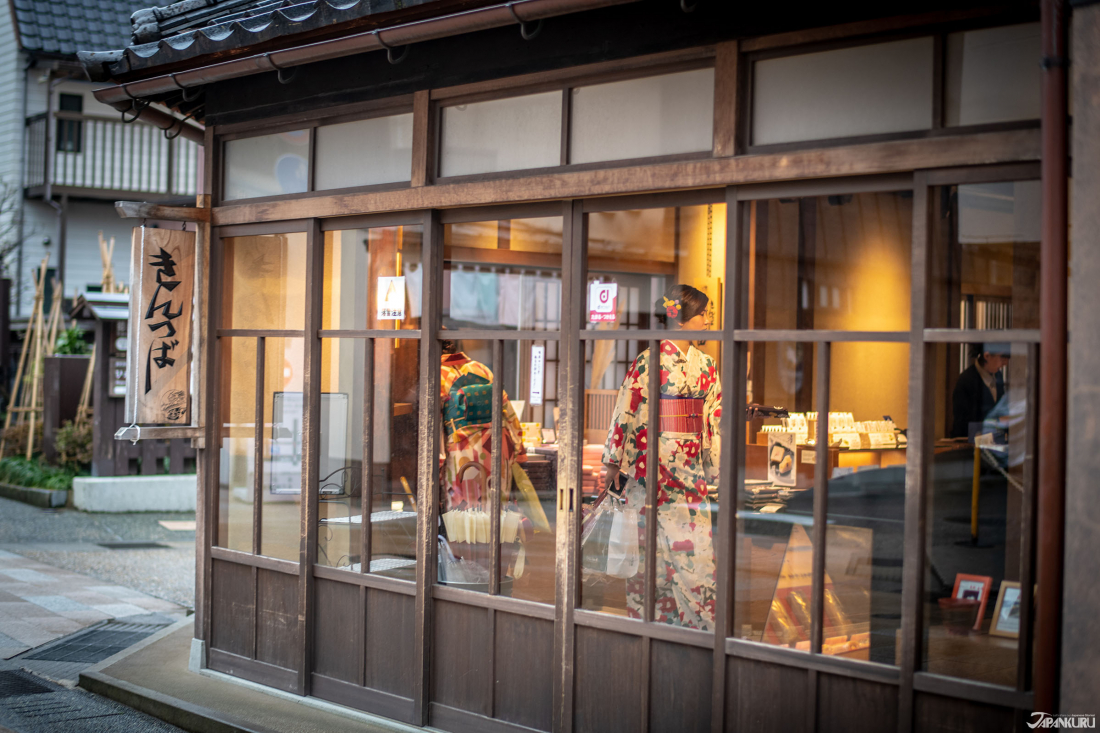 While strolling through the chaya streets of today you'll find the two-story buildings are no longer solely operating as geisha tea houses entertaining private guests, but have been converted to shops selling a wide range of products and services like fresh foods and fruits, confectionaries, coffee, cosmetics, kimono rentals, and much more! Outside of the ever-present opportunities to purchase a delicious snack, sweet, or keepsake—no matter the season or weather—while strolling through this quaint district one is transported back in time and afforded a glimpse of the daily life of past generations dating back to the Edo-era. We hope you'll find it as enjoyable as we do, and be sure to drop by next time you are in Kanazawa!