[Just what is Joban-mono fish?] Pt. 2 All About Fukushima's Southern Coastal City of Iwaki

[Just what is Joban-mono fish?] Pt. 2 All About Fukushima's Southern Coastal City of Iwaki

One of Fukushima's three regions, the coastal “Hama-dori” area has plenty of charms, one of them being the southern city of Iwaki!
The City of Iwaki (いわき市) - Fukushima's Largest Population & Area
Out of the many cities in the six prefectures that make up Japan's northern Tohoku region (Aomori, Akita, Iwate, Miyagi, Yamagata, and Fukushima), Iwaki has the second-largest population (338,045 people in 1,232km²), and it's the biggest city in Fukushima Prefecture. Iwaki has especially long hours of sunshine, and the mild climate means that summer and winter temperature changes are gentle and fairly minor. So when the weather starts to warm every summer, the beaches at Nakoso (勿来), Yotsukura (四倉), Usuiso (薄磯), and other spots along Iwaki's shore become beachside destinations for tourists from Tokyo, with everyone looking to cool down in the water. But it's not just sun and sand―let's take a peek at this major city in Fukushima, and all the things that make it special.
The Source of “Joban-mono”- Tasting the Blessings of the Sea at Their Best
Facing out towards the Pacific, the sea off the coast of Iwaki has the great fortune of being the spot where the warm Kuroshio Current and the cold Oyashio Current mix, bringing together the many varieties of fish looping north on the Kuroshio Current and rich blooms of plankton from the Oyashio Current. This meeting point gives the fish a place to feed on the plentiful plankton and breed in great numbers, making it an ideal fishing spot for plentiful catches of fresh Pacific saury, monkfish, greeneye, sea urchin, and skipjack tuna/bonito. The seafood that is the product of this bountiful harvest is called the "Joban-mono" (常磐もの) of Fukushima, and the abundant variety and freshness are highly prized.

Above all, skipjack tuna or bonito, called "katsuo" (カツオ) in Japanese, is especially beloved by the citizens of Iwaki, who have made it a big part of the local diet since long ago. Fresh katsuo sashimi is a must-have at any celebratory feast, and on top the common Japanese dishes of raw katsuo sashimi and "katsuo tataki" seared over a straw fire, families in Iwaki will often make katsuo "yakibitashi" (焼びたし), a local dish of sauteed katsuo topped with ginger soy sauce.

Travelers can get a taste of the abundant variety of seafood and flavors produced by Iwaki at local fish markets like Iwaki Lalamew and restaurants throughout the city.
Hot Springs & Hula - Home to Japan's First Resort
The most popular onsen (温泉, hot spring) in the Hama-dori coastal area of Fukushima is found in Iwaki, and Iwaki Yumoto Onsen (いわき湯本温泉), as it's called, has a history stretching back 1600 years. In fact, Iwaki Yumoto Onsen is famous for being counted among the three oldest hot spring destinations in Japan, alongside Dogo Onsen (道後温泉) in Ehime and Arima Onsen (有馬温泉) in Hyogo. Every minute the spring produces five tons of hot water, said to have medicinal effects, and the spring is known as a "bijin no yu" (美人の湯, beautifying water) thanks to the beautifying effects it has on the skin.

In the more recent year of 1966, Japan's first ever spa resort/theme park Spa Resort Hawaiians opened at Iwaki Yumoto Onsen, taking advantage of the bounty of hot spring water. Guests can still visit and enjoy pools and other attractions inside the resort buildings which are all set to a temperature of 28°C (82°F) throughout the entire year, in addition to what is perhaps the largest outdoor onsen bath in Japan, called "Edo-Jowa Yoichi," and entertainment showcasing hula and fire knife dancers. The resort is also well known in Japan thanks to the 2006 Japanese movie Hula Girls, based on a true story, which is all about hula dancers in small town Japan, and features a fictional version of Spa Resort Hawaiians on film.

One thing that pops up again and again in the history of Iwaki is coal mines. In the little Iwaki neighborhood of Mirokusawa (弥勒沢), coal was discovered back in 1856, and in the following years the whole area was subsequently called the Joban Tanden (常磐炭田), or Joban coalfields. For the next century, the Joban Tanden coal industry greatly contributed to Japan's economic development, before the mine eventually closed for good, and changes like the opening of Spa Resort Hawaiians helped the local tourism industry take over. With the coal miners at work excavating the mountain, not only did the people of Iwaki find coal, but they also found the fossils of dinosaurs and more. These days there are still plenty of landmarks and facilities connected to the area's history of coal mines and fossils, like the remains of of Uchigoyama Shrine and Sumo Ring (内郷山神社跡・相撲場跡), Mirokusawa Coal Mine Museum (みろく沢炭鉱資料館), and Iwaki City Coal & Fossil Museum Horuru (いわき市石炭・化石館ほるる).
Where the Seaside Meets Mountain Villages
The city of Iwaki, overlooking the wide open scenery of the Pacific Ocean, isn't only a place of beautiful sea views―there are gorgeous cherry blossom viewing spots, places to enjoy the changing colors of autumn leaves, and more, in every direction. When it comes to famous spots on the water, Shioyazaki Lighthouse (塩屋崎灯台) was chosen as one of Japan's 50 best lighthouses, Benten Island and the Shunuri (Vermillion-Painted) Bridge (弁天島と朱塗りの橋) jut out into the sea as iconic symbols of the Hattachi Coast, and the Shiomidai observation deck (潮見台) offers a thrilling look straight down into the water. On land there's the beautiful Natsuigawa Ravine (夏井川渓谷), Sedogaro (背戸峨廊) with its gorgeous views of waterfalls weaving around eyecatching rock formations, and Ryujin Gorge (龍神峡), a spot famous for gorgeous fall foliage.

Of course, Iwaki is scattered with famous spots for sakura (桜, cherry blossoms) as well! Ogawasuwa Shrine's (小川諏訪神社) 500-year-old weeping cherry tree is not to be missed, Matsugaoka Park (松ヶ岡公園) and its broad landscape of Yoshino cherry trees is a sight to be seen, Nakoso Park (勿来関公園) boasts a whopping 600 trees all blooming with sakura, and the Shinden Oyamazakura (新田大山桜) is a famous cherry tree that quietly blooms with a riot of pink blossoms every year, nestled in the mountains. 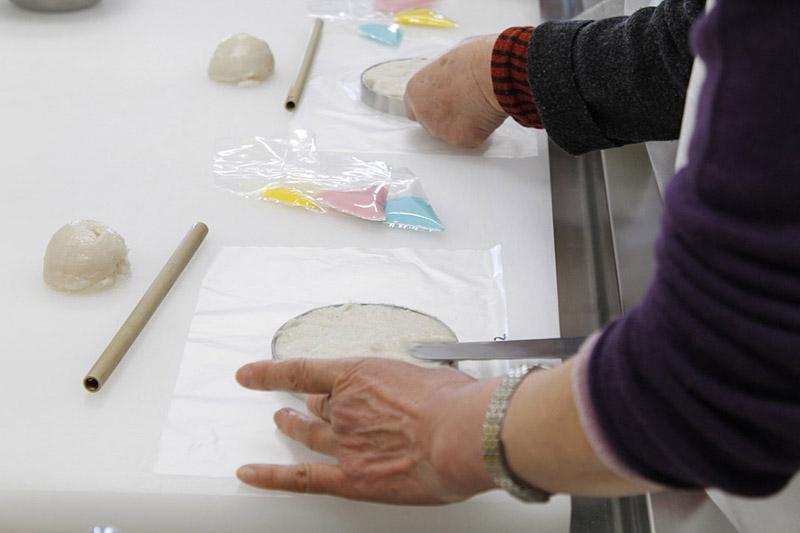 Activities and Experiences of All Kinds
In Iwaki, travelers can try their hands at picking local strawberries, blueberries, grapes, and even tomatoes, or instead excavate their own fossils at the Iwaki Ammonite Center, or Iwaki City Coal & Fossil Museum Horuru. For those who like to get creative, there are traditional factories that offer workshops for making original Sue ware pottery, or cooking up kamaboko fish cakes using fresh local fish. There are even hula dance classes taught by pro dancers! With space to stretch out and a variety of sightseeing resources, there's plenty to see and do in Iwaki.