A Must for Dog Lovers Visiting Japan! Odate, Akita - Hometown of the Loyal Hachiko

A Must for Dog Lovers Visiting Japan! Odate, Akita - Hometown of the Loyal Hachiko

From Taiwanese author Juntang Wang, a trip through Hachiko's birthplace and an Akita hotspot.

One of the joys of a trip to Japan is all the amazing animal-themed spots around the country, like rabbit islands, fox villages, cat cafes, deer parks, and the whole prefecture of Akita―home to the Akita breed of dogs, also called Akita-inu. For fans of the famously loyal dog Hachiko (sometimes just "Hachi"), the pup's hometown of Odate, Akita, where Hachiko lived before being given to Professor Ueno, is an obvious destination! While there's no Hachiko there now, Odate is committed to preserving the history and ancestry of this extremely old dog breed, which comes from Odate itself.

In fact, Akita Prefecture is so dedicated to their famous dog breed, they've even drawn up illustrations of the prefecture itself as an Akita-inu for promotional materials. Whether north-side-up or flipped upside-down, the image totally fits. We have to give them credit for that creativity!
As soon as I got off the train and set foot in Odate Station, I knew I'd arrived thanks to images of Akita-inu in every direction! This is where Hachiko left Akita as a young puppy and traveled south to meet his beloved owner, Professor Ueno, so there's even a "Hachiko Shrine" on the platform inside the station!
The offering box in front of the little shrine is pretty unique, too. Not only is the box itself made using local Odate bentwood technique, when I put money in, I heard a little "woof woof."
There is also another Hachiko statue in the station, plus Hachiko-themed and general Akita-inu-themed souvenirs and snacks galore! Just getting out of the station took a while...and outside there's another statue, similar to the one in front of Shibuya Station. The statues are really everywhere.
Among the popular Akita-inu souvenirs are "Akita noses" and "Akita poop," sold in stores all over town. (Thankfully, they're actually chocolate!)

The Stars of Odate Station

Odate isn't just the hometown of Hachiko, it's home to the entire breed of Akita dogs, so Odate Station has a couple of stationmasters who are a little bit furrier than you might expect. In fact, they're Akita-inu sistersーAsuka and Ako! The two "Sightseeing Stationmasters" spend much of their time greeting visitors with friendly smiles (and earning some well-deserved pets), outside of Odate Station.
You can really get to know the two stationmasters at their petting area―Asuka is quiet and a little shy, whereas Ako is a ball of energy! Human visitors are limited to five minutes with the dogs so they don't get overwhelmed with visitors, but it was definitely long enough to feel the joy of petting the fluffy Akita coats!
When I left Odate the next day, June 23rd, it was actually the sisters' birthday! Not only did a group of loyal fans gather for Asuka and Ako's birthday party, but local media came out to cover the event. Everyone lined up to take photos with the adorable birthday girls, and it was clear how beloved these Akita-inu are in Odate―fans of all ages cooed at the pups and squealed about how cute they were!
Don't forget to grab a dog-themed tourist map before leaving the station! You can visit the town's sightseeing destinations and search for Akita-inu at the same time. Next to the station is also an office where tourists can rent a bycicle for free, which makes getting around especially easy.
For Omachi Shopping Street in central Odate, Nono the Akita-inu is an indispensable icon, and a part of promotional activities big and small.
There's even Akita-Inu Mochi, made from local rice and stamped with adorable pups.

The only Akita-inu-themed museum in Japan, this place is inhabited by a host of cute pups from April to late November. If you're lucky, you can spend the day with these big, fluffy Akita-inu.
The picture above is Fuko, the most popular dog at the museum! But Fuko's not the only Akita-inu visitors can play with. The dark brown Kurobe, Modoka and Gin-chan with their deep red coats, and black-and-white Yuki-chan are all equally adorable and ready to hang out.
On the first floor, you can see all the dogs at work! And when the museum staff there found out I had come from Taiwan, they kindly gave me a folder with an Akita-inu design on it as a souvenir. The upper floors have exhibits on the history of the Akita breed, and all kinds of information about the dogs, including their unique characteristics. If you tend to get Akita-inu and Shiba-inu mixed up (they do look similar), the museum will help you distinguish the two breeds―for one, Akita-inu can have an official coat color that you don't see on Shiba-inu! (It's brindle, which they call "tiger-striped," 虎斑色!)
・Akita-inu & Shiba-inu: Identification for Dummies・

First, the Akita breed is big, and Shibas are small. Digging a little deeper, you'll often hear that Shiba-inu have faces with clever-looking features, whereas Akita-inu look... dumb. (Hey, that's not fair!)
In fact, far from being stupid, in the past Akita-inu ownership was restricted only to Japan's royal or noble families, and you could tell just how high-status each dog (and the family) was by looking at the dog leash being used. With such an illustrious history, Akita-inu are regarded as the ideal dog by many in Japan, and some say they're strong enough to hunt bears!

For dog lovers, and anyone who's fallen in love with Akita-inu after arriving in Akita Prefecture, it's definitely worth looking around the museum to learn more about the dogs (and see a lot of cute stuff)!
・Akita-inu Trivia・

① The Akita-inu is the only large dog among the breeds native to Japan, and it has been named Japan's national dog.
② In the past, Akita-inu were used as guard dogs, but only for nobility.
③ The first person to bring an Akita breed dog to the United States was the famous Helen Keller.
④ Akita-inu are full of energy and frequently get themselves into trouble. I've heard that there are home insurers in the US that will raise your premium (or even refuse to cover you) if you adopt an Akita-inu.
⑤ If you send someone a picture or figure of an Akita-inu in Japan, the implied message is "get well soon"!

Loyalty is Passed Down Through the Generations

Although the famed Hachiko spent most of his life in Tokyo, he was born on a farm just outside of Odate, Akita. He was a true, authentic Akita! Hachiko left his hometown to go life with Professor Ueno in Tokyo when he was about 50 days old. But Hachiko isn't the only Akita-inu famous for his loyalty―it's clearly a trait shared throughout the breed. In the Kuzowara area of Odate I heard about the much-beloved "Shiro."
During the Keicho era of Japan (1596~1615), a famous hunter called Sadaroku had a dog named Shiro, his reliable hunting partner. Sadaroku had a special hunting license that allowed him to hunt on private land, but when he was surrounded one day after an unsuccessful hunt, he realized that he'd forgotten to bring his license with him, and was subsequently arrested. Sadaroku told Shiro to fetch the license for him so he could be freed, and Shiro understood, tirelessly running straight back home. But Sadaroku's wife didn't understand what the dog was asking for, and it took another trip back and forth for Shiro to finally get the license and bring it back to Sadaroku. By that point it was too lateーSadaroku had been executed, and Shiro died from exhaustion. It's said that the howling spirit of Shiro the Akita-inu continued to haunt the area for centuries, causing natural disasters and unexpected injuries, until locals finally built Roken Shrine (老犬神社) (literally the "Old Dog Shrine") in honor of Shiro's loyalty.
I heard that a copy of Sadaroku's hunting permit is still kept in the shrine, so I really wanted to visit, but when I went to plan my trip I realized that the shrine is actually in a very remote location in the mountains. It's hard to get to, even by car. It just wasn't in the cards for this trip to Odate. 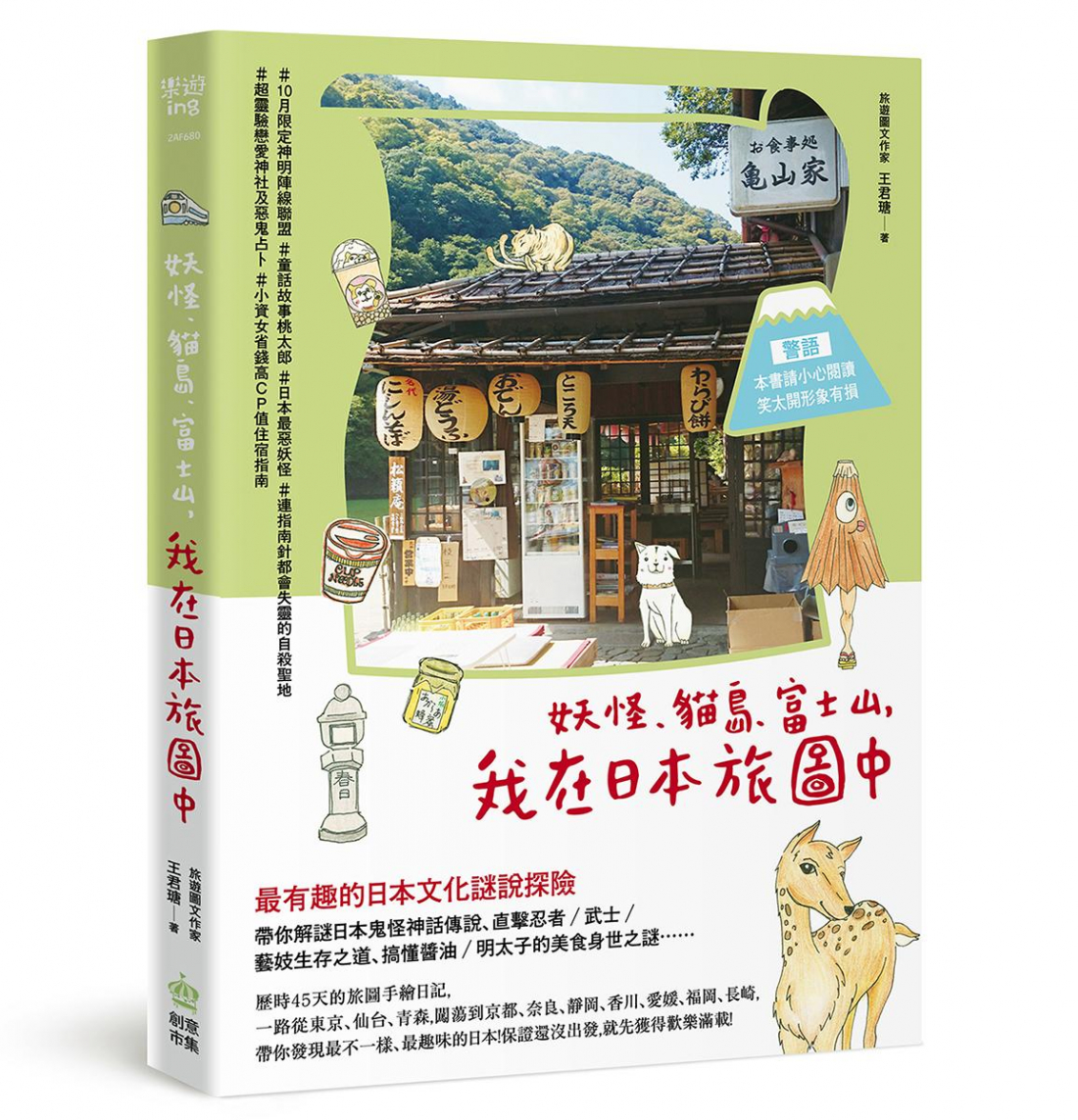 The contents of this article are from the book "Yokai, Cat Island, Mount Fuji, A Map of My Travels in Japan" (妖怪、貓島、富士山，我在日本旅圖中) by Juntang Wang, originally published in Chinese by Inno-Fair. The book isn't available in English, but if you enjoyed the illustrations, you'll find purchase links below. All of the details described above are from the author's travels in 2018, and may not be entirely up-to-date. Please check for the latest official information before making any plans!

All about the books we love, here at Japankuru!