This giant Japanese yakisoba from Peyang is definitely for more than one person. Probably. Maybe.
This isn't the first time Peyang's instant noodle products have become a hot topic on the internet. Instant noodles are a big thing in Japan (there's even a museum), and it was only a matter of weeks ago that Japankuru editor Pin discussed her experiences with Peyang's (in)famous apple pie yakisoba. But Peyang is known for making instant noodles that are both unique ideas, but also uniquely appetizing, and so again, today, we are intrigued. 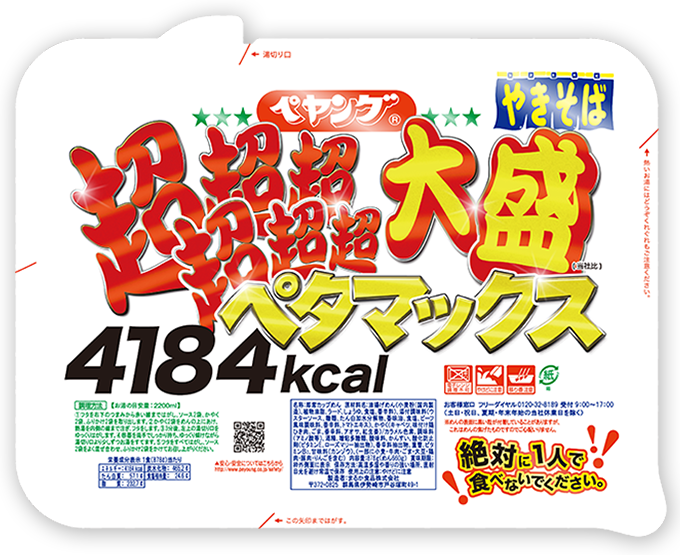 Which is why, on all of the packaging and in just about every instance of promotional copy, Peyang adds "definitely do not eat this alone" (絶対に1人で食べないでください). Considering an average adult eats somewhere around 2,000 calories a day, it makes sense that they absolutely are not recommending this as a weekday lunch or a snack after school.

English speakers might notice that the official English-language packaging, on the other hand, almost seems to promise that you never have to eat this yakisoba alone. I expect somebody to come help me finish the noodles, Peyang, so I hope you're sending someone now.

Aside from the enormous portion size, there doesn't seem to be much else to set this yakisoba apart from all others. It would appear that Peyang is simply taking their standard yakisoba and scaling it up. But if you are hungry enough to eat two people's breakfast, lunch, and dinner, all at once, this new yakisoba might just be calling your name.