Brunch spots and bars, trendy design-focused gift shops and outdoor terrace seating, all along the canal. 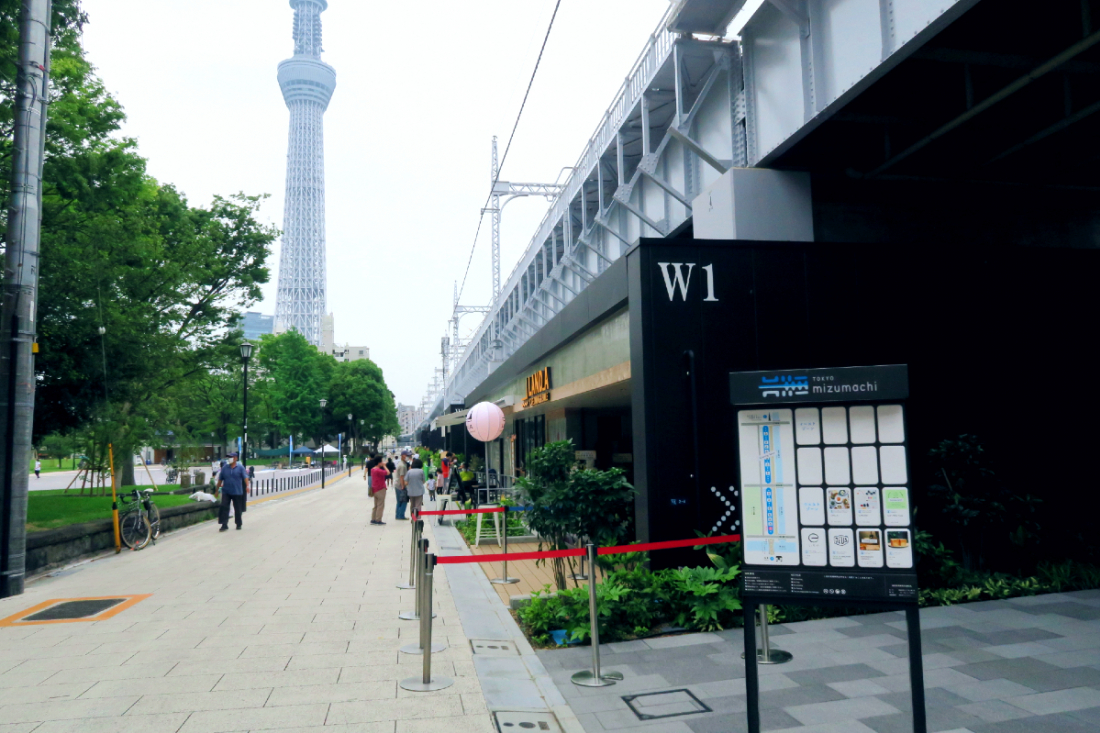 Tokyo Mizumachi is a brand new shopping and leisure facility, stretching between the edge of Asakusa, across the Sumida River, and all the way over to Tokyo Skytree. This makes it sound pretty huge, but the distance between Asakusa and Skytree might surprise travelers - the two are only separated by a few minutes walk! With Tokyo Mizumachi set to provide a scenic path over the river and along the canal that runs between the two destinations, dotted with shopping and good food as well, a day walking between Asakusa and Tokyo Skytree will almost certainly soon become a Tokyo sightseeing staple.

Originally slated to open for business in mid-May 2020, it was no shock that Tokyo Mizumachi's grand opening was pushed back a month or so. But on June 18th the new facility successfully had what you might call a gradual grand opening, similar to the opening of Harajuku shopping mall With Harajuku (where we visited a new Uniqlo and Ikea earlier this month). The whole east half of Tokyo Mizumachi is still under construction, and another half of the shops in the west portion is still getting ready to open. So the Japankuru team headed over on Tokyo Mizumachi's first day of business to check out four shops and restaurants, plus the scenic surroundings they've created along the canal and Sumida Park.

Also, being tsuyu, it rained. But what are you going to do?

The facility is split up into the East Zone (still under construction), the West Zone (4/7 businesses currently open), and the Sumida River Walk which runs over the water. 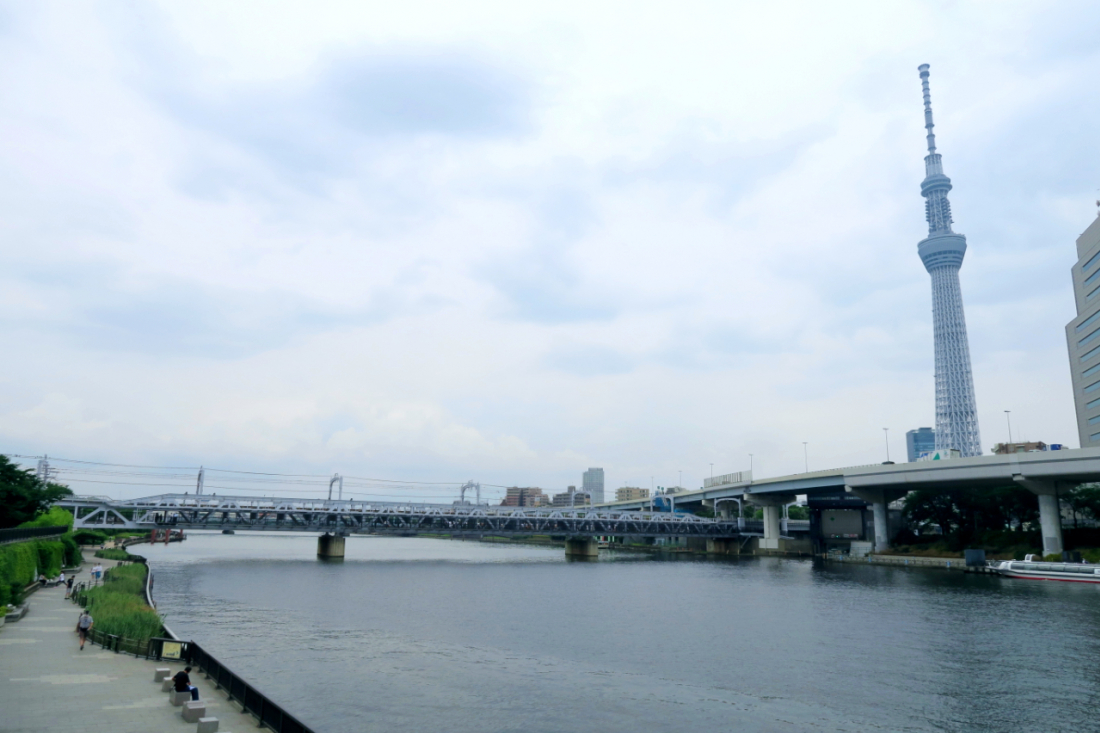 We started our outing at the Asakusa subway station, just a few minutes away from the Sumida River Walk on foot. Part of the thrill of the whole Tokyo Mizumachi facility is that it's all built directly under the Tobu Railway train tracks that run between Tokyo Skytree and Asakusa, and that includes this new bridge. While the Sumida River Walk doesn't house any shopping―in essence, it really is just a new bridge―it does provide easy access across the river, so pedestrians don't have to go out of their way to cross the water. The cloudy, rainy weather on the 18th meant the view was all a little drab, but the river area, crisscrossed with other bridges, will definitely be very picturesque when the sun is out. 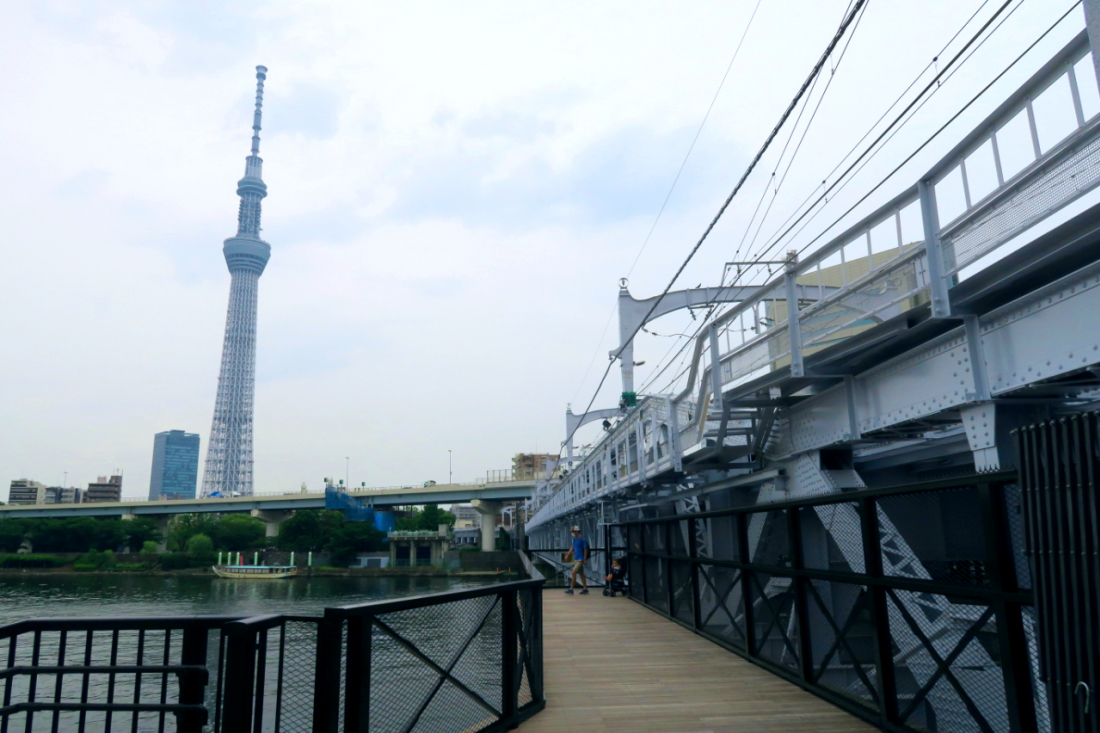 The Sumida River Walk has also been named a "Lover's Sanctuary" by a Japanese NPO of the same name, which finds romantic spots all over Japan and designates them as such. They say the bridge is a date destination, and who are we to argue? 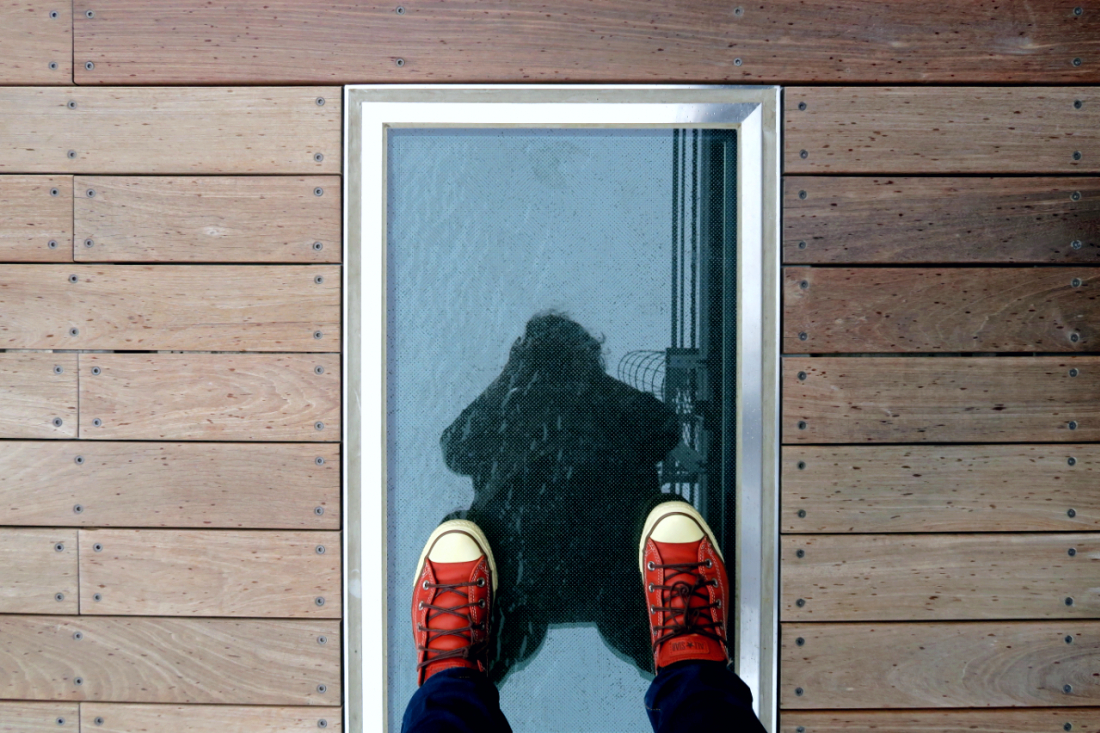 There is one spot along the bridge where you can look down at the river below, and as we were taking a picture we were ambushed by old ladies who were extremely charmed by the whole thing, commenting "oh, I thought it was just reflecting the sky, but you can actually see the river down there!" It's not nearly as high up as the similar floor window in Tokyo Skytree, but it's still a cool view. 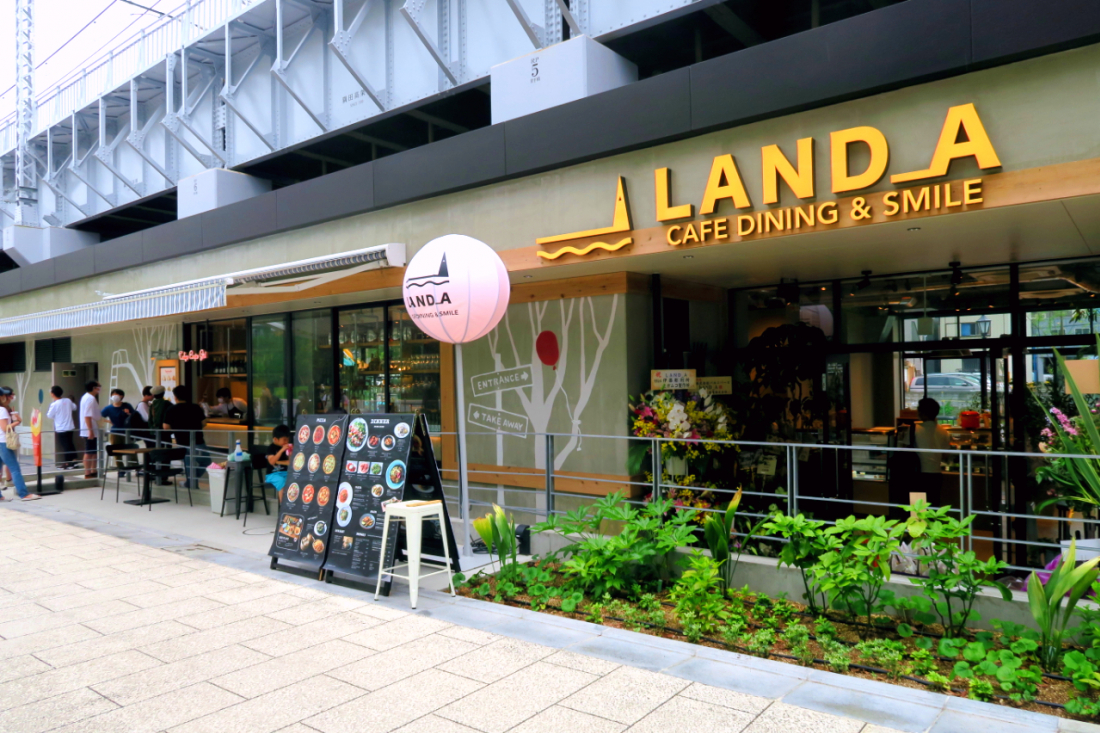 We stepped off the bridge, crossed the street, and saw a line of shops stretching in front of us―bordered by a canal on one side, and Sumida Park on the other. They're clearly hoping people will take a load off and spend a while in the area! Furthest west in the strip of businesses is Land_A, who apparently offer "cafe dining & smile." Inside, a handful of groups were sitting down to a late lunch, and outside a long line was forming at the Tokyo Crepe Girl counter attached to the restaurant. 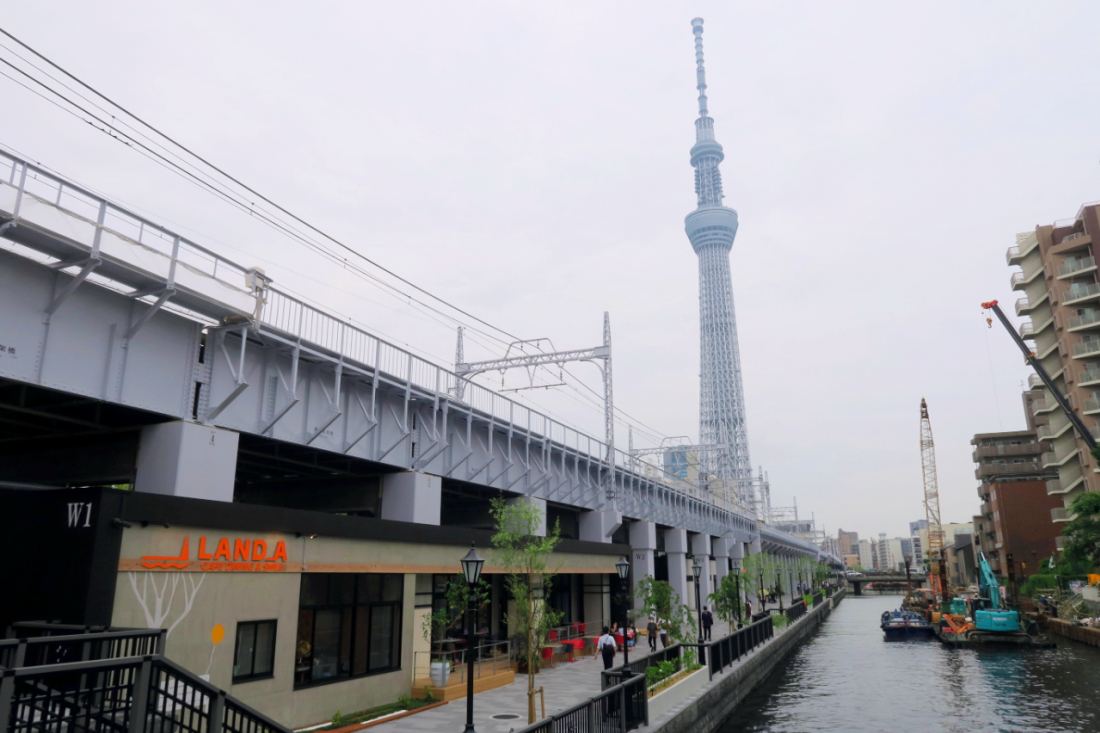 A wide path runs along the back of all the businesses, wedged in between outdoor seating areas and the Kitajukken Canal (also called the Kitajukken River). While we didn't spot any diners in Land_A's bright red canal-facing seats, there were a few people lounging at the chairs and tables of other eateries along the way! The rain probably scared most diners away from the al fresco spaces, but with Tokyo weather warming up and indoor spaces still a COVID-19 concern, the riverside seating will no-doubt grow in popularity. 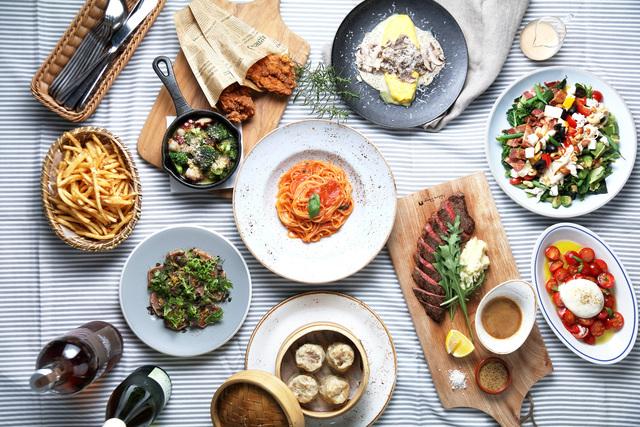 Land_A is self-described casual dining. There are obvious European influences, and they offer a menu heavy with Italian options. 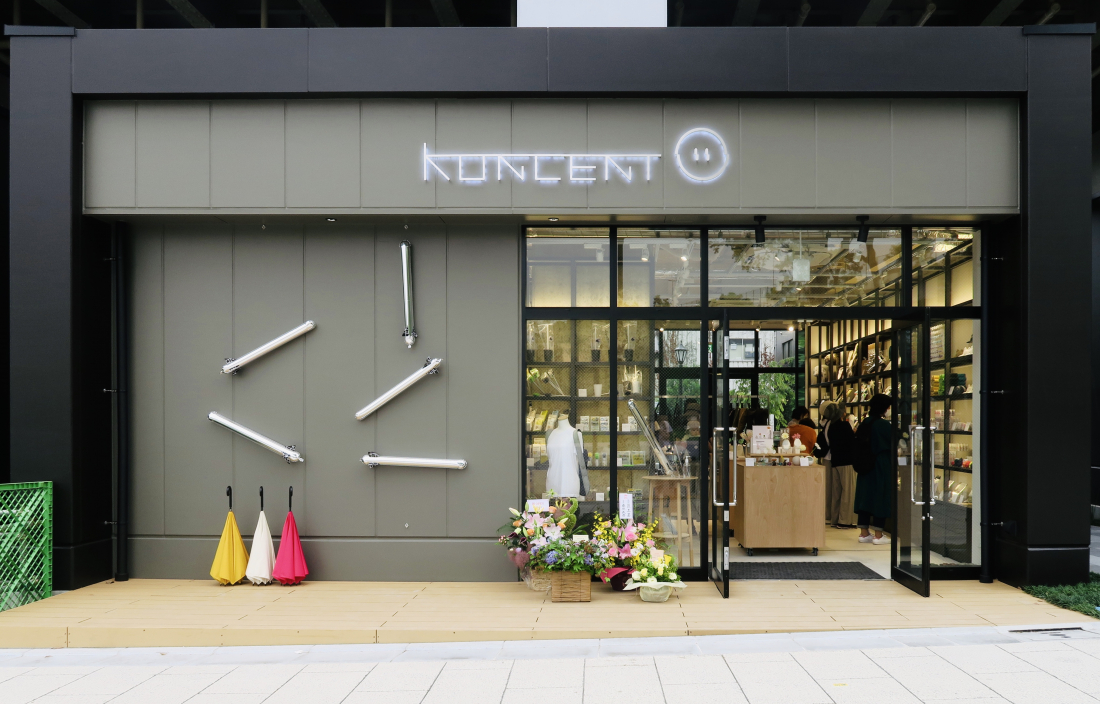 Next door is Koncent, what Japan would call a "zakka" store. Zakka (雑貨) refers to variety goods: housewares, kitchen goods, wearable accessories, stationery, perhaps a few toys, and generally novelty and gift items of all kinds. 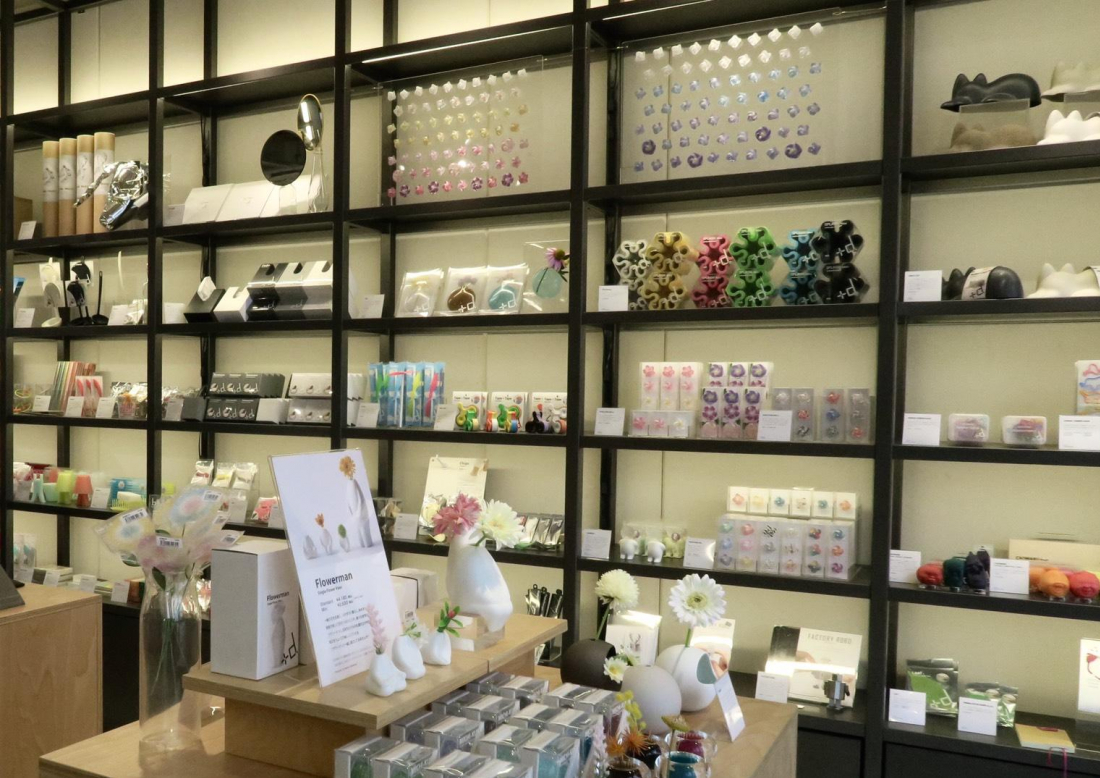 Koncent is clearly design-focused, offering many items so beautifully designed that they are hard to resist, even if you don't really need them. Prices vary, with plenty of small items for under 1,000 yen, and others for tens of thousands. If you want something cheap and functional, you're better off stopping by a hundred yen store, but it's not a bad place for an oh-so-charming gift or two. 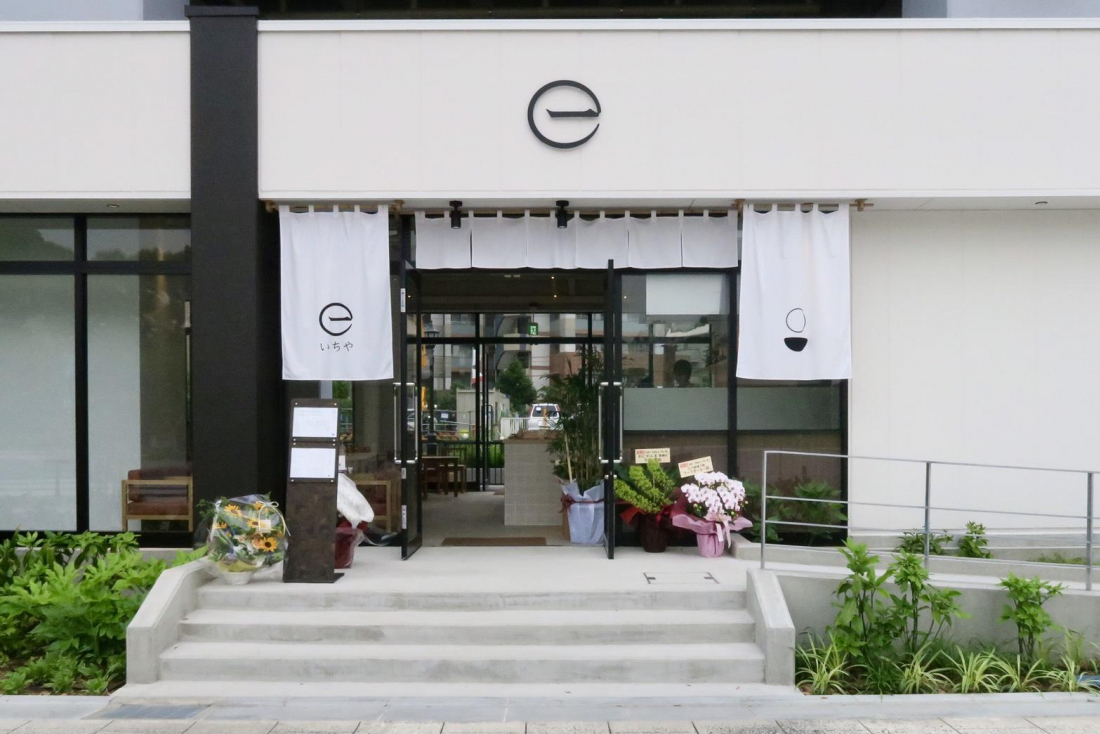 A little down the path is Ichiya, a wagashi (和菓子, Japanese sweets) shop with a little seating area and some small sweets and snacks available to-go. 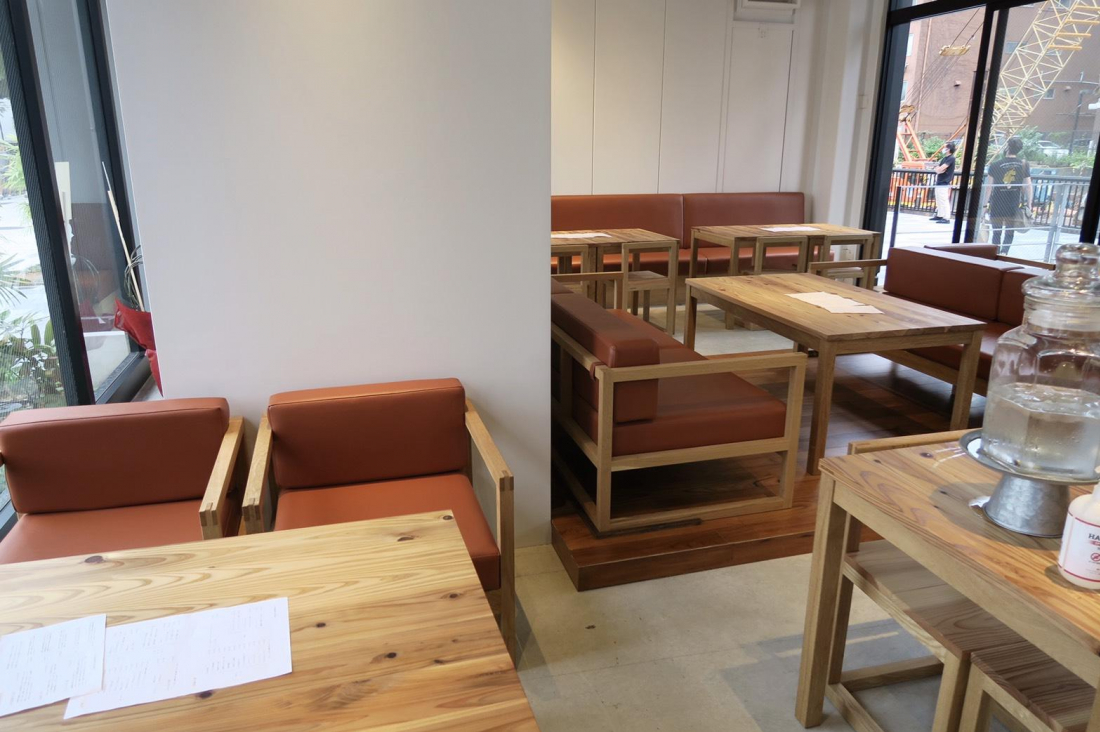 For a somewhat indulgent afternoon snack, one of the eat-in options at Ichiya might just be perfect. On the menu was a selection of parfaits and dessert creations, utilizing Japanese ingredients and flavors like red bean, matcha, and kuromitsu (黒蜜, brown sugar syrup). 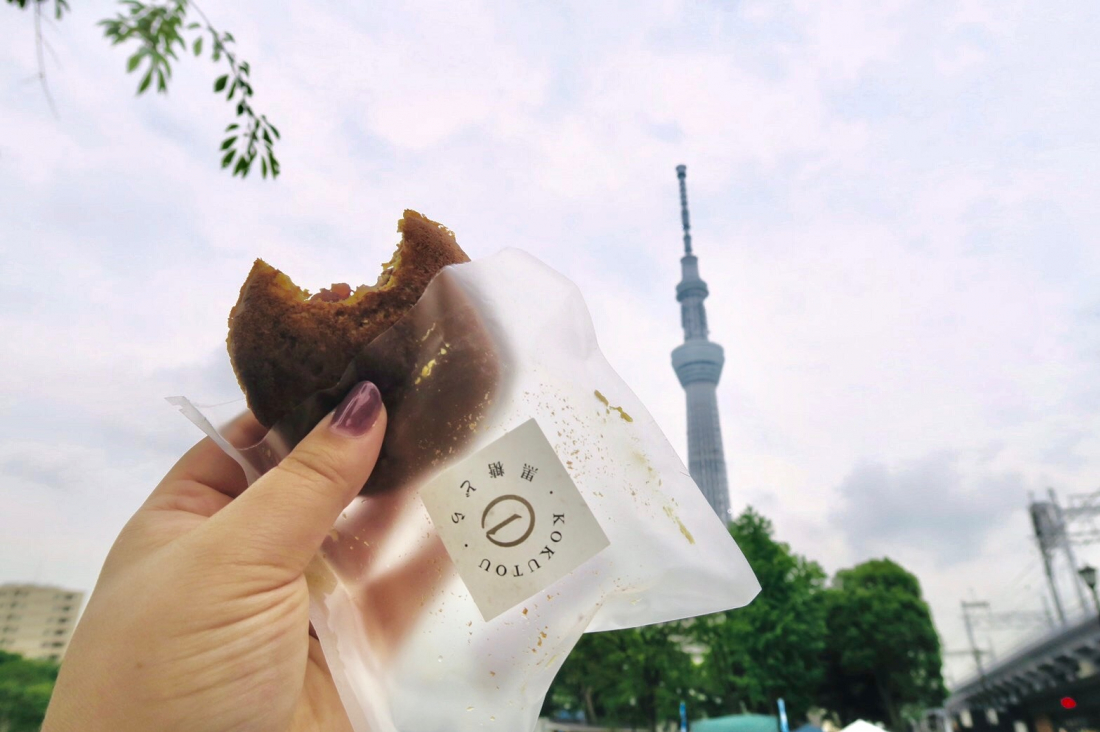 We grabbed some dorayaki (どら焼き, red-bean-filled pancake sandwiches) and ate them on a bench in Sumida Park, which was a quicker, cheaper option that was still lovely. (Unfortunately the seasonal kiwi dorayaki was sold out, but the brown sugar one was good too!) 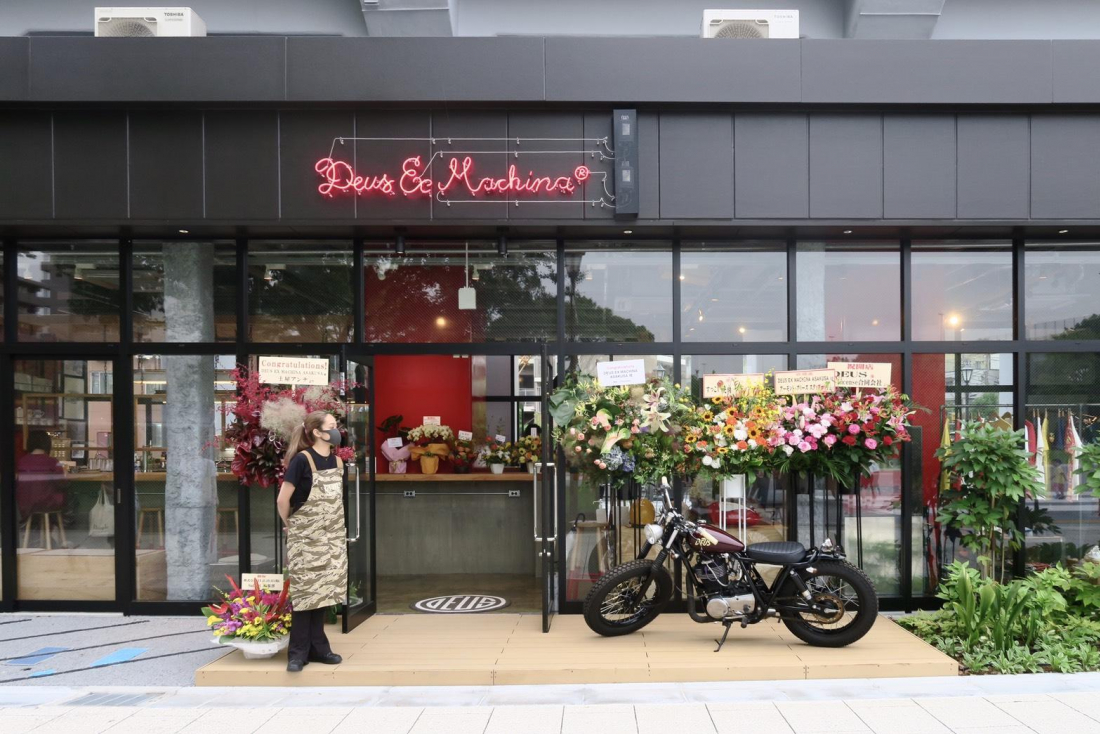 With the rest of the shops still yet to open, our last stop at Tokyo Mizumachi was Deus Ex Machina, a business that might be mystifying for first-time visitors. Inspired by "Australian surf and bike culture," Deus Ex Machina is part menswear clothing shop, part motorbike gallery, part cafe, part bar. 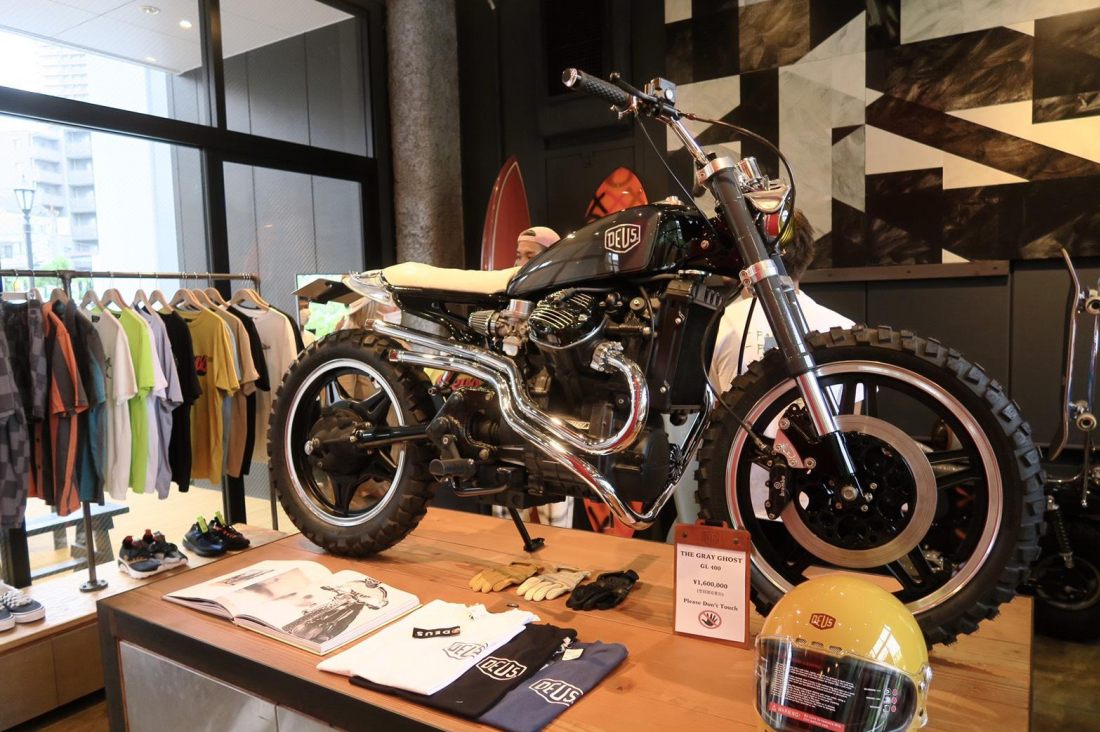 On display are entire motorbikes and bike art, and one side of the shop is a tiny boutique, essentially a couple racks of t-shirts. The rest of the room is a large bar/counter, with some extra seating inside and outside on the canal-facing terrace, and a menu of coffee and sandwiches. Unfortunately, nobody on the Japankuru team is a bike fanatic, so you'll have to tell us how cool this place is. 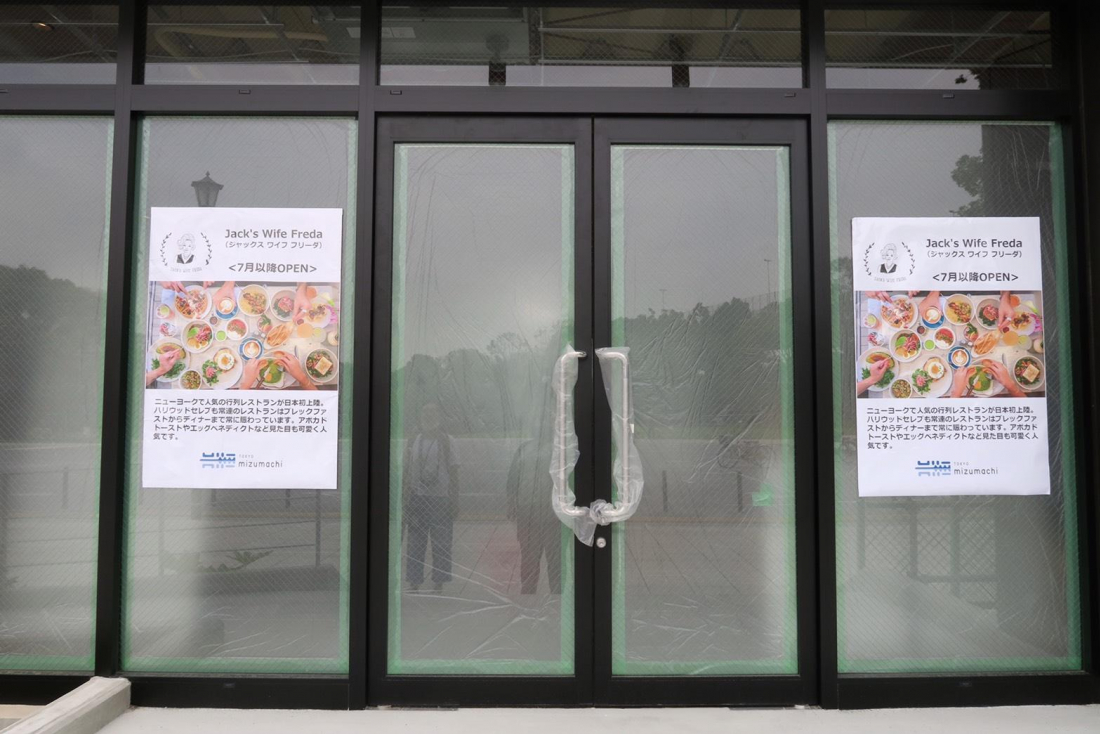 Much of the East Zone, still under construction, will be a hostel and a sports complex, so perhaps less interesting to a casual passer-by. But we're still waiting for Tokyo Mizumachi's remaining handful of restaurants, breweries, and bakeries to open in the next month or so. We hear Jack's Wife Freda is a popular brunch spot in New York, and we're ready to give it a try! 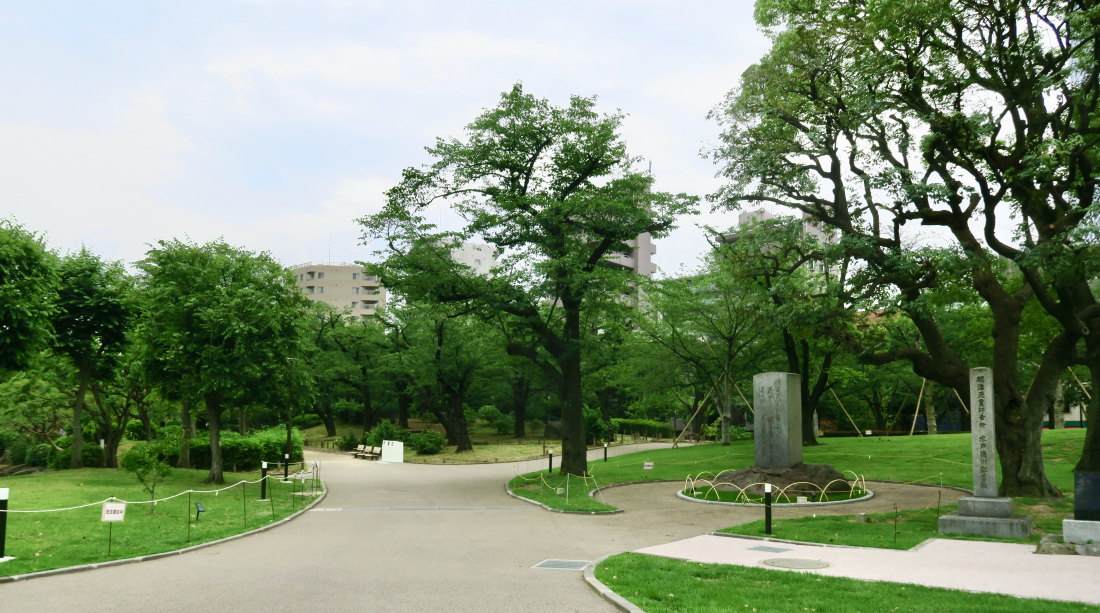 With daylight fading, we took a little walk in Sumida Park, and then decided to walk the rest of the way to Tokyo Skytree. 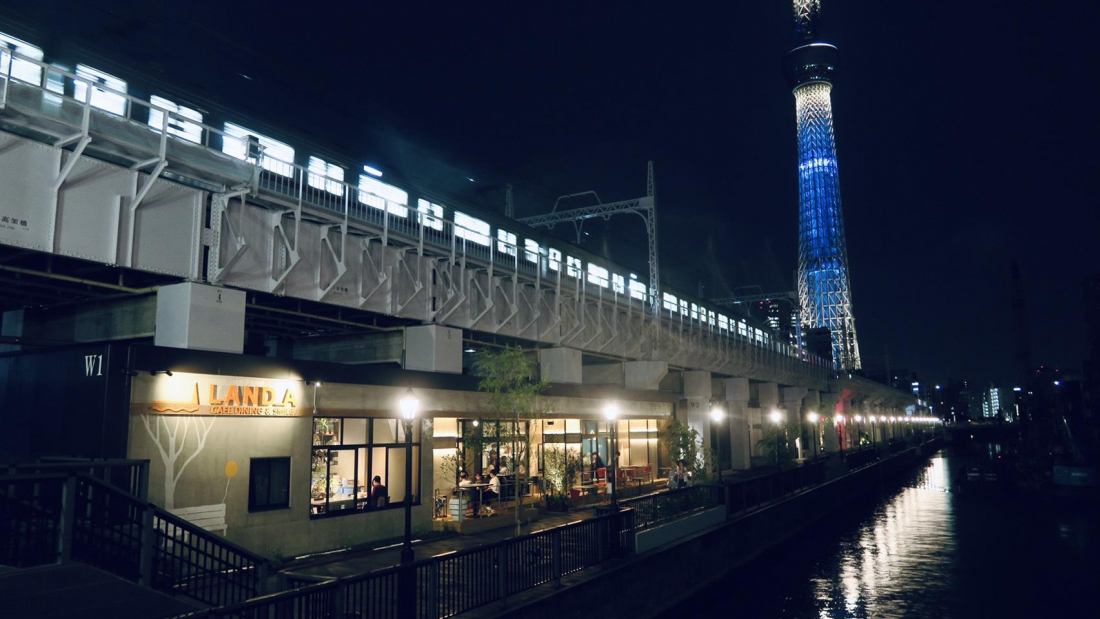 From the end of the Tokyo Mizumachi West Zone to Skytree is only about a five-minute walk! Which means that from Skytree to the edge of Asakusa, across the Sumida River Walk, is only 10 minutes or so. A tour of Asakusa, including Sensoji Temple and the popular Nakamise temple shops, lunch at Tokyo Mizumachi, and an evening trip up Tokyo Skytree seems like a pretty ideal day in Tokyo! 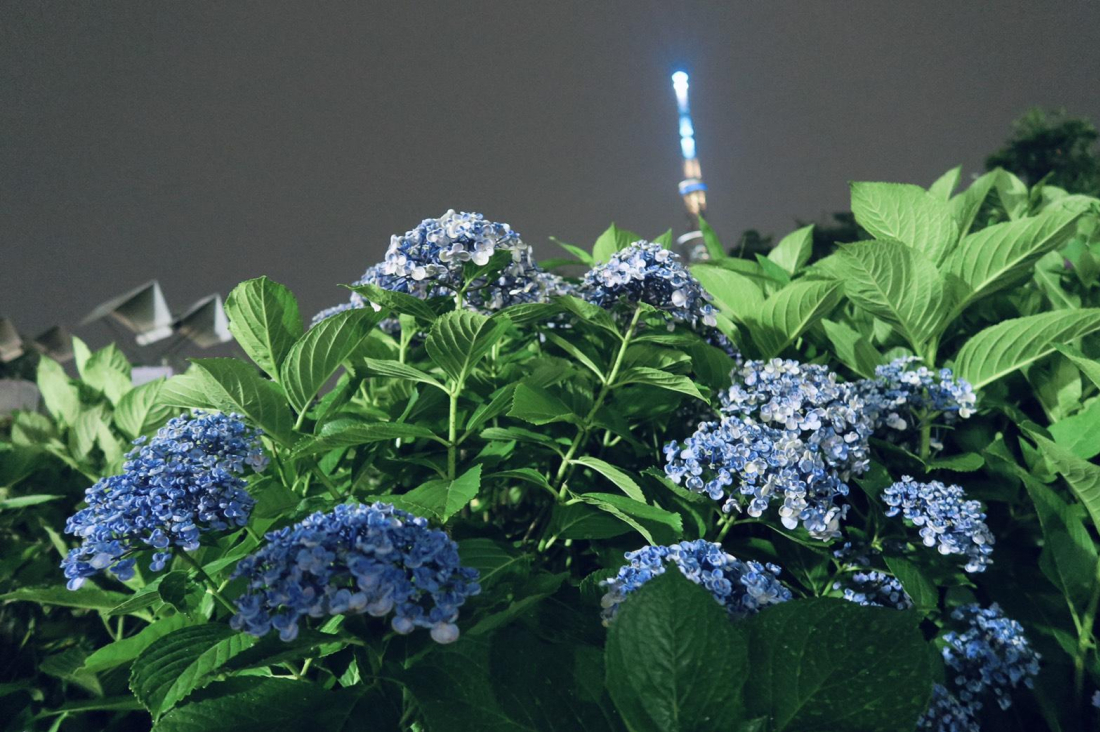 (Right now it's hydrangea season, too, so keep an eye out!)

Thinking about adding a trip to Tokyo Mizumachi to your next Tokyo itinerary? Living in Tokyo and already made your own trip over to the new shopping area? Let us know on the Japankuru twitter, instagram, and facebook, we'd love to chat!