What Is Tsuyu? How to Enjoy Japan's Damp and Beautiful Rainy Season

What Is Tsuyu? How to Enjoy Japan's Damp and Beautiful Rainy Season

Daily downpours and blooming flowers make June in Japan an interesting experience.
What and When is Tsuyu? 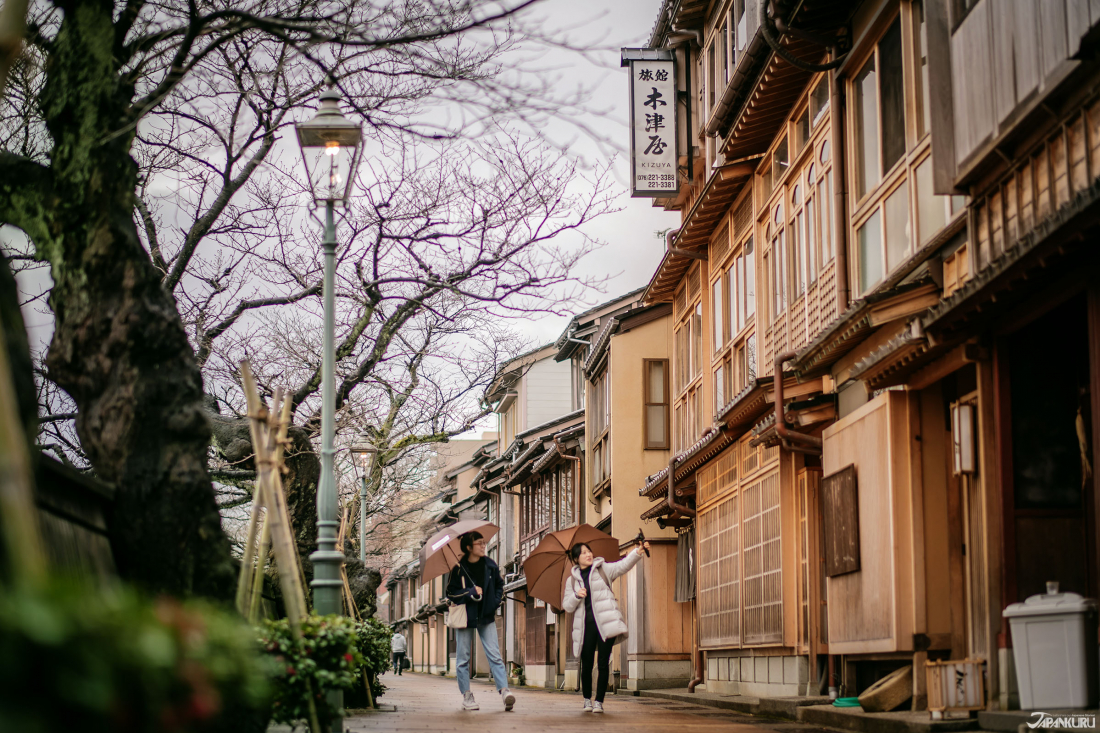 The people of Japan area proud of their country's four seasons. The seasonal celebrations and traditions that come with spring, summer, fall, and winter are an intrinsic part of Japanese culture. But while poets wax rhapsodic about the beauty of spring and fall, you'll hear less about one of Japan's shorter seasonal periods: tsuyu.

Tsuyu (梅雨) is Japan's rainy season, and it sweeps over Japan early every summer. For most of the country, the rainy season lasts from around early June to the second half of July, shifting earlier or later by latitude. Japan's humid summer weather can stretch late into the year, but it generally starts here. And while it doesn't rain every single day during tsuyu (in fact they say that the chance of inclement weather during tsuyu is about 45% every day in Tokyo), the rain is definitely frequent. Each day you're just about as likely to encounter a thunderstorm as blue skies, so it's really no surprise that many people tend to visit Japan later in the summer.

But, none of that means you should avoid a trip to Japan during tsuyu! And if you've already got one planned, you certainly don't need to worry. There are plenty of ways to have a great time in Japan during the rainy season.
How to Enjoy Tsuyu in 4 Steps ・ Making the Most of Japan's Rainy Season

Start your Japanese experience before your trip even starts! Teru teru bozu (てるてる坊主) are little dolls made of white paper or cloth, and they can look a little like the ghost dolls made around Halloween in other parts of the world. But teru teru bozu aren't supposed to be scary―at least not for humans. They're meant to work a little like scarecrows, except they're made to scare away the rain! (You might have seen them at work in the popular anime film Weathering with You.) Make a couple of teru teru bozu and hang them in the window before you leave for Japan. Hopefully the Shinto gods of Japan will listen and give you sunny days all throughout your travels. 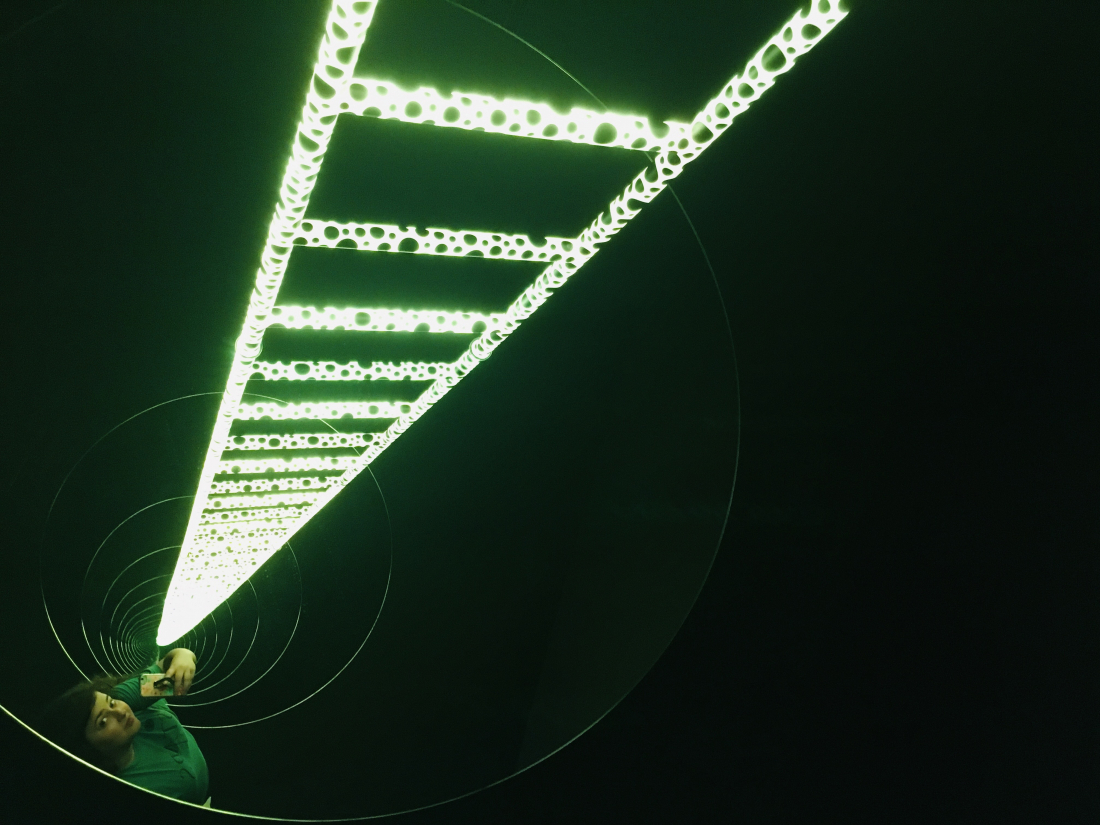 Teru teru bozu not working to keep the rain away? Well there's plenty to enjoy indoors in Japan, too! Sing karaoke in Shibuya, spend a morning in a cat cafe, splurge on a multi-course meal of crab cuisine to last the afternoon, or head to one of Japan's thousands of museums! Art museums like the Yayoi Kusama Museum (shown above) are quite popular, and museums and galleries across Japan feature everything from contemporary creators to ancient Japanese art, even European old masters. 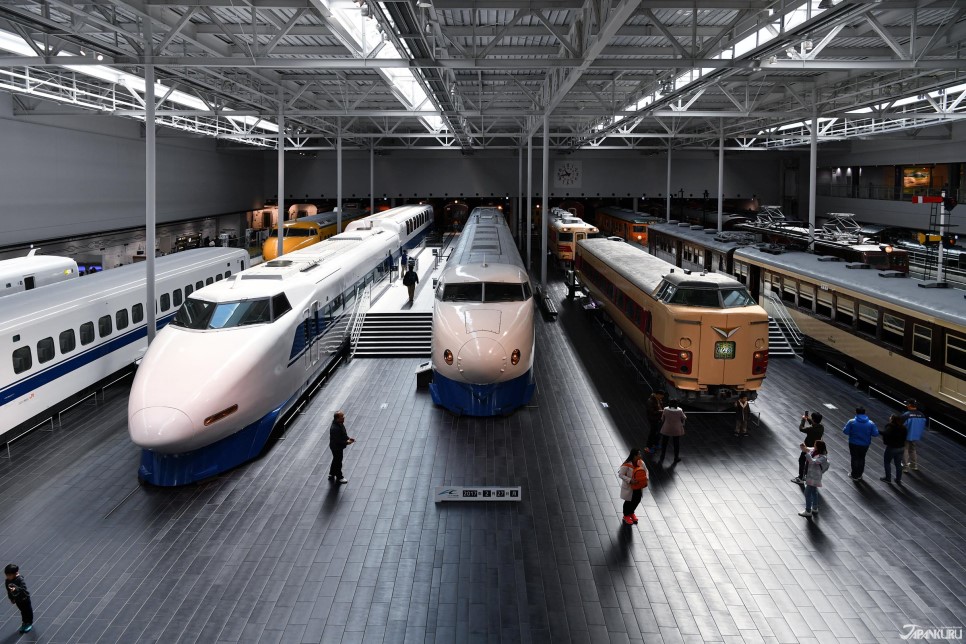 Don't think you're an art museum kind of person? There is a great variety of museums in Japan! Railway lovers can't resist the SCMaglev and Railway Park in Nagoya.

The extremely popular teamLab "digital art museums" are experiential and interactive facilities with rooms that experiment with light, sound, and feeling to create otherworldly experiences, so they're obviously great for rainy days as well! Just don't forget to snag a ticket in advance.

The museums that focus on popular media, like the famous Ghibli Museum and Snoopy Museum Tokyo, are especially fun for travelers of all ages! 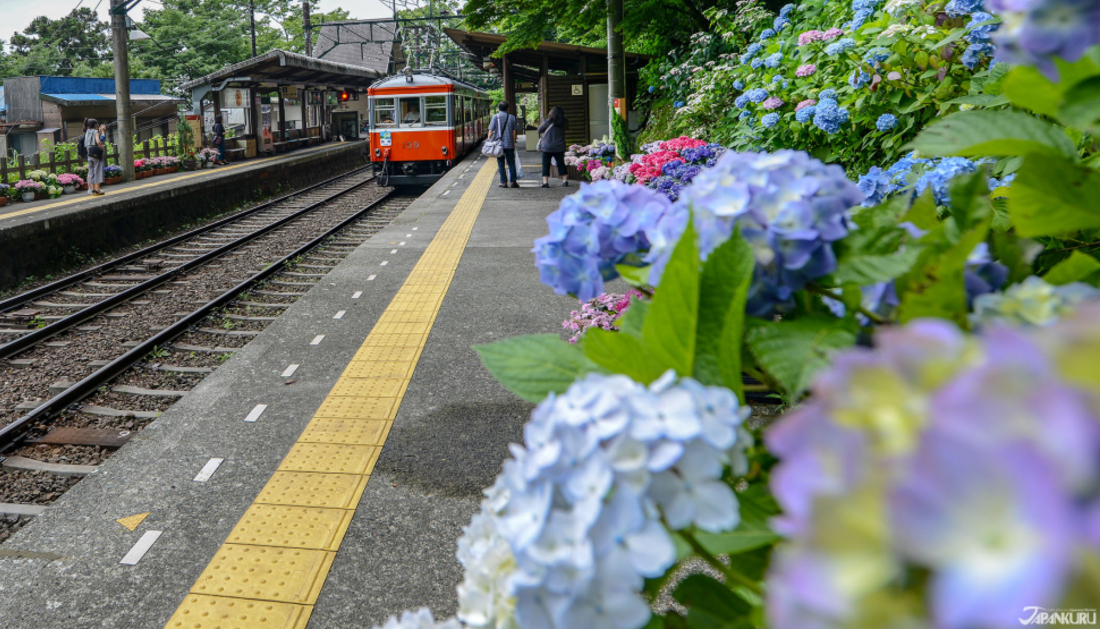 It might seem like kind of a drag to go out sightseeing in the rain, but sometimes the wet weather can make for a particularly enchanting experience. (And you won't find a better excuse to buy a cute Japanese umbrella as a souvenir.) Tsuyu coincides perfectly with Japan's hydrangea season, and while the flowers are perfectly nice on a sunny day, the rain gathering on the many blue and purple hydrangea petals brings out a new beauty. The colors seem particularly vibrant, and the light glitters off the raindrop-covered flowers. 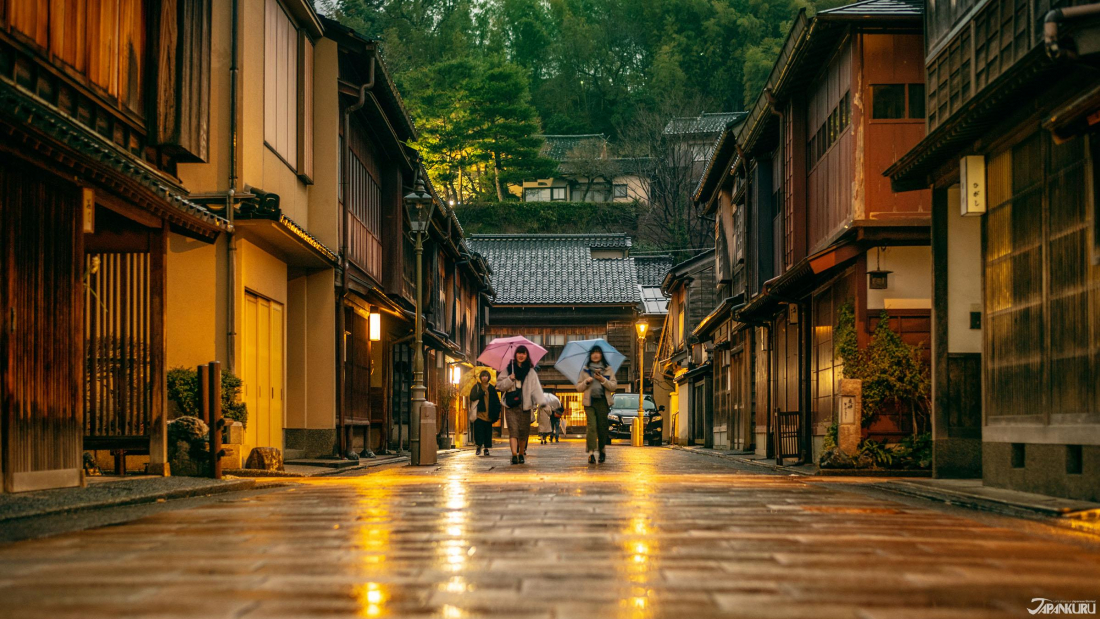 The rain adds a romantic mood to many popular Japanese sightseeing destinations, as well, including the old-fashioned teahouse streets of Kanazawa. The centuries-old Japanese architecture never looks as good as it does glistening in rain and glowing in the streetlamp light.

④ Become One with Tsuyu!? - Soak in the Water 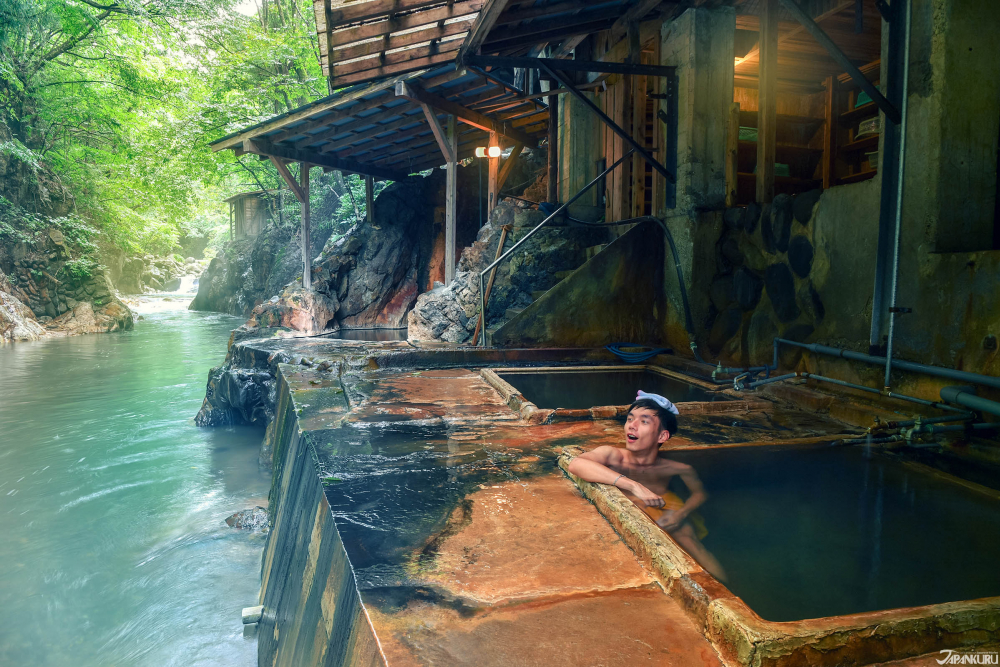 Tired of carrying around an umbrella, and feeling ready to give in? Well, it turns out, that can be a pretty blissfully relaxing experience! Immerse yourself in the rain (somewhat literally) by indulging in an outdoor onsen bath. Onsen (温泉, hot springs) are extremely popular throughout Japan, and many onsen bathhouses offer outdoor baths open to the elements. Surrounded on all sides by steaming hot natural spring water, a little bit of rain falling on your head doesn't seem like such a big deal. 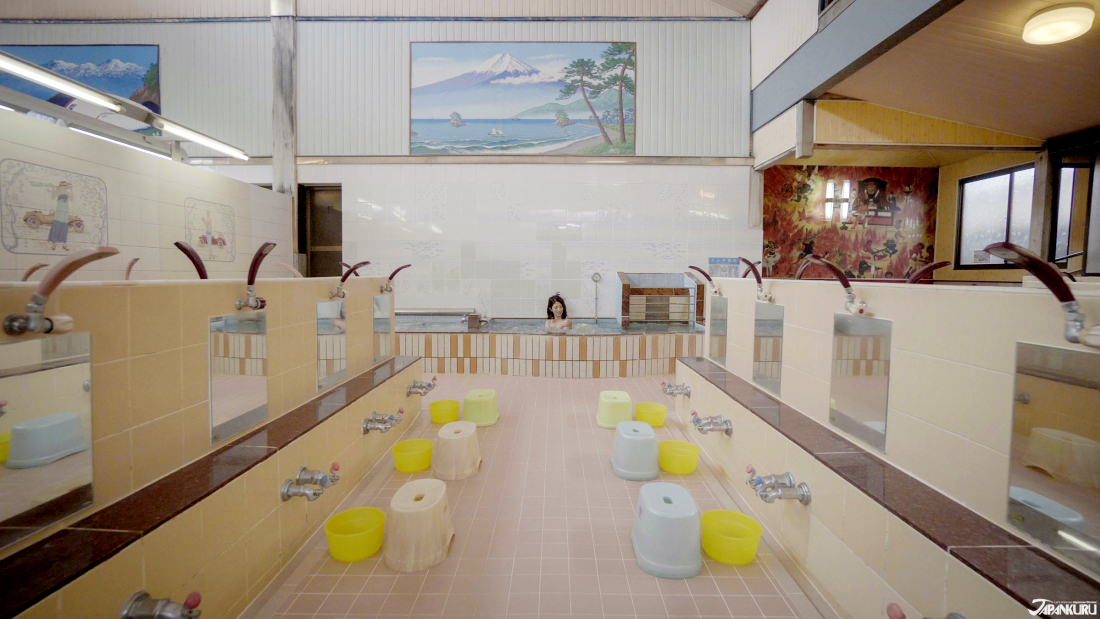 Of course, for those who'd rather soak in only the sounds of the rain and stick to normal bath water on their skin, Japan has plenty of indoor hot springs and public baths (銭湯, sento). Listen to the pitter-patter of the rain on the window while zoning out in the warm tub.

What Are Your Plans for Tsuyu?

Whether you want to brave the weather and get a little wet, or explore Japan using the subway to slip from one indoor attraction to another, tsuyu doesn't have to stop you from having an amazing time during your travels! Let us know about your rainy season plans, ask us questions about Japan, and tell us about your past adventures in Japan on our twitter, instagram, and facebook!