One of the main things to look forward to when traveling to Japan is experiencing Japanese culture. Whether it is wearing kimonos and walking around the old streets, tea ceremony, or going to a big anime festival, you become a part of something you have yet to experience in your home country. Towards the end of the summer, JAPANKURU went around Northern Tochigi and seeing its unknown beauty and experiencing things like zazen (Buddhist meditation where they hit your shoulder with a board). 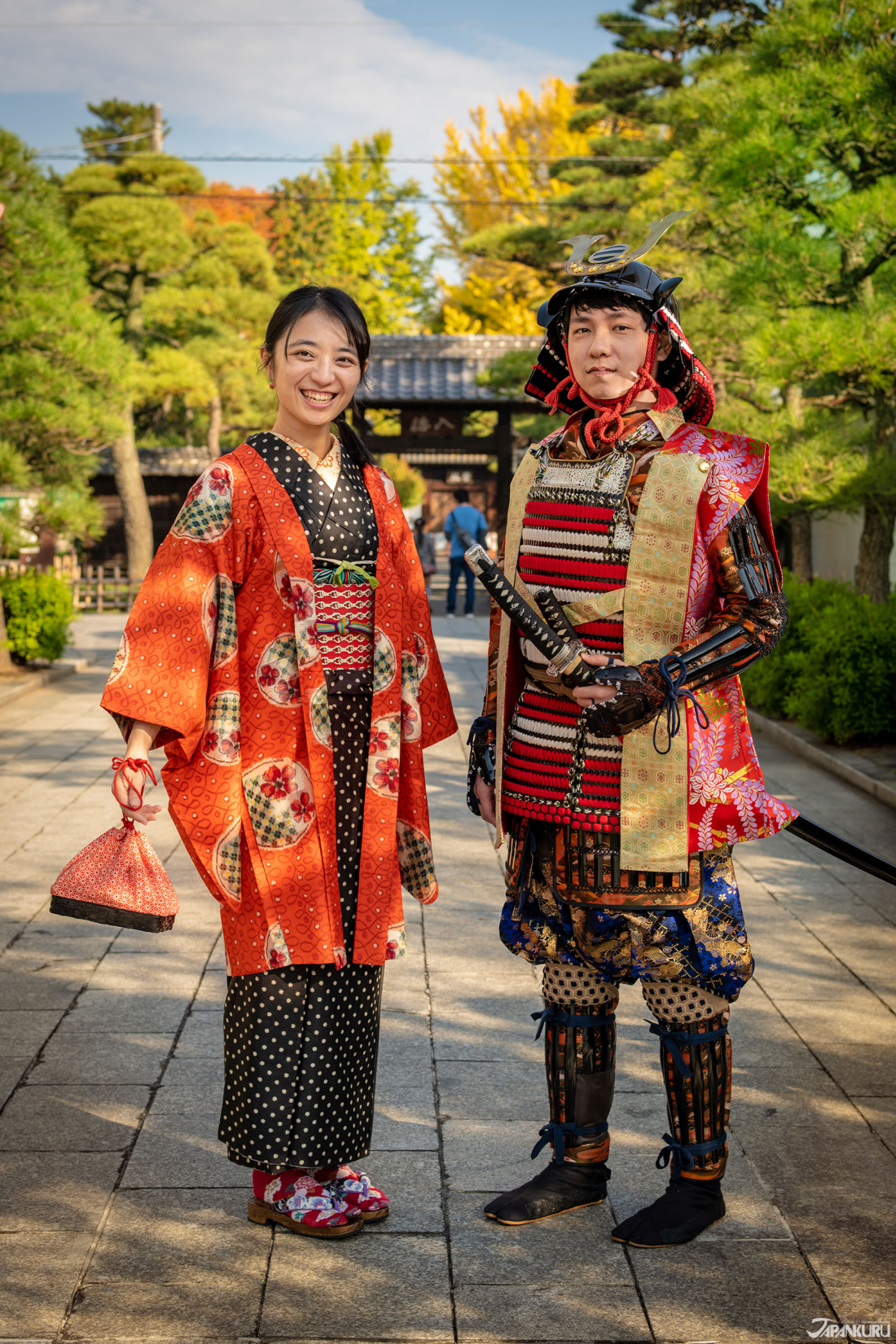 This time we made our way to Southern Tochigi just in time for the autumn foliage. This trip seemed to be more about going back in time which gave us a whole new look at the Kanto region. Due to Tochigi is so close to Tokyo we just rented a car and made a road trip out of the whole thing. There are plenty of places to rent a car from in Tokyo but since we have always had such a great experience with Nissan as an agency and the reliability of the cars, we rented from there again this time too.

When it comes to Ashikaga, most people think of the Ashikaga Flower Park (あしかがフラワーパーク) where you can see one of the most beautiful and biggest displays of wisteria flowers. Ashikaga is known for a lot more though like their shogunate that ruled during 1300s~late 1500s. The Ashikaga clan's probably most famous part of history is reviving a school which had been opened in the 9th century making it the oldest school in Japan, the Ashikaga School (足利学校; Ashikaga Gakko). During this trip we did not go here unfortunately, rather we focused on a different side of Ashikaga culture and that is their silk textiles. Since the end of the Heian era (794 to 1185), Ashikaga has become an important silk producing area in Japan. Among some of the famous textiles that comes out of Ashikaga, the fashionable kimono "meisen silk" stands out the most.


Entering the Ashikaga Information & Communication Space (足利まちなか遊学館 Ashikaga Machinaka Yuugakukan), the first floor mainly consists of exhibits of ancient fabric related materials like meisen kimonos. Meisen silk was a popular silk fabric used for casual kimonos during the Taisho and Showa eras (1920 to 1950). It is one of the Japanese silks fabricated by weaving pre-dyed threads, utilizing the tie-and-resist ikat technique making it a lightweight silk weave yet supple. Said to be heavily influenced by European painters, meisen silk exhibits striking, bold and geometric prints. You can wear a meisen kimono for 90 minutes for 3500yen, but if by chance you would like to extend the time, you can for an extra 500yen for every half hour for up to 90 minutes.

Unfortunately, only women can wear meisen but there is another option and that is becoming a bushido (Japanese warlord)! Which if you ask me is the better of the two. Both meisen kimono and bushido outfits can be around out so why not put one on and explore the town?!
★Ashikaga Machikanaka Yogakudan (足利まちなか遊学館)
Google Maps
⏰9am～5pm
Closed: Every 3rd Monday, in the case the 3rd Monday is a Public Holiday, the following day will also closed
Official area homepage


Approximately a 5mim walk from the Ashikaga School, you will come to the national historical site Bannaji Temple (鑁阿寺​). Bannaji Temple was once the home of the Ashikaga clan's founder, Ashikaga Yoshiyasu and much of it still remains as it was like with the moat around the temple. There are many important historical sites from the Kamakura period (1185–1333) to the Muromachi period (1336 to 1573), including the ancient gingko tree designated as a National Treasure and the Shoro bell tower which is a National Cultural Property.

While walking around the temple, we saw a small shop Dainichi-chaya (大日茶屋) selling Ashikaga steamed dumplings (足利シュウマイ; Ashikaga shumai). Normally shumai are stuffed with minced meat but Ashikaga shumai are vegetarian! Here was also the first time we have ever had the choice of having the shumai fried. It was a taste and texture completely new to us. If you are looking for something with more portions the yakisoba (grilled noodles) is another famous option.
★Bannaji Temple (鑁阿寺)
Google Maps
Official website


The self-produced red wine Ashicoco was once used in first class on JAL and ANA flights, and the company it comes from COCO Farms and Winery is one of the popular attractions in Ashikaga's suburbs. At COCO Farms and Winery, there is a small building that is a shop and restaurant allowing you to dine or just simply try the wines from the winery if you choose. Also behind the restaurant is an area where you can learn about the history of COCO Farms and Winery and the processes involved in making their wine. 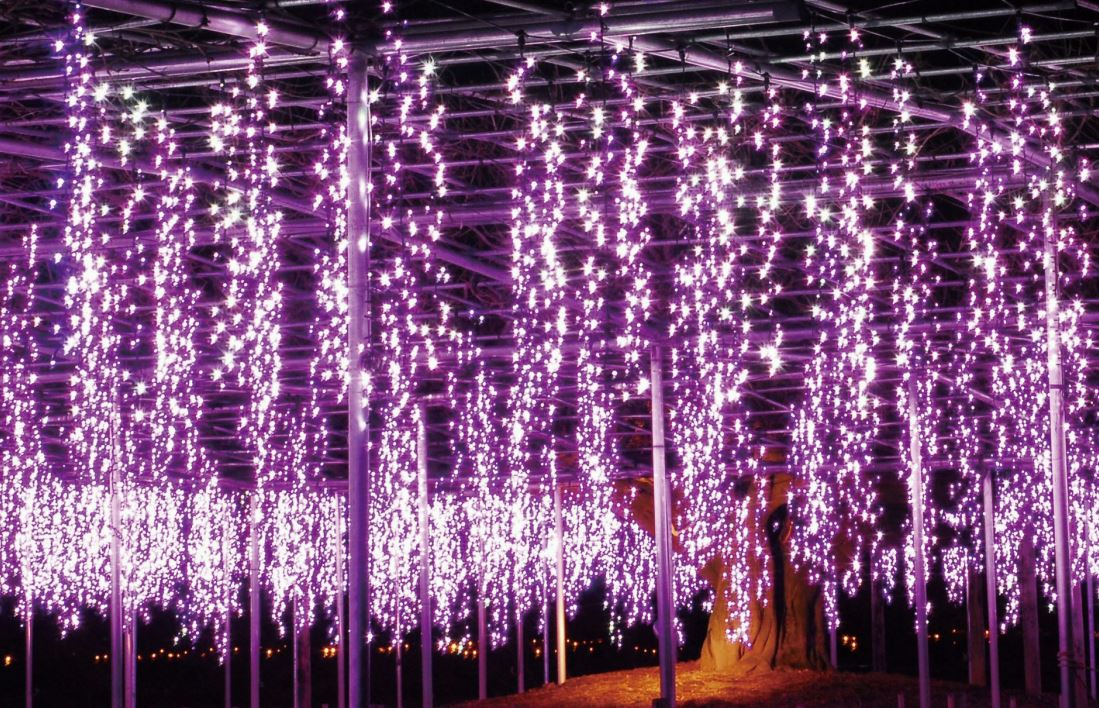 Ashikaga Flower Park
A Garden of Light and Flowers

Although there weren't any light ups at the Ashikaga Flower Park when we visited Tochigi, we have been in the past so we thought it was worth mentioning in this article. If you come to Ashikaga between October and the beginning of February you should be able to see the illumination at the park. Areas in the park have different themes and apparently change during the event. Before you go be sure to check out their website first just in case any information has changed.


As the fifth largest populated city in Tochigi Prefecture, Sano has become a topic in recent years because of Sano ramen. It has become such a big thing that the area made an official map of Sano ramen shops for those who enjoy ramen. But if you think that Sano only has ramen, you'd be wrong. In typical Tochigi fashion, the city of Sano has some very beautiful nature spots such as the Izuruhara Benten Pond (出流原弁天池) which was selected as one of the 100 best and cleanest water sources in Japan. There is a shrine nearby and the entire area is so beautiful in the fall, a must-see. 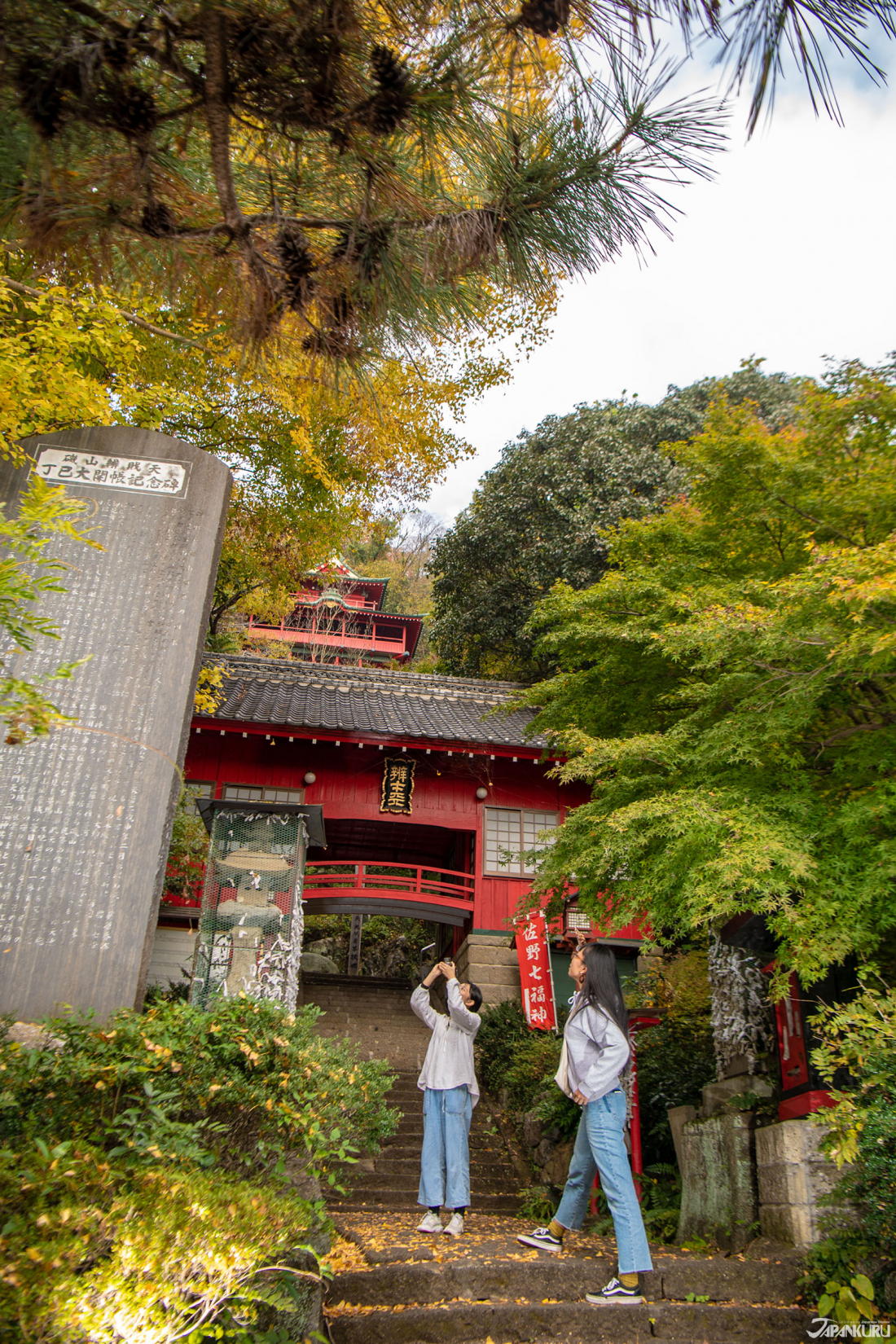 Inside Isoyama Park is a shrine and a beautiful pond. Benten Pond is Japan's hundred famous water along with being a prefectural cultural property natural treasure. This pond is made of freshwater discharged from the cave formed by melting limestone along the Paleozoic layer and has a temperature of 60℉ (16℃). Also, in this pond, there is a legend of the Asahi daughter who hid golden treasure here.

The Isoyama Banzaiten Shrine has a very unusual construction and there is on the precinct of a rocky mountain. It is said to be a friend of the Kiyomizu Temple in Kyoto due to its unique construction method that does not use nails. It is a beautiful spot where you can overlook the Sano plain. Also when you go to the shrine be sure to look for the statue of a white snake!


As one of Kanto's ramen representatives, the biggest characteristics of Sano Ramen is its use of bamboo to flatten and prepare the dough and the soy sauce broth. This time, JAPANKURU visited "Banri" (万里) ramen shop, which is one of the most popular shops in terms of "Sano Ramen". What we found interesting was depending on the person the soy sauce broth tasted different. To some it was refreshing, others saltier. Even during on weekdays the store is basically full by noon.
★Sano Ramen Banri (佐野ラーメン  万里)
Google Maps
⏰11～6pm
Closed: Wednesdays


The current town of Mibu has been orchestrated as a toy town. A lot of toy factories are gathered, offering toys in/from Japan and abroad, including manufacturers such as Bandai and Tomica. In the 1990s, the manufacturing of toys moved to China, but Mibu has made an area for these toys even holding events. It is from there that in 2007, the Bandai Museum opened.


Speaking of Japanese toy manufacturers, everyone should have heard the name of Bandai at some point in their lives. I mean, you have your classic figurines from Gundam, Sailor Moon, One Piece, Dragon Ball, Digimon, Astro Boy, etc. are all under Bandai. Bandai has built a new toy museum in Miyako-cho, displaying toys, accessories, and collectibles made by Bandai. Many are rare European/Western antique toys which surprised us.
★Bandai Museum
Google Maps
⏰10am～4:30pm (admission ends at 4pm)
💴Adults 1000yen, Children 600yen, 65 and older 800yen
Official website


The Mibu Highway Park, which is about 12 times the size of the Tokyo Dome, is an interesting rest stop.  In addition to the general resting facilities, it also has Tochigi Wanpaku Park and Mibu-machi Toy Museum. Just park your car at the rest stop and check out local vegetables and fruit for sale or walk to the park or museum mentioned above. Since it is along the main highway heading back to Tokyo, it is a great place to make a pitstop before making the trip home. Especially since anymore it is rare to see such rest stops (that includes things like a park and museum) in Japan.


There is a sweet shop called Mib-TOWN at the station on the way. "Shogun's Strawberry Ice" (将軍のいちご氷), which is shaved ice (kakigori) is currently very popular within Tochigi. Why though? It is because to make this shaved ice, ice is not used at all! Instead of ice, what they do is freeze ripened strawberries from Tochigi, freeze them, then slice the strawberries while still frozen. By far one of the coolest (literally) deserts/snacks we have ever tried.
★Mib-TOWN
Google Maps
⏰10am～6pm, Sat and Sun 9am～6pm
Closed: Wednesdays
Facebook page


In the first two years, Kanuma City, which was officially announced as the "City of Strawberries", is also famous for its azalea flowers. Then in terms of crops, we were surprised to learn it is also famous for strawberries, leeks, pears, and tomatoes. Located in the north of the Kanto region, the area consists of mountainous hills and terraced terrain. Kanuma was once the country's first wild state hemp producing area so because of this, the barley was cultivated to make the buckwheat more delicious. Which is why this time while in Kanuma, fruit picking and eating soba (buckwheat) noodles became our primary purpose.

HIZATSUKI Fruits Plaza (鹿沼ひざつきフルーツプラザ)
Try All the Apples You Want for 500yen!!!


I remember the last time we introduced Watanabe Vineyard in Nasukarasuyama City where you can try a few of the homegrown grapes for 100yen, but HIZATSUKI Fruits Plaza raises the bar. In addition to eating all the apples you want for just 500yen, you also get to pick the apples yourself. Which is the real "fruit picking experience" in Japan if you ask us. Something else you may be happy to know is that this place has the qualifications of an organic farmer certified by Tochigi Prefecture. Along with apples, the orchard also grows fruits like strawberries, cherries, and grapes.
★HIZATSUKI Fruits Plaza (鹿沼ひざつきフルーツプラザ​)
Google Maps
⏰10am～6pm, Sat and Sun 9am～6pm
Closed: Wednesdays
Official website


Most people when you eat soba (buckwheat) noodles, you eat it with leeks. However here was the first place we have ever heard of using a different greenery in place of leeks. As a special dish of Iori, you can eat soba noodles with chives. It is surprisingly fresh and does not overpower the soba taste. In addition, the tempura in the store is also very distinctive, rather than eating it with the typical tempura sauce, you pare it with salt.
★Iori (手打ちそば 一庵)
Google Maps
⏰11am～2:30pm, 5:30pm～7pm
Closed: Wednesdays
Official area homepage


Our journey doesn't stop there! Be sure to check out the second half of our Southern Tochigi trip here!!