Like traveling the world, without ever leaving Japan! Far from the stereotypical Zen temples and views of Mount Fuji, these spots are in Japan, but they sure don't look like it.

Wait, This Is in Japan!?

Japan certainly has all of the above, and your average trip to the land of the rising sun will take you through plenty of scenery just like you'd expect. But today we'd like to discuss a few Japanese destinations that might just surprise you. From Japanese deserts to the Alps... of Japan, and everything in between, we're about to take you on a journey around the world (without ever leaving Japan)!
1. Sun Messe Nichinan, Miyazaki 【サンメッセ日南、宮崎県】
Travel far south to Japan's southern island of Kyushu, to a grassy cliff in Miyazaki Prefecture overlooking the sea, and you'll find yourself standing on the coast alongside seven huge moai statues, built on the hill by the shore of Sun Messe Nichinan.

Just how did they end up here? These seven moai were actually built in commemoration of the Japanese people who helped the restoration of the original Moais on Easter Island. Generally, reproductions of the moai on this scale are prohibited, and out of respect to the people of Easter Island, you won't see huge moai just anywhere. These seven were specially allowed as a token of appreciation, thanking those in Japan who supported the project to restore the original moai far across the pacific. The moai of Miyazaki are also said to symbolize the ancient explorers of Easter Island―we hear those ancient sailors traveled pretty far, but Japan sure is quite a trek!
While local tribal chiefs allowed the restoration project members to make copies of the moai to bring back to Japan in the 90s, the material is actually different from the originals. The crew got special dispensation to recreate the image of the moai, but they still weren't allowed to use or bring home the stone quarried from Easter Island itself. 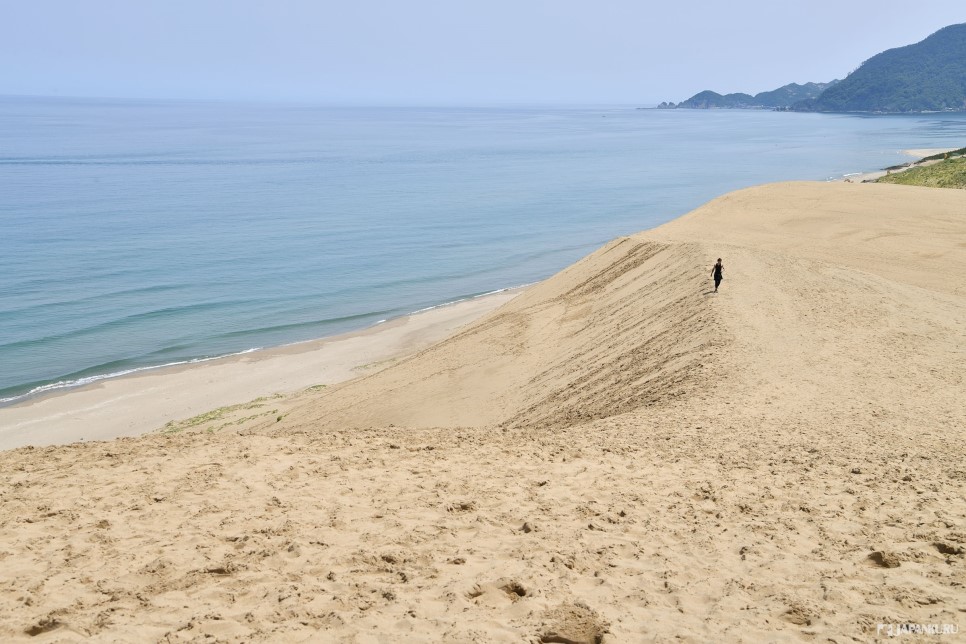 Tottori Prefecture is spread along the coast with lots of inviting beaches, but one beach in particular looks a little different, thanks to this gigantic coastal sand dune. Not quite your average beachy dune, this one is 16km (10 miles) east to west and 2km (1 mile) north to south. Look away from the water, and it's like you've suddenly entered the desert. The sunsets shimmering on the sand and the water together are really something to behold.

The people of Japan like to think of it as their own little Japanese desert, too. It might not have quite the size of the Gobi, but the mountains of sand are enough to impress, and visitors can take camel rides to really take advantage of the desert atmosphere. The wide open expanse is also a popular spot for  paragliding, mountain biking, and other sandy outdoor activities.

You can even slide down the sand like you're sledding on snow!

Tottori Sand Dune
Address: 2164-661 Fukubecho Yuyama, Tottori
Official Website (jp)
3. Tsunoshima Bridge, Yamaguchi【角島大橋、山口県】
The ocean can certainly be beautiful on its own, but the view of this bridge over blue waters, looking like it might just go on into eternity, is even more spectacular. This is the Tsunoshima Ohashi Bridge in Yamaguchi Prefecture. It was built in the year 2000, to connect Shimonoseki on mainland Japan and Tsunoshima Island. This bridge was voted to be the best bridge in Japan in 2015, which is really saying something considering the number of bridges around the country that are sightseeing attractions in and of themselves.
It's definitely worth finding a way to drive along the bridge itself, so you can enjoy the scenery all the way from Shimonoseki to the island shores. Another summer destination, perhaps? (It's certainly a good option for everyone trying to continue social distancing during the COVID-19 outbreak.)

Tsunoshima Bridge
Address: Tsunoshima, Toyokitacho Oaza, Shimonoseki-shi, Yamaguchi
4. Fukugi-Namiki, Okinawa【フクギ並木、沖縄】
A little like the Hawaii of Japan, we've arrived in Okinawa! But while Okinawa looks more like a tropical island and less like stereotypical Japan, this particular spot is unique in its own way. Fukugi-Namiki Road is known for its maze-like path through dense island greenery, like a little swatch of jungle just minutes from the ocean and small-town Okinawa. You can ride along among the trees with a local guide in a buffalo-drawn carriage, or savor every step walking through this little rainforest.
On the other side of the thickly grown jungle-like trees is the beach! You're never more than a few steps from Okinawa's iconic clear waters. It's no surprise that this area is also popular as a site for wedding photos, since it gives everything an island rainforest vibe, despite still being in Japan! The dappled light filtering through the green leaves lends a lovely mysterious effect to the photos here.

Fukugi-Namiki Road
Address:  389 Bize, Motopucho, Kunigami-Gun, Okinawa
5. Hakuba, Nagano【白馬、長野県】
Depending on where you're from, this last one might be less of a surprise. Japan's ski slopes are growing in popularity thanks to amazingly dry powder snow, and have long been a winter destination for Australians. But for those of us who think of Japanese mountains and only imagine a tiny snow cap on top of Mount Fuji, it's time to meet the Japanese Alps. The dramatic peaks are snow-capped year-round, and while the winter brings skiers from around the world, hikers flock by in the warmer months. The slopes are so good, the 1998 Winter Olympics in Japan were held here, as well. We can see why they were named after Europe's famous mountain range.

Hakuba, Nagano
Address: Hakubamura, Kita-Azumigun, Nagano
Feeling a Little Lost in Japan?
Traveling through Japan but experiencing other countries... we understand it's a little confusing! But these spots can make for a pretty interesting Japanese vacation. If you're ready to break up your Japanese itinerary with something unique, you've got five new unexpected destinations to add to the list. And if you're still feeling confused, follow us on twitter, instagram, and facebook to get your questions answered and see more updates, info, and itineraries from Japan!