Shirasu, unlike the commmon whitebait you find, this gem-like fish is very tasty and used in many dishes in Japan. We will take a quick tour of how the shirasu is used in Japan, when is the best season and where to find them around Japan.

※Regarding Our Travel Information During the Coronavirus Outbreak.

Due to the COVID-19 outbreak and efforts to prevent the spread of infection, some facilities may have altered opening dates and times, be partially closed, or have limited menus. Before leaving for your destination, please check its official website for the latest information. In areas still in some form of lockdown, we recommend you avoid going out unless necessary. Look out for more Japanese travel information to plan future trips, new every day on Japankuru!

What Is Shirasu?
Shirasu 【白子：しらす】, or as we know it, whitebait, is a name given to juvenile fish of a few different varieties. Normally when we say shirasu we're commonly referring to a kind of sardine. It is eaten all around Japan, as part of breakfast, lunch, and/or dinner, but especially in areas near the ocean. From fresh ones to cooked ones, even dried ones, unlike other countries, in Japan, there are many ways to eat this fish.

In Japan, the fresh ones are referred to as "nama"【生：なま】and the cooked ones are normally called the "kama-age"【釜揚げ：かまあげ】, or "kettle-cooked". Some sprinkle the dried shirasu on their salad, for added flavor and calcium, mix it into their stir-fried rice, or even use it as a general condiment for dishes.

Shirasu is highly versatile in Japanese cuisine.
When is the season? 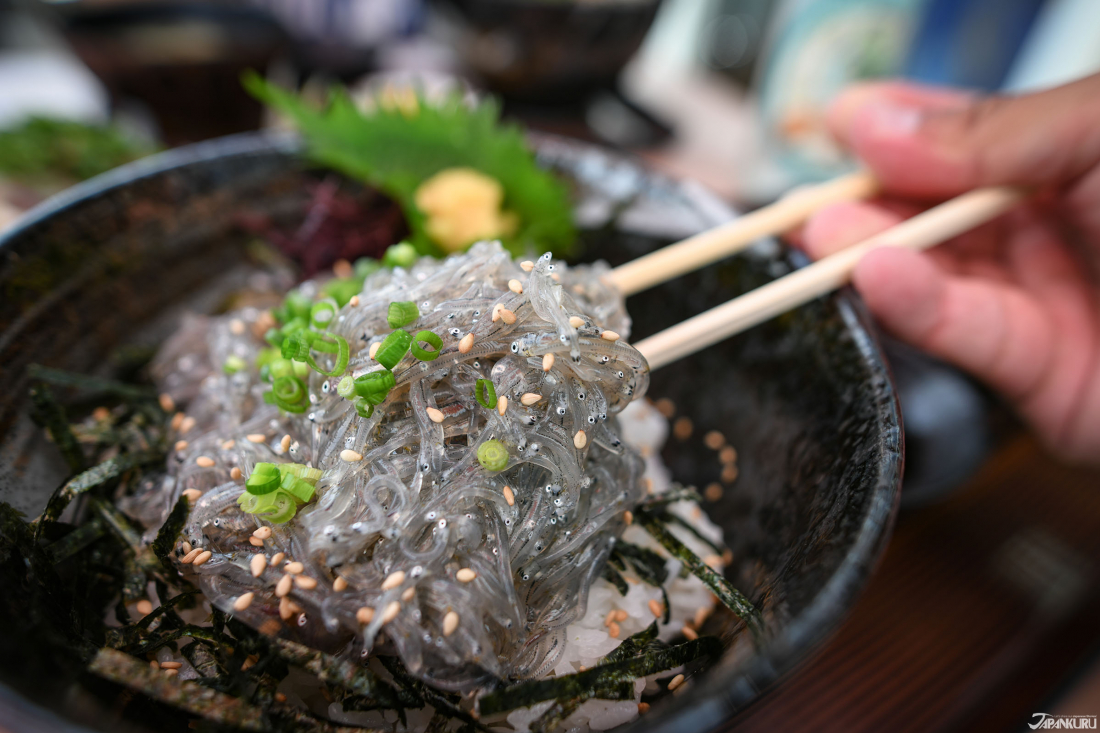 What do we even mean by this? Aren't they just all the same? What differences does it even make?

So, just like any other fish, whitebait actually comes into season as well.

Although shirasu can be found throughout the year, spring, just around April, or autumn, around October, are said to be the best seasons for the little fish in Japan. (Although this may vary depending on where in Japan you're at.) This is apart from the period of time when you're actually not allowed to catch them, which is from January to March in many places! You can't expect to find fresh shirasu all throughout the year, making it extra special when it's available.

The differences between the ones in the US, the UK, Australia, etc.

Maybe the main difference with the kind of whitebait that you get in other countries is that the size of the fish themselves is actually smaller, meaning that they are younger.

As the whitebait grows, its flavor actually changes.

The smaller kinds are the ones that can be properly called shirasu, and they have a sweetness to them.  As they grow older, the taste changes from sweet to a small packet of umami, and then as time goes on they start to have a slight bitterness, that adds complexity to the fish's flavor.

That is why the fresh ones served in Japanese dishes are the ones that are smaller.
Where can I eat shirasu near Tokyo?

If you're just searching for ordinary cooked shirasu, you should be able to find it at many of the places where they serve seafood in Tokyo. However, if you are looking for the fresh, raw ones, you'll need to travel a little away from the city.

The closest place you can get to from Tokyo would be the Kamakura/Enoshima area. It only takes about an hour and a half from Tokyo Station to get there! This region along the coast in Kanagawa Prefecture is called Shonan, and it's also famous for surfers, if that piques your interest.
What can you make with shirasu?
When you hear whitebait, you might think of those delicious crispy fried ones, or whitebait fritters. Those are delicious as well, but when you're in Japan, you might just be surprised with what dishes they make out of this small fish.

The crispy edges of the crust and the cheese along with that delicious savoriness of the whitebait, with the slight tanginess of the tomatoes... The smell of it, when it just appears right in front of you...

We were so impressed we wrote an article on this pizza, if you want any more details.

The simplest dish, and yet so tasty; this would be the most traditionally Japanese way of eating shirasu! The sweetness of the tiny fresh fish and the zing of the grated ginger, along with the savoriness of the soy sauce drizzled on top, it all just goes so nicely in a single bowl.

Where else can I eat shirasu in Japan?

Actually, the top three places to eat shirasu in Japan are sometimes said to be Hyogo, Aichi and Shizuoka Prefectures. However, Enoshima and Kamakura are also famous for shirasu, because the area is close to Tokyo and the quality of the local shirasu is quite high.

To be more specific, if you're looking for some other really great places to try the fish, in the Kanto region (the eastern part of Japan), there's the Suruga Bay or Numazu in Shizuoka. If you're in the western part of Japan (the Kansai region), you can go to either Awajishima in Hyogo, or Wakayama.

A quick round up!

If your looking for shirasu near Tokyo, the best place to go would be Enoshima. Just avoid heading over between January and March to make sure you can try them fresh! We recommend you sample the variety of different dishes that are available, so you get the most out of your shirasu experience.

All, the best on your next foodie trip to Japan!

The green tea fields of Shizuoka.

Heading to Shizuoka for more shirasu?

If you do want to go on a trip elsewhere in search of more sweet, tasty shirasu, try driving over with Nissan's car rentals. Take a look at the road trips that we've gone on before!

Or looking to go to Enoshima? Take a look at our recommended day trip to Kamakura and Enoshima, finishing it off with a beautiful sunset over the beache.