Getting a little tired of the crowds? Catch your breath in Kamakura.

A Trip to the Suburbs of Tokyo! Will Enoshima, and the rest of Kamakura, be your next destination this summer?

Whether you’re planning your next visit or you’re already here in Japan, sure you might have Tokyo all planned out, but do you know about these two spots just a short trip from the big city? Kamakura City and Enoshima are two destinations you can’t miss near Tokyo.

Kamakura is known as “The Kyoto of the East,” and is most famous for its "Daibutsu" (大仏), or huge Buddha. Run right over to Enoshima, and the area is so like Miami Beach that they're even sister cities! So a trip to the area gives you the best of both worlds. Plus, for those big fans of the manga Slam Dunk (we know you're out there!), you're bound to enjoy yourself in the setting of so many important scenes. 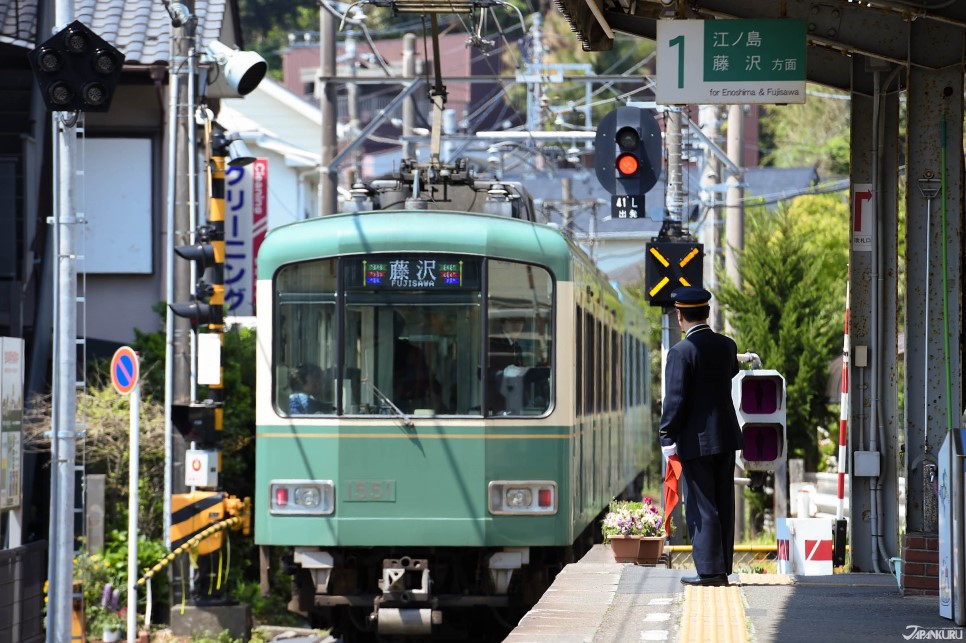 Finding your way to Kamakura and Enoshima.

You can get to Kamakura and Enoshima straight from Haneda Airport using the shuttle bus if you're ready to relax right off the bat. Otherwise, just catch the train over from Tokyo. To get into the heart of things you’ll need to change to the Enoden Line at Fujisawa Station, which you can take over to Enoshima station. This takes about an hour and a half from stations within Tokyo.


The Enoden Line will take you through some beautiful scenery on the way in from Kamakura, but don't push it and leave Kamakura City too late. You should definitely try to make it in time for the sunset by the beach in Enoshima.

So, what are we waiting for... let’s start our tour!

Located 10 minutes away from the Enoden Line's Hase Station（長谷駅）is this gigantic Daibutsu!
This Great Buddha is a Japanese national treasure. It weighs in at 121 tons, and stretches up to 11.4 meters (37.5 ft) in height.

Hasedera Temple was originally built the Kamakura Era, which means that it dates back to the 1100s! (Even more intriguing, there are legends saying that it originates from 500 years earlier than that!) It is located in a spot with a great view out front, looking out over the ocean and the whole local town.
From this fantastic viewpoint, during the summer you will be able to see 2,500+ hydrangeas, and during the autumn season, the area gets surrounded by Japanese Maples with leaves blushed bright red. Flower-viewing might be a big part of Japanese culture, but going out to admire the beauty of autumn leaves is immensely popular as well. There's even a word just for it, "koyo" (紅葉).

There are three jizo statues to find within the temple, and finding all of them brings you good luck! Instead of wishing you luck searching them out, we'll just say "ganbatte!" (頑張って), "you can do it!"

Houkokuji is another temple nice to visit in summer. The surrounding groves of bamboo keep the area nice and cool. Of course, we mean the temperature, but it looks pretty cool as well.
The temple serves a delicious bowl of matcha with a side of wagashi, traditional Japanese sweets, in the garden of the bamboo forest.

The jinja, shrine, that represents Kamakura!

The Tsuruoka Hachimangu Shrine was built in 1063 by Minamoto-no-Yoritomo, a Japanese Shogun of the time, by transferring a division of the Iwashimizu Hachimangu Shrine from Kyoto over to the area, creating a new branch.

Since the shrine owes its creation to the Minamoto family, the historical figures have become "ujigami" (氏神) at Tsuruoka Hachimangu, or local Shinto deities.
If you're wondering how your trip to Japan is going to turn out, don't miss out on this chance to get yourself an omikuji fortune. Hopefully the results will bode well for your return trip as well!

The entrance to the Goryo Jinja Shrine is closely located to the Enoden Line. So close, in fact, that you can grab a shot of the train tracks, and the train itself, from within the shrine grounds. This shrine is also one of the parts of Enoshima famous for its beautiful views of many different hydrangeas.

This lovely shrine filled with flowers is conveniently located between Kamakura's Daibutsu Grand Buddha, and Hasedera Temple, so stop by on your way between the two spots.

The Kamakurakokomae train station is now a fairly well-known spot in the area, since it's been attracting more and more Slam Dunk manga and anime fans in the past few years. Kamakurakokomae (鎌倉高校前) means "in front of Kamakura High School", a school that served as a model for one of the settings of the popular manga, and the high school itself has had problems with tourists forgetting that it's actually a functioning school! So, to all the Slam Dunk fans out there, instead of breaking into a high school, please enjoy this train station as an iconic spot in a beloved story.

One of the top beaches around Tokyo, where many Tokyoites come to surf, swim, and enjoy the great weather. If you're thinking about renting a car and driving all around Japan, the roads along the coast also make a nice driving route to see the whole area and the beaches.
On top of all the fun in the sun, if the weather conditions are good, you might even be able to see Mt. Fuji accross the water!

Fresh Shirasu-Don! A delicious delight from the local oceans. Shirasu (白子) is the Japanese name for whitebait, little fish that are usually eaten whole. The "don" in shirasu-don means bowl. In the case of dishes like this, it's a bowl of rice. Enoshima is famous for this dish of little fish on rice, and enjoying them raw is a real delicacy of the area.

Just to let you know, you won’t be able to eat the fresh shirasu from January to March, because shirasu fishing is prohibited during this season. However, you can still get cooked shirasu-don during this season, so don’t be disappointed. The little fish are pretty tasty even when they're cooked all the way through.
Other kinds of seafood are also famous on this island, including... 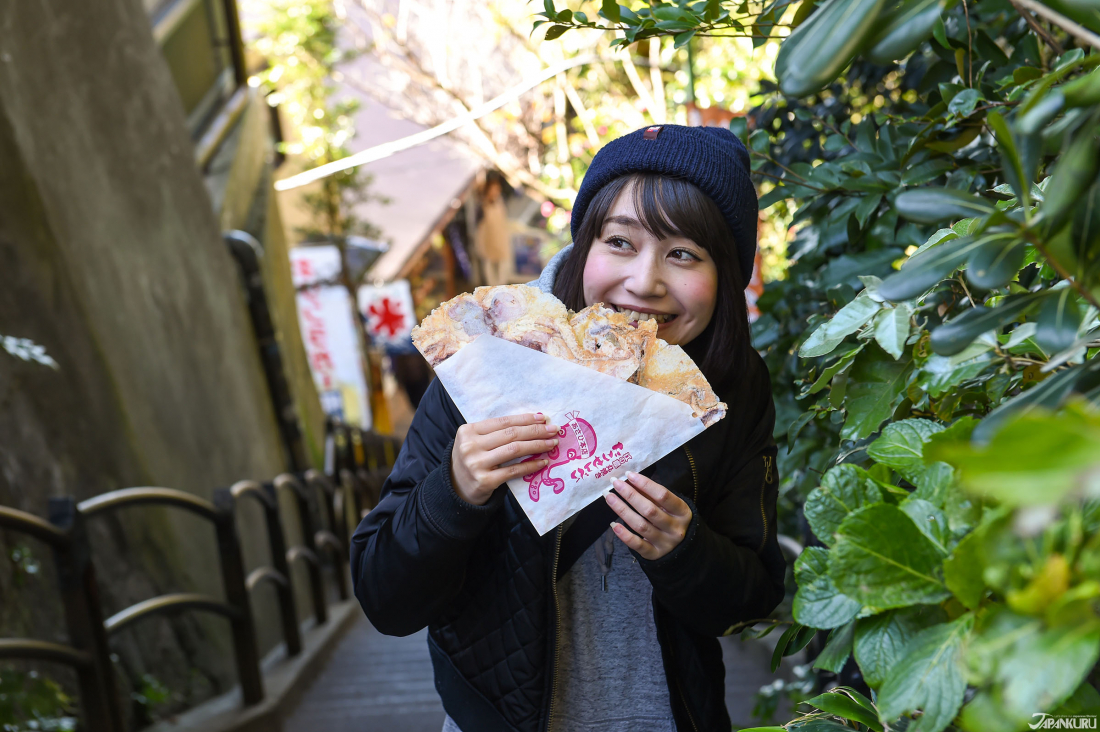 Another snack to try when you get to the island is tako-senbei. Tako means octopus, and you might have already tried "senbei" crackers elsewhere in Japan. (There are stores like this one in Tokyo that sell huge varieties!)
Grab one of these large octopus crackers on the way before your stroll around the island, and enjoy the chewy octopus and crunchy cracker surroundings. (Do make sure you don't end up eating in crowded areas and covering everyone in cracker and octopus crumbs. This has been enough of a problem in recent years that local authorities has set forward official rules about it.)

Hope you liked our recommendations! With all the beaches and hydrangeas, if Enoshima seems like a good place to spend a lot of time, there's plenty more to do.

Take a look at a few of our related posts for more things to do around the area, or more details on places we've already mentioned, to plan your next trip to Kamakura and Enoshima.

Trip to Memorial Spot of Slam Dunk in Enoshima/ Kamakura


Be sure to look out for more exciting articles every day at JAPANKURU!
Or add us on Instagram and Facebook to share your pictures of Japan. 🗾