Japan's autumn leaves are a high point of each year, but do you prefer the fiery red leaves of the Japanese maple, or the soft golden fans of the ginkgo?
Red Maples vs Yellow Ginkgos, An Autumn Battle for the Ages 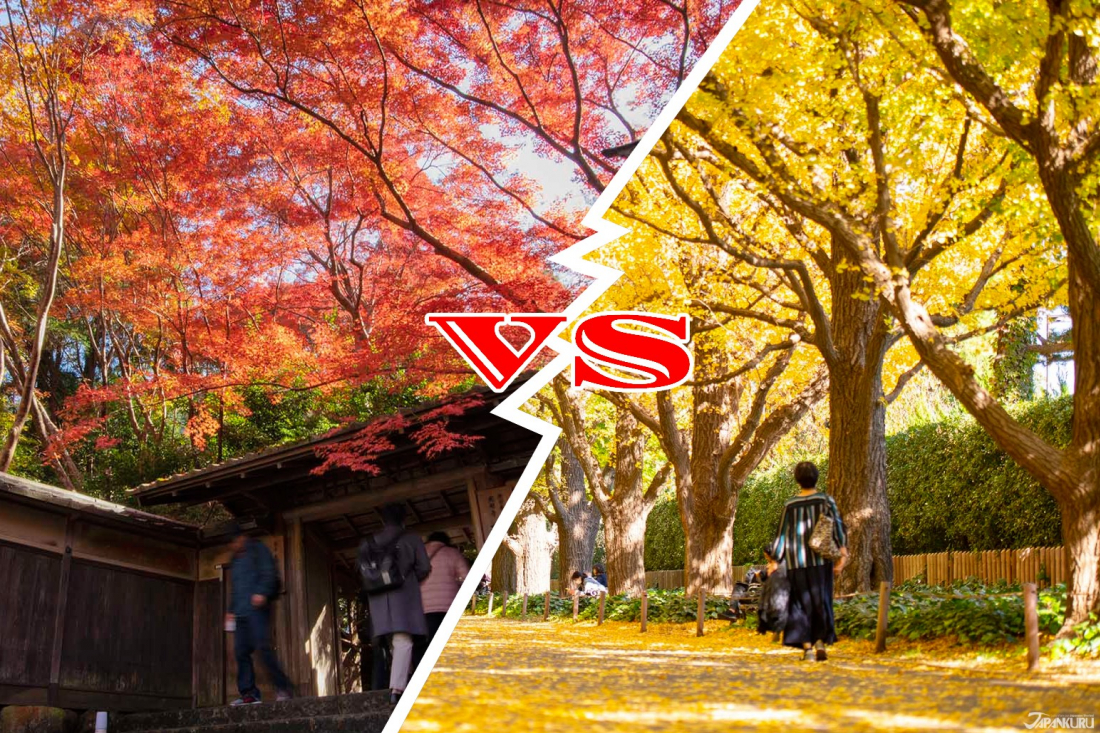 Fall foliage is a symbol of the changing seasons in Japan, making it an important part of Japanese culture when the weather turns breezy and cool each year. Once the trees of Japan start to change color and lose their leaves, travel all over the country becomes focused on one thing: koyo. Koyo, written "紅葉" in Japanese, refers to what some might call "fall colors" in English, and it describes the traditional practice of going out into nature to enjoy the riot of reds, oranges, and yellows that grace tree branches during the autumn season. But despite trees of all kinds and leaves of all shades drawing crowds each year, there is one point of contention: the Japanese kanji for "koyo" (紅葉) can also be read as "momiji," which means Japanese maple. Japanese maples with their vivid red leaves and majestic ginkgos with their fan-shaped leaves in a gentle yellow tone have both been favorites in Japan for centuries on end, but looking at the name, should this ancient Japanese cultural tradition really be restricted to just maple trees? Or should the 300-million-year-old ginkgo tree reign supreme over this old custom? With Japanese maple spots and ginkgo spots still popular today, let's let the two trees battle it out.
Maples ・ Mosaics of Red and Orange 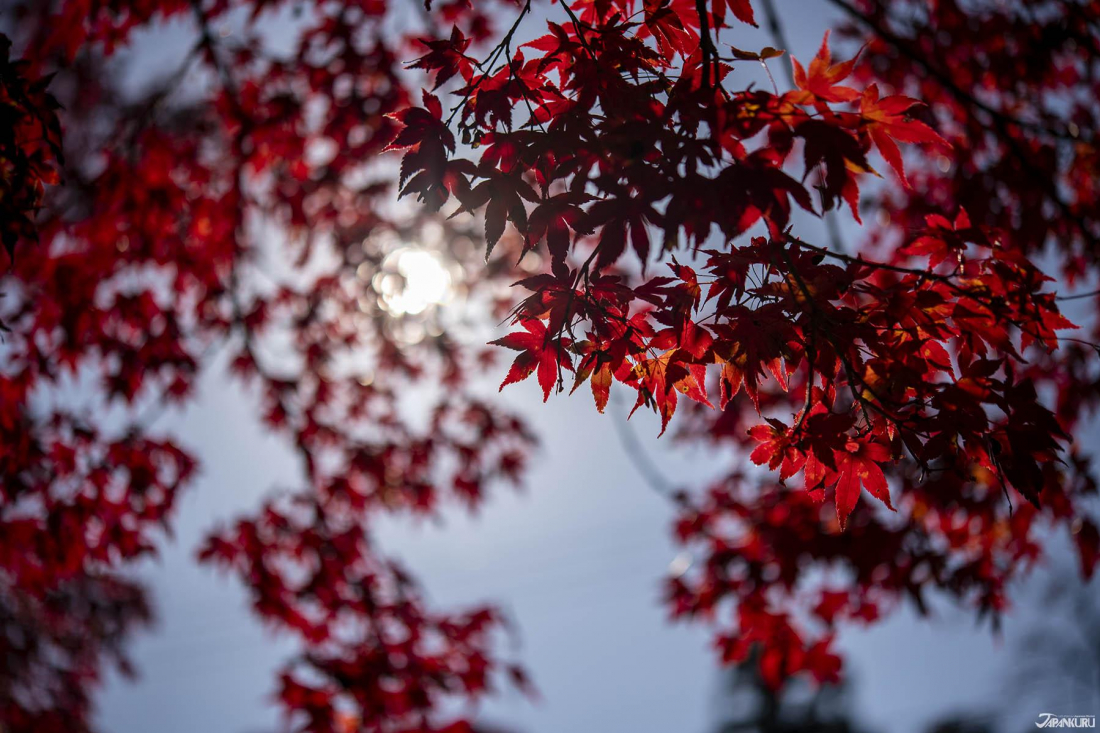 The history of Japan's autumn leaf appreciation dates back to the Heian period (794-1185), when the nobility of Japan leaned into their love of art and nature, and began a number of rather poetic traditions that last to this day - including "momiji-gari" (紅葉狩り), literally "maple hunting." Back in those days, the upper classes would use their ample leisure time to venture away from their landscaped palaces and out into the mountains and wild forests once the weather began to cool, looking for colorful leaves found nowhere else.

The tradition has never really been limited to just Japanese maples, and Japan's forests are full of different kinds of trees with leaves that turn a rainbow of reds, yellows, and browns each year, but the Heian-era "maple hunting" wasn't entirely about hunting with their eyes. It was common in those days for the aristocrats to search for leaves of deep crimson, pick them off the tree, and actually hold the leaves in their hands to better appreciate them. With their spectacular range of reds and oranges, the elegant shape, and the common occurrence around Japan, Japanese maples have become go-to "prey" for fall foliage viewers as this millennium-old noble tradition has become a popular outing for people of all kinds in Japan. Some of the country's most famous fall destinations are popular thanks to the beauty of the local maple trees, with their leaves that turn from vivid green to a gradient of reds and oranges, and fall like burning red stars on the cool moss below. (Of course, these days it's bad manners to pluck leaves from the trees when you go out for koyo, so let's just appreciate the Japanese maples with our eyes and leave the picking to the ancients.) 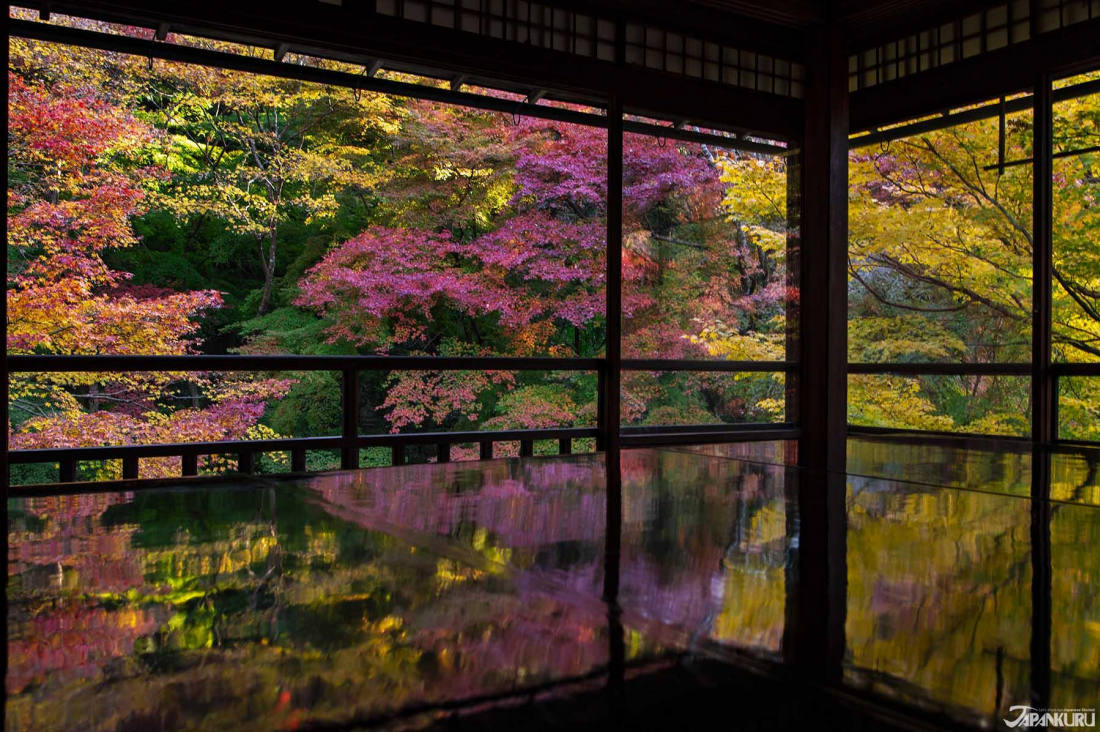 As the home of the Heian court, Kyoto is where Japan's royalty helped to start the momiji-gari tradition, and it's still considered one of the best places in Japan to see spectactular red maples each year. Many of the city's parks and temple gardens are particularly popular in the fall, and Rurikoin Temple is known among them for its beautiful multi-floor temple buildings, and multiple gardens. Lines form when the leaves start to change color, and visitors actually rush INdoors, to feast their eyes on the reflection of the outside trees blurring slightly on the carefully lacquered wooden floor, called "yuka-momiji" (literally "floor maples"). 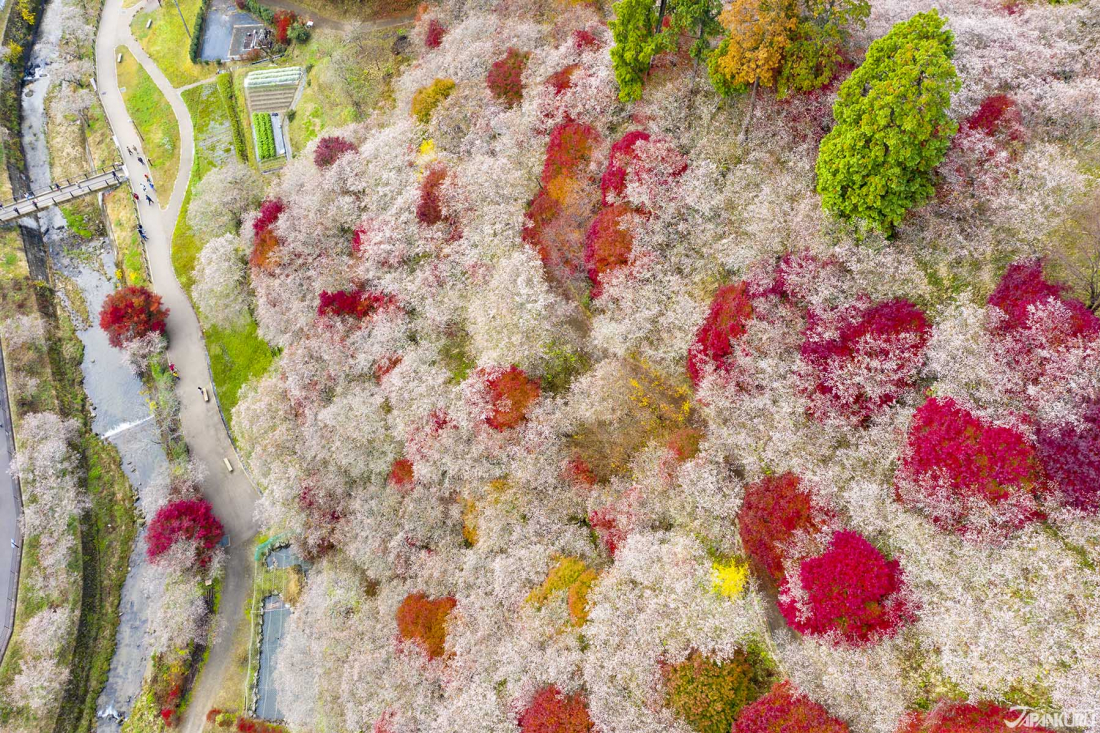 Another unique Japanese maple spot can be found in central Japan, in the city of Toyota (named after the enormous car manufacturer, which was founded locally). Toyota is actually something of a hotspot for koyo, and the mountainside park area of Korankei Gorge is famous for maples that have been grown over the course of almost 400 years by Kojakuji Temple, but the Obara area of the city is also home to groves of maples mixed with shikizakura - cherry blossoms that bloom in the fall. During the Obara Shikizakura Cherry Blossom Festival, the branches of pale pink cherry blossoms and crimson red Japanese maple leaves spill over each other to form a breathtaking natural landscape found nowhere else. 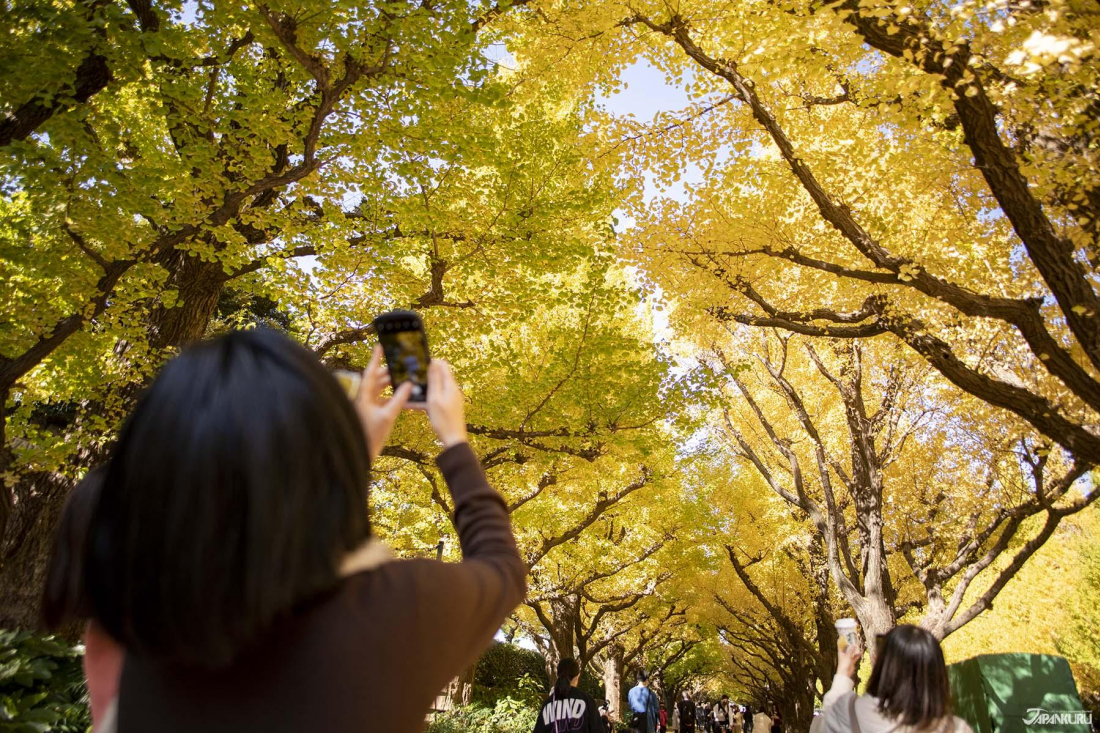 Ginkgos have been growing their fan-shaped leaves and little golden fruits for hundreds of millions of years, earning the title of "living fossil," and the trees are rumored to have first come to Japan from China anywhere from thousands of years ago to the 13th century (although historical evidence suggests they're likely to have arrived en masse in the 15th). Over the centuries, the ginkgo has established its place among Japan's flora and fauna, as locals have found uses for the seeds and leaves, planting the trees in parks and gardens to admire throughout the seasons. Ginkgos actually became a fixture in Japan so quickly that when the German explorer and naturalist Engelbert Kaempfer published his extensive book of Japanese plants in 1712, he featured the trees and established the name "ginkgo" based on the old Japanese name "ginkyo" (銀杏) meaning "silver apricot." (The same word is usually pronounced "icho" in Japan these days.)

Because of the ginkgo's more recent arrival in Japan, the trees are unlikely to be found randomly in the wild, but they do take places of pride in traditional gardens, and are often lined up along broad promenades in Tokyo and around Japan. The canopies grow tall and wide, and it's no surprise that locals and visitors alike will rush to these spots to stroll under the reaching branches as the leaves lose their greenish tint, flutter gracefully through the air, and settle on the ground in a golden carpet each fall. 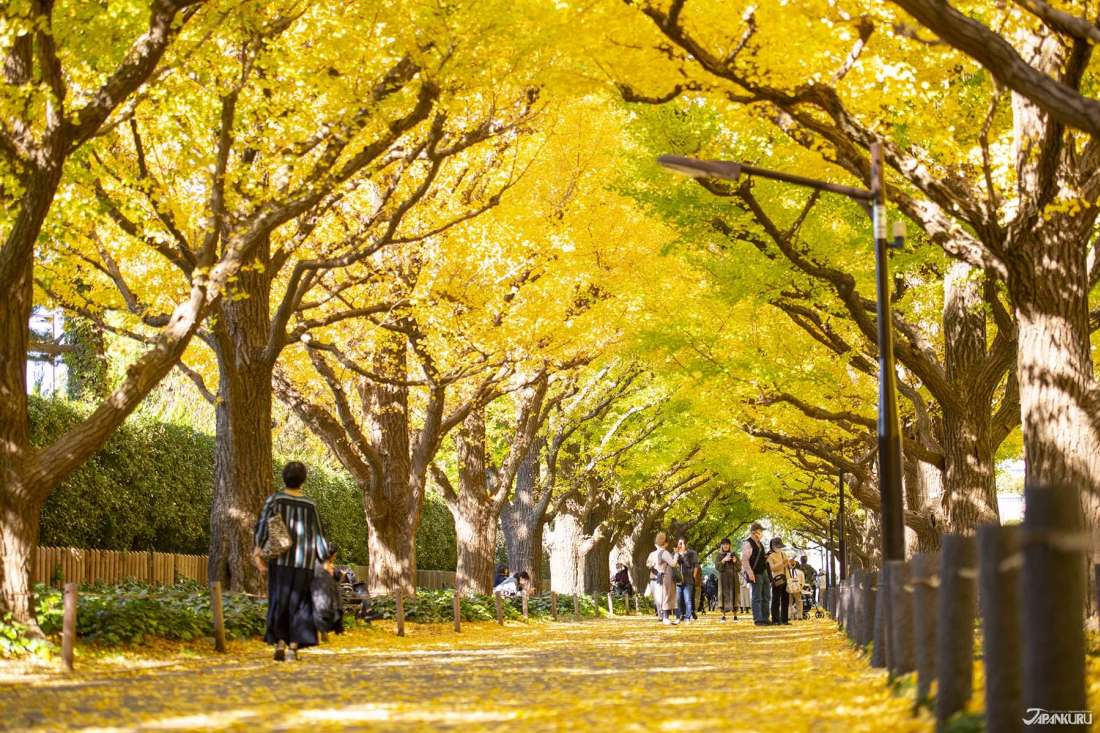 Some of Japan's most majestic ginkgos can be found at Meiji Jingu Gaien, a large park at the center of Tokyo, and home to a museum, sports facilities of all kinds, and even the Japan National Station built for the 2020 Tokyo Olympics. All along the road running through the center of the park, tall ginkgos poke into the sky shaped like huge candle flames, and when the fall weather turns the leaves yellow, each one is like a little drop of sunlight as they tower over the walking paths on each side of the road. During peak koyo season, generally around late November, the park also holds their Jingu Gaien Ginkgo Festival Icho Matsuri (神宮外苑いちょう祭り), so visitors can enjoy the view while snacking on street food from temporary festival stalls. For anyone hoping to fit a little koyo into their busy Tokyo schedule, the park is between the Imperial Palace, Shinjuku Gyoen National Garden, and the famous Meiji Jingu Shrine, so it's easy to squeeze in while you explore the city. 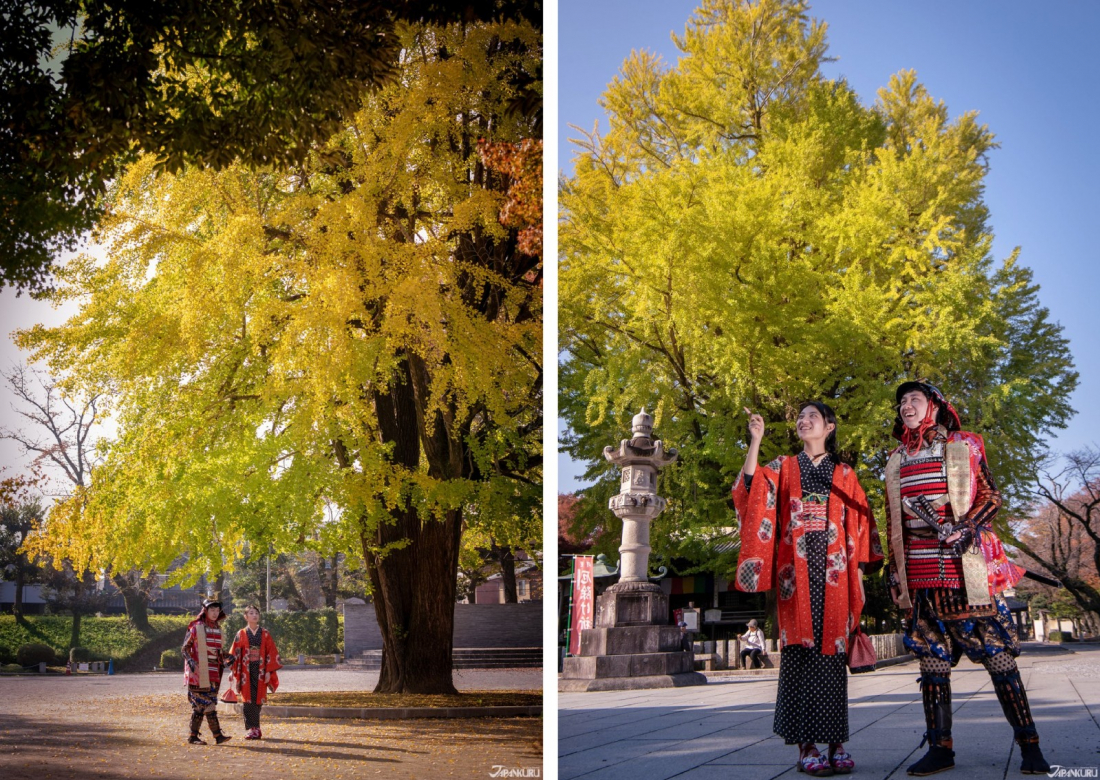 The Ashikaga area of Tochigi Prefecture is usually better known for the fantastic flowers of Ashikaga Flower Park than for any trees, but Ashikaga's Bannaji Temple is a great place to see one of Japan's large, historically important ginkgos. The temple was home to Ashikaga Yoshiyasu, founder of the once-powerful Ashikaga clan, and the grounds within the moat are largely unchanged, including the temple's "giant ginkgo." This tree is said to be over 550 years old, and has even been established as an official natural monument of the prefecture! And when late fall rolls around, the yellow leaves rain down from the highest branches to form a thick yellow blanket below.

Maples may have made their mark on Japan thanks to the aristocrats of Heian-era Japan, but ginkgos have a history of many millions of years. And sunny yellow ginkgo leaves might flutter from the tops of trees arranged elegantly in some of Japan's nicest parks, but maples bring a riot of reds and oranges all over Japan, from forested mountains to quiet temple gardens. Which of these trees offers up a better koyo experience? That's a question much too difficult for us to decide for you! But fortunately, with both trees beautifying destinations up and down Japan, there's really no need to decide on one or the other!

So which kind of koyo will you go see first? Are you all prepared for your outing? No matter what kind of trees you might be searching out this fall, we recommend getting ready with a Japanese thermos full of hot tea and a blanket to lay out over the fallen leaves in case you'd like to take a picnic break while out enjoying the landscape. (We're pretty fond of this adorably autumnal persimmon-patterned blanket from an independent artist on Suzuri.) And don't forget to wrap up warm so you'll be cozy while you're out and about! Will you go for a crimson homespun cashmere scarf to match the Japanese maples, or a mustard yellow made-in-Japan snood to fit in with the ginkgos? If you're a fan of both trees, you can always contrast with this convenient leather tote from Kanmi, made in their local Tokyo workshop, which comes in both yellow and red shades. Dress up in a whole koyo outfit of reds, yellows, oranges, and browns, and you'll be ready to make the most of your outing, whichever colorful leaves you see this year!