Traveling the Nakasendo Trail with Edo Samurai: A Stay in Naraijuku, Nagano Prefecture

Traveling the Nakasendo Trail with Edo Samurai: A Stay in Naraijuku, Nagano Prefecture

Stay a night and just feel the Edo Period history.

If you've ever watched a Japanese historical drama, you might recognize the image of characters traveling the historic main roads of Japan, and stopping to rest each night at one of the "rest stations" along the way.

In reality too, during Japan's Edo Period (1603 – 1868), leaders and important personages often found themselves traveling around between their homes spread across Japan, the ancient capital of Kyoto, and the more recently established capital of Edo (current-day Tokyo). These people traversed Japan using the Edo Five Routes, the major highways of the time, which connected all the major regions to each other. And they needed somewhere to stay during those long journies, didn't they?

One of these paths was the Nakasendo, and along the Nakasendo formed Naraijuku. A rest stop for samurai and other important figures traveling around Nagano (perhaps from the nearby Matsumoto Castle) and around Japan. Recently, the JAPANKURU team stopped by modern-day Nagano Prefecture to take in some of that old-fashioned ambiance, so let us take you back in time with us!

Important Question:
Is Naraijuku (奈良井宿) related to Nara (奈良)? Look at how they're written in Japanese!

The Answer Is:
Nope. 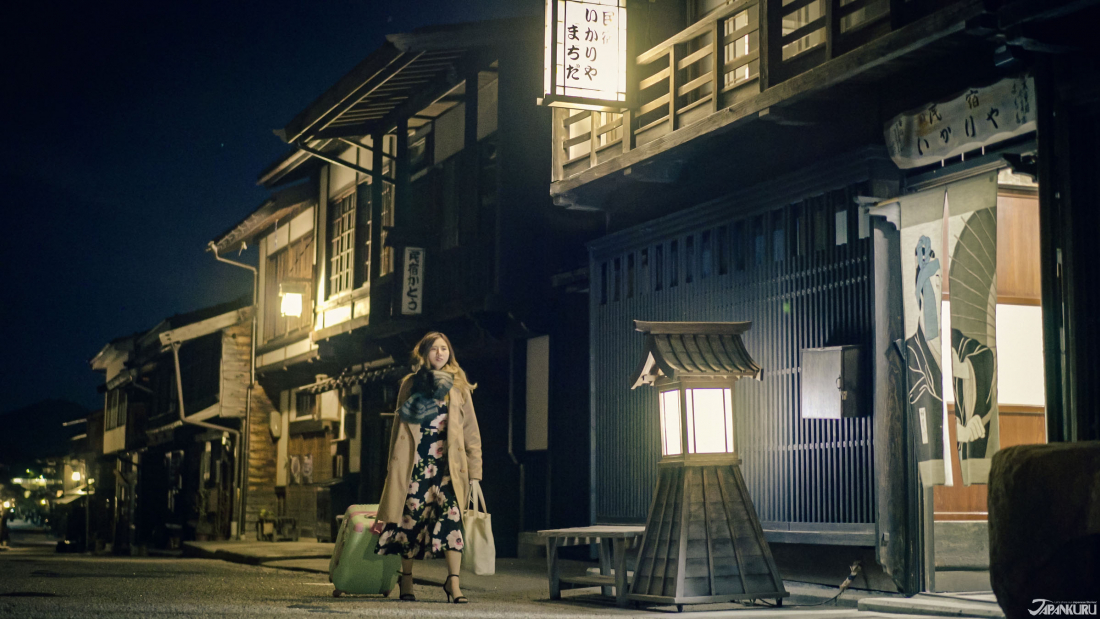 Why so many visitors?

The Edo Five Routes functioned as major travel hubs, but they were also utilized by merchants traveling the country, and were hugely important for Japan's economy. One of the Five Routes was the Nakasendo (中山道, literally the central mountain route). It was frequently used by travelers moving not just locally around Nagano Prefecture, but also between the Tokyo area and Japan's former capital, Kyoto. All the important travelers moving between these major cities gave the road the nickname "Samurai Street". An average journey along the 550 km (340 mile) route took about two weeks to accomplish. Clearly this was no quick excursion, so many "rest stations" (or "shukuba", 宿場) grew up around the Five Routes, becoming towns that catered to the traffic passing through.
Nagano's Naraijuku was one of the 69 stations formed along the Nakasendo route alone, and one of the more prosperous station towns. (If you have sharp eyes, you might have noticed that you can actually see the same Japanese word, meaning a place to stay, as the "juku" in Naraijuku (奈良井宿) and the "shuku" in "shukuba" (宿場). Naraijuku has always been associated with travelers staying the night!)

All the commerce of Edo travelers helped the town to grow, and the profits continued to go towards building new businesses, which eventually resulted in the town earning the nickname "Narai of 1,000 buildings" (Narai senken, or 奈良井千軒). Hotels, restaurants, and small shops are still maintained in some of the original structures from hundreds of years ago, so a walk around Naraijuku probably feels an awful lot like it did back in the Edo Era! It's a rest station through and through, but the tiled roofs and wooden facades that are still found along this chunk of the Nakasendo are enough to make any traditional Japanese architecture lover swoon.

We stayed the night in Ikariya Machida, a traditional guest house providing modern travelers with a place to rest their heads at night. With a dinner of simple, traditionally-prepared Japanese cuisine made by the owner, and a night spent in rooms that smelled pleasantly of tatami mats and wooden walls, we were transported back in time. When we woke up in Naraijuku the next morning, refreshed and free of the fatigue of the road, it wasn't hard to imagine Edo travelers feeling just the same.
Walking down the Nakasendo as it passes through Naraijuku, it's easy to pretend you're an Edo samurai... or maybe an actor playing one on TV. The scenery looks like a set made just for a movie, except all the buildings are real surviving structures! If you want to really get into the spirit, aside from just spending the night and eating a delicious dinner, there are some fun cultural activities you can check out as well.

So, do you feel the old streets and beautiful buildings calling you to Naraijuku yet? We certainly enjoyed our stay there, and thought our whole trip to Nagano was lots of fun. If you want to hear more about our road trip through the beautiful mountainous scenery of the area, check out the article on JAPANKURU's rent-a-car adventure.

Be sure to look out for more exciting articles every day at JAPANKURU!
Or add us on Instagram and Facebook to share your pictures of Japan. 🗾

⇩(And don't forget to check out our video from Naraijuku!)⇩