Fishing and marine life are a deeply ingrained part of the culture in Fukushima's city of Iwaki, still bringing life and color to the seaside city.

The Fish of Iwaki

The City of Iwaki has an interesting history dotted with everything from dinosaurs to coal mining, and even hula dancing, but thanks to the vast warm and cold ocean currents that meet off the coast of Fukushima, life in Iwaki has always been tied to the sea and the fish swimming within. Joban-mono seafood, found throughout the local waters, is serious business for the community, and the daily catch provides a collection of delicacies that make their way into both weeknight family dinners and fine dining. While the March 2011 Tohoku earthquake and tsunami brought changes to the way locals deal with the marine life, from restrictions to increasingly stringent safety testing, even these struggles have never severed the connection that Iwaki has with the ocean.

Travelers curious about local marine life, however, might be interested in seeing what the creatures look like before getting scooped up by fishing boats, and fortunately Aquamarine Fukushima is the perfect place for that! As a first step before diving into the deep end of Iwaki fisheries, the Japankuru team stopped by the aquarium to take a look at the local wildlife.
Aquamarine Fukushima aims to teach visitors all about "the oceans and what they say about our future on earth," by recreating natural environments within the large complex. Of particular note is their area dedicated to the oceans off Fukushima and local marine life. Not only do smaller tanks and informational signs show off some of the region's more iconic creatures, but the aquarium's uniquely-shaped tunnel (an upside-down V) makes it easy to imagine the real Oyashio and Kuroshio ocean currents meeting in the water nearby. Walking through the huge fish tank, visitors find themselves in the space that represents the "shiome" (潮目) meeting point, and both sides of the tank represent different ocean habitats: swift fish power through the Kuroshio waters, and a more diverse cast takes residence in the Oyashio area, all a part of the real Iwaki habitat.

Fishing on the Shores of Fukushima

Despite the beauty of the local aquarium, fish clearly aren't just entertainment in Iwaki. The local fishery business is a major part of life along the seashore in Fukushima, providing work for the community, and food for seafood lovers across the country. The region's seafood is called Joban-mono, and for decades the term has been an immediate sign of high-quality for chefs shopping at Tokyo's Toyosu Fish Market (formerly Tsukiji) and proficient home-cooks throughout Japan. The area has been a reliable and abundant fishing ground for as long as anyone can remember.

But, of course, the 2011 Tohoku earthquake and tsunami brought many changes to Fukushima, the fishing industry included. After we'd found out about the excellent reputation of Joban-mono, the Japankuru team was determined to learn more. We toured our way through local fish markets and testing centers of all kinds, looking for answers concerning safety checks and practicality, but also learning a little more about why Iwaki is so proud of its fisheries in the first place.
What most people know about March 2011 is that a massive earthquake and tsunami hit Fukushima, taking the lives of many local residents and causing real destruction along the way. Neighborhoods were wiped out, and the names of cities along the Fukushima coast were repeated in concerned tones all over the world. Not only that, but the disaster left behind radioactive material, leaving many worried that food produced locally would be dangerous to eat for the foreseeable future. It's easy to see that the whole event left some people, in and outside of Japan, with a vague sense of concern upon hearing the name Fukushima, even today.

What the general public is less aware of, especially in parts of the world far from the shores of Iwaki, is that locals are hard at work restoring local agriculture, including the fishing industry, and doing so at even more stringent safety standards than just about anywhere else. Thanks to the vastness of the open sea, local monitoring centers have plenty of evidence that radiation levels in Fukushima's harbors and fishing grounds balanced out to reasonable levels fairly soon after the earthquake, but safety checks still aren't taken lightly in Iwaki. From seawater and seafloor monitoring, to radiation checks on all varieties of fish caught nearby, Iwaki's local catch is tested and analyzed every single day. It's easy to be skeptical from afar, but Fukushima radiation testing centers of all kinds actually make their data publicly available―they want people to see the numbers for themselves!

The fishers of Iwaki head to work in the small hours of the morning, spending dawn out on small fishing boats floating on the open sea. Some fish are caught in trawl nets skimming the ocean floor, and others are caught using vertical gillnets, and all are brought back to the harbor in time to be sorted and sold at hours that are still early for your average office worker. At Iwaki's Numanouchi Fish Market, sales start at 8:30 in the morning, when wholesale bidders scratch out their prices on slips of paper, and toss them on top of the bins of fresh fish.
Even with the local fishing industry still rebuilding, operating at about 1/3 the capacity of before the earthquake, dozens of varieties of fresh fish and seafood are piled up throughout the open market building every morning, from common favorites to more rare delicacies. Fishermen told us that local katsuo (bonito or skipjack tuna) numbers had been waning due to warming waters, but we still saw plenty of the uniquely striped fish, alongside huge buckets of smaller fish, trays of flounder, and spiny lobsters poking their legs out of their bins of shallow water.

Before all the fish are sold off, though, safety checks take priority above all else. The City of Iwaki has more than one wholesale fish market, and the local testing center is inside Onahama Fish Market, a ways south of Numanouchi. Since fishing boats can bring in slightly different fish every day, the various fish markets are in contact first thing in the morning, to make sure that the testing center tests every single species brought into harbor that day. Even if a fish is so rare that only one is caught, that one fish has to be sent off for safety testing, instead of being sold at market. And while these days the testing shows low radiation levels, in the rare case of numbers even a little bit higher than normal, the fish are immediately recalled and carefully investigated by researchers.
Already reaching the end of a long day of intense ocean fishing by mid-morning, the many fishers and fishmarket workers in Numanouchi and Onahama looked understandably exhausted by the time they were packing up, but when asked about their work they perked up. "At the fish markets in Tokyo they've always said that the freshness of Joban-mono seafood is really top notch," says Iwaki Fisheries Cooperative Association Vice-President Mitsunori Suzuki, a man who has clearly spent his fair share of days in the sun and the sea, "especially our eels, flatfish, greeneyes, and of course katsuo." While he notes that many things have changed since the 2011 Tohoku earthquake, and that they had plenty of trouble directly after the disaster, he adds "these days we carefully monitor all the fish on the spot, so I don't think you'll find safer seafood anywhere in Japan. No other prefecture does such serious testing." Even aside from radiation testing, Suzuki explains that local fishery associations have resolved to use this time of regrowth as an opportunity to improve practices of all kinds, and keep local fisheries sustainable. Going into the future, they now have goals to maintain a balance with the environment as local business grows. "So," the vice-president concludes, "I truly think this is great fish, and we put a lot of work into ensuring its quality and safety before offering it to the public." And finally, with gruff enthusiasm, "please do give Fukushima's fish a try!"

A Taste of Iwaki Cuisine

Finally ready to see what all the fuss was about, the Japankuru team headed to a small restaurant called Shuen Teru (酒縁てる), which serves dishes made with local Iwaki seafood, and pairs them with a collection of sakes brewed around Fukushima. We left the day's menu up to the restaurant's chefs, omakase-style, and received a whole variety of local delicacies prepared in just about every way possible. Starting with sashimi, the plates of thinly sliced hirame (ヒラメ, flounder) and matodai (マトウダイ, called John Dory) were fresh and delicate, and served with a number of sauces: sudachi citrus juice and soy sauce laced with aromatic chrysanthemum and shiso flower petals for the hirame, miso for the matodai. Greeneye is actually the official fish of Iwaki, so we were excited to try it in all kinds of preparations. Deep-fried whole the small fish were flakey and decadent, whereas the ichiyaboshi (一夜干し) salted and dried greeneye had an intensely concentrated umami, made even more delicious when served over ochazuke green tea rice. The locally-caught eel was stewed in a sweet and savory broth, bringing out the sweet flavor of the meat itself, and the final dish took advantage of the unique texture of monkfish skin for a dish with a mouthfeel totally new to our group. It was a true feast of Iwaki cuisine! 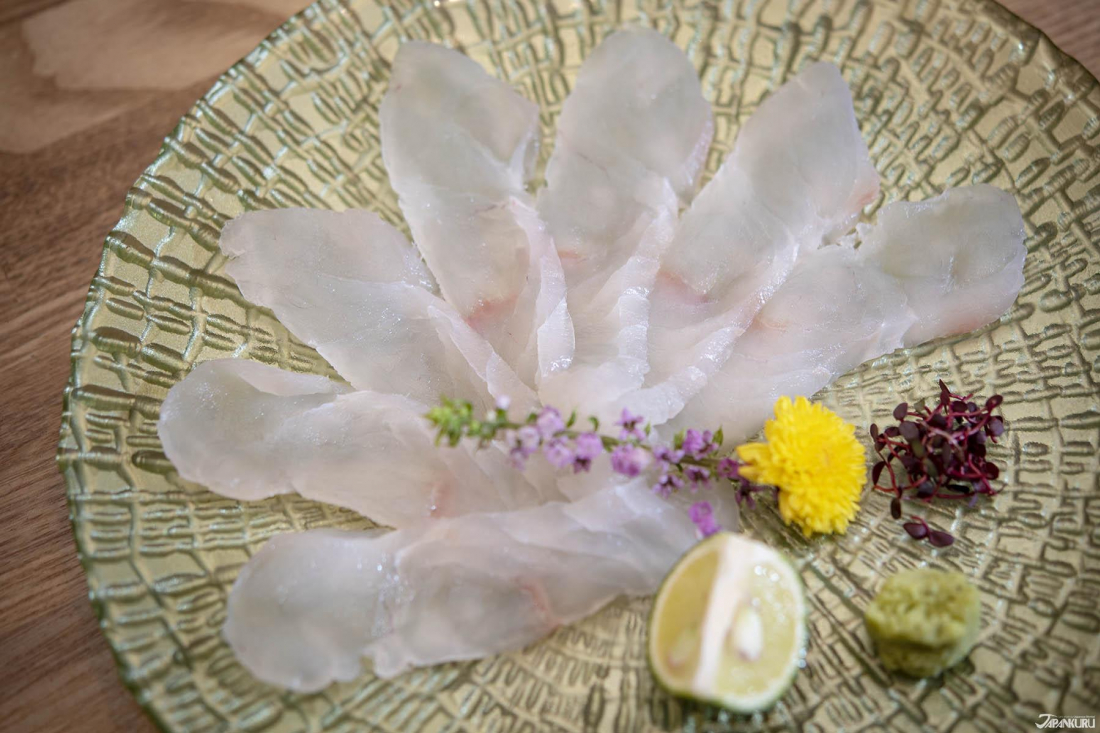 A City of Ocean Views

The long coastline bordering Iwaki has certainly brought the city its share of troubles, but it also brings the community business, great food, and of course beautiful scenery. With every cheery fisher steering their boat back into harbor loaded with fish to sell at market, and every staff member at the many testing facilities preparing samples and carefully charting data to make sure the fish is safe to eat, it's clear to see that the citizens of Iwaki are working hard to keep the industry alive, and share their love of Joban-mono with everyone they can.

For more on the seafood of Fukushima, and many more details on the ins and outs of Fukushima's ocean monitoring and seafood testing, keep an eye out for more Joban-mono articles coming soon! And if you'd like more updates and info from Japan, follow us on twitter, instagram, and facebook!