Maiko in Kyoto - A Traditional Culture Struggling in a Modern World

Maiko in Kyoto - A Traditional Culture Struggling in a Modern World

Geisha: A Mainstay of Kyoto That's in Risk of Being Lost
Kyoto, the traditional capital of Japan, whose name even means capital.
With this it is home to a number of traditional cultural points, with maybe one of the most famous being Geisha. In Japanese, these performers are known as Maiko (舞妓 まいこ) and Geiko (芸子 げいこ) and can be found wandering around the old capital as well as performing at restaurants doing Ozashiki Asobi.
Maiko can be found all over the capital, on walks between training sessions, or even just in their free time. Dressed in either beautiful Yukatas in Summer or gorgeous Kimonos in Winter, they are painted with a white as snow makeup, heralding back to a time where heavy white makeup would be used to have it reflect better in the candlelight at performances. Even with modern lighting, the culture hasn't changed, and it has led to both intrigue and misconceptions, of thinking that geisha use white makeup to appear westerner, which is quite far from the truth.
With all the kimonos and yukatas, and belts and accessories costing a lot, it normally falls to the house that they live at to provide everything to in training Maiko. With this many of the different kimonos and yukatas have a very unique look, all the while being gorgeous to look at. 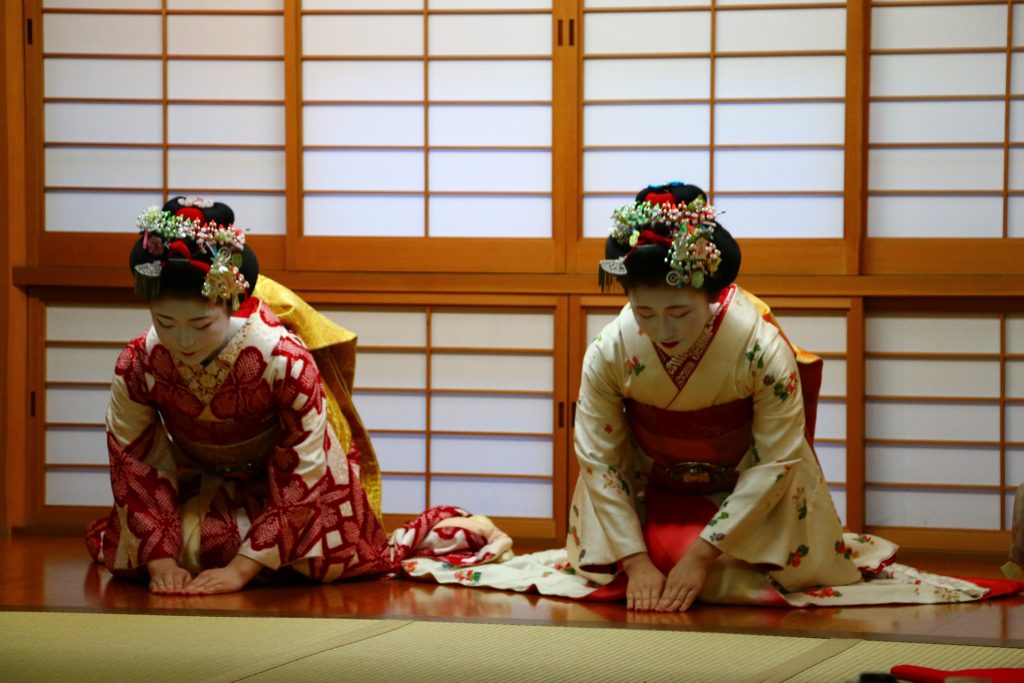 Numbers of Maiko and Geiko are Decreasing!

With such a hard path to follow through with, the numbers of Japanese girls becoming Maiko and Geiko have drastically decreased over the past decade. From its peak in 1925 of 1929 Maiko and Geiko living in Kyoto to the current number of 260 (80 Maiko and 180 Geiko), the number of Geiko in Kyoto are slowly in decline.
What's more the training to become a Geiko is intensive. Girls that wish to be Geiko after being a Maiko in Kyoto have to follow an amazing tough regime which can last up to 6 years. They have to focus on learning the shamisen, a traditional type of guitar, intricate dances, and Kyoto Dialect. By doing so they are able to make the step up to Geiko. On top of this training, the girls that wish to become Geiko, enter knowing that they won't be allowed to use mobile phones, or to watch TV or be a part of the digital age. They do this as they feel that being a Maiko is an amazing opportunity and lets them become part of a age old tradition.

Ozashiki Asobi (お座敷遊び おざしきあそび) is a tradition were the Maiko and Geiko entertain guests with music and dances as well as talking with the guests. While the name is the name of a game played during these parties, the whole dinner is also known as such. With drinks and food flowing, it is a great way to learn about Maiko and Geiko culture in a rather relaxed fashion. What's more each session lasts about 2 to 2 and a half hours which means you have plenty of time to talk to a Maiko!
By getting this chance to talk in a relaxed manner with these beautiful Maiko and Geiko, it is an opportunity to learn about them and the age-old traditional culture!

Geisha Japan & Maiko Club - Helping to bring Geisha Culture to Everyone All Around the World!

Geisha Japan and Maiko Club was made with the idea to allow for many people to enjoy the culture of the Hanamachi (or Kagai to locals) area , in particular the Maiko culture, and to allow people from all over.

With this, a large community has slowly grown, but with this many different opinions have been heard such as:

[I would love to join one of your events in the future!]

[I'll be in Kyoto in the near future, but where should I go to meet Maiko?]

[I can't speak Japanese but I would love to join in with Ozashiki Asobi!]

After seeing these comments, the team running the community realised that the amount of people that are visiting Kyoto already have a large interest in Japanese culture, and they wish to be able to not just learn about this culture but also be able to participate in it.

However, at the moment with the culture of refusing first timers to the many different shops, it's hard for Japanese and even harder for foreigners to experience the area. So partnering with different Maiko establishments, they started to look at helping bring first timers to watch these amazing performances.

Crowdfunding for a More Secure Future

Right now, one of the biggest bases for Geisha culture in Kyoto is looking toward crowdfunding to help open up this culture to the rest of the world! With the project it looks to raise money to bring in English speaking staff, and through this allowing for foreigners coming into Kyoto to be able view these amazing banquets and participate. It will also allow for us to be able to expand and create a base among foreigners to is able to support and cheer on the girls that give there childhood to carry on this beautiful art.

The crowdfunding project can be found at https://en.japankurufunding.com/projects/maiko-club