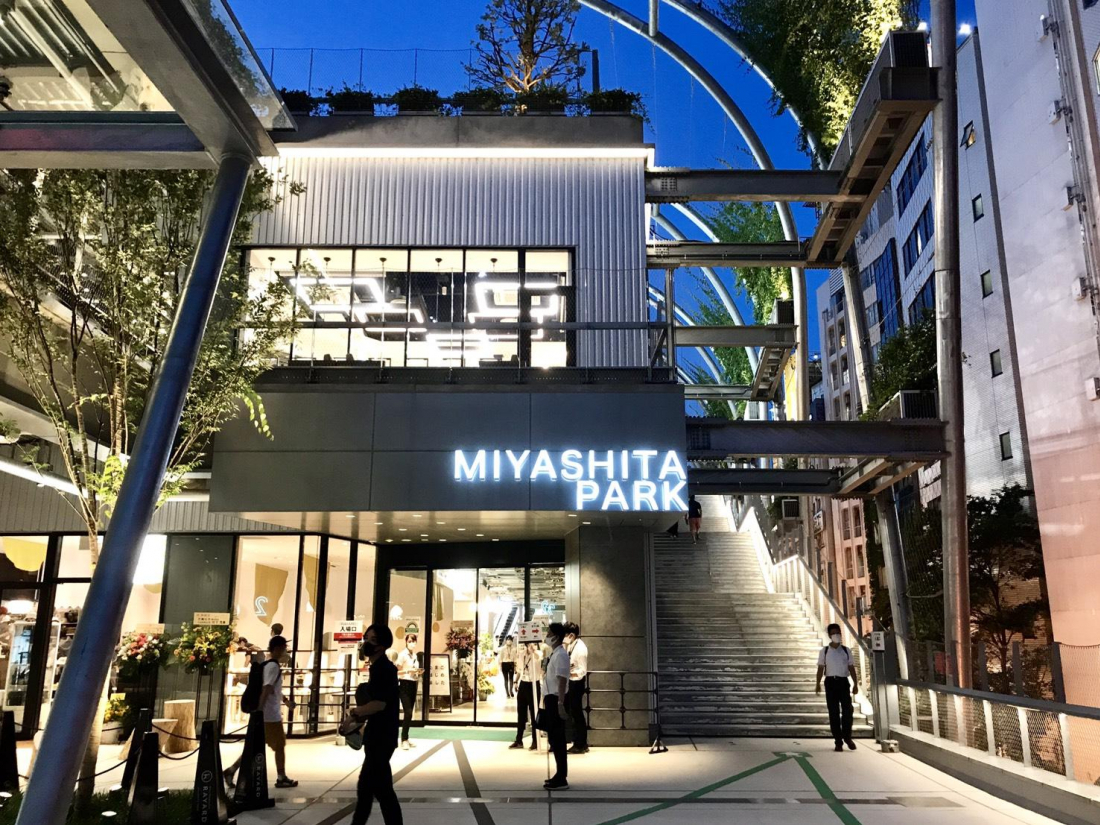 Miyashita Park was once a fairly nondescript public park, with a few trees doing their best to survive when surrounded on all sides by the concrete, glass, and endless crowds of Shibuya. But a total overhaul has turned the space into a brand new shopping facility, with designer brands, bookstore cafes, trendy gift shops, and a pretty wide variety of food options. And the park hasn't disappeared, eitherーyou'll find it on the roof!

Recently, the Japankuru team has been taking a look at the many shopping facilities that were slated to open just before the 2020 Tokyo Olympics (...before the games were postponed), like Tokyo Mizumachi between Asakusa and Skytree, and Waters Takeshiba off of Tokyo Bay. So, with rumors of new limited-edition Ghibli merchandise and fresh city-center greenspaces floating around the internet, we headed over to check it out!

For the time being, entrance to Miyashita Park is limited to a certain number of people per day, controlled by a reservation/numbered ticket system. So we had our reservation checked, our hands sprayed with disinfectant, and our temperature taken before heading in. First things first, we wanted to see what makes Miyashita Park so uniqueーthe rooftop park space! 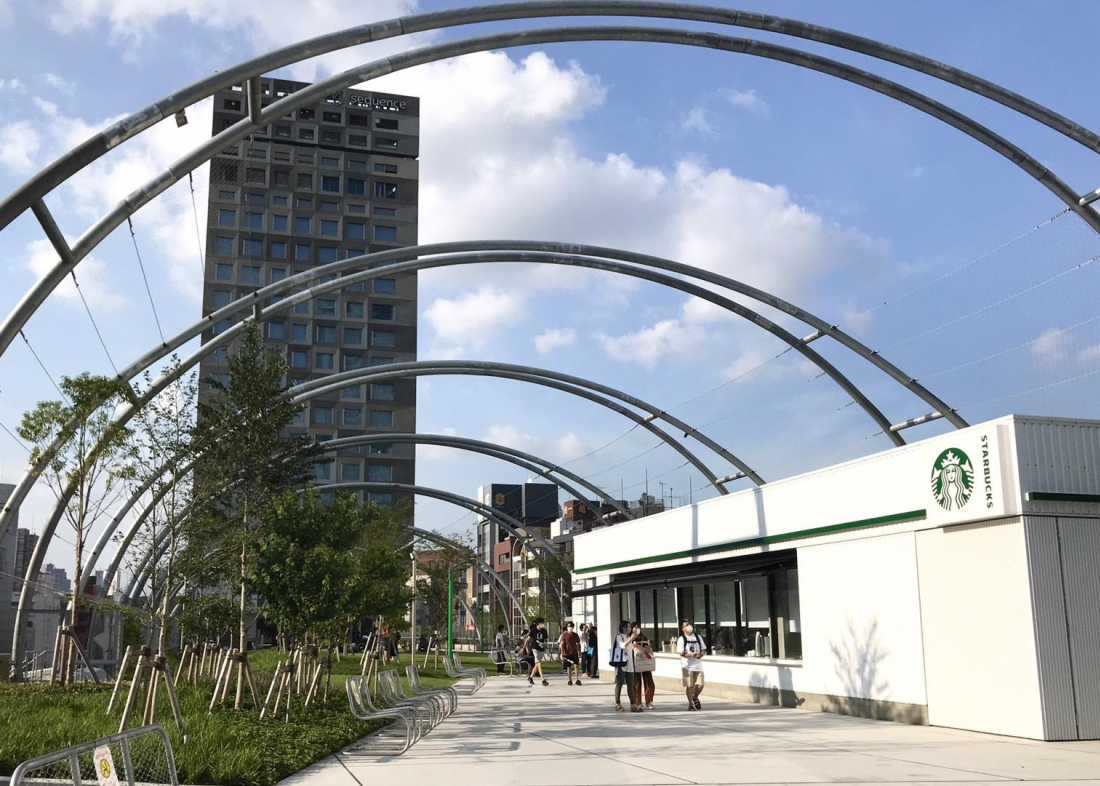 The limited number of people on the premises meant the roof was uncrowded, but we could immediately tell that once the limits were removed, it would be packed for years to come. In every direction there were grassy lawns to spread out on, benches and seating where shoppers could plop down, and views of the Shibuya surroundings. In the background here you can see the Sequence Hotel, a newly built facility in a pretty unbeatable central-Shibuya location, attached to the Miyashita Park complex.

And we have no doubt that lines will run out the door at that Starbucks, with people waiting to get a drink and relax in the sun.

The roof also hosts a few other facilities, accessible for surprisingly reasonable prices, for the most part. While the "Multi-Purpose Exercise Facility" has a sandy lot for beach volleyball that can be rented for upwards of 6,500 yen an hour, adults can use the bouldering wall or the skatepark for just 500 yen for 2 hours. 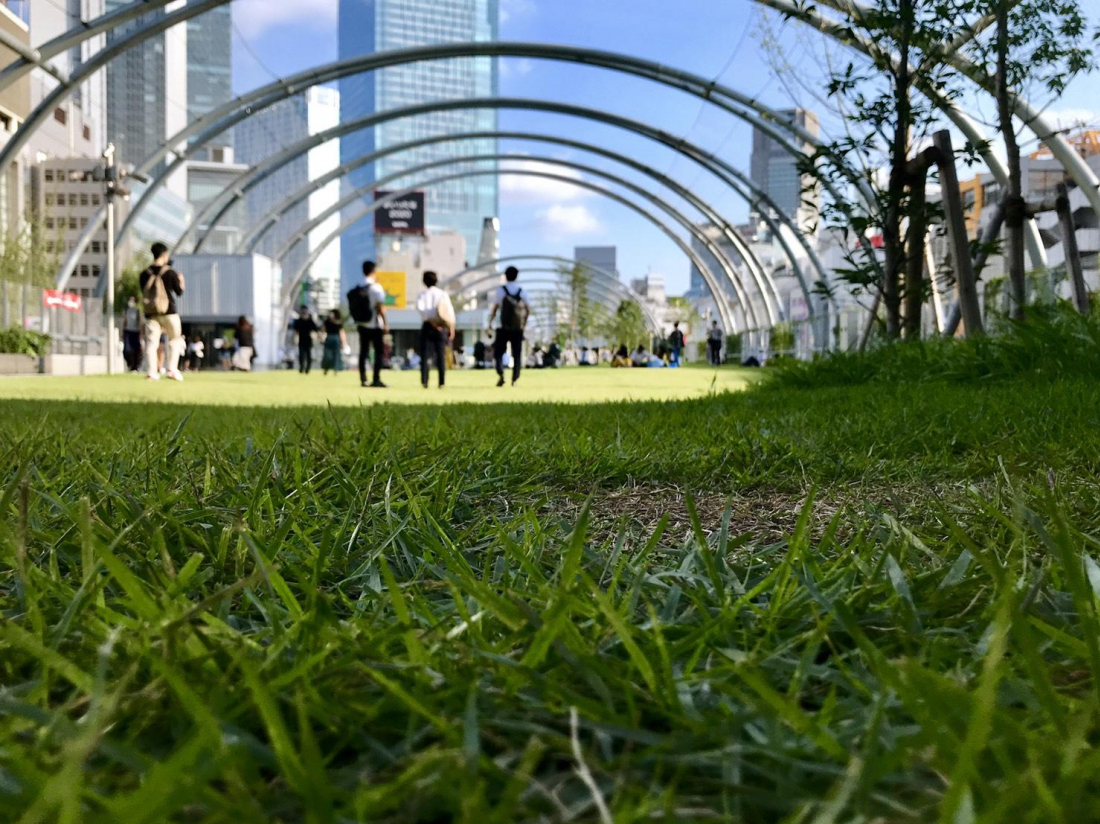 Even in the hot summer sun, on what Japan traditionally calls the hottest day of the year, the warm grass was an inviting place to take a break. 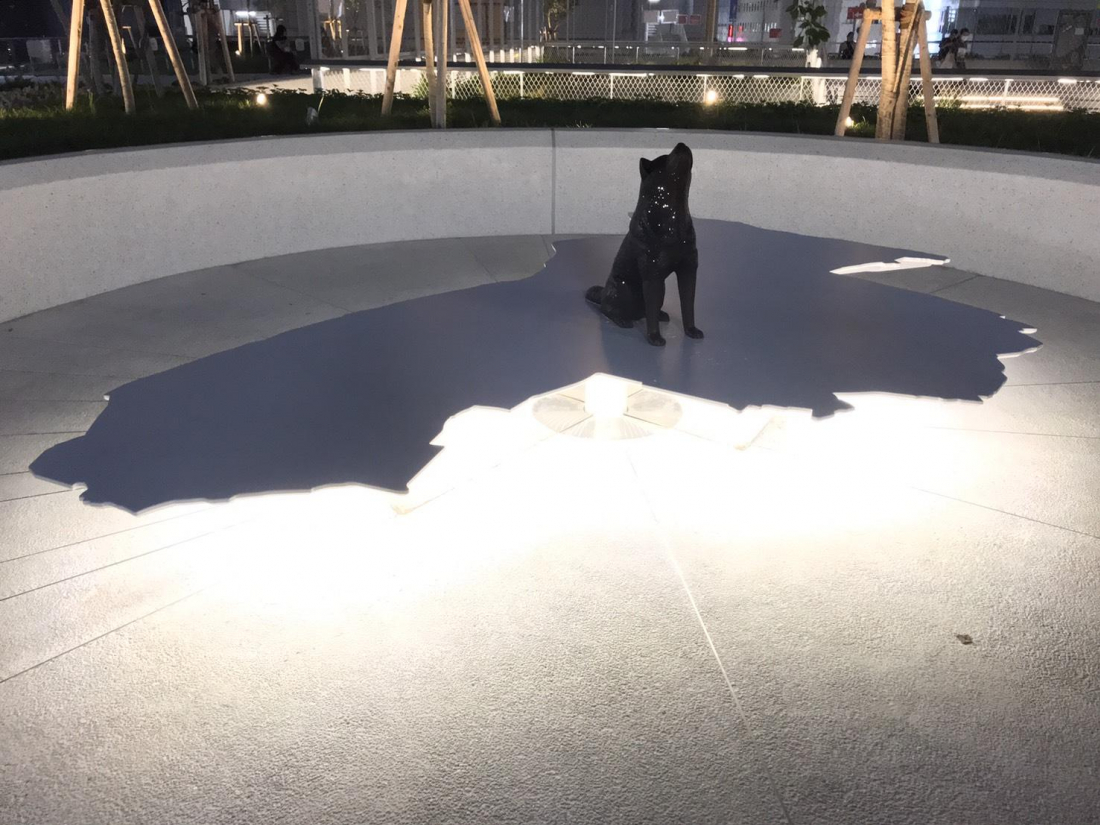 Miyashita Park also has its very own Hachiko statue, which lights up at night!
Shopping 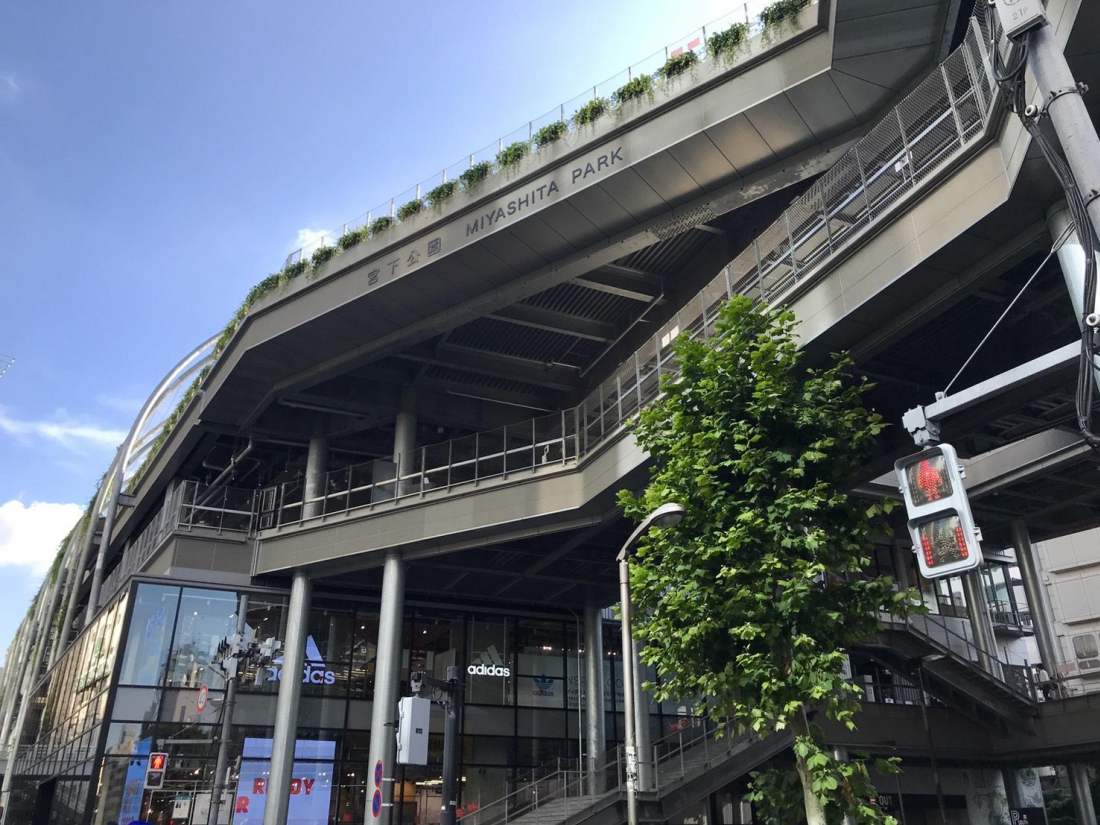 Under the rooftop park, Miyashita Park has three floors of shopping and eating, divided into north and south sections (with a street running right through the middle). Much of the shopping leans high-end, with Coach and Louis Vuitton setting up shop with multi-floor locations on the north side of the building. Aside from designers, the mall has a handful of less outrageously expensive clothing stores (including a huge Adidas shop), and is replete with what Japan calls "zakka" (雑貨 - what we might call variety goods or giftshops in English). There are a lot of shops selling a mix of lifestyle goods, homewares, and stationary, but all with unique style (and lots of it). There were quite a few shops that caught our eye, but here are just a few of the highlights. 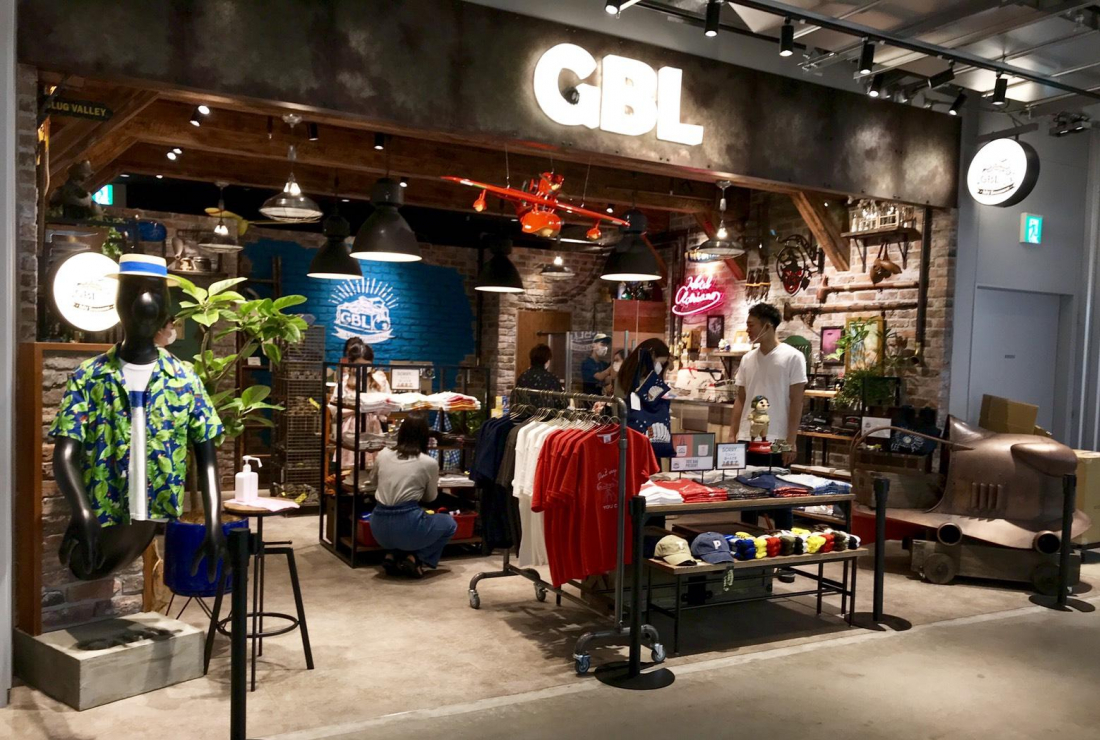 In 2016, Ghibli started the new brand GBL, releasing products a little unlike all of the Studio Ghibli merchandise available up till then. While shops around Japan sell Ghibli toys, homegoods, and other gifts, GBL offers a new take on the Ghibli image, selling what they call "American casual" clothing. This shop in Miyashita Park is the brand's first ever physical location!

GBL's main line of products is Ghibli t-shirts, but the shirts are made of thick high-quality fabric, and ornamented with trendy Ghibli-inspired screenprints and embroidery. They've also got a variety of accessories and miscellaneous gift items, many of which are found at no other Ghibli merchandise shops. As big Ghibli fans, we probably spent a little too long at GBL oohing and aahing over the shop's goods, and the richly decorated walls. 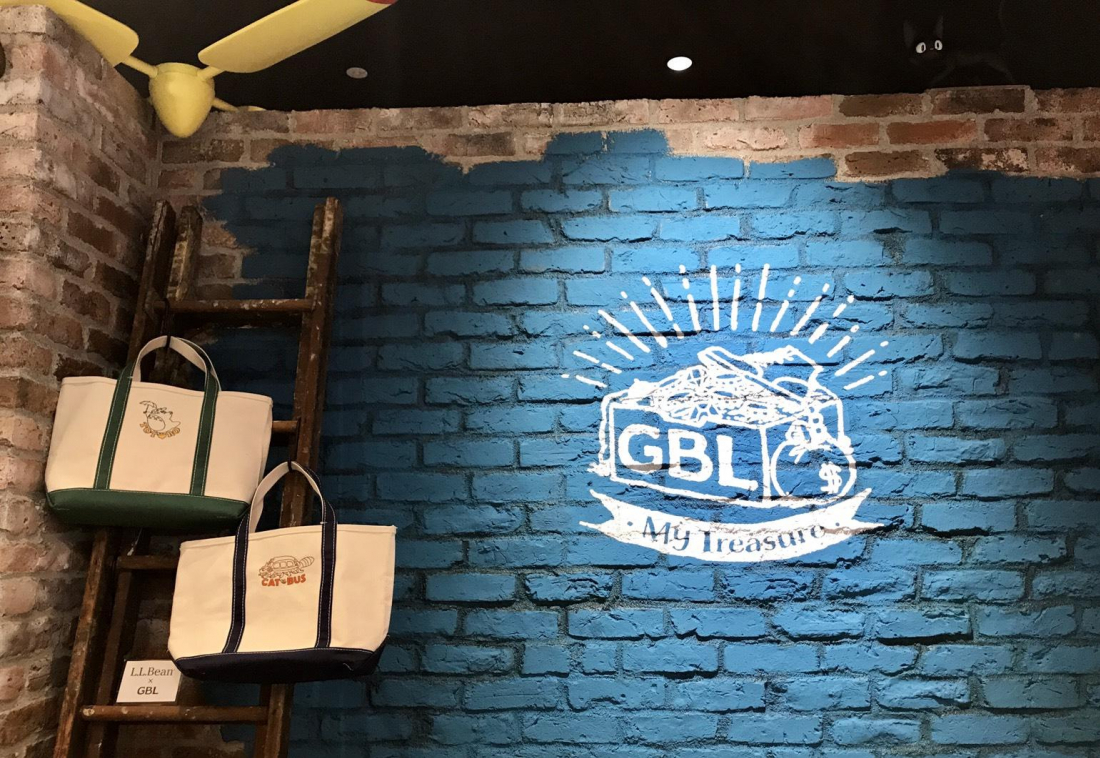 Keep an eye out, in every direction, for fun Ghibli easter eggs around the shop. 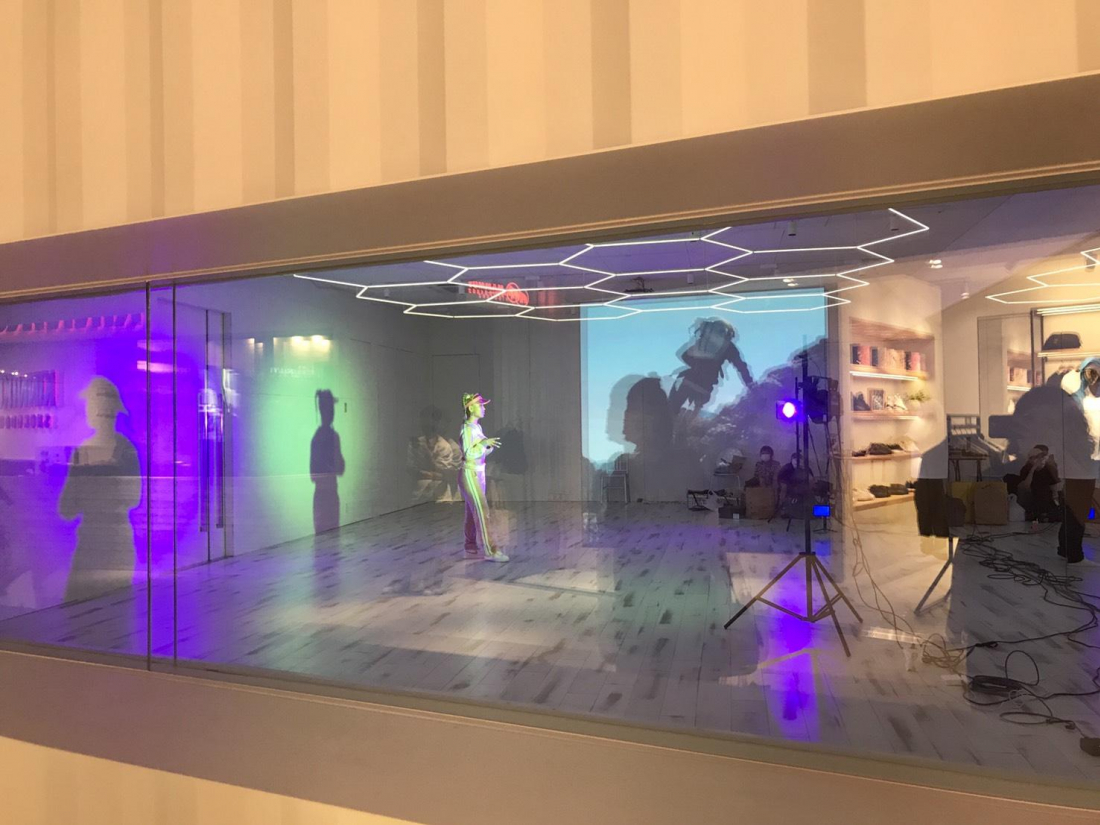 On the same floor is En Studio, where we happened to see some pretty intense choreography getting recorded. 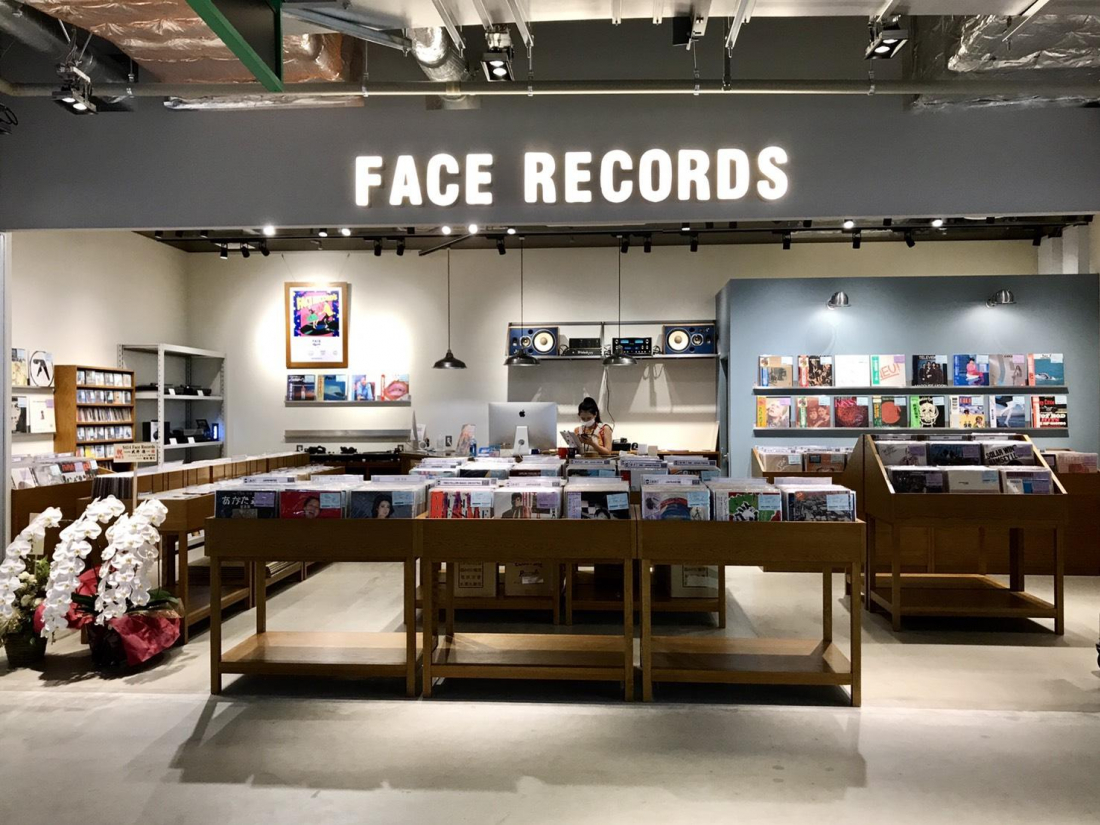 Right nextdoor to GBL, we were totally charmed by Face Records, which not only sells a variety of vintage records (check out the city pop!), but also some CDs and record players as well. 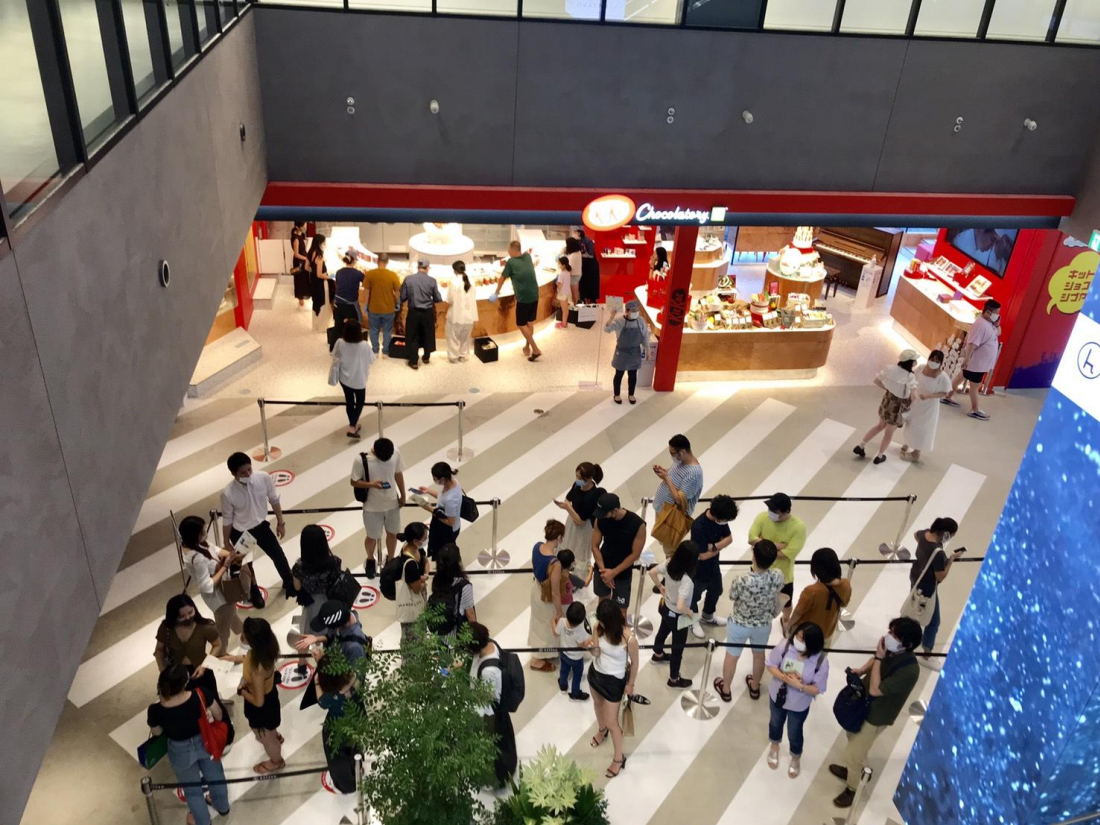 Looking down onto the second floor we assumed this line was for the Kit Kat Chocolatory, which offers a custom Kit Kat making experience to a limited number of customers each day, but it turns out it was actually for Jamba Juice (!?), which is offering a special blue smoothie only available at Miyashita Park. 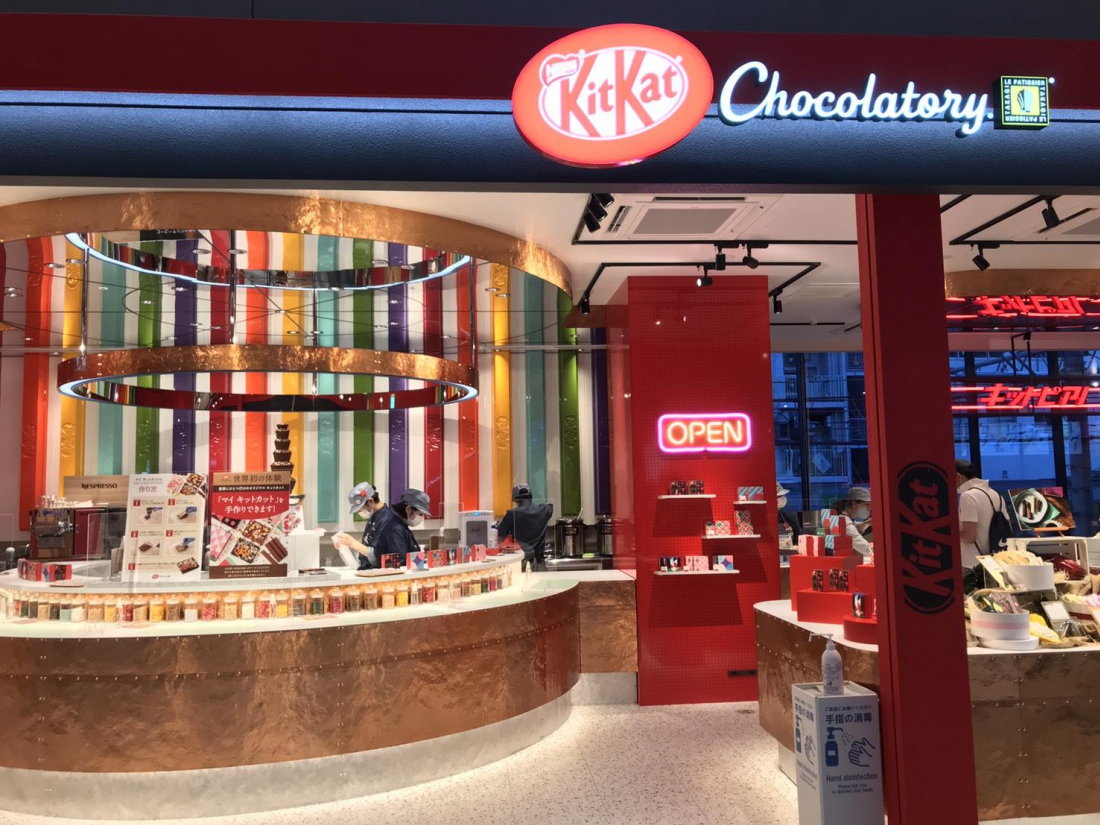 The Kit Kat store, on the other hand, was selling a variety of gourmet Kit Kats, and some items like Kit Kat ice cream sundaes that could be eaten in-store. Between us, the Japankuru team ended up taking quite a few Kit Kats home, like cacao fruit flavor (it was the fruitiest chocolate you could imagine!), and a handful of Kit Kats packaged in boxes illustrated by the popular Misaki Tanaka. 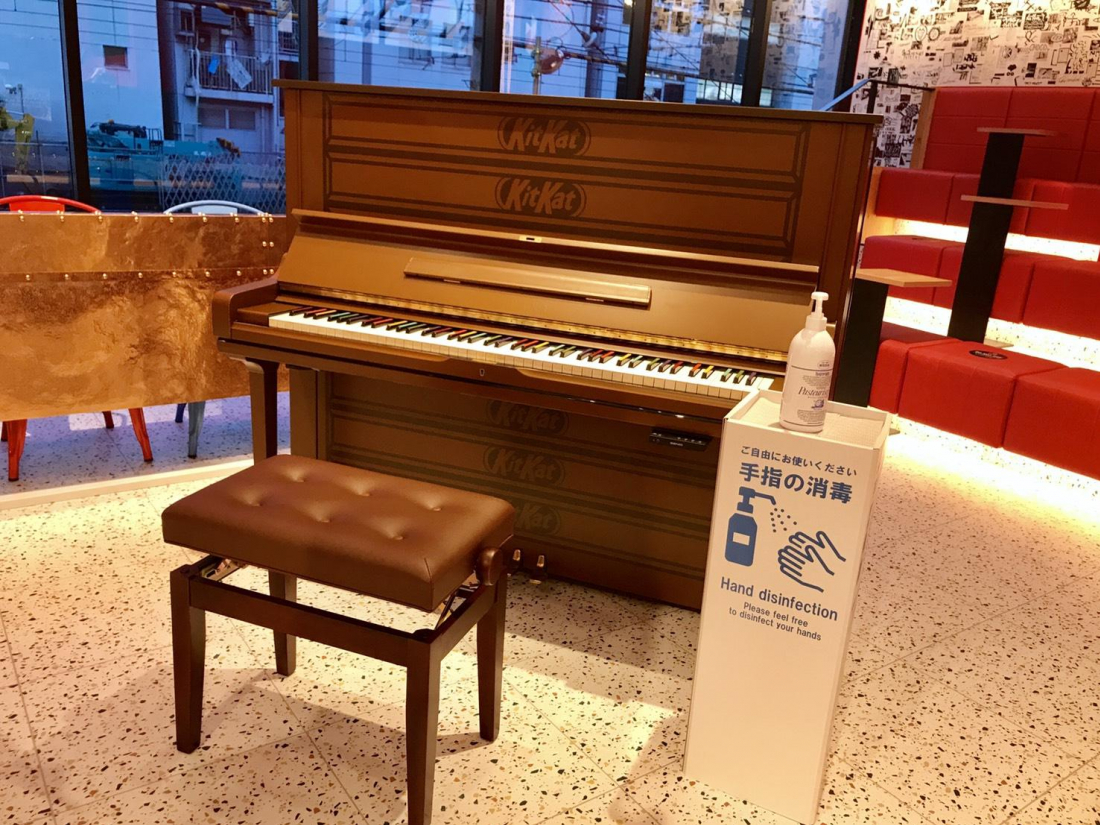 Plus, there's a Kit Kat piano. 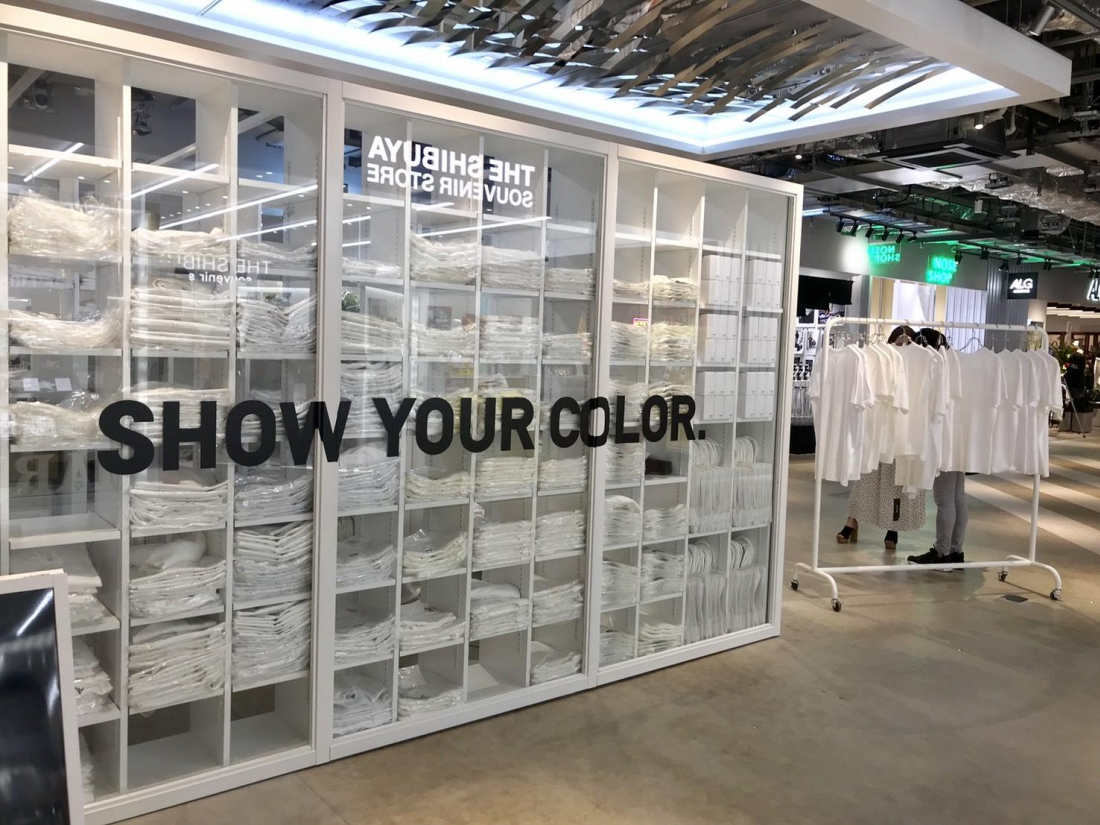 Nearby is this crazy pop-up shop, #FFFFFFT.zip,  selling only white t-shirts. Just dozens of different kinds of white t-shirts from different brands, many of which were made specifically in collaboration with this store.

The south area of the second floor is generally a good destination for those in search of souvenirs, since in addition to rare Kit Kats, you can also pick up a variety of unique items from kiosks set up along the hall. The area is also home to a shop literally called "The Shibuya Souvenir Store", which sells Tokyo souvenirs (and a surprising number of Demon Slayer: Kimetsu no Yaiba items, too). 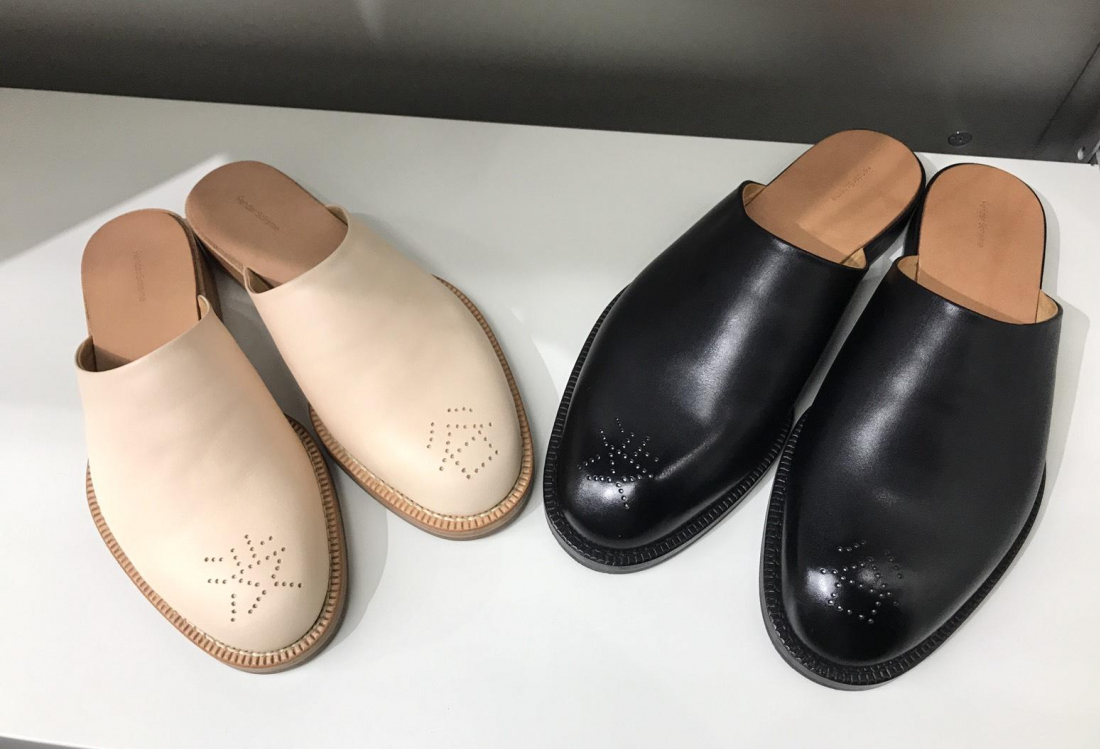 The kanji on these shoes reads "Shibuya" in Japanese (渋谷), but you won't find them at the Shibuya Souvenir Store! We actually saw them for sale at luxury leather goods shop Sukima, on the other end of the second floor. 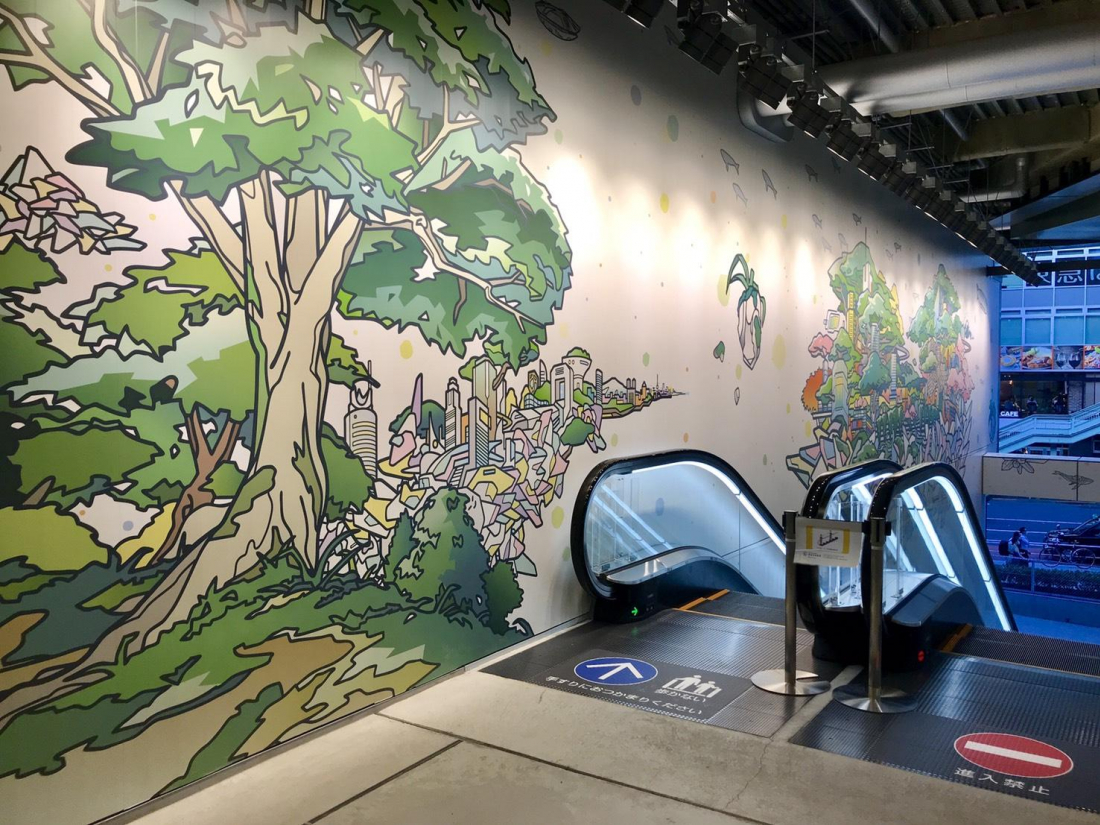 We headed down to the ground floor for one last shopping stop... 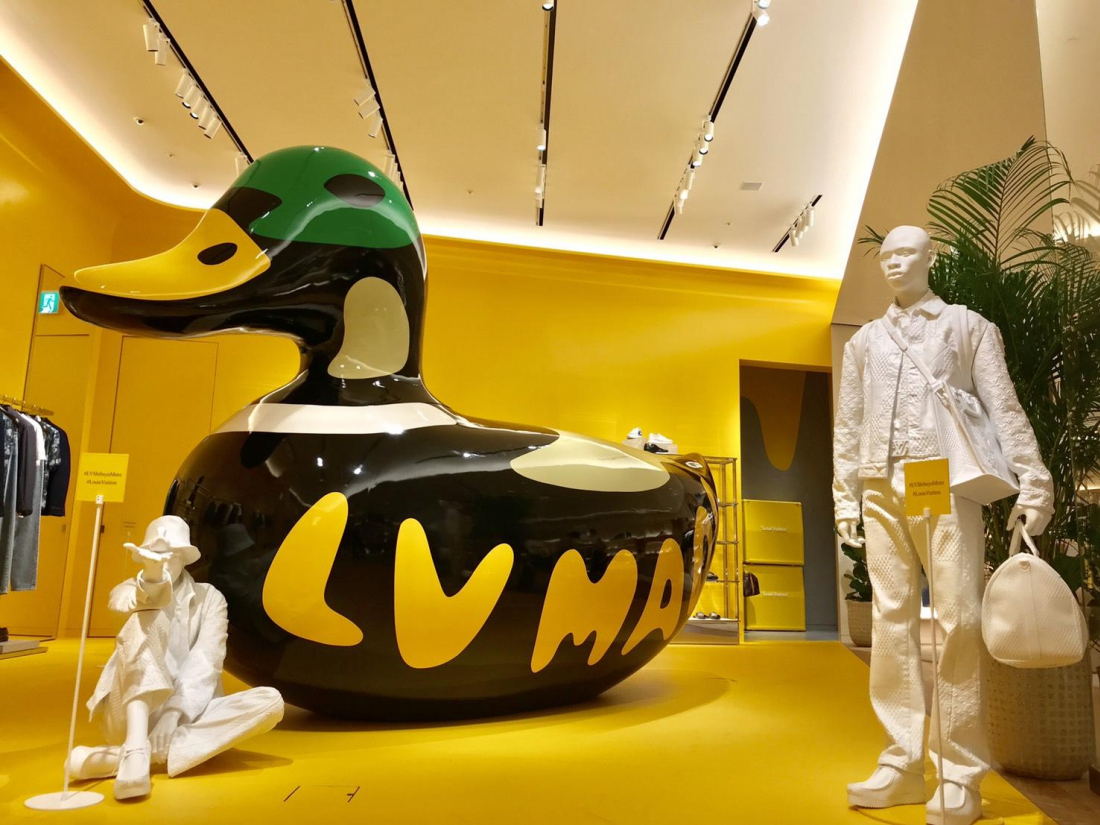 We had no intention of buying anything at the new Louis Vuitton men's store, which was probably clear to the many shop staff milling around the store. Fortunately, they were all very nice and not at all snooty, and we were appropriately impressed by the enormous duck gracing the shop floor. The duck is promoting the LV MADE line, produced in collaboration with Bape designer Nigo, and there were signs advertising the project all the way between Shibuya Station and Miyashita Park!
Food 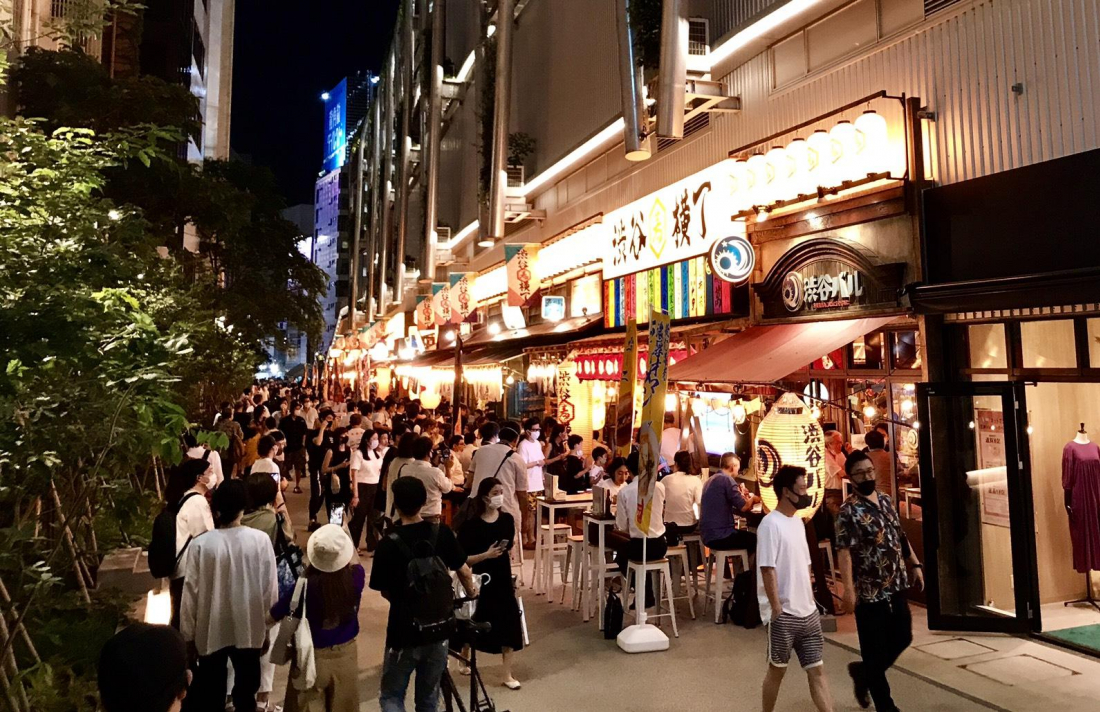 Having spent hours lounging on the grass, exploring the shops, and buying Kit Kats, we were ready to eat. The food selection really shines at Miyashita Park, with options for just about everyone, whether you're looking for a snack at a cafe, some cheap fast food, or a proper sit-down restaurant.

One of the food hotspots is the south area of the first floor, which is taken up by the "Shibuya Yokocho" (渋谷横丁, "Shibuya Alley"). The 19 different compact eateries offer different options, mostly regional Japanese food and a couple other Asian cuisines. 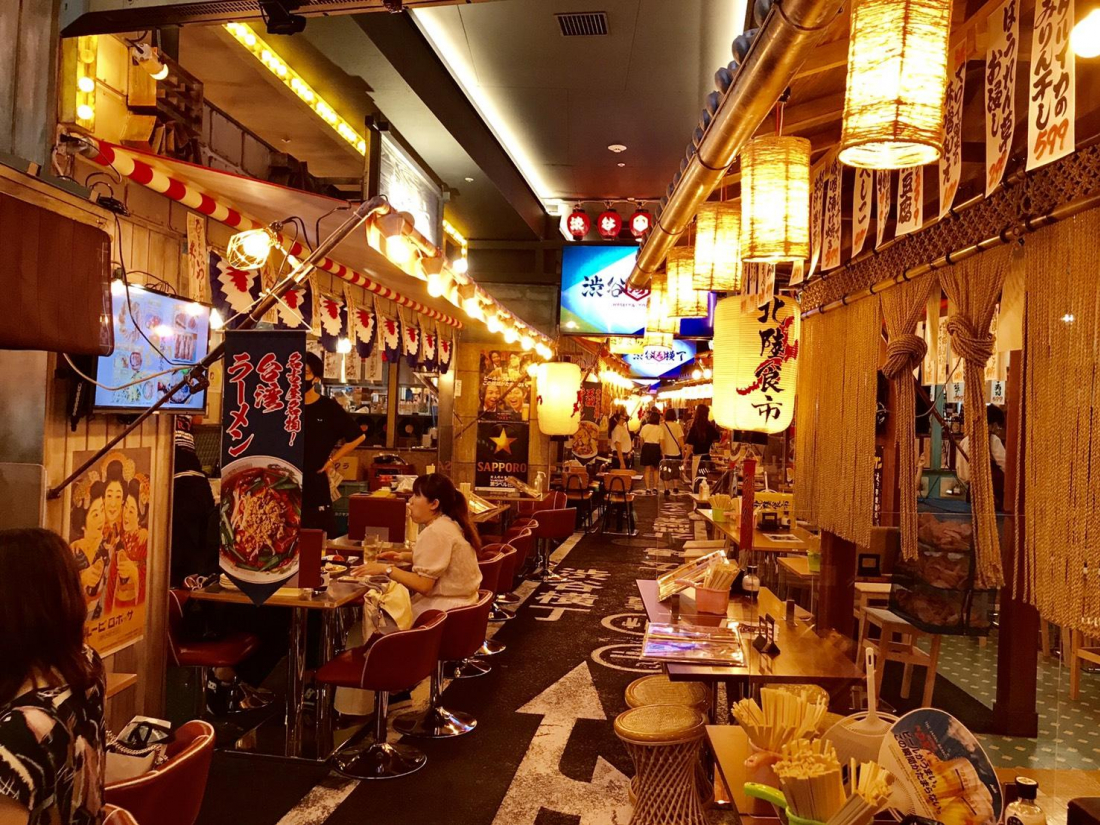 The whole setup is packed full of retro Japanese style, giving it some serious atmosphere. We loved the concept of offering all different kinds of Japanese food, and when COVID-19 no longer makes crowds such a risky experience, we'll probably stop by again to try some different regional specialties. 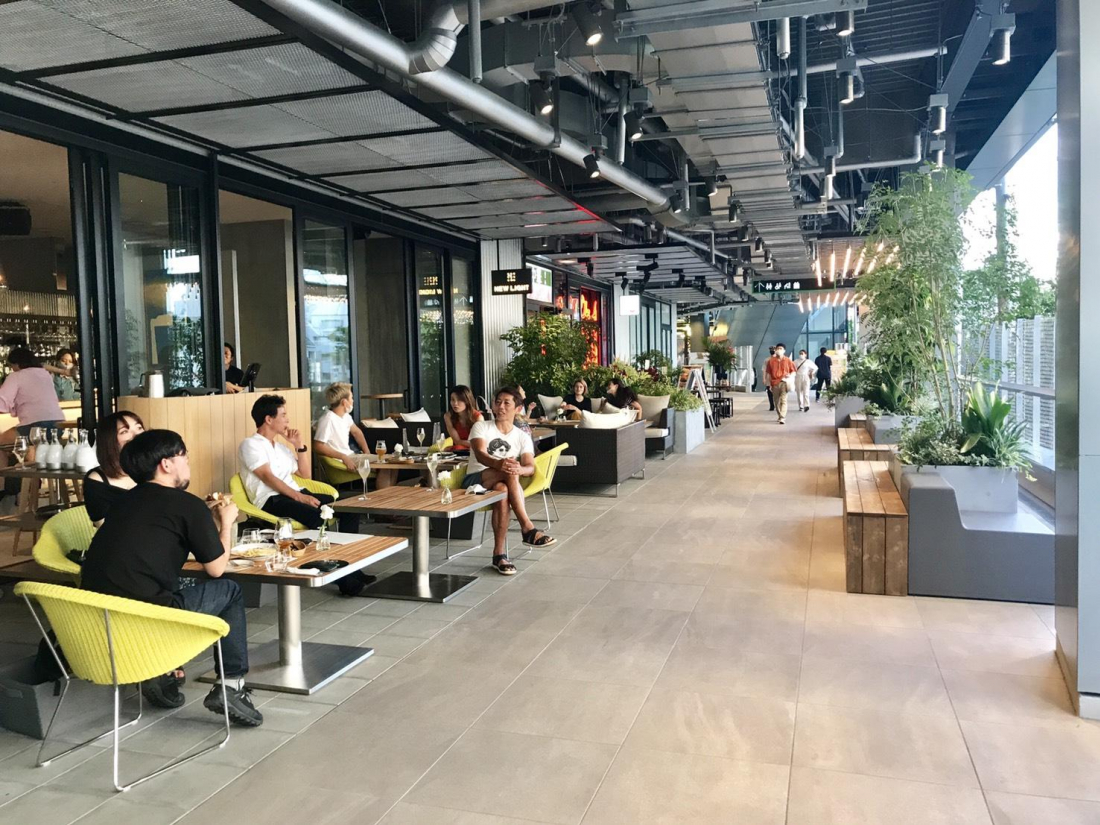 The north half of Miyashita Park is where you'll find slightly less casual spots, although many of these restaurants are still perfectly reasonable options for the average traveler. The outdoor seating here is more trendy and modern, and heading over during the afternoon hours for a late lunch would definitely be a pleasant way to while away the hours.

In the end the Japankuru team ended up eating at the Food Hall, a food court on the third floor, which we're pretty sure is going to be popular with foreigners living long-term in Japan. Sure, travelers who want every meal to be a taste of Japan will probably eat at Shibuya Yokocho, but many long-term residents can't help but want a taste of foreign fast food every once in a while. Sure, the food court has a McDonalds, but more importantly it also has Maguro Market (a poke and Hawaiian-style sushi joint), Taco Bell, and Panda Express. Those final two only have a handful of shops in Japan, so this convenient Shibuya location is definitely going to draw crowds. 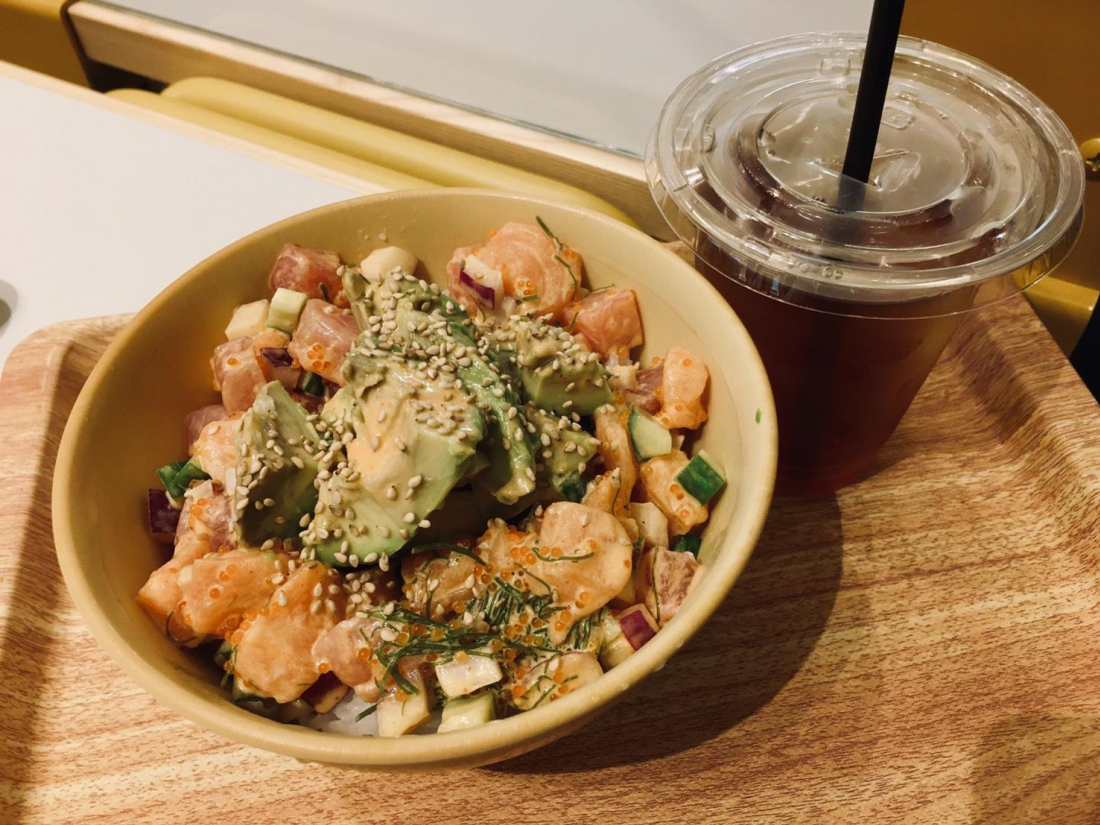 We got poke! It wasn't bad, but we all agreed it was a little under-sauced. Try asking for extra, maybe? 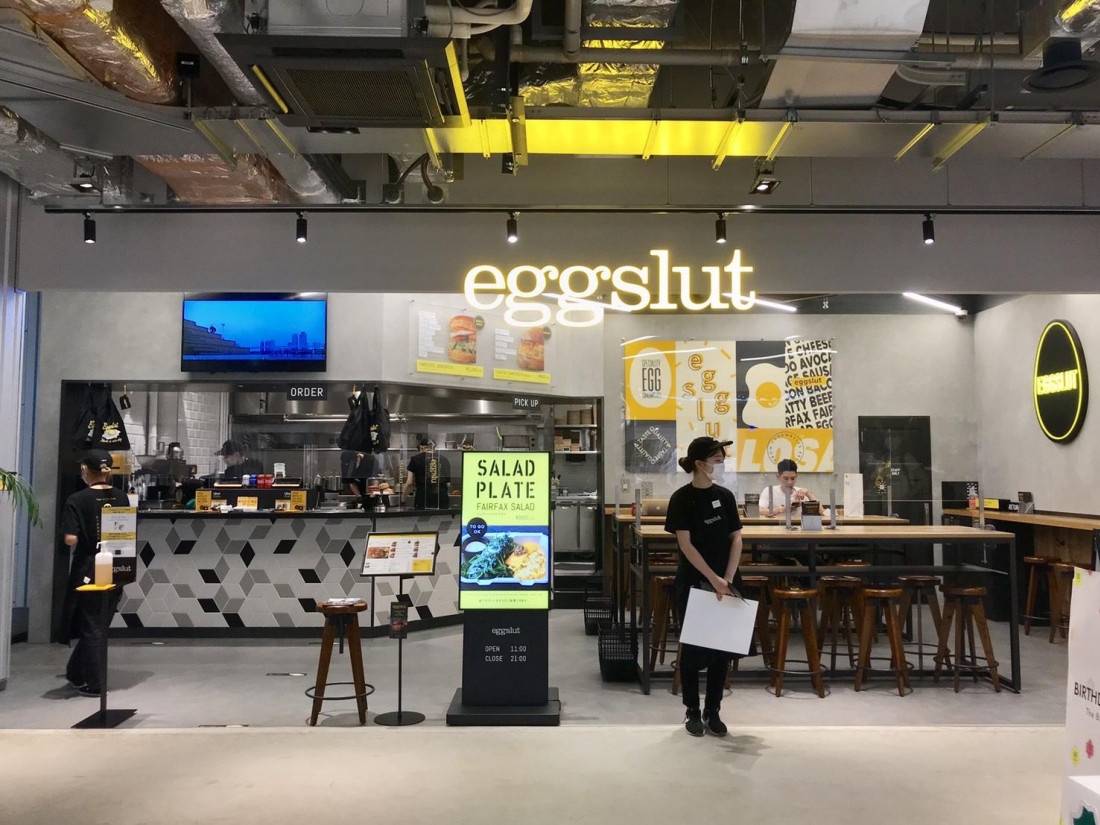 There's a new Eggslut, too! Considering how packed the Shinjuku shop has been, the empty seats here were a little shocking, but we know this one will be packed in no time, too. 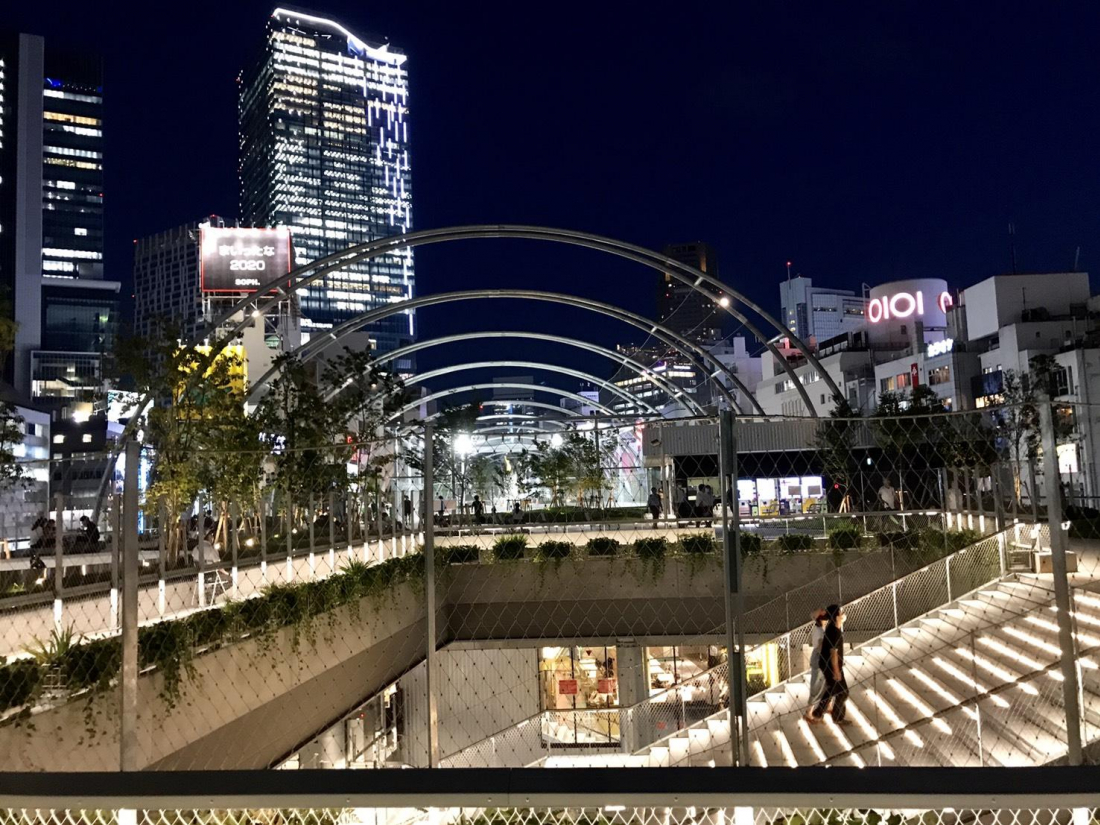 Time to head home! Altogether, the COVID-19 outbreak and the subsequent limit on the number of people in Miyashita Park made this an interesting experience. It was certainly nice being able to shop without constantly worrying about crowds (which are frustrating even when there's no pandemic going on), but one friendly shopkeeper bemoaned the lack of customers, telling us "there's just no way all the shops here could stay in business if things go on like this forever..." Of course, there's no easy way to solve that problem, so we can only hope the number of new infections all over the world will soon drop to zero. In the meantime, the limited entrance and plentiful hand sanitizer are a start.

Whenever your next trip to Shibuya is, we'd definitely recommend stopping by Miyashita Park, if only to check out the cool architecture and rooftop park! And let us know how it goesーyou can send the Japankuru team a message, and follow us for more info and updates from Japan, on twitter, instagram, and facebook.