11 Kinds of Japanese Noodles & How They're Unique (Uniquely Delicious!)

11 Kinds of Japanese Noodles & How They're Unique (Uniquely Delicious!)

Japanese noodles you know, Japanese noodles you don't know, and delicious ways to eat them all.
When it comes to Japanese noodles, we've all enjoyed a satisfyingly salty bowl of instant ramen before, and more authentic fresh ramen has been finding its ways onto restaurant tables around the world in recent days. But a pile of ramen noodles in a hot dish of savory broth is just one of many noodle-based options in Japan, including noodly varieties both similar in size and shape, and ones quite different. Starting with internationally popular types and finishing with some a bit rarer, here are just a portion of the noodles you can get in Japan, including a few dishes perfect for warm summer months! Dig in!
🍜 Ramen-y Noodles 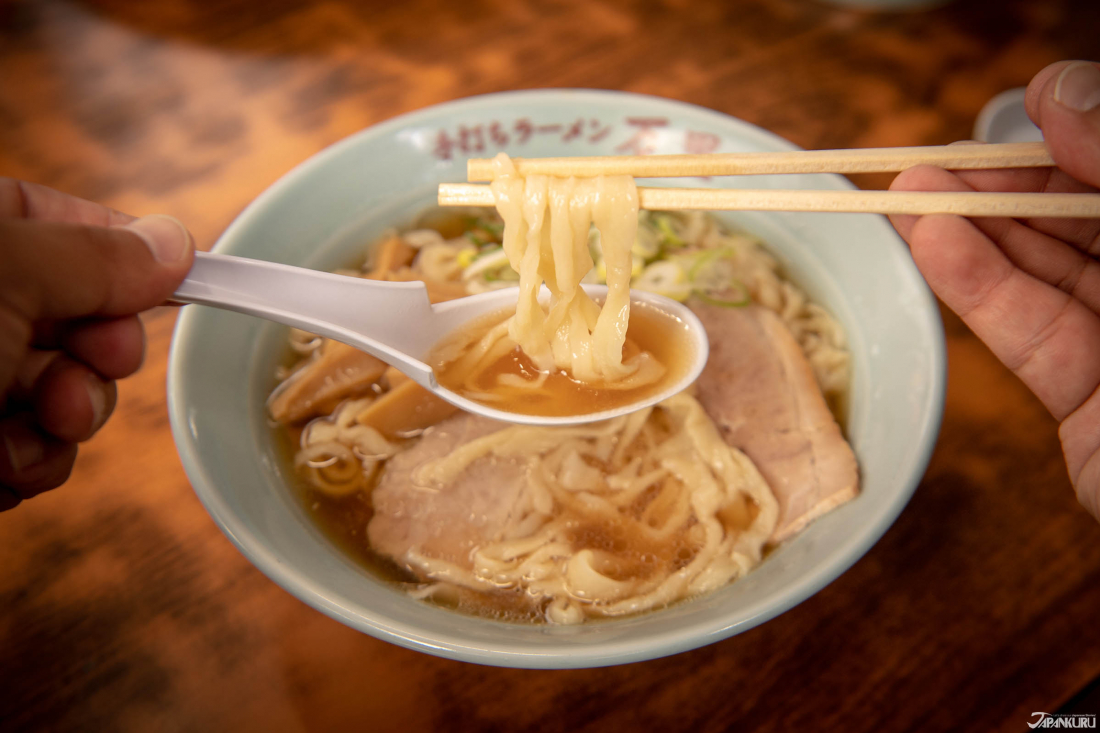 Are you a tonkotsu (豚骨) fanatic who loves Hakata ramen, or more interested in the rare flavors of pufferfish (fugu, ふぐ) ramen? Whatever your preference, if you're interested in Japanese food, you're definitely familiar with ramen! Smooth, thin noodles made from wheat flour―ramen noodles can vary a little in size, and come in wavy or straight varieties, but they share a distinctly satisfying texture that the world can't resist. However, despite the fact that ramen shops are found in every corner of Japan, ramen isn't actually Japanese in origin. To this day, Japanese people refer to ramen as Chinese food! They've certainly made it their own, though, going so far as to cook up and sell bright blue ramen (and pink ramen too). The ramen in the picture uses hand-made noodles, available in a popular shop in Tochigi. 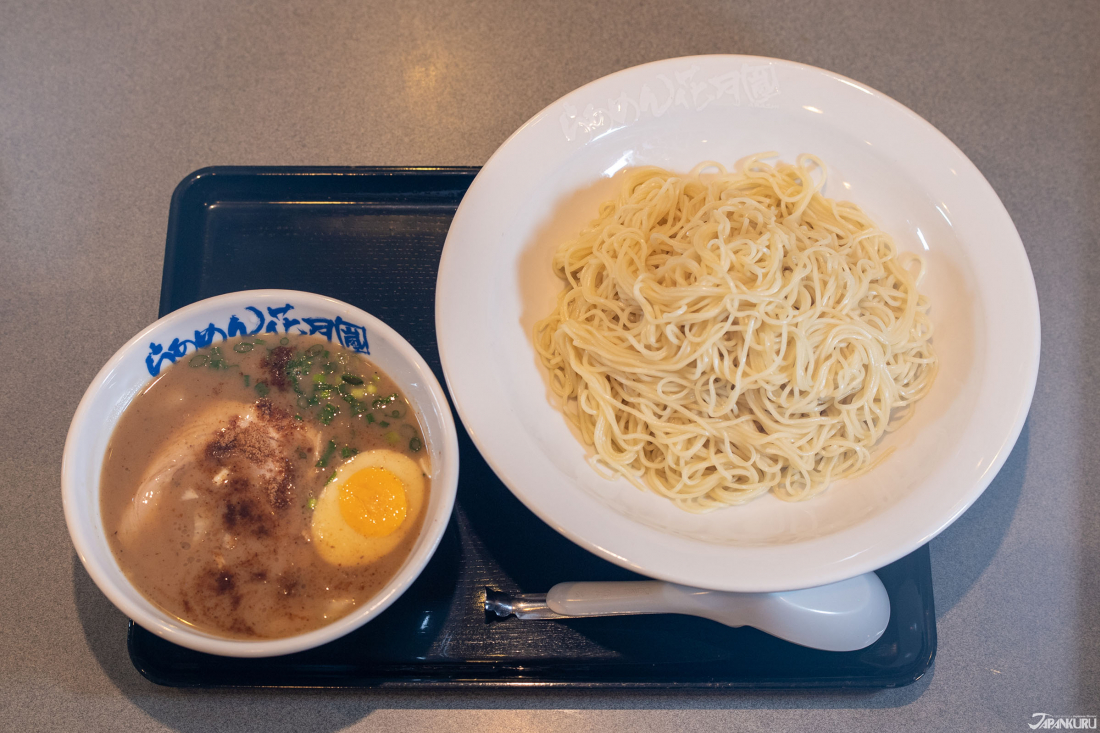 A common complaint among Japanese foodies is that ramen noodles will "stretch" when they sit too long in the broth, overcooking and losing their firm bite. Perhaps that's one reason why tsukemen, ramen served on a dish and then dipped in broth directly before eating, are such a popular option! Usually the noodles themselves are the same as ramen noodles, but the way they're presented makes it a different kind of dish, and a chilled dipping sauce can turn them into the perfect ramen choice for summer. (Try this particular dish of pork and fish broth tsukemen at Ramen Kagetsu Arashi.)

If you're thinking "oh I've heard of soba," well, aburasoba ≠ soba! Although the standard word for noodles in Japanese is "men" (麺), "soba" is sometimes used too, referring to all kinds of noodles and not just the buckwheat soba we sometimes see overseas. On menus in Japan, standard ramen is sometimes called "chuka soba" (中華そば), which literally means "Chinese noodles." Aburasoba, on the other hand, is a bit like ramen without the soup. The added toppings and sauces make it a little different from both brothy ramen and tsukemen. (This flavorful bowl was from Darumanome.) 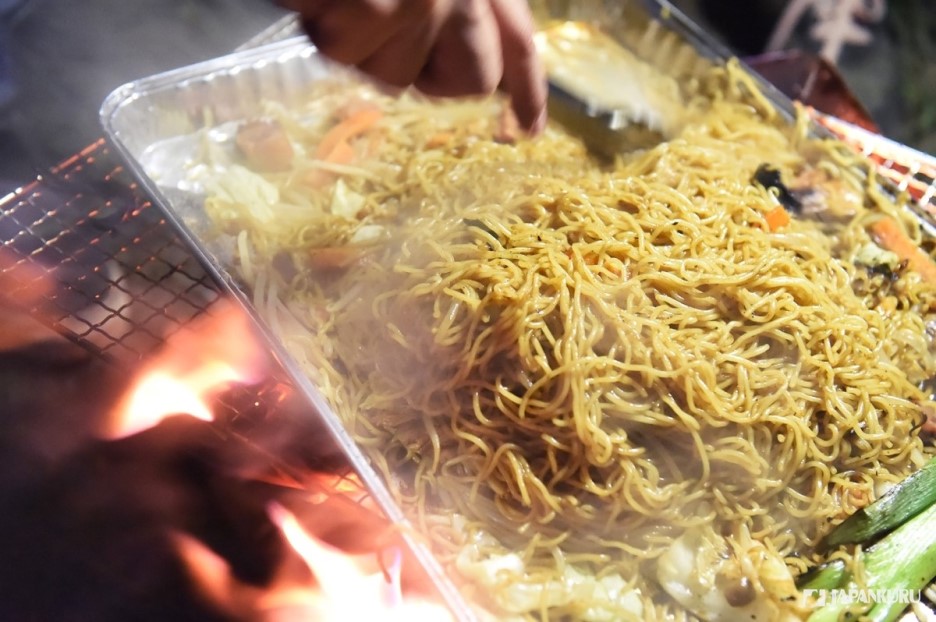 Technically, ramen noodles and yakisoba noodles aren't the same, but they're both "Chinese noodles" in Japan, making them fairly similar. The noodles in yakisoba aren't boiled, though, but stir-fried with vegetables and often some thin cuts of pork. The sauce generally used on yakisoba gives it a distinct flavor, and the simplicity of the dish (with its addictive flavor) makes it a popular dish for the masses. You'll often see it for sale from food stalls at Japanese summer festivals and fireworks displays, or find it at a get together like this Japankuru team camping trip at Mt. Fuji.
🍜 Soba & Udon 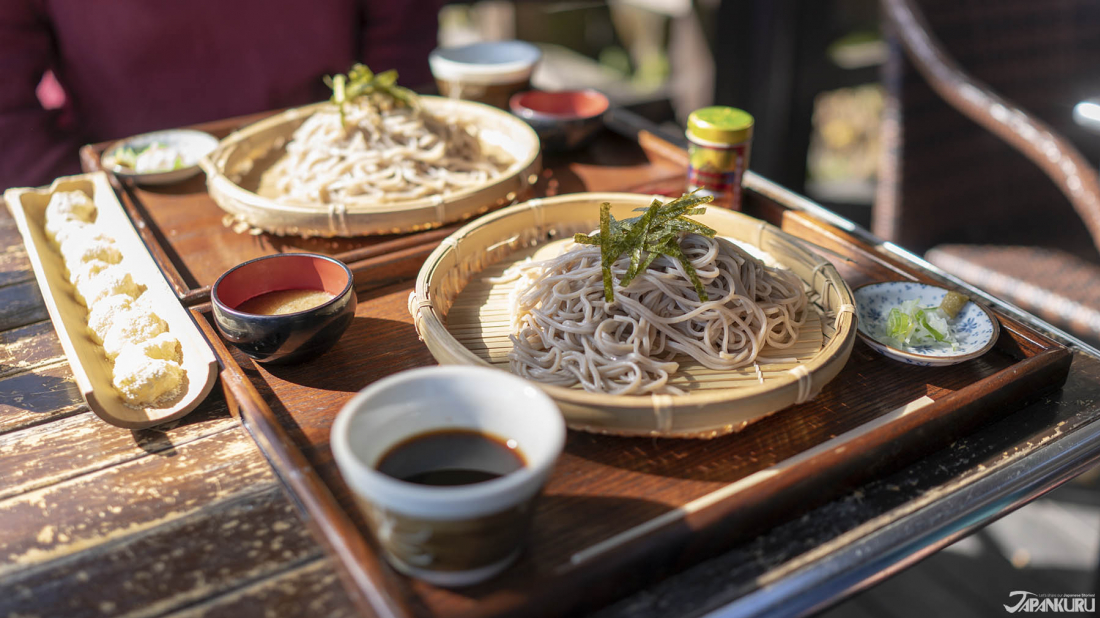 I can only hope that I wasn't the only one out there who spent years of my life believing that buckwheat was like durum wheat or spelt―the same basic plant as normal wheat, but perhaps a different variety. It turns out, though, that buckwheat is a completely different kind of plant from normal wheat, and not a grain at all! (It's actually closely related to rhubarb. Weird.)

This is all important because buckwheat is what gives soba noodles their distinctive greyish color and stiffer, slightly more brittle texture. The texture is clear when you take a bite, but the unique qualities are especially obvious if you leave different kinds of noodles in soup for too long―ramen (with all its elastic wheat gluten) will bloat and stretch, but soba noodles will start to soften and break up. But while this explanation doesn't sound particularly appealing, there's a reason why soba has been popular for hundreds of years, and people love the distinct flavor. Whether soba is served chilled with a dipping sauce (tsuyu, つゆ) like this soba in Nagano... 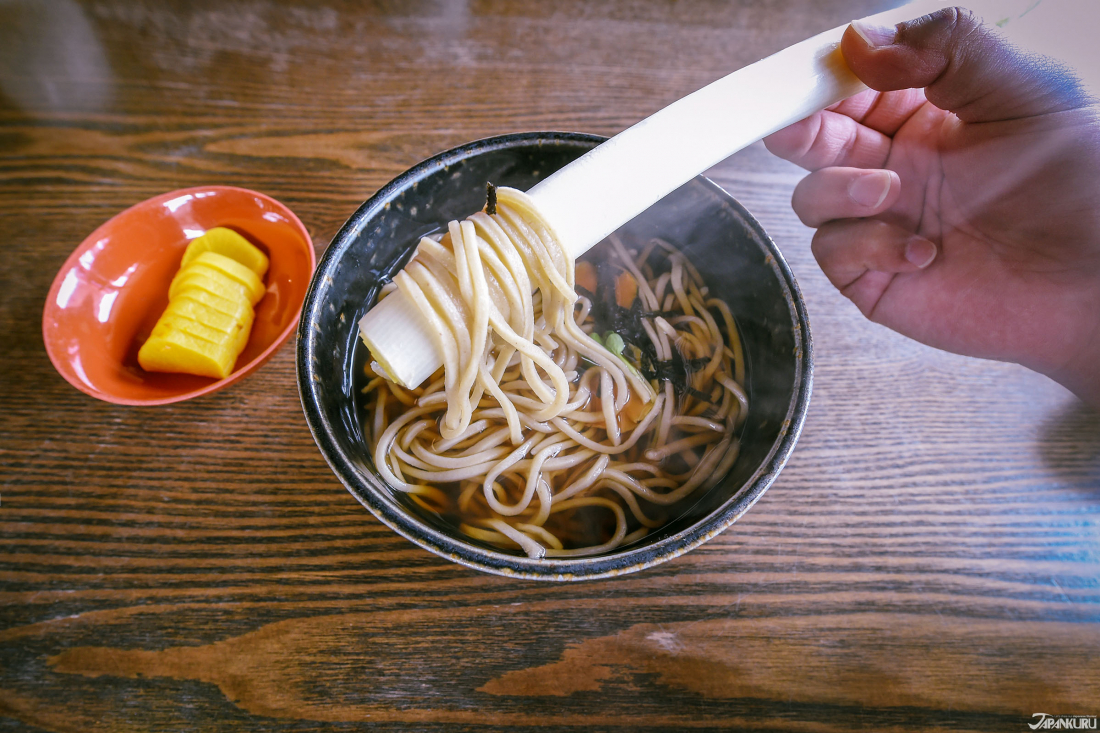 ...Or hot, in a simple dashi broth. (Usually you eat soba with chopsticks, but in Ouchi-juku you eat it with a big old green onion!) 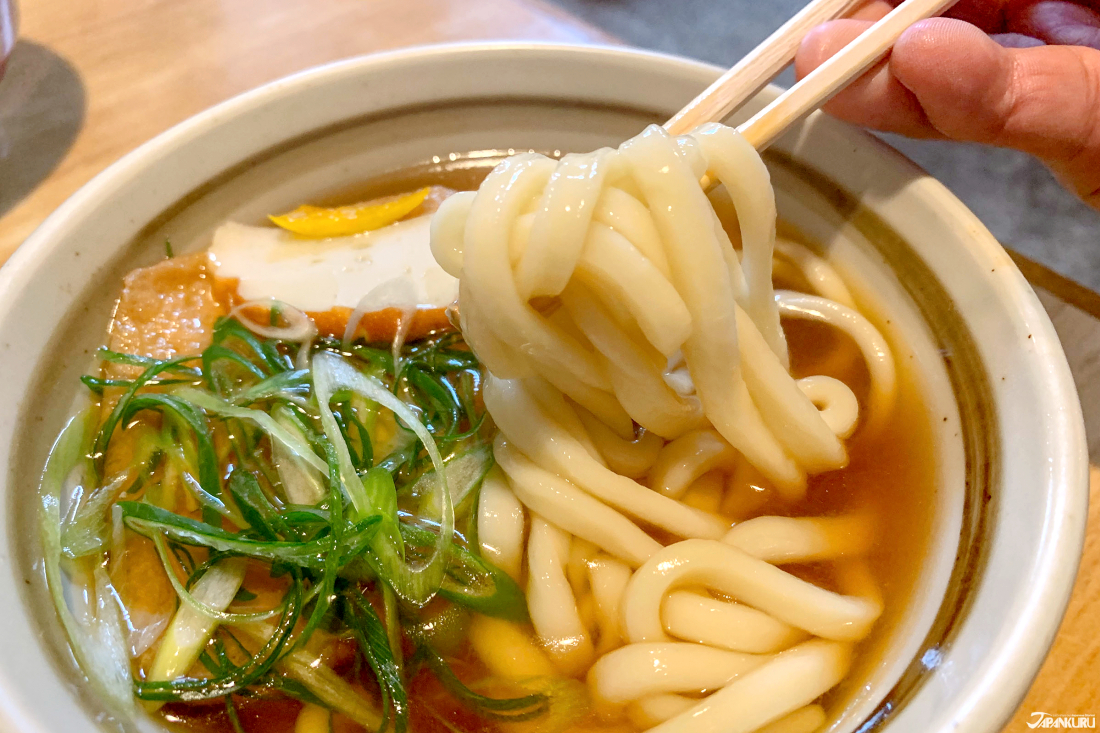 Udon is nothing like soba, so why is it in the same category? Well, udon is standardly found in soba shops, generally served in all the same ways! There are some udon specialty restaurants, but udon often complements soba at the same restaurant, offering totally different dishes using the same broths and toppings.

Still, while udon is so different from soba because of ingredients, it's also a totally different experience from ramen, despite being made with the same wheat flour. The noodles are thick and chewy, cut into a square profile and served simply in clear broth, like this classic kitsune udon and its lightly sweet fried tofu. Or you could always try monster ippon udon, frighteningly thick udon unlike any other.
🍜 Shirataki 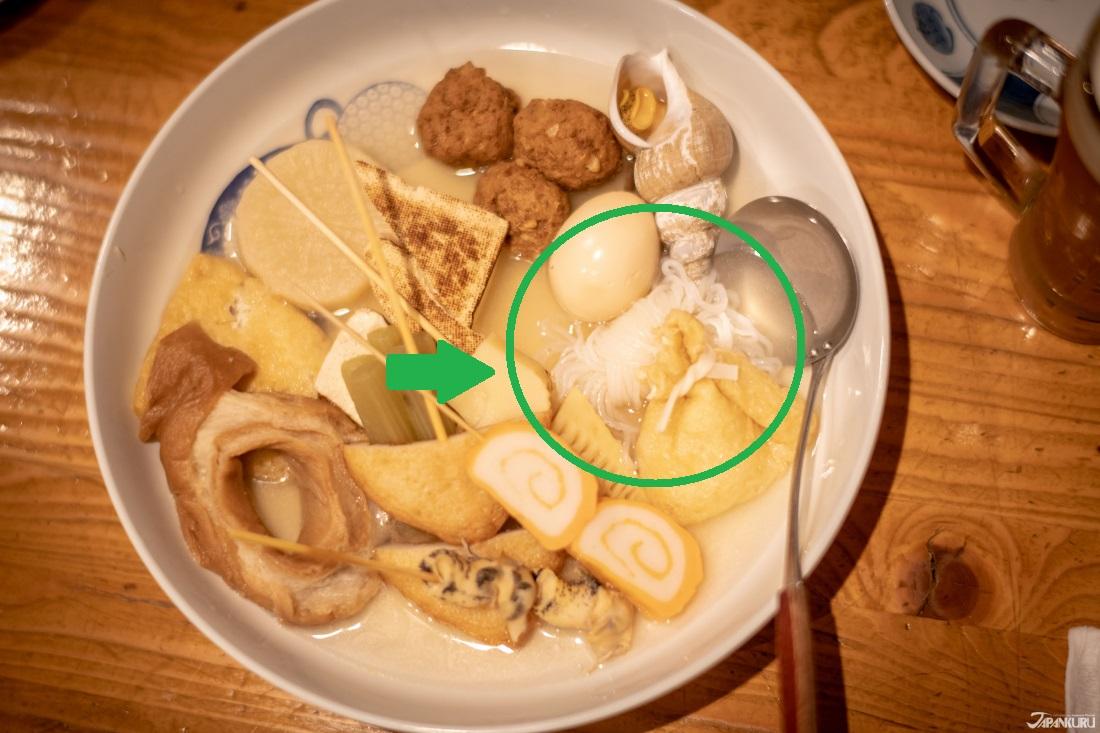 Many Japanese people would be a bit surprised at the inclusion of shirataki on this list of Japanese noodles, but thanks to their burgeoning popularity overseas, shirataki seems like an important inclusion! Because, while international packaging often suggests cooking these noodles like Italian pasta, that's a wholly new concept in Japan. Shirataki noodles are made of Japanese konnyaku/konjac root (糸蒟蒻) (also found in the Mos Burger Green Burger), and the shape is just one of a few preparations of the same ingredient, used in a few traditional Japanese dishes. Konnyaku is most often found as one of many stewed ingredients in oden (おでん), below, or cooked up in a flavorful Japanese hot pot.
🍜 Somen-y Noodles

Now we're starting to leave known territory, starting with somen, a favorite summer treat throughout Japan. It's no surprise that somen (thin, fragile little wheat noodles) haven't made it overseas, since they're often eaten at home―boiled, chilled in ample cold water, and then served with a tsuyu dipping sauce. Sometimes, however, this simple dish is taken to the next level with "nagashi somen" (流しそうめん). Instead of just serving the chilled noodles in a normal dish, nagashi somen uses flowing water and bamboo pipes (or sometimes specially built machines) to keep the noodles swirling through cold water before being eaten. 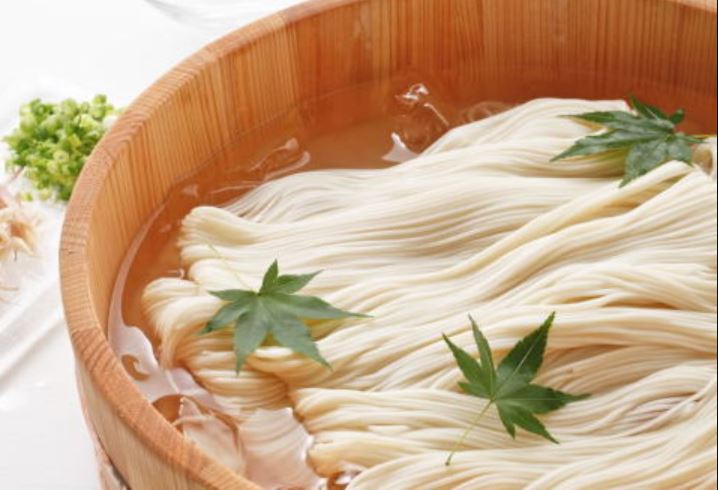 Hiyamugi are like a slightly thicker version of somen, and they're even less well-known, especially outside of Japan!
🍜 Regional Specialties
Mostly found in their places of origin, these regional noodle varieties are inherently harder to find―but definitely worth the trouble! 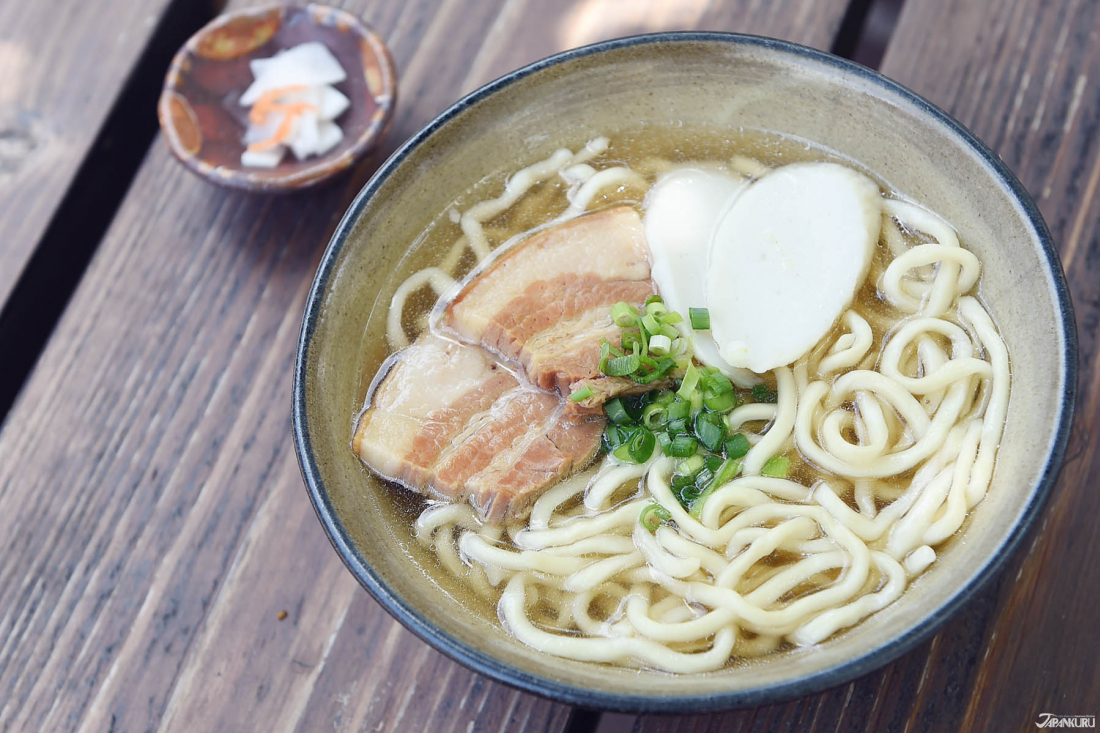 It sounds like buckwheat soba, looks like hearty udon, but has its own unique flavor profile: it's Okinawa soba, from Japan's chain of beachy southern islands. Another dish that uses the word "soba" just to mean noodles (and not buckwheat), Okinawa soba noodles are similar to udon, but generally a little slimmer, with a slightly more ramen-like texture and accompanying broth. The soup is generally made with a base of Japanese bonito dashi and pork broth, and toppings continue to go heavy on the pork, whether it be belly, trotters, or even snouts! 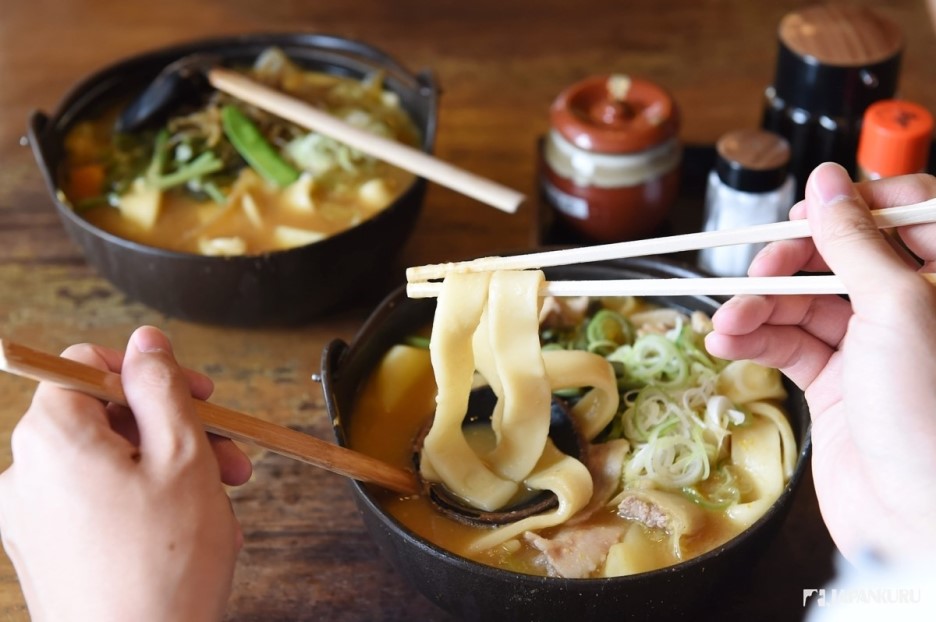 Finally, we're going from Okinawa soba, found on warm southern islands, to hoto noodles, a hearty option perfect for warming you up during a cold-weather visit to Yamanashi Prefecture. Unless you've been to Yamanashi, there's a good chance you've never even heard of these! Texturely, hoto noodles aren't actually such a huge step away from the wheat-based chew of Okinawa soba, but their broad shape and rich broth make for a totally different eating experience. (If you happen to be visiting Oita Prefecture instead, check out their dangojiru (団子汁), a soup with similar wide noodles!)

Which noodles are you craving now?

Have we whet your appetite? Let the Japankuru team know if we taught you about any new Japanese noodle dishes, and tell us which noodles you wish you were eating right now, on twitter, instagram, and facebook!